On Sunday morning, 28th July, 2013, Ian and I had another early start.  Wide awake and out of bed at 5.30 a.m. for another one of Ian’s fine cooked breakfast consisting of eggs and bacon and fresh home made bread.  It had been raining overnight, despite the weather forecast saying that today was mean’t to be sunny.

So we headed out, travelling north to un-named summit, VK5/ SE-006.  The weather did not look good, and the rain was quite heavy.  But we did have some hope, because as we looked to the north east the skies were clear.  As it turned out the rain cleared and there was a spectacular sunrise. 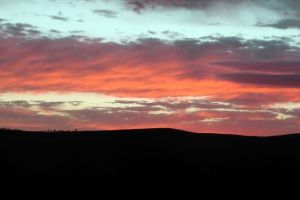 We travelled north along the Barrier Highway, through the little town of Mount Bryan, and then passed the imposing Mount Bryan summit, which is South Australia’s third highest peak.  Mount Bryan was to be our afternoon activation.

The VK5/ SE-006 summit is situated about 10 kms west of the little town of Whyte Yarcowie on the barrier Highway.  Access to the summit is via private property.

Whyte Yarcowie was surveyed in 1875 and the name Yarcowie is said to be aboriginal for ‘wide water”. “Whyte” was added to the name in 1929, after an early pastoralist John Whyte.  Alexander McCulloch was the first to pioneer the area and his name is given to McCulloch Square.  The railway station was built in 1880 and Whyte Yarcowie was a good example of a bustling railway town in the early 1900s. The town had a flour mill, schools, hotels and an Anglican Church which, at the time, was reported to be the smallest in Australia. 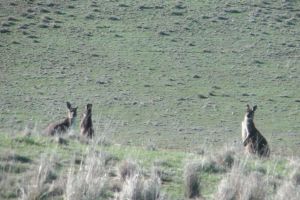 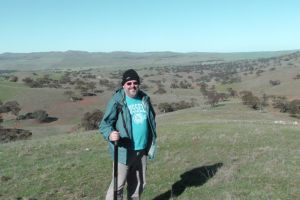 My first QSO of the morning was a Summit to Summit contact with Mike VK3XL who was portable on Mount Johnston, VK3/ VG-122 (5/6 both ways).  Dave VK3VCE then called in, followed by Peter VK3PF.  My fourth contact was also a Summit to Summit QSO with Phil VK3BHR who was portable on Mount Kooyoora, VK3/ VU-007.  This was followed by the regular crowd of Chasers, all of whom ahd very good signals. 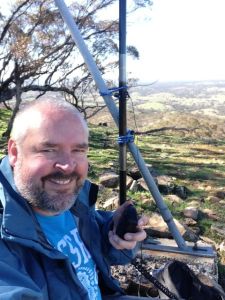 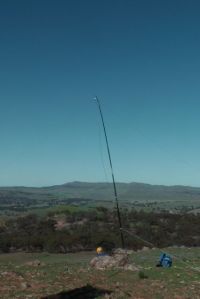 Time to head down and off to the next summit.  The big climb at Mount Bryan.

I have posted a video on You Tube of the activation.