Thankyou to all of the activators and thanks to YO3JW the Awards Manager. 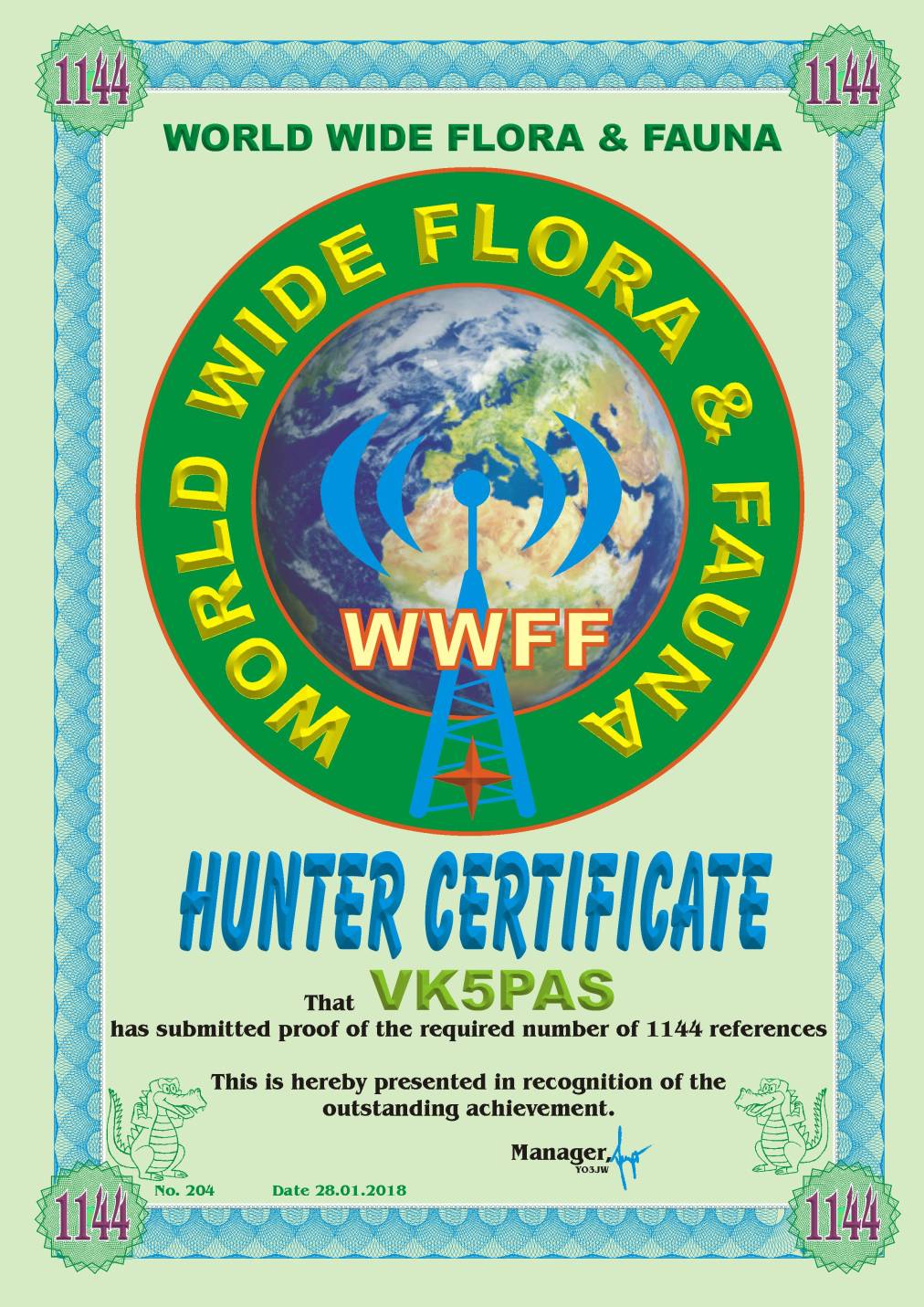 Yesterday (Friday 26th January 2018) was Australia Day, which is the official National Day of Australia.  It is celebrated annually on the 26th January and marks the anniversary of the 1788 arrival of the First Fleet of British ships at Port Jackson, New South Wales and the raising of the Flag of Great Britain at Sydney Cove by Governor Arthur Phillip.

And each Australia Day, amateur radio operators in Australia are permitted to replace the VK prefix with the AX prefix.  Down here in Australia we can only do this three times a year: for Australia Day in January, ANZAC Day in April, and World Telecommunications Day in May.  So it is a relatively rare event.

Above:- My special AX5PAS QSL card for Australia Day

I was on Afternoon Shift on Thursday evening and had also been recalled during the wee hours of the morning, so my intended early start on Friday morning did not eventuate.  I had to work afternoon shift again on Friday, so I decided to head out to a local park to operate as AX5PAS for a few hours before heading off to work.  I chose the Kinchina Conservation Park 5CP-277 & VKFF-1764 which is about 40 km east of my home, and about 40 km east of Adelaide.

I have activated Kinchina on two previous occasions, and have qualified the park for the World Wide Flora Fauna (WWFF) program.  Details on those activations and full information and history of the park can be found by clicking on the following links…..

Kinchina Conservation Park is a relative ‘new’ park.  It was only gazetted in September 2016.  Kinchina is quite large, being 414 hectares in size.  The park protects grassy woodland communities considered of high conservation significance.  The park was named for the rail siding where local Monarto Granite was loaded to be sent to Adelaide by Jessie and Charles Duncan from 1879.  This granite was used in many buildings including Colonel Light’s statue, St Peters Cathedral stepgs, Electra House on King William Street and for kerbing in Adelaide’s central business district. 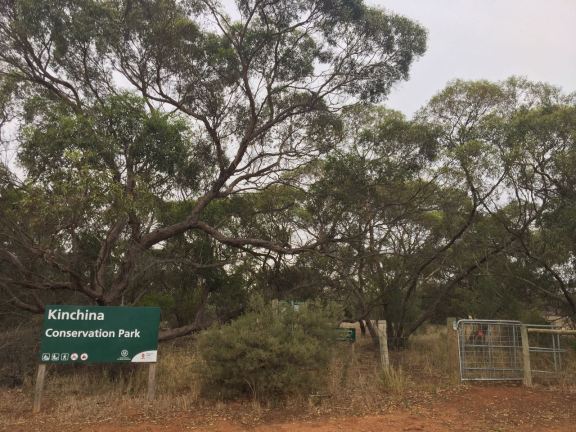 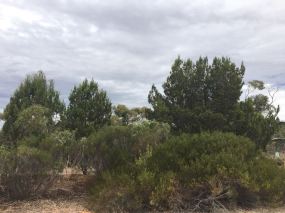 It was quite a warm morning, around the high 20’s, but it was also wet.  There were consistent light showers, making conditions very humid.  I set up under the shade of some gum trees in the western section of the park. I kicked off the activation by calling CQ on 7.144.  This was answered by Matt VK1MA in Canberra, who had a good strong 5/8 signal.  This was followed by Gerard AX2IO/p who was in the Dalrymple-Hay Nature Reserve VKFF-1921.  Gerard kindly spotted me on parksnpeaks.  Thanks Gerard.

Band conditions were very depressed and signals were well down compared to usual.  I logged a total of 24 stations on 40m from VK1, VK2, VK3, VK4, VK5, and VK7.  This included another two Park to Park contacts.  The first being with Mark VK4SMA/p in the D’Aguilar National Park  VKFF-0129, and then Giles VK5GK/p in the Flinders Ranges National Park VKFF-0176.  Giles was actually on his honeymoon.  He obviously had a very understanding wife.

I then moved to the 20m band where I found Rob VK4AAC/p on 14.310, calling CQ from the Tallaganda National Park VKFF-0474, with a nice 5/7 signal.  After logging Rob I moved up the band to 14.315 and self spotted on parksnpeaks and started calling CQ.  I logged a total of 9 stations from VK1, VK2, VK3, VK4, and VK7.  This included two more Park to Park contacts, with Mark VK4SMA/p in the D’Aguilar National Park  VKFF-0129, and Gerard VK2JNG/p in the Guy Fawkes River National Park VKFF-0224.

I was set up very close to the main Adelaide-Melbourne railway corridor, and a few times during the activation I needed to take a break as the noisy freight trains passed by me. 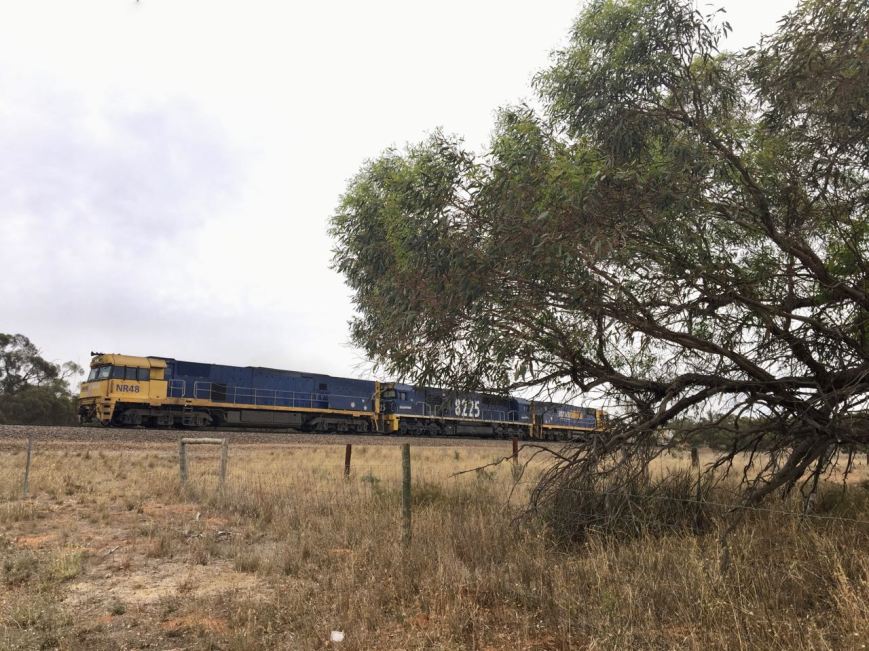 I also had to deploy the bothy bag on a few occasions to protect both myself and the radio gear from the showers.  It was a warm and humid day and it was particularly muggy under the bothy bag.

I then moved to the 80m band hoping to log a few of the locals, as it was clear the 40m band and 20m band were not going to be fruitful for VK5 contacts.  My first contact on 80m was with my wife Marija VK5FMAZ/AX5FMAZ, followed by Adrian VK5FANA on the Yorke Peninsula, and then Allen VK3ARH in western Victoria.  But sadly they were my only callers on that band, so I headed back to 40m where I logged another Park to Park contact, this time with Peter AX3PF/p who was in the Churchill National Park VKFF-0621.

I then moved up to 7.150 where I spoke with Brett AX3FLCS/p who was activating the Taradale Nature Conservation Reserve VKFF-2205.  But band conditions were still quite poor, and I logged just 3 more stations.  I then tuned across the 40m band and found Sam VK2GPL/p calling CQ on 7.090 from SOTA peak Mount Trickett VK2/ CT-002.

To complete the activation I put out a few CQ calls on 21.244 and logged three stations: Mike VK6MB/p in Western Australia, John VK4TJ in Queensland, and Con VK7HCK in Tasmania.

I packed up and headed back home for a quick shower and then off to work.  I had a total of 48 contacts in the log including 8 Park to Park QSOs.

Fortunately my only scaly friend for the activation was a Shingleback Lizard.

I worked the following stations on 40m SSB:

Each year the World Wide Flora Fauna (WWFF) program issues certificates to activators who have made it into the Top 44, with respect to the number of QSOs made during activations.

I am a long long way from the top.  The Top Activator (QSOs) was SP5UUD in Poland with an amazing 61,105 QSOs from 505 activations.  That equates to around 121 QSOs per activation.

Thankyou to everyone who called me during my 2017 activations and thankyou to the Awards Manager, YO3JW for the certificate. 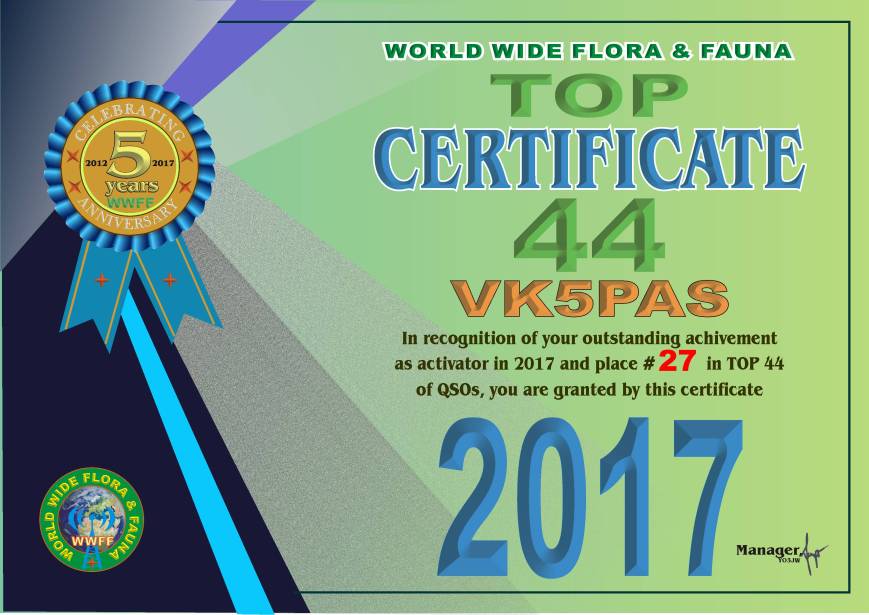 I have finalised the results for the 2017 VKFF Photographic Competition.

A total of 17 amateurs took the time to cast their vote/s. It is a shame that more did not take part.

1st place – SHARED by Neil VK4HNS & Paul VK5PAS (will share a $50.00 voucher from Jaycar and also receive a winners certificate) 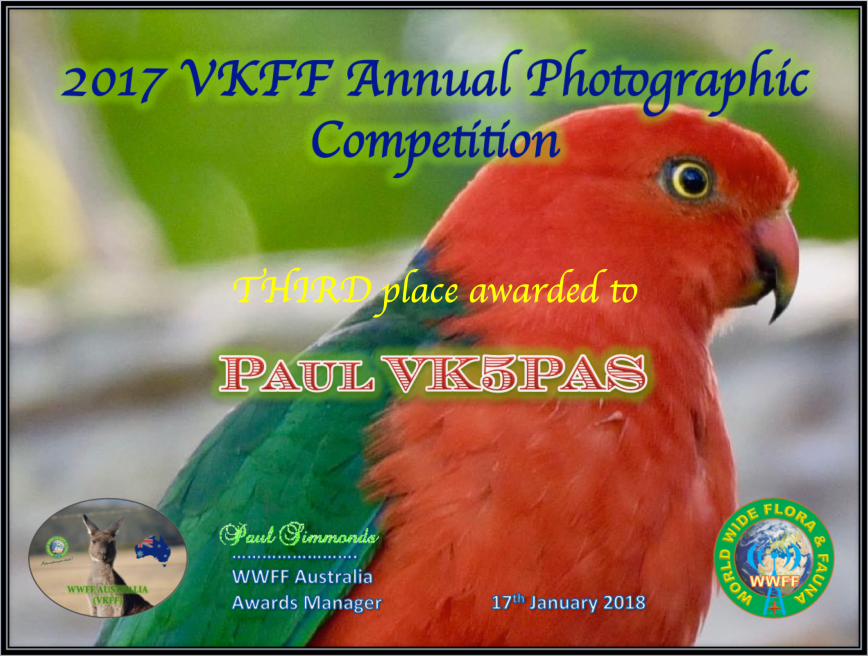 More info, including photos, etc, can be found on the WWFF Australia website at…..

Again, thanks to everyone who took part.

And a BIG THANKS to JAYCAR, who again sponsored the event.

Many thanks to Tony VK3XV the KRMNPA Awards Manager, and thanks to everyone who has called me during those activations.

More info on the Top Operators can be found on the wwff website at…..

Thankyou to everyone who took part in the VKFF program during 2017.

Today I qualified for my latest VKFF certificate in the World Wide Flora Fauna (WWFF) program.  It is issued for having worked 850 different VKFF reference areas.

Many thanks to all of the park activators.

This morning I received via email the Top 44 Activator certificate below. 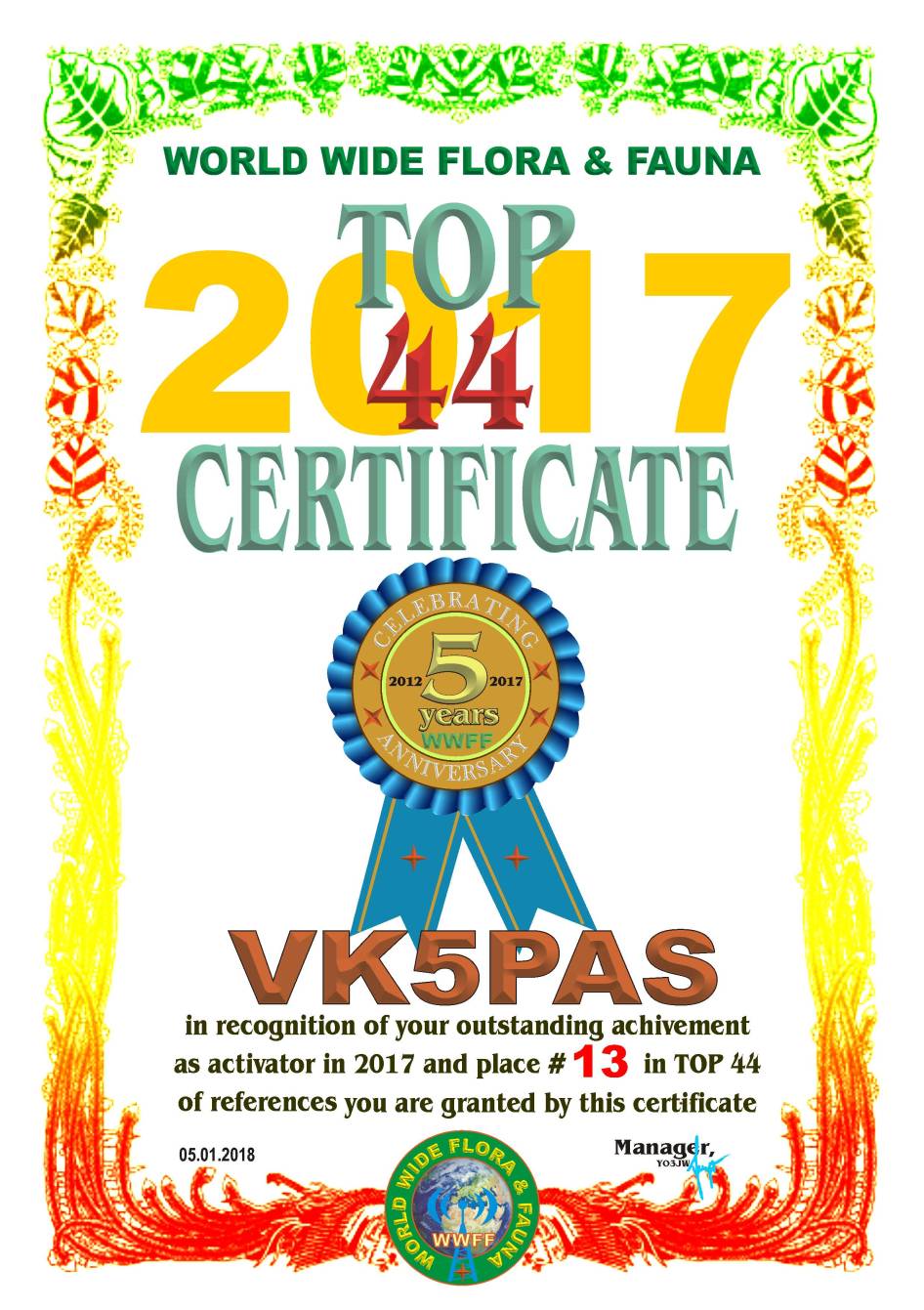 The Top 44 certificate is issued each year for the Top 44 activators in the world, and is based on activations where 44 QSOs are achieved.

I came 13th in the world with 90 activations.

The top activator in the world was SP5UUD with 505 activations. Now that is an achievement.

Thanks to YO3JW, the award Manager.

Today I received my latest award in the World Wide Flora Fauna (WWFF) program.  It is a National Award, issued by the Poland Flora & Fauna program (SPFF).  It is issued for having worked 40 different Polish (SPFF) references. The SPFF award certificates are obtained through WWFF Logsearch and by clicking on ‘National Awards’ on your Summary Statistics page.  The scroll down to SPFF.

The threshold was previously much lower with the SPFF awards, but at some stage (I believe around April 2016), the theshold was lifted.

Many thanks to the SPFF team for the award certificate.

More information on the SPFF certificates (diplomas) can be found on the SPFF website at…..

This evening I received this commemorative certificate from the Silesian Radio Amateur Group (SP9YFF) in POLAND.  It is issued for having worked SP9YFF whilst they were activating their 800th SPFF reference area. Many thanks to the Silesian Radio Amateur Group.