Yesterday in the mail I received the plaque below, issued for first place in the ‘Single Op All Band Low Power’ category of the 2019 Oceania DX Contest.

Many thanks to the Oceania DX Contest Committee and also the AHARS Committee for their sponsorship of the plaque. About a week ago I applied for the award certificate and received it today via email.

Thanks to Swa ON5SWA the Awards Manager.

More information can be found on the WWFF global website at….. 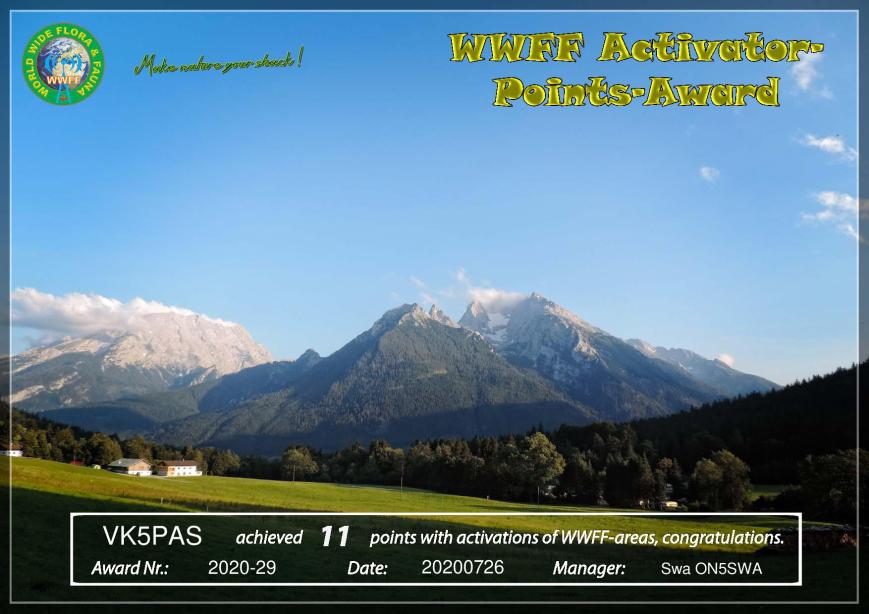 Late this afternoon (Sunday 19th July 2020) I activated the Cox Scrub Conservation Reserve VKFF-1701 which is located about 65 km south of Adelaide and about 8 km south of my home QTH, the town of Ashbourne. 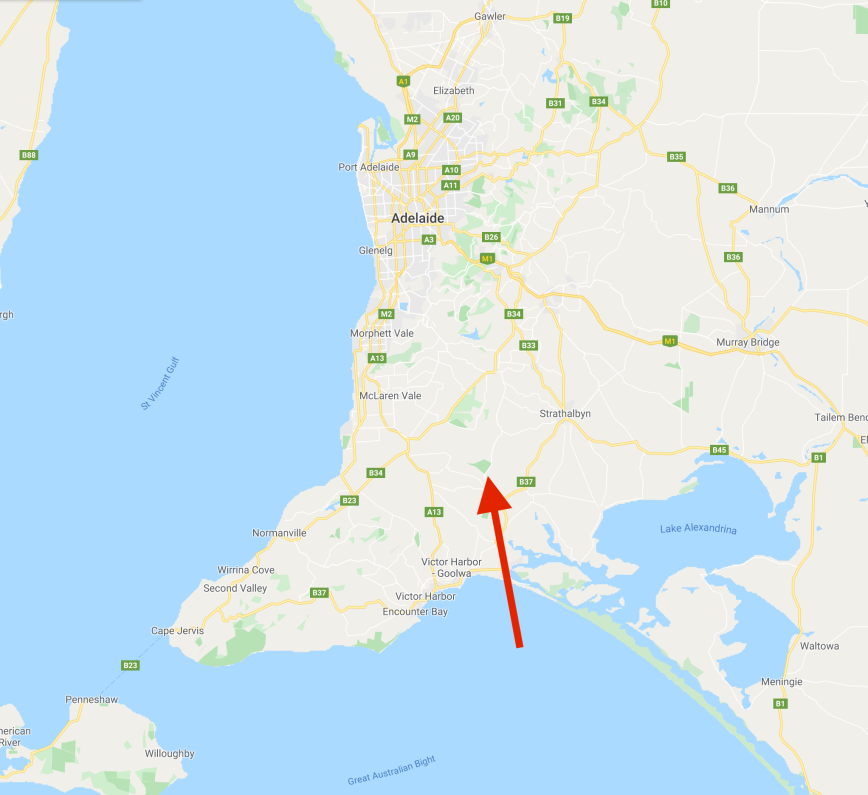 Above:- Map showing the location of the Cox Scrub Conservation Reserve, south of Adelaide.  Map courtesy of Google maps.

I have activated the Reserve on three previous occasions and have well and truly qualified it.  However, I decided to revisit the park as it is just a short distance from home.  It was to be only my fifth park activation for 2020.  A variety of reasons have conspired against me getting out into the field including the bushfires, COVID-19, work commitments, and moving QTH. The majority of the adjacent Conservation Park was previously owned by the late Mr. V. COX of Ashbourne, who preserved the area in a natural state for overwintering his honey bees.  In 1969 the land was purchased from Mr. COX on the condition that he was allowed to keep bees in the park.  This agreement was upheld until he passed away. 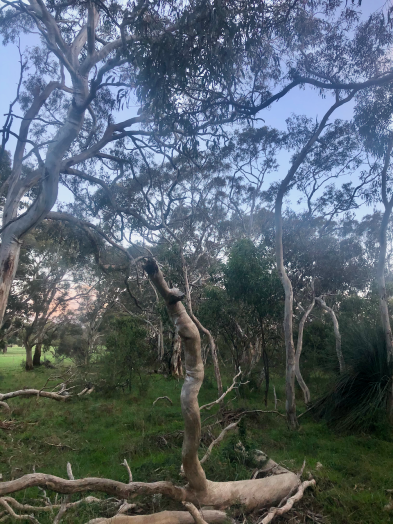 The Cox Scrub Conservation Park has an active Friends group who have a good website.  It can be located at…….

I set up in my normal operating spot, which was at the end of a 4WD track which runs off Bull Creek Road.  I ran the Yaesu FT-857d, 30 watts output, and 20/40/80m linked dipole for this activation. 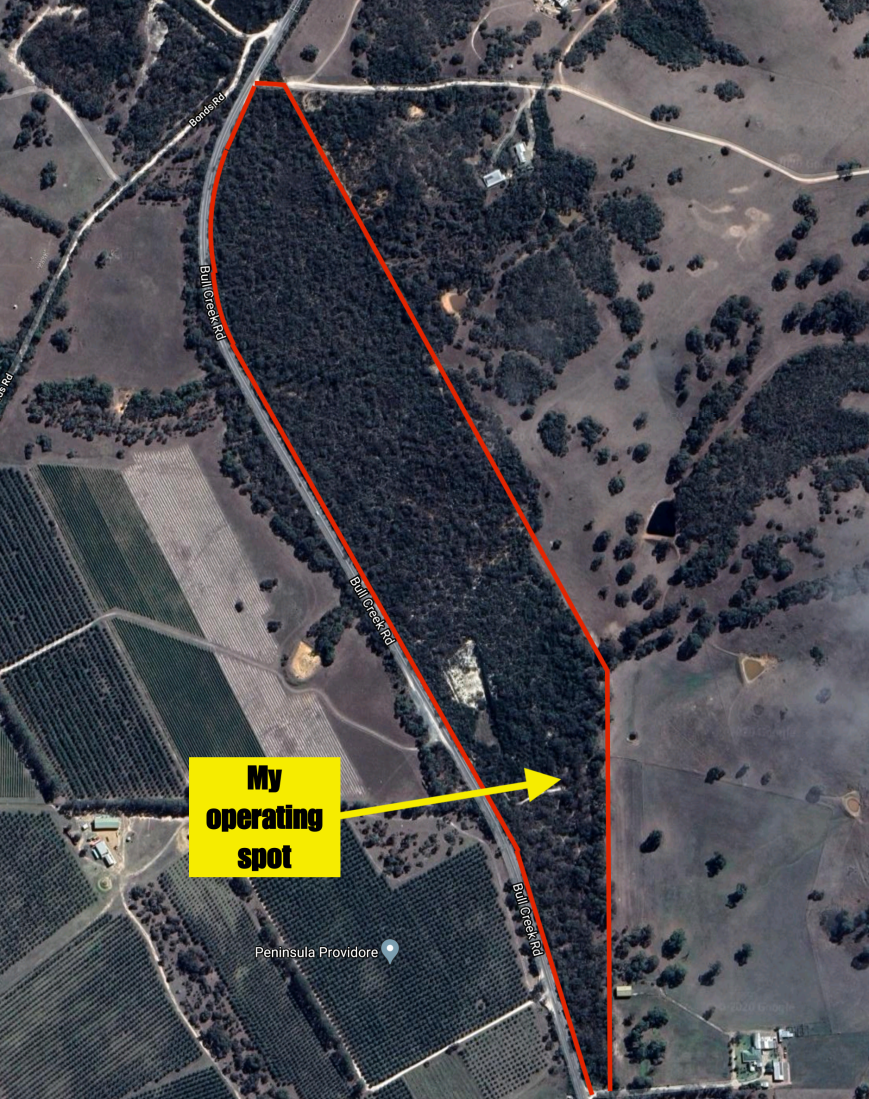 Above:- Aerial shot of the reserve showing my operating spot.  Image courtesy of Google maps

I kicked off the activation by asking if the frequency, 7.144, was in use.  I didn’t even get to start calling CQ, as Peter VK3ZPF came back to advise the frequency was clear.  So Peter was first in the log for this activation.  This was followed by Tony VK3YV, and then a Park to Park contact with Chris VK1CT/2 in the Mulligans Flat Nature Reserve VKFF-0855.

Contact number eleven was another Park to Park, this time with Gerard VK2IO/p who was in the Worimi Regional Park VKFF-1788.

I was about 20 contacts into the activation when I realised that I was transmitting with 10 watts PEP, as my wife Marija VK5FMAZ had previously been using the transceiver at home. 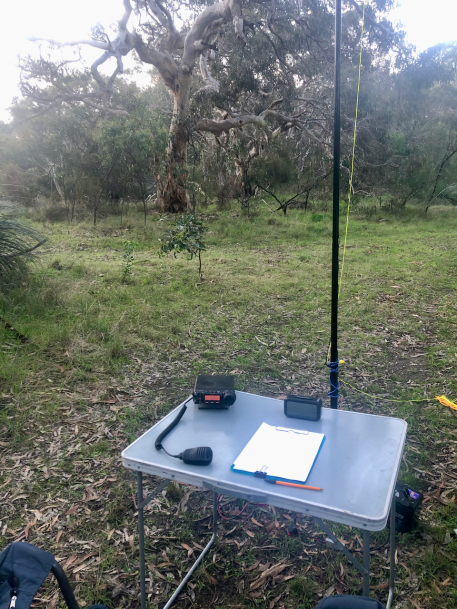 I then moved to the 80m band where I logged a total of 10 stations from VK2, VK3, VK4, and VK5.  Thanks to Allen VK3ARH and Peter VK3PF for their second call signs which helped me get over the line with 44 QSOs.

In the end, I logged a total of 49 stations in about 70 minutes.  Thanks to everyone who called.

Last night (Saturday 18th July 2020) I took part in the 2020 Trans Tasman Low Band Contest.  The aim of the contest is to encourage Low Band activity Trans-Tasman that is between VK and ZL.  Only contest bands 160, 80, and 40M are allowed with
SSB, CW and Digital (RTTY OR PSK).

More information can be found on the WIA website at……

I then moved to 80m and this is where I remained for the majority of the evening, except for one other quick look on 40m.  The 80m band was in quite good condition, except for the Over the Horizon Radar which took up a good portion of the band and was strength 8.

I was running just 30 watts from my Yaesu FT-857d, with my antenna being a 20/40/80m linked dipole which is inverted vee, just 7 metres at the apex.  I have absolutely no man-made noise at my new QTH at Ashbourne, but my signal was not making it through the noise at the homes of some amateurs.  They were very clear to me, but I just wasn’t making it.

The map below shows my contacts during the contest.  I was very pleased to make a number of contacts into New Zealand on 80m (also 40m). 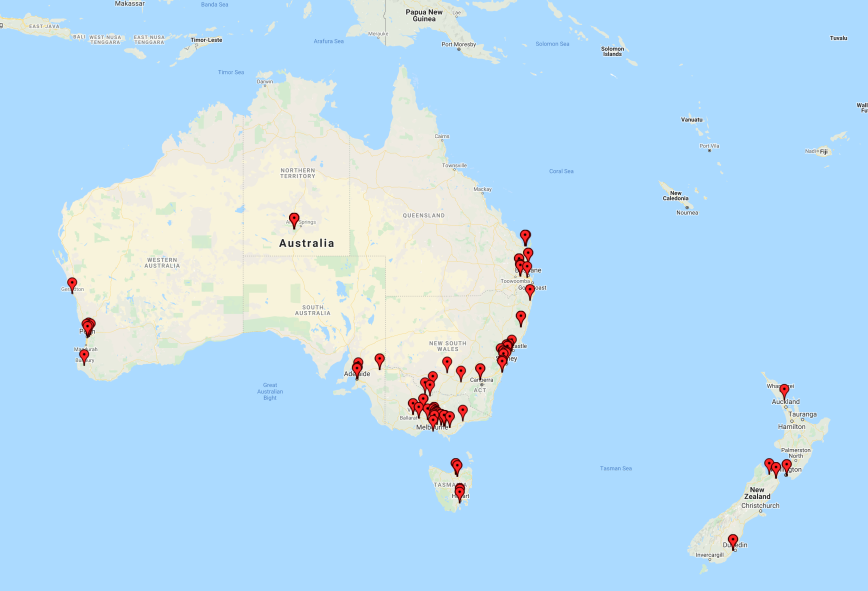 All up I was quite happy with the 166 contacts.  I cannot wait for my shack to be completed, and some substantial antennas to go up into the air.

The graph below shows my contacts on the 40m & 80m bands.

THANKS to everyone who called and GOOD LUCK to all those who took part.

As I have just moved to a new QTH, I don’t have a permanent shack or permanent antennas up in the air at the moment.  I have set up a temporary station on my back verandah which comprises the Yaesu FT-857d, 30 watts output, and my 20/40/80m linked dipole.  The dipole is inverted vee configuration, supported by a 7-metre telescopic squid pole. Conditions on the net were average.  But I did manage one DX contact to Chuck K9RM in Indiana, USA and a number of Australian stations.  Below is a short video of some of those contacts.

My noise floor was a little high, and I have since worked out where the noise originated, and that was the downlights on the back verandah.

The OZ DX Net is held every Monday, Wednesday and Friday at 1000 UTC, usually on 7.175 or thereabouts.

About 2 weeks ago I was surfing the web and became aware that the Wireless Institute of Australia (WIA) had a special event callsign for the current COVID-19 restrictions.  Over the past few months, I have worked many of the European COVID-19 special event calls, but I had not heard the VK special callsign on air, so I decided to apply for its use and give it a workout.

I headed to the WIA website and to the callsign roster and booked the use of the callsign of VK20HOME for a three day period – Saturday 4th July 2020 – Monday 6th July 2020. 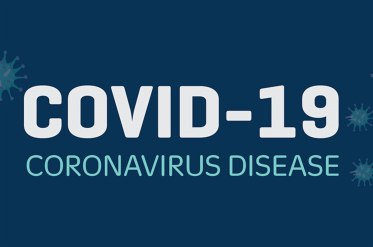 More than 30 countries have activated HOME or STAYHOME suffixes this year.  The WIA applied for the VK20HOME callsign after an official request from Martti Lane OH2BH who asked if the WIA would like to participate in the global stay home event endorsed by the IARU.

I had the weekend of the 4th & 5th July off work, but I had to work on Monday.  This left me with 2 and a bit days to have some fun on-air and hopefully remind a few people of the dangers of this disease which in recent days has really flared up in Victoria in Australia.

I have just moved QTH to Ashbourne, about 63 km SSE of Adelaide and have been here just 5 weeks.  As a result, I have no dedicated shack and no substantial antennas up at this stage.  My station for this event was my normal portable set up, consisting of the Yaesu FT-857d, 30 watts output, and my 20/40/80m linked dipole, which was in an inverted vee configuration, just 7 metres at the apex (supported on a 7-metre heavy duty squid pole).  My gear was set up underneath my back verandah overlooking the paddocks.  So I was a definite STAY AT HOME station. I started off on Saturday morning by booking into the BRL Net, the Riverland Radio Club’s Net on 7.115 on the 40m band.  First in the log was Dennis VK2HHA in Albury.

After logging a number of stations on the Net I moved up the band and found Gerald VK2HBG calling CQ using the special event call of VI110WIA in commemoration and celebration of the WIA’s 110 years of operation. 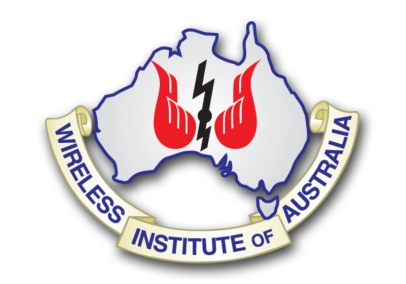 The best contact of the day was on 40m with Noel ZL3AHW who was mobile in New Zealand.  I often work Noel on the 10m band.  Noel was a good 5/4 signal and he gave me a 5/6.  I was able to copy Noel perfectly as my new QTH at Ashbourne has absolutely no man-made noise.  It is an absolute pleasure to operate on air from this new location.

I also worked a handful of New Zealand stations on 80m during the evening who were taking part in their Memorial Day Contest.

I had a bit of a sleep in on Sunday, but after breakfast, I headed outside for some more action as VK20HOME.  First up, I checked in to the Australian Ham Radio Net on 7.097 and logged Ron VK3AHR from Wodonga with a big signal, along with a number of other stations on the Net.

I then moved up the band and called CQ logging a steady flow of callers.  I then took a break for lunch and also about 2 & 1/2 hours of cleaning up my shed.  I then headed back to the radio and logged a number of stations on 40m before heading to the 20m band where I booked into the ANZA DX Net.

I then moved back to 40m and after dinner headed to the 80m bad.  All up on Sunday I logged a total of 108 stations from VK1, VK2, VK3, VK4, VK5, VK6, VK7, New Zealand, and the USA.  This included speaking with Gerard again, VI110WIA, Greg NR6Q in California USA, Glenn VK3YY/p on the top of a SOTA peak, Tony VK3TNL/2 in the Kinchega National Park VKFF-0263, Woody WW1WW in New Hampshire USA, and a number of New Zealand stations.

I was also very pleased to work a number of QRP stations: Trevor VK3DCQ on 2 watts; Peter VK3PWG/p on 2.5 watts, Steven VK2ZVG/p on 5 watts; and Steve VK1FSWB on 5 watts.

I had to work on Monday, but on arriving home from work I headed straight outside and started calling CQ on 40m.  I logged 14 stations before heading over to 80m where I worked 9 stations, and it was then back to 40m for the OZ DX Net.  I logged 8 stations on the Net from VK1, VK2, VK4, VK5, New Zealand, and the USA.

To conclude my time with VK20HOME I moved back to 80m where I logged just 4 more stations.  Conditions were quite difficult due to very loud static crashes.

I logged a total of 35 stations on Monday evening.

Most of my contacts were around VK and into New Zealand as can be seen from the map below.  My current set up is less than ideal for DX contacts. 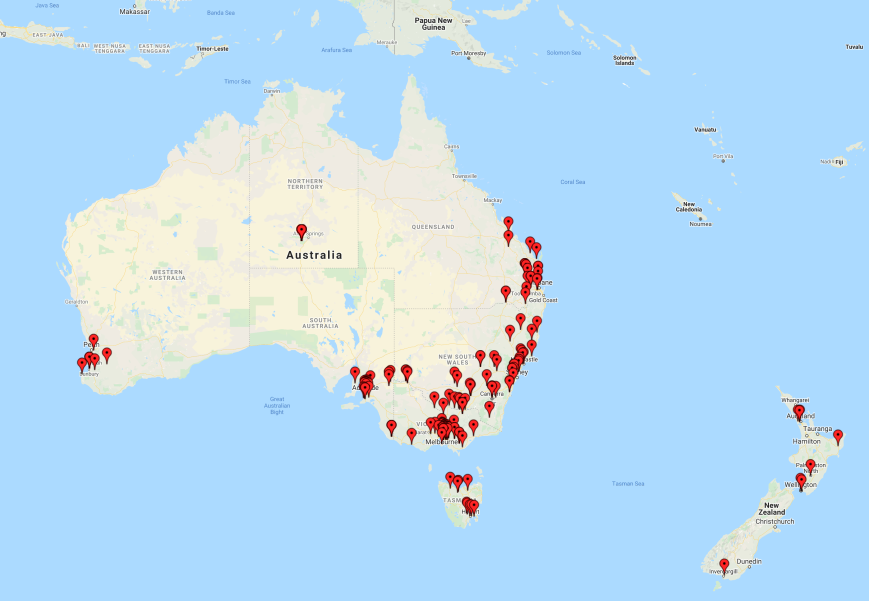 But I did manage a few contacts into the USA, which considering my station, I was very happy about. 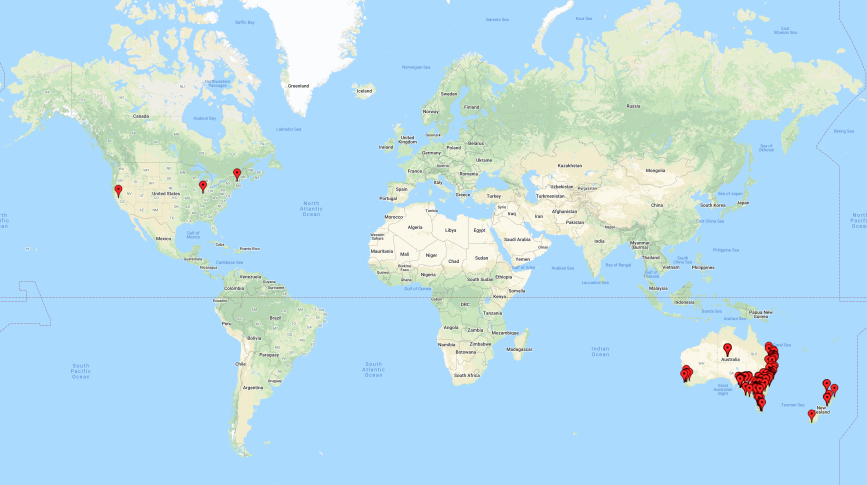 The majority of my contacts were on the 40m band with 171 contacts, followed by 80m with 60 contacts.  I found the 20m band to be very poor with just 13 contacts logged on that band to VK2, VK3, VK4, VK6, VK7, New Zealand, and the USA.  There was no long path propagation to Europe. 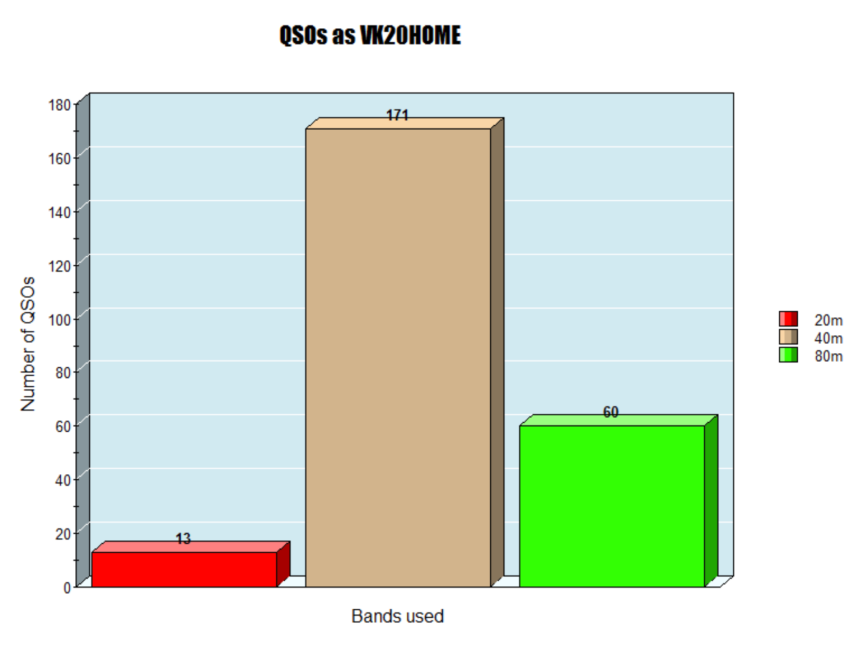 Victorian (VK3) stations featured the most in my log, with a total of 90 QSOs, followed by VK2 with 59 QSOs.  I worked 10 stations in New Zealand and just 3 stations in the USA.

THANK YOU to everyone who called.  I had a lot of fun.