My second activation for Tuesday 3rd February, 2015, was Bumbunga Hill, VK5/ SE-015, which is located about 8 km by road from the little town of Lochiel, and about 141 km north of Adelaide. 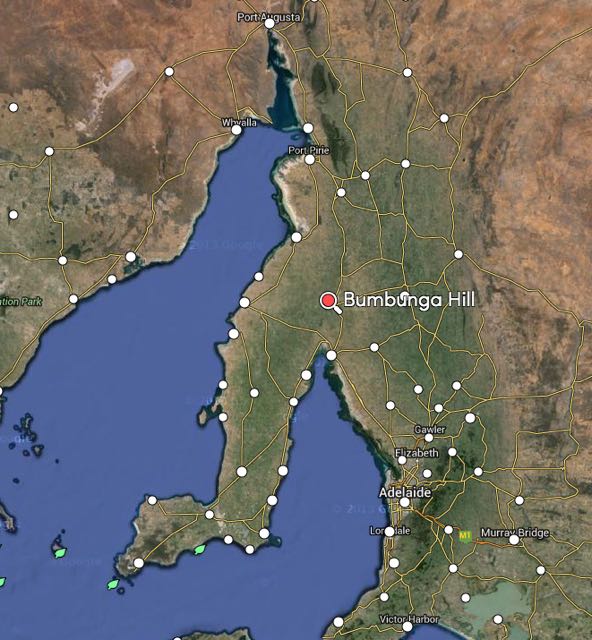 Bumbunga Hill is 413 metres ASL and is worth just 1 SOTA point.  The summit is located on private property.  I had sought permission from the land owner a few days before (contact details can be found on the SOTA database).  Access to the summit is via Landslide Road.

If you are on the A1, take Robert Street at the northern end of the town of Lochiel and travel west.  You will then reach Landslide Road.  Turn right here and travel a few km up Landslide Road.   On your right, you will see some double gates which have numerous locks on them.  Alongside, on both the left and right of these gates, are some ‘cocky’s gates’.  This is where you enter the private property.  PLEASE ensure you have permission prior to entry.  And please close the gates behind you.  You will know that you are in the right spot, because there is a large shed on the right of the main dirt track behind the gates, and a house ruin on the left of the track.

But for me, after leaving South Hummocks, I continued north along Pump Station Road, V. Taylors Road, and then Lochiel Road, until I reached Landslide Road.  It saved me having to travel back to the bitumen.

The main double gates were locked.  There is a plethora of padlocks on the gates.  Each stakeholder of the communications tower at the top has a padlock on the gates.  I entered via the ‘cocky’s gate’ on the left, which consisted of a rusty star dropper and some mesh.  The links were quite rusty, and in the end one of them snapped on me.

I followed the fenceline up passed the dam and stopped for a short time to have a chat to one of the farmhands.  He then pointed out a gate on the other side of the dam, which in turn leads to the track which takes you up to the summit.  Don’t attempt this track in a conventional vehicle.  You will make it to the ridgeline above the shed and ruin, but from there the track is definitely 4WD territory.  It is very rough with lots of washaways and large rocks.

Once you have negotiated the rockiest part of the track, you will reach another gate.  Today, it was closed.  Please leave all of the gates as you find them.  Even before you reach the very top of Bumbunga Hill, you will be rewarded with some excellent views of the surrounding countryside, the little town of Lochiel, and Bumbunga Lake.

The dirt track from the top gate to the summit is good from here.  Follow the fenceline until you reach another gate.  On the other side of this gate you will find the telecommunications tower, the Lochiel repeater, and what is left of the trig point.  When I first activated this summit back in April, 2013, the trig point was lying on its side on the ground.  Nowadays it has gone, and the trig is marked with three upright poles, which are painted blue.  They make an excellent anchor point for a squid pole. 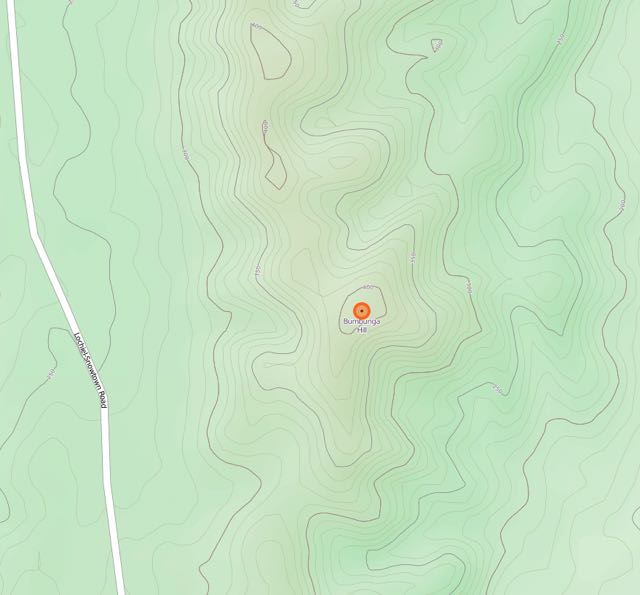 The town of Lochiel lies below the summit, just to the south east.  Governor Fergusson named it Lochiel after Lochiel Forest, near Inverness in Scotland.  Lochiel is also the name of one of the titles of the chief of the Cameron Clan, while the Scottish ‘Lochiel’ comes from the Gaelic ial – ‘gleam of sunshine’.  Salt has been mined at nearby Bumbunga Lake since 1912.  A coal mine was also in operation, a few km east of the lake, between the 1980s and 1990s.

The earliest reference to Lake Bumbunga is to be found in a little book entitled ‘Reminicences of a Sojourn in South Australia’ by ‘A Squatter’, published in 1849.  The author talks about a chance meeting with two tired travellers at a camp fire, at the head of St Vincents Gulf, not far from the Lake.  One of the travellers told the squatter that he had come from Lake ‘Bambunga’, which he claimed to have discovered.  The traveller went on to say, ‘The name is one that the natives formerly gave it and, as being the discoverer and licenced occupier, I conceived I had a right to apply what name I pleased to it’.   It appears that name has since elapsed over time into Bumbunga.

According to anthropologist Norman Tindale, the name was derived from the local Parnpangka aboriginal people and means ‘rain water lake’.  However, in 1967, H.M. Cooper of the SA Museum stated that the word Bumbunga meant ‘by, near or at the lake’.

The squatter goes on to say “the ‘Bambunga country’ was carrying 10,000 sheep and eighteen perpetural springs”.  The area was part of Hummocks Run.  Bumbunga was one of two substations for this very large sheep and cattle station, which by 1864 had 70,000 sheep, 200 bullocks and horses.  The Bumbunga station consisted of a pine house, store, men’s kitchen, sleeping rooms, woolshed, yards, sweating shed, fenced paddocks, three wells troughs, and one pump.

I found the following from the Adelaide Observer, dated Saturday 1st October 1864.

And also the following from the Northern Argus, Clare, dated Friday the 13th October, 1871.

I set up at the trig point, and secured the 7 metre squid pole to one of the trig point poles, with two octopus straps.  It was a warm day, but it was also incredibly windy.  And the flies were out in force.  The Aerogard did not seem to be having any affect.  For this activation I ran the Yaesu FT-817 and 5 watts output.

Before calling CQ, I tuned across the 40m band and found  Ian VK3TCX on 7.095 calling CQ from SOTA summit, Mount Cann, VK3/ VG-133, which is located in the East Gippsland area of Victoria.  Ian’s signal was pretty weak, but very readable (5/2).  So I waited a little while for the multitude of callers to slow down, and then gave Ian a call.  We exchanged 5/2 signal reports with each other.  A good start to the activation at Bumbunga Hill….a Summit to Summit contact.

I then went down to 7.090 and put out a CQ call and this was answered by Larry VK5LY in The Riverland, followed by John VK2YW in Wagga Wagga, and Rob VK3EK.  As it was a weekday, I had a steady flow of callers, but certainly not the ‘pile ups’ that can be expected on weekends.

And I also worked a few mobile stations.  The first being Tom VK5EE who was mobile in Mount Gambier, followed by Brian VK3YFL mobile near Kaniva in Western Victoria.

After working a total of 16 stations on 40m I lowered the squid pole and removed the links and headed up to 14.310 where I put out a CQ call.  This was immediately answered by Greg VK5LG in the Adelaide Hills, who had been my last contact on 40m and had followed me up here to 20m.  I worked a total of 6 stations on 20m SSB, including another Summit to Summit.  This time with Peter VK3PF/7 who was on Macgregor Peak, VK7/ SC-018, which is also located within the Tasman National Park (5/4 sent and 5/7 received).

I then returned to 40m for a short time where I worked another 5 stations in VK3 & VK5.

Once I got down off the summit, I drove down to Lochiel and found a shady spot under a tree alongside of Bumbunga Lake and had some morning tea.  I then jumped back into the 4WD, and headed north to Crystal Brook.