Our final day of our two week trip down the Great Ocean Road had arrived.  It was Friday 20th November 2015.  We had just one planned activation for the day.  That was to be the Little Desert National Park VKFF-0291.  I need just a handful of contacts to qualify the park for the World Wide Flora Fauna (WWFF) program, as I had activating the park previously, and fallen a bit short of the 44 QSO threshold. 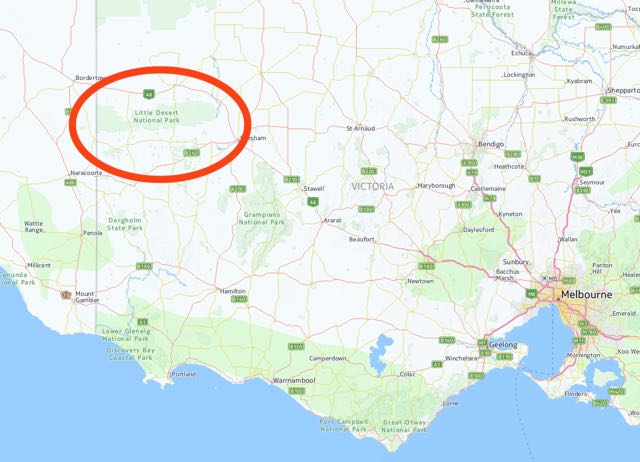 Above:- Map showing the location of the Little Desert National Park in western Victoria.  Map courtesy of http://www.here.com

After leaving Ararat we travelled west on the Western Highway towards Stawell.  Along the way Marija tried to locate a phone number for Mick VK3PMG who lives in Stawell.  We had hoped to pop in to say a quick hello.  Unfortunately we could not find a contact number for Mick.  But we did divert into Stawell and tried at the local bakery to see if they knew Mick.  Sadly the answer was no.

So we continued on to Horsham, where we stopped for a few hours to say hi to my Uncle Jack and Aunty Dawn, and cousin Debbie.

After leaving Horsham, we continued our journey west along the Western Highway and then turned off to Dimboola.  It was from here that we would access the Little Desert National Park.  Dimboola is a little town located in the Wimmera region of Victoria.  It was originally known as ‘Nine Creeks’ and later become Dimboola in the 1860’s.  It is generally accepted that the name ‘Dimboola’ comes from the Sinhalese word ‘dimbula’ meaning Land of Figs.

The main street of Dimboola

‘The gateway’ to the park 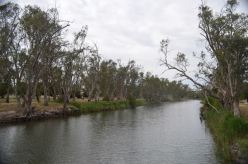 The Wimmera River at Dimboola

We travelled south out of Dimboola, along the Horeshoe Bend Road, which follows the Wimmera River.

Little Desert National Park is situated about 375 kms from Melbourne, between the Wimmera River and the South Australian border.  The park was originally known as the Kiata Lowan Sanctuary and was created in 1955.  A total of 217 hectares was set aside for the preservation of the Malleefowl (also known as Lowan).  In 1968 the Sanctuary was increased to 945 hectares and was declared as the Little Desert National Park.  It was at this time that the Government announced that around 80,000 hectares of nearby land would be sub-divided and cleared for agriculture.  Fortunately this plan was abandoned after it was argued that in the long term, the land would be more valuable in its natural form.  And even better, an additional portion of land was added to the park, which was increased to 35,300 hectares.  The park was again increased in size in 1986 to its present, 132.000 hectares.

We had soon reached Horseshoe Bend itself, in the Wimmera River.  There is no doubt as to how it came by its name, as the Wimmera bends here dramatically. 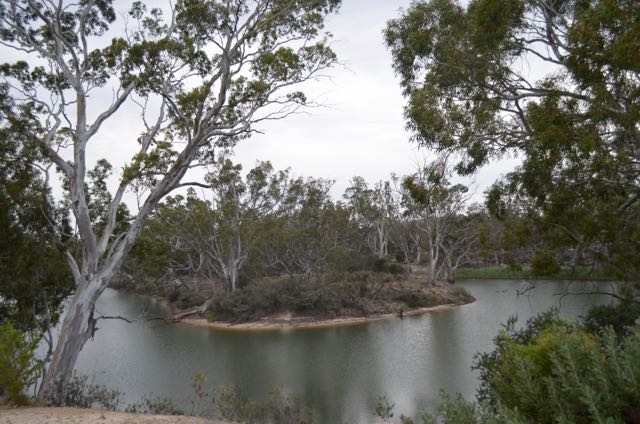 Just a little further on is a turn off to the Horseshoe Bend campground area.  There are campsites here, along with flush toilets, fireplaces and picnic tables.  I have operated from here before and it’s an ideal placed to set up a portable ‘shack’. 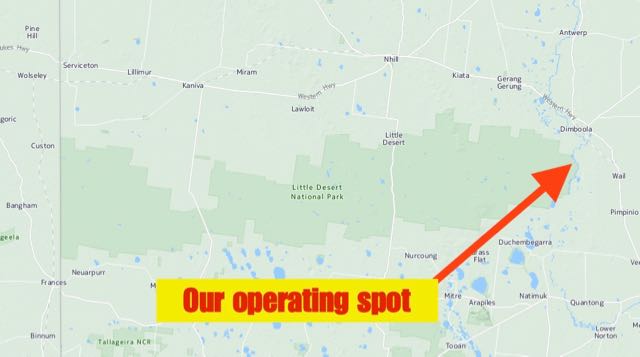 Above:- Map showing our operating spot at the eastern end of the park.  Map courtesy of www.here.com

Although there are tables and benches here, we decided to set up right alongside of the Wimmera River and under the shade of some of the mighty gum trees on the banks of the river.  It was quite a warm morning, and it was idealic sitting alongside the river.

There were a few campers and picnickers in the campground, so we chose a nice quiet spot away from the crowds. 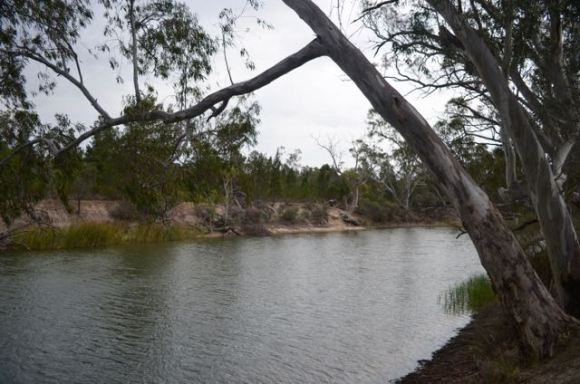 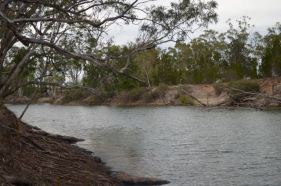 I found that 7.144 was free and I started calling CQ.  My first taker was Ron VK3MRH, who has recently taken up hunting parks.  Ron had a beautiful 5/9 signal into Little Desert.  This was followed by Rob VK4AAC/5 who was equally as strong, and then Mick VK3PMG.  I had a chat to Mick about trying to chase him down earlier and we subsequently exchanged phone numbers.  Will definitely catch up next time Mick.

It was pleasing to hear the band in great shape and there was certainly no shortage of callers, despite the fact that this was a weekday.  I had a good steady flow of callers on 40m from VK1, VK2, VK3, VK5, and VK7.  There were a few good QRP contacts thrown in there as well.  They included Adrian VK5FANA running 5 watts from the Yorke Peninsula (5/8 sent and 5/9 received), and Amanda VK3FQSO running just 1 watt (5/6 sent and 5/8 received).  I also worked Gary VK5FGRY who was operating from home in the Adelaide CBD with a small antenna mounted on the railing of his apartment balcony (5/3 sent and 5/5 received). 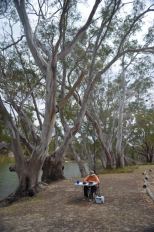 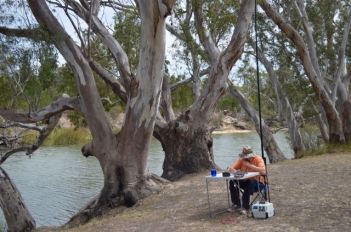 I soon had 41 contacts in the log, and traffic had slowed down a bit on air, so I took the opportunity of heading off to 20m to see if I could pick up some more callers there.  I called CQ on 14.310 and this was answered by Cliff VK2NP with a weak but very readable signal (5/3 both ways), followed by Brett VK2CW (5/7 both ways).  Next up was Rick VK4RF/VK4HA who was a solid 5/9 from Queensland.  My last contact in Little Desert was with Lee who was a good 5/7, but was struggling with me (4/1 received).

Whilst operating I had a visitor just above me.  It was a kookaburra who I am sure had come in expecting a feed.  I suspect they get fed quite a bit by the campers here at Horeshore Bend.

After an hour in the park I had a total of 46 contacts in the park.  I had qualified the park in its on right, just in this activation.  It was time to pack up the gear for a final time and head for home.  It had been a fantastic trip and I thank everyone that called in whilst I was away for the 2 weeks.

After leaving Dimboola, we continued west on the Western Highway, stopping briefly at the South Australian/Victorian border, for a photo opportunity.  And also a visit to the little shop situated here, to buy some local produce.