Access to the park is via a wooden gate on the southern side of the Mt Magnificent Road.  There is a Heysen trail sign on the fence, which is alongside an old stone homestead.  I parked the car at the gate, and walked through the paddocks, where there were cattle grazing.  It was about a 3 km walk from there to get to the park.  Under foot it was very wet, particularly in the paddocks, but a trail starts at the 2nd gate, which is a bit more pleasing to walk on. 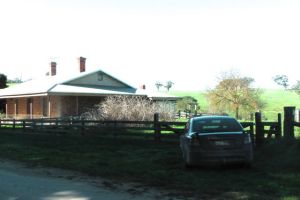 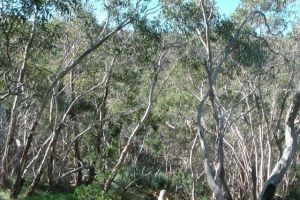 The Finniss River, which is about 50 kms in length, flows through the park.  The Finniss commences nearby at Yundi and flows into the Lower Lakes at Goolwa.

There are very panoramic views of the Fleurieu Peninsula, down to Victor Harbor, Goolwa, and Hindmarsh Island.

I set up my 7 m squid pole and the 40m dipole.  I used some large moss rocks to hold the squid pole up, and there was no shortage of options of trees to secure the ends of the dipole. 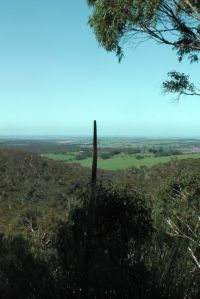 I used a tree stump as a back rest and tuned the radio to 40m.  My first contact was with John VK5BJE who was portable in the Pikes River CP.  I was also lucky enough to speak with Hans VK5YX who was portable in Queensland with his wife Lesley VK5LOL, at Coopers Creek Crossing.  Hans was using the mobile whip on his car and had a great 5/5 signal.  And to my surprise with my 5 watts and little dipole I received 5/5 back from Hans.

I also spoke with Larry VK5LY who was operating portable in the Morgan Conservation Park (5/9 both ways). 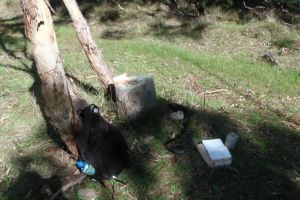 Within 45 minutes I had accrued 14 QSO’s and I was ready to pack up and head home.  I needed to go and have some lunch and then head up to Clare to stay with Ian VK5CZ, and activate 4 SOTA peaks over the weekend.

Finniss Conservation Park is a beautiful park and is well worth a visit.  Unless you did some homework on the internet, most people wouldn’t even know the park was there.

One thought on “Finniss Conservation Park”