Last night I had a case of insomnia, so I headed to the ‘shack’ to hopefully work some DX.  What happened was beyond my expectations and sent me off to bed some 4 hours later !  I managed to work a handful of new countries for particular bands, and a few new USA States for particular bands.  I also managed to work a couple of European WorldWide Flora Fauna (WWFF) activators in Poland.  This is never easy because of the European pile up, so I was really happy to get the contacts in my log.  But the cream on top of the cake for me, was bagging 5 European SOTA activators.  And it could have been a few more.

My first SOTA contact was with Zoltan, OM/HA5CQZ/p on top of Velky Inovec, OM/ NR-001.  This peak which is located in the Nitriansky region of the Slovak Republic, is 901 metres and is worth 4 SOTA points.  Translated to English, Velky Inovec means Big Inovec.  The summit is located in the central part of the Pohronsky Inovec mountains and is the highest peak of the entire mountain range.  Pohronsky Inovec is volcanic in origin and is composed of the volcanic rocks andesite and rhyolites.  The southern portion of the mountain range is covered in deciduous forest, predominantly oak.  There are very good views of southern Slovakia from the summit, including the Danube River and the mountains beyond.  Below the summit is the Grand Inovec tourist lodge.

I saw Zoltan spotted on SOTAWatch, so I tuned to his operating frequency on 20m, and there he was.  Zoltan had quite a good signal coming in on the short path.  Because it was early in the morning here, the noise floor on 20m was very low.  No plasma TV noise or solar inverter interference.  Heaven !  Zoltan  had quite a few European chasers calling him, but I perservered and got through (5/3 sent and 5/7 received).  Zoltan was QRP and he was using just 5 watts and a simple dipole antenna. 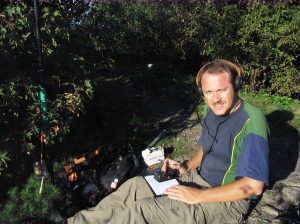 My contact with Zoltan spurred on my enthusiasm and I kept a close eye on SOTAWatch, whilst I kept tuning across the 20m band working a few DX stations.

Hohenstein is 526 metres ASL, and is located in the Oberosterreich region of southern Austria, and is worth 1 SOTA point.  It is located neat Wilhelmsburg.  According to Peakery.com, Hohenstein is the 454th highest mountain in Austria.

Again, Franz had quite a few European chasers, so I was patient, and waited for an appropriate spacing between all the callers, to slip in the VK, in the hope that Franz would hear me.  It took quite a few attempts, but finally I made it (5/2 both ways).  I was Franz first ever VK contact during an activation.

I then saw a spot for Eloy, EA1IEH who was portable on a summit in Spain.  Eloy was actually stronger than Zoltan and Franz.  He was about 5/4 and perfectly readable.  But he had a really big pile up from Europe and it was impossible to break through.  Sadly, Eloy QSY’d to 40m before I was able to work him.

However I was called by Manuel EA2DT, who had heard me trying to get through to Eloy.  Manuel tried calling Eloy, but he had already gone.  Thanks for trying Manuel.

My third SOTA contact came as a bit of a surprise.  It was following my chat with Manuel, that I received a call from Vlado, OM1AX/p, who was operating from Devinska Kobyla,  OM/BA-004.  Initially I didn’t realise that Vlado was on a SOTA peak, because he had such a strong signal.  Vlado was running 50 watts and a dipole, and was a solid 5/5 signal.

Devinska Kobyla is the highest peak in the Devin Carpathians, which are part of the Little Carpathians mountain range.  It is located in the Bratislavský region of Slovakia.  The summit is 514 metres above sea level and is worth 1 SOTA point.  It is a treeless summit and contains an abandoned military rocket base.

From the top of the summit there are open views of Bratislava, Austria, Hungary, the Danube River and Morava River.  There is a 4 km instructive path that leads through Devínska Kobyla, with one significant area called Sandberg.   This is one of the most important palaeontological localities in Slovakia.   The yellow faces of the old sandpit has remnants of rocks of the tertiary sea with horizontally deposited layers, and there are still fossils of sea fauna to be found there.  The age of these rocks is estimated to be between 14 to 16 million years old.

My fourth SOTA QSO was with Miro, S52ON/p on Gora Oljka, S5/KS-051.  Again I had seen Miro spotted on SOTAWatch at about 1530 UTC (2.00 a.m. South Australian local time).  I had just finished working a European pile up on 20m, when I saw Miro spotted.  Fortunately for me, the callers had ceased, so it was a good opportunity to slide up to 14.290 and have a listen for Miro.  And to my surprise again, I was able to clearly hear Miro’s signal coming into South Australia all the way from the top of a mountain in Slovenia.

Gora Oljka is 733 metres above sea level and is worth 2 SOTA points.  It is situated in the KamniÅ¡ko – Savinjske Alpe region of Slovenia.  Gora Oljka translated to English means Olive Hill.  Standing at the top of the summit is the Church of the Holy Cross, which was constructed in the middle of the 18th century. 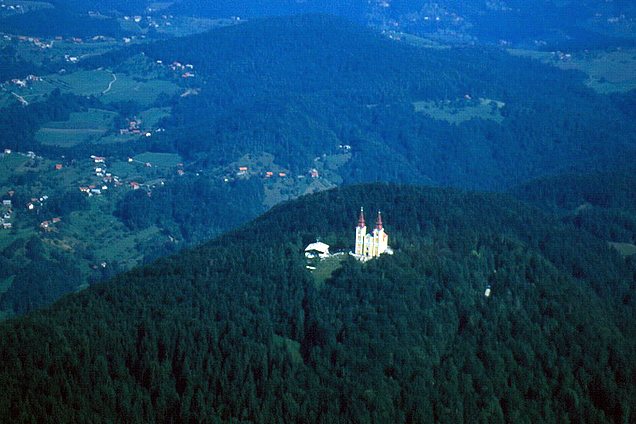 Miro’s signal was not strong on the S meter on the FT-2000 but he was perfectly readable.  I called him and got through almost straight away (5/3 sent and 5/9 received).

And last but not least, I had a QSO with Roberto, EA2DXY/p on Murugain EA2/ SS-030.  I had just finished a QSO with Norman ZS5JY in South Africa, when I saw a spot come up on SOTAWatch for Roberto.  This was about 1550 UTC (2.20 a.m. South Australian local time).

I tuned to 14.288 and heard Roberto coming in with a 5/3 signal with his QRP operation.  Although not strong, he was perfectly readable.  Again, I waited for an opportune time and gave Roberto a call and got through (5/3 sent and 5/5 received).  Unfortunately, IZ0UYB came up in the middle of our QSO, just 2 kc away, calling CQ DX with a very strong signal.  This made things really difficult.  Fortunately Roberto was in the log.  I was ‘unlucky’ 13th Chaser for Roberto on this peak.  Not so unlucky for me !

Mururgain is 778 metres ASL and is worth 1 SOTA point.  It is situated in the Gipuzcoa region of Spain.  Gipuzcoa is a province in northern Spain and a historical territory of the autonomous community of the Basque Country.

Prior to heading off to bed I saw a spot come up for Jon, N7AZ on W7A/ MN125, so I headed up to  the top part of 20m to have a listen.  Although not at all strong, I could hear Jon coming in to VK5 land on the short path across the Pacific.  It was not easy…it was a struggle.  Jon’s signal report was 3/3.  I heard him working USA Chasers and tried getting through, but couldn’t make the journey before Jon went QRT, on his way to his next summit.  I thought about hanging around for another 90 minutes, waiting for Jon, but tiredness got the better of me.  And after all, I do need my beauty sleep !

Although I have worked European SOTA activators before, this was the first time that I had worked so many in the one day / night, and especially on the short path.  I thank all the SOTA activators who took the time out of the pile up to listen for my signal from down here in Australia.  This was a really good fun night and well worth staying up into the wee hours of the morning.