On Saturday morning, I eagerly awaited the first of a number of SOTA activations.  I was sitting on 2,976 Chaser points, and was hoping to get across the 3,000 point line.

My first contact of the day was with Nick VK3ANL who was on an un-named summit, VK3/ VC-032, which is situated north of Ballan.  Another 4 points to the tally.

I then worked Nick another two times during the day, whilst he was on Mount Warrenheip VK3/ VC-019 and then Mount Buninyong VK3/ VC-018.  Nick activated 4 summits that day.  Great effort Nick.

What was really enjoyable this day, was to get VK2 SOTA activators in the log.  It has been a real slog the past 6 months with the VK1 & VK2 Activators on 40m.

I have printed out & mailed off a certificate for Rod VK2TWR, just to say thanks.

Marija and I headed off the LeFevre Peninsula and along the Port River Expressway, and then north on Port Wakefield Road.  We then turned left onto Port Gawler Road, and headed west towards the coast of Spencer Gulf.  As we were travelling towards the park, it brought back a lot of fond memories.  When I was a child, I often went to Port Gawler with my grandfather and went ‘raking’ for Blue Swimmer crabs.  Grandpa came to live with us when I was just a young boy, following the death of my Grandma.  And Grandpa was a keen crabber and he & I would often drive to Port Gawler beach in his old Hillman Hunter to go crabbing.

Port Gawler Conservation Park consists of vast tidal flats and fringing mangrove forests that are crossed by a multitude of tidal channels.  Shell-grit ridges occur along a well-defined belt within the mangrove forest.  I remember well, that each time we visited the park all those years ago, we would always bring back a bucket of shell grit and cuttlefish.  A that time my Dad was a breeder of finches and parrots.  The birds loved the shell grit and cuttlefish, which were also a source of calcium.

The Gawler River, which has its source over 40 km to the east, flows through the park and forms a long, narrow estuary at Port Gawler.  Fish can be caught in the River, including Bream & Mullett.

As we drove along Port Gawler Road, the sounds of off road vehicles and motorcycles became louder and louder.  There are a few Off Road Parks in the area, and sadly the area is also used as a bit of a dumping ground for rubbish.  I found the following article in the local newspaper which shows that this is an ongoing problem…..

Plans to build a settlement at Port Gawler at the mouth of the Gawler River estuary, commenced in 1869.  Below is a map dated 23rd March, 1869 from the South Australian Lands Department.  It is signed on behalf of the surveyor-general, Mr George W. Goyder  and his Excellency Sir James Fergusson, Governor of South Australia.  It shows that Port Gawler was subdivided into various allotments with the street names, named after the Spanish campaign of General Wellington (of Waterloo fame).

In 1869, the ‘Lisbon’ wharf and Waterloo Road were constructed with a grant of £6,000 made to the District Council of Port Gawler.  In its heyday, Port Gawler was an extremely busy place.  Cargoes of grain and various other produce were loaded onto ketches that were able to sail into the wharf across the sand bar at the mouth of the creek at high tide.  It is reported that between December 1874 to November 1875, about 295 boats were loaded at Port Gawler.

The final cargo to leave the port was a shipment of strainer posts to the Peninsula in 1920.  However the arrival of the railway made the use of the port obsolete.  Following this, the blocks within the township were sold to prospective speculators, and the majority of those were reverted to the Crown due to unpaid taxes.  The final ‘freehold’ blocks were held until 1960.  Very little now remains of what was once a very important port.

Marija and I drove to the very bottom of Port Gawler Road, where there is a parking area and a small shelter.  The shelter was a welcome sight, as the weather had really warmed up.  At least there was a spot that we could park the car, and Marija could remain in some shade while I activated the park.

The carpark was really busy, so this was out of the question to erect the antenna.  We set up the gear just to the south of the carpark, where I found some shade under some mangrove vegetation on the shore of the Gawler River.  I was only about 10 feet from the water.  I brought along the Yaesu FT-450 for this action, and ran about 30 watts, into the 40m/20m linked dipole.  The squid pole holder for the 7m squid pole, was easy to push into the tidal sand. 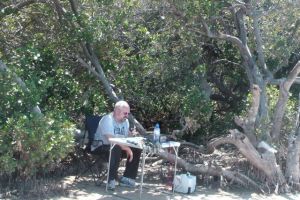 My first contact in the park was with Ian VK1DI who was portable on SOTA peak, Pheasant Hill, VK1/ AC-021.  Ian’s signal was quite low down, only 5/2.  However, because the noise floor at Port Gawler was so low, I was able to hear Ian perfectly.  Not a bad start…a SOTA contact.

Following my QSO with Ian I went up to 7.100 and put out a CQ call.  First taker was the ever reliable John VK5BJE from the Adelaide Hills.  John’s signal was not as loud as I expected.  A good 5/8, but I expected louder.  I received a 5/4 from John.  My VSWR was up a little high for this activation, for whatever reason.  But it wasn’t that high that it should affect my signal that much.

Col VK5HCF then called in from Mount Gambier and gave me a 4/3 signal report.  And this was followed by Brian VK5FMID, also from Mount Gambier, who also gave me a rather poor report of 4/4.  This prompted me to look at the antenna quickly before the next QSO.  The alligator clip links appears okay.  Marija had accidentally stepped on the coax at Mutton Cove, and I started to wonder whether some damage had been done, and that was the reason why the VSWR was up a bit, and why signals were down a bit ?

But then Larry VK5LY from Renmark in the Riverland gave me a call, with a beautiful 5/9 signal.  And I received 5/8 back from Larry.  Larry advised that he couldn’t even hear me when I was in Mutton Cove.  Now I started to think that it was just propagation conditions.  They had been so good 90 minutes earlier at Mutton Cove, and had obviously taken a real step backwards.

John VK2AWJ from Gol Gol in New South Wales, came up to say hello.  John’s signal was a solid 5/8 with no QSB.  Obviously the propagation gods on 40m were playing with the band.

I also spoke with Bill VK5MBD from Red Hill in the mid north of South Australia, with his normal beautiful 5/9 plus signal.  I don’t think I have ever spoken with Bill when his signal has been below 5/9 +.

John VK5DJ from Millicent in the south east also called.  John’s signal was an excellent 5/9 plus and I received a 5/9 from John.  And yet 30 minutes earlier I was receiving 4/3 and 4/4 signal reports from the same geographical area.

Another good contact was with Frank VK5KV who was mobile between Port Augusta and Port Pirie, on his way to a trap shooting meeting.

My final QSO from Port Gawler was with Ian VK5CZ from Clare who had an excellent constant 5/9 signal.  I received a 5/9 signal report from Ian.

Whilst I was sitting back enjoying the day, quite a few kayakers paddled passed me.  One of those was a young lad who had his fishing gear on board.  He paddled up to me and asked if I was an amateur.  Apparently one of his mates has a licence, so he recognised that my squid pole wasn’t for fishing.  Backing up my earlier comments about the state of the area, he advised that there was now very little fish in the area due to pollution.  He stated that car bodies and general dumping of rubbish in the area, had significantly degraded the area.

I found a post on the internet that probably sums up the park and the area…..

“Today, the main activities seen in the area are fishing, vandalism and burning of stolen cars……..there is a boat ramp and access for kayaking, I am not sure how much of your car would still be there upon your return. Given the funding cuts to the Department for Environment and Heritage I don’t expect this to improve.”

This was a very enjoyable activation under some unusual propagation conditions.  It wasn’t until I got home and started to read some of the posts on the SOTA Yahoo group, that I saw that the band was in rather port shape.

The day was finished off with a nice meal & a few Bundies and coke, at the Southern Hotel at Gawler. 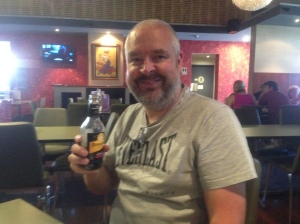