For the 2015 John Moyle Memorial Field Day Contest I headed down to Parnka Point at the Coorong National Park, about 170 km south east of Adelaide.

More information on the Coorong National Park can be found at…..

Parnka Point was a significant meeting site for the five aboriginal tribes that formed the Ngarrindjeri clan.  Parnka is a Ngarrindjeri word meaning ‘sandy beach’.  As you look out across the lagoon, you can see wooden poles in the seater.  These are the remains of a ferry built last century to access the Younghusband Peninsula.

It was a very beautiful outlook, overlooking the lagoons.  The weather was sensational…..28 degrees C. 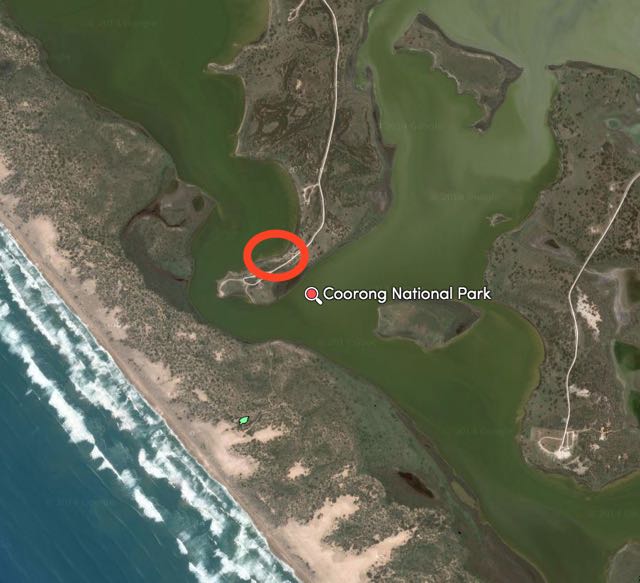 I took part in the 6 hour section and I managed a total of 238 contacts.  Most of those were on 40m SSB (222), but I did squeeze in 26 on 20m SSB.  Most of the contacts on 20m were with other VK’s, but a few Europeans and Japanese gave me a call, and exchanged numbers.  They were obviously aware of the JMMFD.

For the contest I used my Yaesu FT-857d and 40 watts on 40m and 80 watts on 20m.  The antenna was a 40m/20m linked dipole supported by a 7 metre telescopic squid pole (inverted vee).  The radio was powered by a 44 amp hour power pack(2 x 22 amp hour SLAB batteries) which I topped up with the use of some solar panels.

I used my laptop for this activation and Mike’s VK Contest Log.  But the inverter which I had purchased to connect the laptop to via the power pack, threw off S8 noise.  So I had to take some breaks from the radio, to charge the laptop.

I probably ‘gasbagged’ a bit for the first few hours, telling people a bit about my location and what equipment I was using.  This is what I like about the JMMFD.  You can take it easy or take it very seriously.

At tea time, I sat back and enjoyed the magnficent sunset and a glass or 2 of red with my evening meal.  And then back into it until about 9.00 p.m. SA local time when I packed up and headed home.