Following up on the recent Top VKFF Activator certificates that I recently released, I have now released the Top VKFF Hunter certificates.

These will be released annually for the Top VKFF Hunter.  In other words, the amateur who has worked the most number of VKFF references in that year.

I have started off in 2013, as this is the year that VKFF kicked off in Australia.

The Top VKFF Hunters in 2013 were myself and Larry VK5LY (we both worked 39 different VKFF references).

The Top VKFF Hunter in 2014 was Peter VK3PF, with 85 VKFF references worked.

In second place was Paul VK5PAS with 83 references.  In 3rd was Amanda VK3FQSO with 81 VKFF references.  Fourth spot was shared by Nev VK5WG and Matt VK1MA with 62 references.  And in 5th position was Ron VK3AFW with 59 references.

Remember, this certificate is awarded for VKFF references worked only.  It does not take into account references you worked outside of VK.  Stand by, I am working on that, with a possible annual certificate to come.

For more stats, have a look at WWFF LogSearch at…..
http://logsearch.wwff.co/index.php 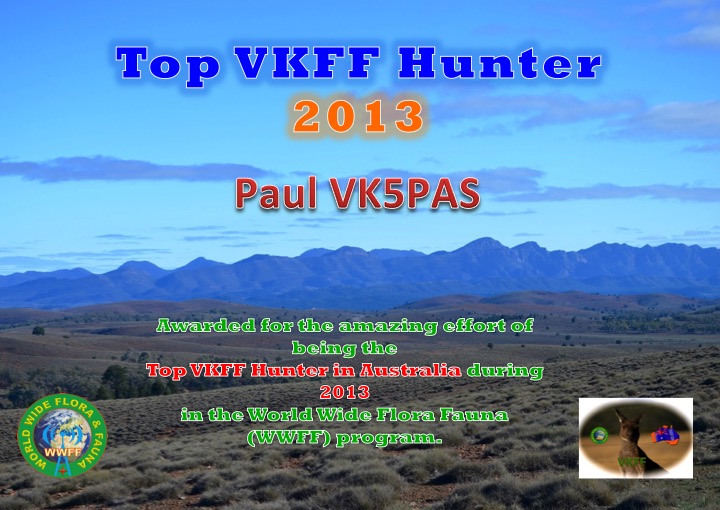