On Sunday morning (21st May 2017), myself and four other team leaders had planned to take a number of people out into the field to activate South Australian parks as part of the 2017 WIA AGM & Convention.  The team leaders and parks comprised…..

I had three people in my group…..

Our park was to be the Mark Oliphant Conservation Park 5CP-127 & VKFF-0782, which was a short 20 minute drive from Hahndorf.  The park is about 2 km south east of Adelaide.

Aerial shot of the park, with Adelaide in the background.  Image courtesy of Google maps

Messmate stringybark and brown stringybark dominate the forest canopy in the park.  There is a small stand of candlebark gums near the old oval.  This tall eucalypt with white bark is rare and only found in the higher rainfall areas of the Adelaide Hills.  Tiny patches of pink gum, manna gum and blue gum also occur in the park.

The park was first used for recreation during the 1930’s and was purchased by the Young Men’s Christian Association of Adelaide Incorporated (YMCA) in 1945.  In 1953 it was acquired by the South Australian State Government and was used as a National Pleasure Resort.  In 1972 the park was proclaimed as the Loftia Recreation Park.  In 1992 and again in 1995, the park was expanded.  In 1996 the park was renamed in honour of former State Governor Sir Mark Oliphant’s contribution to conservation.

From the Adelaide Advertiser, Tue 19 Feb 1952.  Courtesy of Trove

Sir Marcus Laurence Elwin ‘Mark’ Oliphant (1901-2000) was an Australian physicist and humanitarian who played an important role in the first experimental demonstration of nuclear fusion and also the development of nuclear weapons.

The park is home to  large amount of native wildlife including the nationally endangered Southern Brown Bandicoot and the rare Yellow Footed Antechinus.  Over 70 species of bird have been recorded in the park including the Superb Fairy Wren, Scarlet Robin, Golden Whistler, Adelaide Rosella, Crescent Honeyeater, Yellow-faced Honeyeater, and Grey Fantail.

We set up in my normal operating spot, on Honeyeater Track on the northern side of Evans Drive.  This is in a high position in the park and there is plenty of room to string out a dipole.

It was an absolutely beautiful sunny morning and was had indeed been blessed by the weather gods.  For this activation I ran the Yaesu FT-857d, 60 watts output and the 80/40/20m linked dipole, inverted vee, supported on the 7m heavy duty telescopic squid pole.

Gerard VK2JNG was up first and had soon qualified the park for VKFF, with in excess of 10 QSOs in the log.  Cliff VK2NP was number one in the log.  Gerard commented to me that he had been bitten by the portable bug, so I expect to hear Gerard on air from parks in the near future.  Gerard’s tally included 2 Park to Park contacts; Chris VK3PAT in Cape Conran Coastal Park VKFF-0744m and Ivan VK5HS in the Pike River Conservation Park 5CP-180 & VKFF-0831.

Gerard VK2JNG on the mic

Next up was Al VK2OK.  Everyone seemed to have come out of the woodwork, and it wasn’t long before Al was managing a mini pile up.  Al very very quickly qualified the park for VKFF, making a total of 20 contacts including numerous Park to Park QSOs. 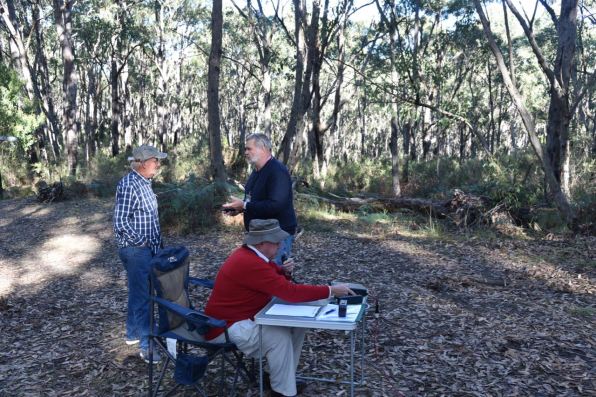 Al VK2OK on the mic

Meanwhile, Stuart VK3STU was making contact with other park activators on 20m simplex. 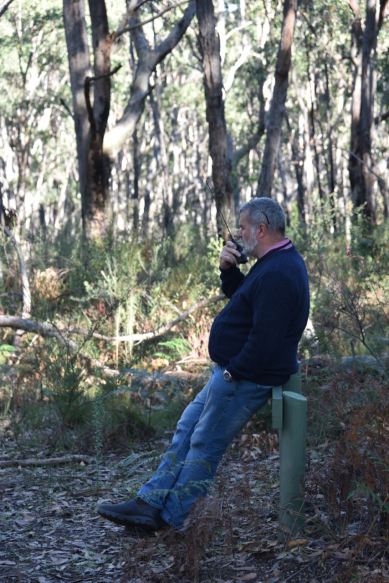 Just before midday Gerard and Al left to head back to the oval at Hahndorf.  Stuart VK3STU took the opportunity of getting onto 40m and 80m, making a number of contacts and well and truly qualifying the park.  Stuarts tally was 23 QSOs with 11 Park to Park contacts.

I also squeezed in 20 minutes from the park as VK5WOW.

It was great morning out, with many positive comments about operating portable from parks.  Hopefully we have recruited a few more park activators and hunters to the ranks.  Thanks to the team leaders and participants.  And thanks to everyone who called.

I worked the following stations as VK5WOW on 40m SSB:-