Our fourth park for Saturday 10th November 2018, was the Murray Sunset National Park VKFF-0373, which is located about 66 km east or Murrayville, and about 496 km north west of Melbourne.

This was to be our first Victorian National Park activation for the 2018 Activation Weekend for the Keith Roget Memorial National Parks Award (KRMNPA).

Above:- Map showing the location of the Murray Sunset National Park in north western Victoria.  Map courtesy of Protected Planet.

After packing up at Dering, we travelled a short distance down to the town of Patchewollock.  This little town was established in 1914.  The name Patchewollock is derived from two aboriginal words “putje” meaning plenty and “wallah” meaning porcupine grass.  This ‘the place of plenty porcupine grass’.  Despite this being a sleepy little town, there is a bit to see here.  Each year, Patchewollock holds a Music Festival, which commenced in 2012.  More information can be found at…. 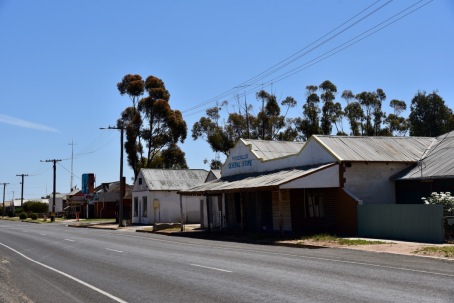 One of the attractions of Patchewollock is the silo art on the local silo grains.  Brisbane artist, Fintan Magee based himself at the local hotel, and met a local sheep and grain farmer, Nick ‘Noodle’ Hulland.  Hulland’s image appears on the silo.  Why Hulland? According to Magee, the rugged, lanky local exemplified the no-nonsense, hardworking spirit of the region.

Another attraction is the Mallee Fowl sculptures in the grounds of the old railway yards.  The sculptures were installed by artist Phil Rigg in 2013. 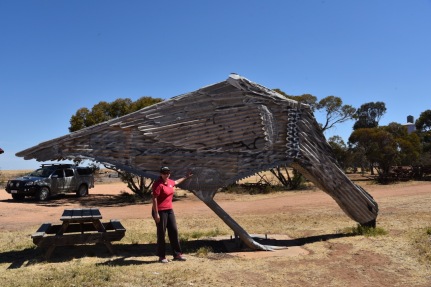 A railway line once ran out to Patchewollock, but is was closed in 1986.  What remains is the historic railway station, constructed in 1919.  Sadly, the goods shed platform and loading platform have been removed. 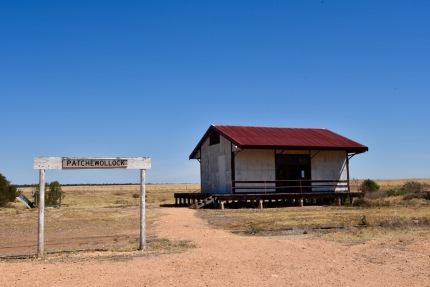 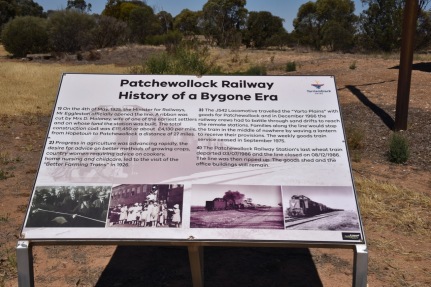 Whilst in Patchewollock Marija worked special event call VI1LWF from the vehicle.

After leaving Patchewollock we drove back north on the Hopetoun-Walpeup Road into Walpeup.  We then travelled west along the Mallee Highway, passing through Torrita, and Underbool.  At Linga we turned right onto Pink Lakes Road.  Aas we drove along Pink Lakes Road I worked Peter VK3YE who was pedestrian mobile.  Marija and I soon reached the park boundary.

The Murray-Sunset National Park is the second largest national park in Victoria, Australia, located in the Mallee district in the northwestern corner of the state, bordering South Australia.  The park is large, comprising 633,000-hectares (1,560,000-acres).  The park was established in 1979, and expanded to encompass the Pink Lakes State Park in 1999.  Over 600 species of plants have been recorded in the park, and 300 species of birds.  Most of the park lies within the Murray-Sunset, Hattah and Annuello Important Bird Area (IBA). 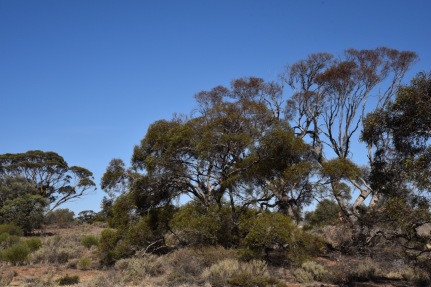 As we entered the Pink Lakes area of the park, our first lake which we encountered was Lake Hardy which is one of four lakes in the park.  Lake Hardy was glowing pink for us.  The lake’s water is actually crystal clear with the bed being made of solid salt. A red pigment called carotene is secreted from the algae that grows in the water which gives the lakes their pink hue.

We continued on to the Lake Crosbie camping area.  There are some nice walks from this point, with interpretive signs along the way.  The camping ground has toilets, gas barbecues, fireplaces and picnic tables. 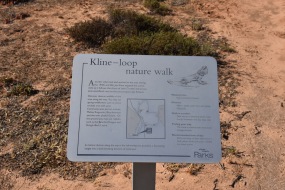 Above:- View from one of the walking trails back towards the Lake Crosby campground

There were a few caravaners in the camping area, but we found a spare shelter, which offered us some shade from the very hot sun.  It had a nice outlook, overlooking Lake Crosby. 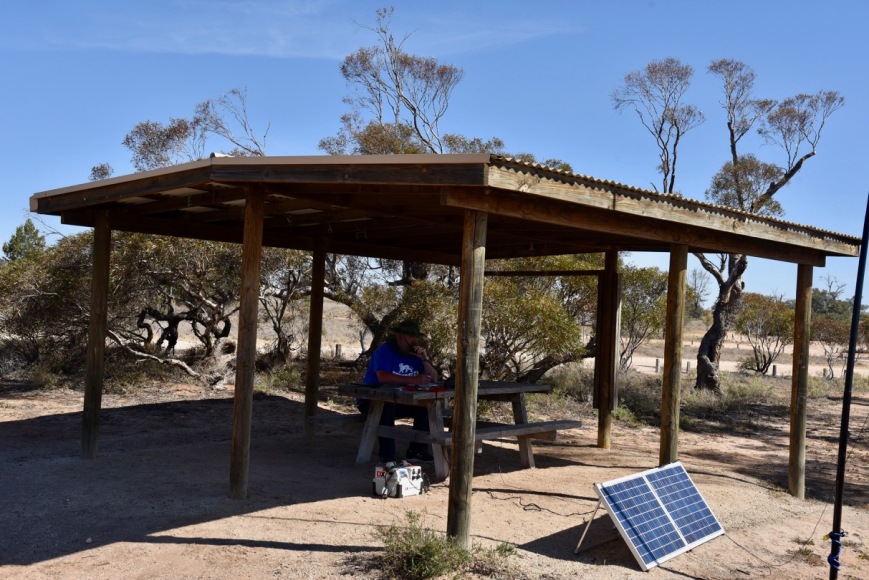 I started off the activation by calling CQ on 7.47.  First in the log was Dean VK3DAE, followed by Geoff VK3SQ, Peter VK3JRT, and then Keith VK2PKT.  By the 13 minute mark I had contact number 10 in the log, a QSO with Gerard VK2IO/p in the Rouse Hill Regional Park VKFF-2784.  I logged a total of 25 stations on 40m from VK2, VK3, VK4, VK5, VK7, and New Zealand.  This included 3 other Park to Park contacts: Peter VK3PF/p in the Morwell National Park VKFF-0626; Alan VK2MG/p in the Hunter Wetlands National Park VKFF-0595; and Neil VK4HNS/p in the Springbrook National Park VKFF-0463.  Regular park hunter, Andrei ZL1TM also made it into my log.

We then headed to the 80m band, where Marija made a total of 9 QSOs, whilst I made 4, including a Park to Park with Peter VK3PF/p in the Morwell National Park VKFF-0626. 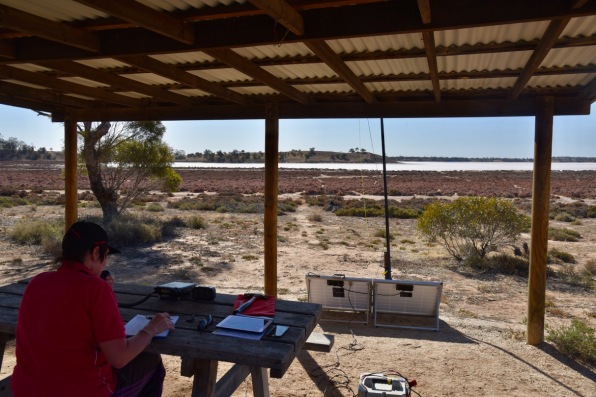 I worked the following stations on 40m SSB:_

We packed up around 6.00 p.m. local time and then drove around the park on Pioneer Drive.  As the day was starting to get a little cooler (but not by much), some of the local park dwellers were out, including kangaroos.

Both Western Grey and Red Kangaroos can be found in the Murray Sunset National Park.  Murray Sunset is home to a number of rare and threatened species. These include the Paucident Planigale (a small carnivorous mouse-sized marsupial), the Regent Parrot and the Millewa Skink.

Above:- A Western Grey kangaroo

There are a number of 4WD tracks through the park, but Pioneer Drive, which is dirt/gravel, is easily navigated using a conventional vehicle.  The first stage of the Drive took us around Lake Crosbie. 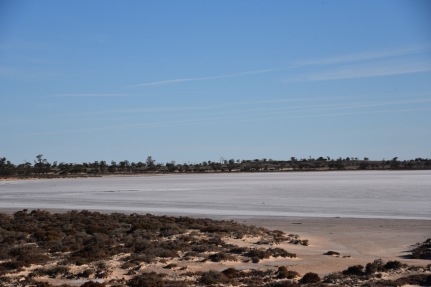 We stopped to have a look at the outdoor salt museum on the eastern side of Lake Crosbie.  There was once a thriving commercial salt industry here, which commenced in 1916 and concluded in 1979 when the area was declared as a State Park.

Marija on top of an abandoned stockpile of salt

We continued along Pioneer Drive to the northern edge of Lake Crosbie.

We then stopped to have a look at Lake Kenyon.

A little further along the drive are a number of interpretive signs which detail the history of salt mining within the park.  During the 1920’s and 1930’s there was a small township at this location for the salt workers and their families.  This included houses, a school, and Otto the cook’s underground house.  Seasonal workers and local farmers also came on foot or by bicycle, horse, or car wo work on salt harvesting.  Camels carried sale to the railway at Underbool and Linga.  A short lived tramway was constructed but later abandoned and replaced by trucks.  Salt was shovelled into bags weighing up to 180 pounds (abt 60 kg) and loaded onto trucks by hand.  Very little remains today. 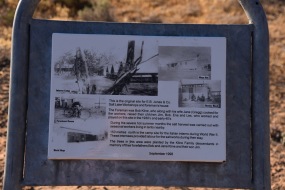 It was a slow drive along the track as there was quite a bit of local wildlife. 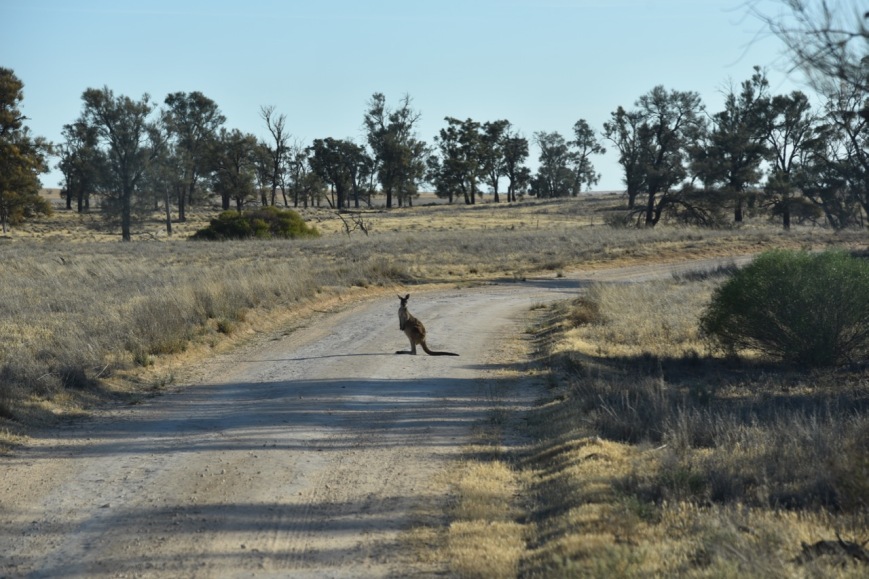 Marija and I highly recommend this drive.  We intend to come back to Murray Sunset, to explore the park further on the many 4WD only tracks.

Above:- Pioneer Drive in the Murray Sunset National Park.

Marija and I then headed back into Murrayville and off to the hotel for a meal.  On the way back to Murrayville I was really pleased to work Juan EA5CTE in Spain, and also Manuel EA8DO in the Canary Islands.  I was cruising along the Mallee Highway at the time, with the cruise control set at about 100 kph.