A few weeks ago, my wife Marija bought me a Tecsun S-2000 short wave receiver and antenna/s for my birthday.  So on Saturday night, for the first time in a long long time, I gave broadcast short wave listening a go.

In a couple of hours of listening, I logged the following stations:-

My receiver is a Tecsun S-2000.  It covers AM, FM, shortwave, longwave and VHF Air Band broadcasts. 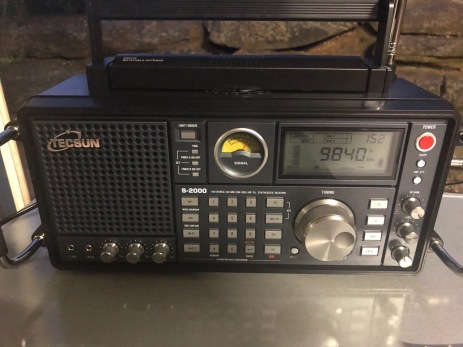 Here is a review of the Tecsun S-2000 by PCJ Radio Network Plus.

My antenna is a Tecsun Shortwave and AM Outdoor Antenna covering 0.5-30 MHz.  It is based on a longwire antenna design but provides significantly improved reception over a longwire because the the Tecsun Shortwave and AM Outdoor Antenna utilises a matching transformer that acts as a balun with a ratio of 10:1.  At the moment the antenna is in a temporary position, just 1.5 metres off the ground (and that is being kind…probably less).  But it does the job.

I have attached below some info and video on the stations I logged.

Next was the Voice of Vietnam 0n 9840 khz.  It is the national radio broadcaster of Socialist Republic of Vietnam.  The first Vietnamese-language radio transmission was made on 2 September 1945, when the President Ho Chi Minh read out the Declaration of Independence.  Prior to 1945, the Vietnamese were banned from owning radio receivers, and broadcasting was under the control of the French colonial government, which established the first radio station in Vietnam, Radio Saigon, in the late 1920s.

I then tuned in to the National Broadcasting Corporation (NBC) in Madang in PAPUA NEW GUINEA.  Madang is the capital of Madang Province and is a town with a population of 27,420 on the north coast of Papua New Guinea.  The NBC is Papua New Guinea’s state-owned broadcaster.  Its head office is in Boroko, Port Moresby, and has approximately 20 locations around the country.

I then tuned in to Reach Beyond Australia on 11865 khz.  This station was previously known as HCJB Australia.  Since 2003, it has been broadcasting from Kununurra in far North West Australia using short wave radio.  The station now broadcasts programs in 29 languages, including 17 South Asia languages.

I also had a look to see what the receiver’s SSB capabilities were like.  I recorded a little snippet of a QSO between Mike VK2BXE and David HC5DX in Ecuador, and Otap YB7TUU in Indonesia.

Overall I had a lot of fun.  I really had not done any broadcast listening on short wave since the 1980’s.  I was also quite pleased with the receiver’s performance and that of the antenna, which currently is very low to the ground.