This year, I have had very little time to get out into the fresh air and operate portable.  Sadly, that dreaded place called work has demanded a huge chunk of my time.  But yesterday, with Marija away on a ‘girls weekend’, I packed the 4WD and headed to the Coorong National Park 5NP-005 & VKFF-0115, to take part in the 2019 John Moyle Memorial Field Day.

Above:- Map showing the location of the Coorong National Park.  Map courtesy of Protected Planet.

The Coorong National Park is a 130 km stretch of saltwater lagoons protected from the South Ocean by the sweeping sand dunes of Younghusband Peninsula.  The park takes its name from the Ngarrindjeri aboriginal word ‘Kurangk’ meaning ‘long narrow neck’.

This is the home of the iconic novel ‘Storm Boy’, which was made into a movie in 1976.  More recently a 2019  version of the movie was released. 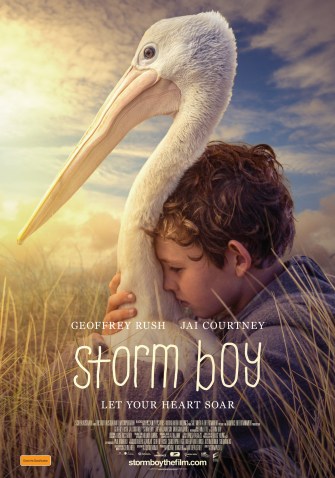 The National Park was established in November 1967 as a sanctuary for the many species of birds, animals, and fish that call the park home.  The park has been recognised by BirdLife International as an Important Bird Area.

The video below should give you an idea of the beauty of this area.

The John Moyle Memorial Field Day (JMMFD) is held annually in March in memory of the late John Moyle, VK2JU.   The aim of the JMMFD is…..

Above:- the late John Moyle, VK2JU.  Courtesy of the WIA

For more detailed information on John Moyle, please see my previous post at…..

I set up at Parnka Point, which was a significant meeting site for the five aboriginal tribes that formed the Ngarrindjeri clan.  Parnka is a Ngarrindjeri word meaning ‘sandy beach’.  As you look out across the lagoon, you can see wooden poles in the seater.  These are the remains of a ferry built last century to access the Younghusband Peninsula. 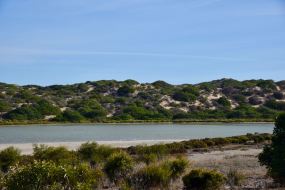 It was a beautiful sunny day, with the temperature around 28 deg C.  Other than some campers, and some fishermen, Parnka Point was fairly quiet.  The waters and sky were alive with birdlife, as it always is, during my visits.  I had encountered a 6-foot long Brown snake on the road, on the way into the park.  Fortunately, that was the only snake I saw during the afternoon.

I ran the Yaesu FT-897 for this activation, with the power output being 40 watts.  My antenna was a 20/40/80m linked dipole, sitting up on the top of a 7-metre telescopic squid pole.  As it was a nice sunny day, I had the solar panels out to top up the battery, a 44 amp hour power pack.  The ‘shack’ was a little shelter shed which overlooked the lagoon. 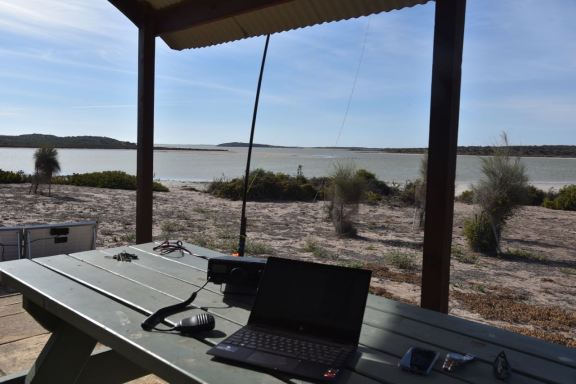 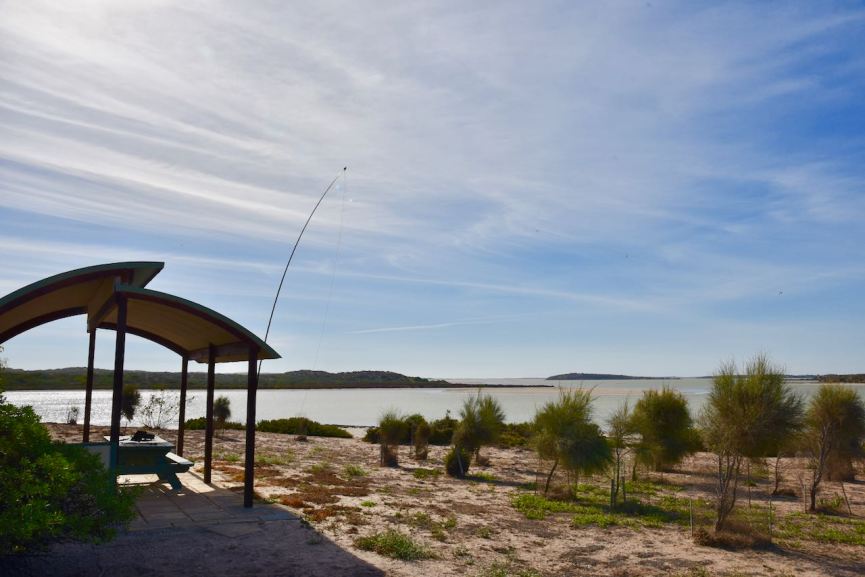 I was situated on a small peninsula with water either side of me, and the Southern Ocean to my west. 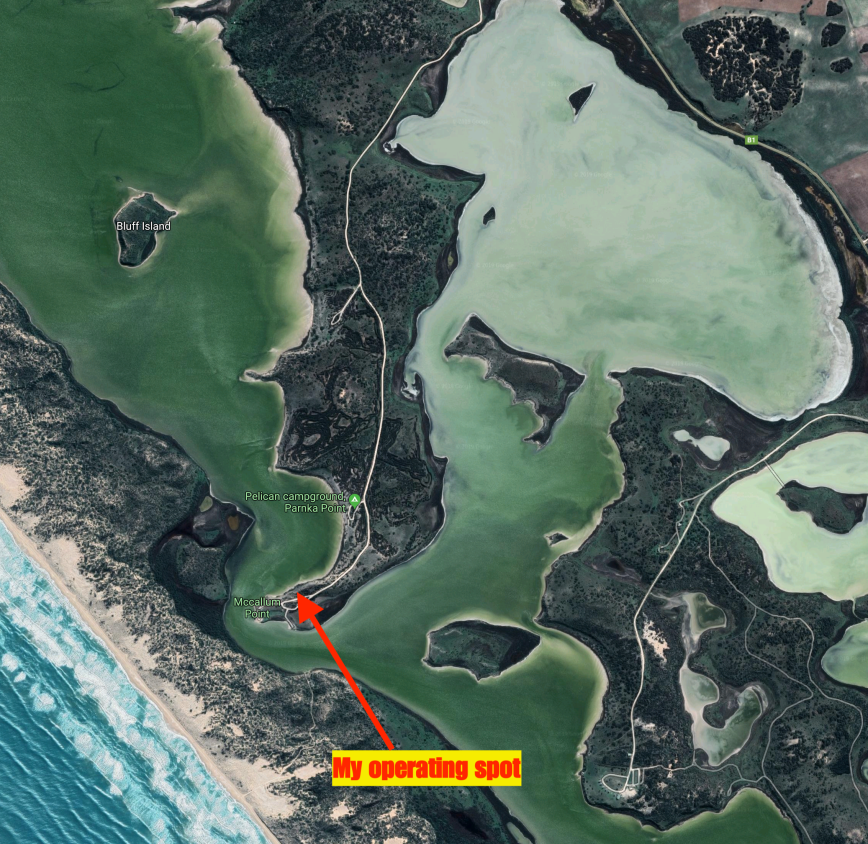 I ran VK Contest Logger on my laptop.  Much easier than paper.

I made the following Park to Park contacts during the activation:-

Some of the highlights of the activation were:- 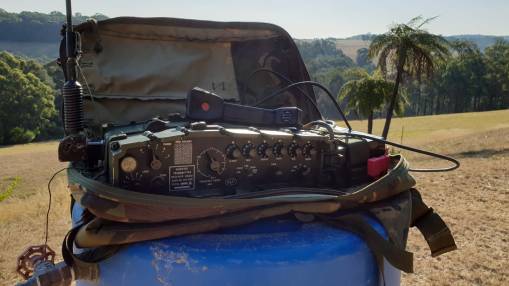 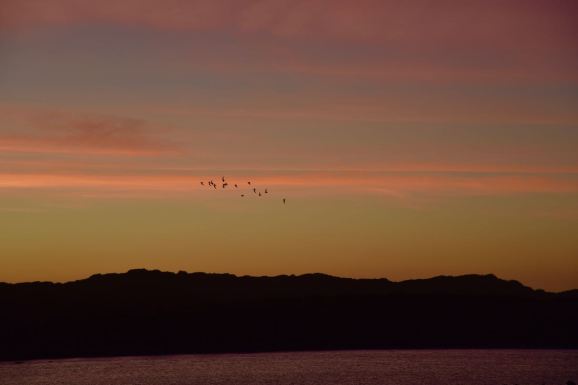 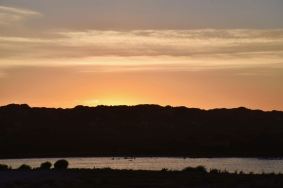 In my 6 hour block I ended up making a total of 187 QSOs on 20, 40 & 80m SSB, with a claimed score of 374 points.  This was down a bit on previous years.  This year I found long periods of calling CQ field day, with no takers.  As this is a ‘contest’ self-spotting is not allowed.  So the usual spots on parksnpeaks did not occur.  There is absolutely no doubt that parksnpeaks increases the number of QSOs in our log.

One of the big problems this year was the static crashes.  They were strength 9 plus at times, and made it extremely difficult picking out the weaker stations that were calling me.  I’m sorry to those who called, who I wasn’t able to pull through.  And I’m sure there were many stations on the east coast who were simply unable to hear my signal.

The graph below shows my activity during the Field Day. 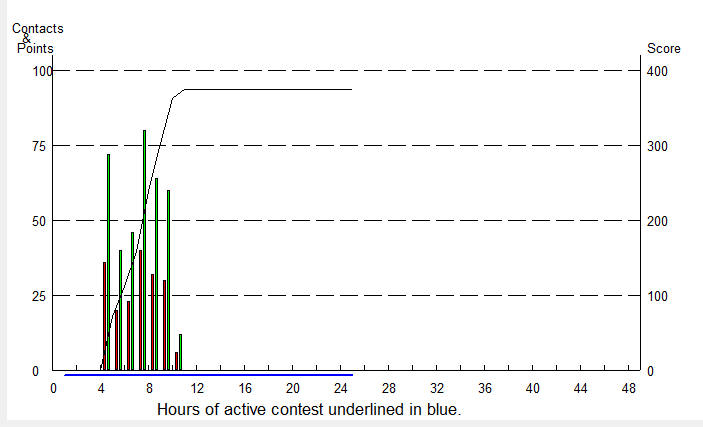 The map below shows my QSOs during the Field Day.  I worked one French station on 40m SSB, and one Italian station on 20m SSB.  Sadly, I didn’t really find a DX opening on 20m, but that may have been as a result of my timing in using that band. 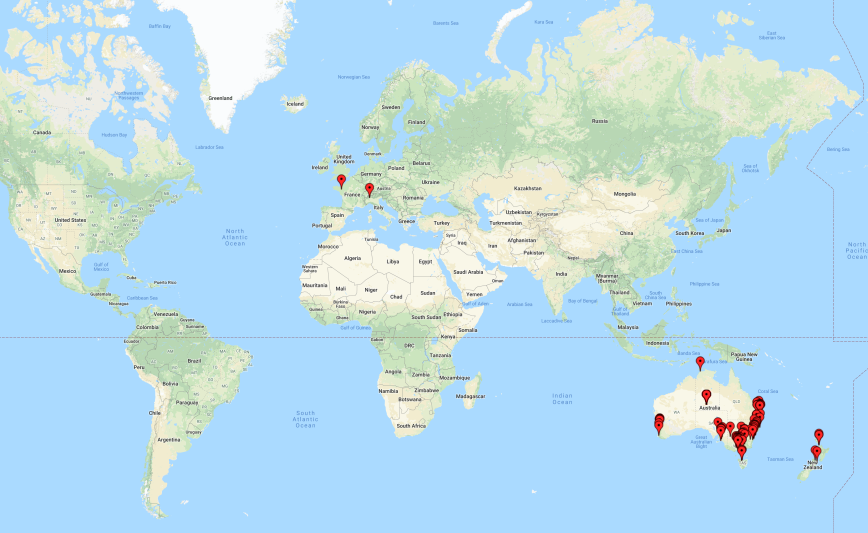 The map below shows my contacts around Australia, and into New Zealand. 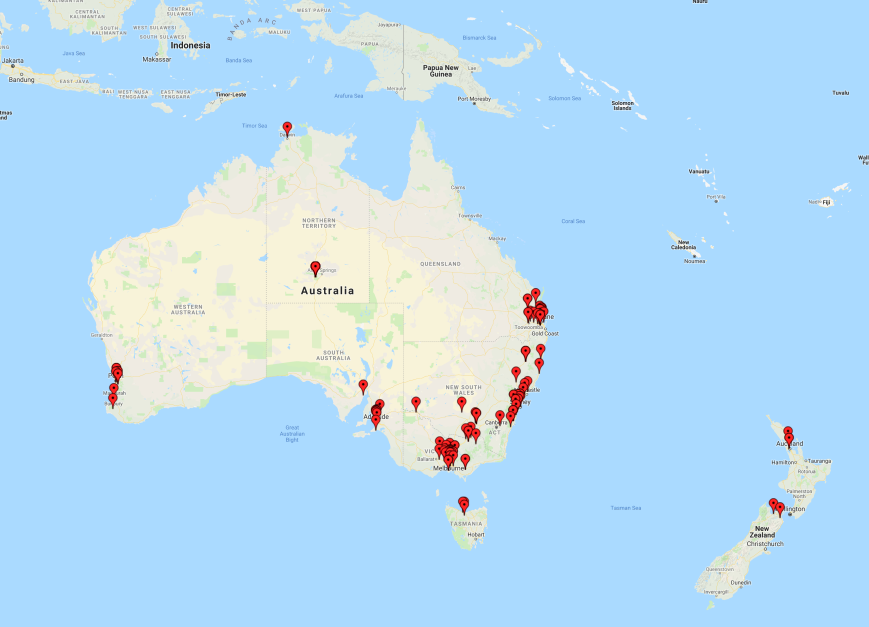 The graph below shows my QSOs during the Field Day.  The majority of contacts, a total of 57, came from Victoria (VK3), followed by New South Wales (VK2) with 47. 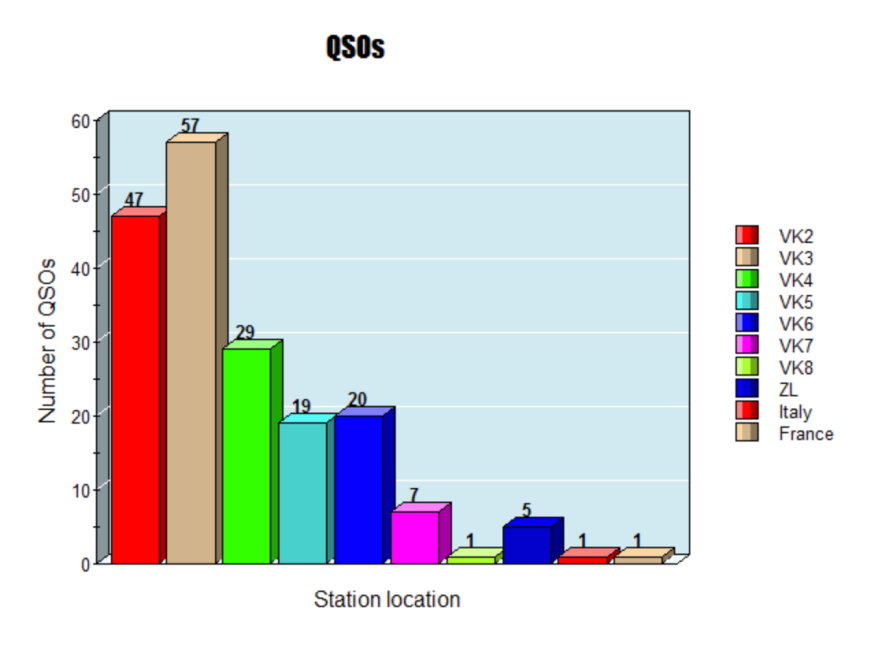 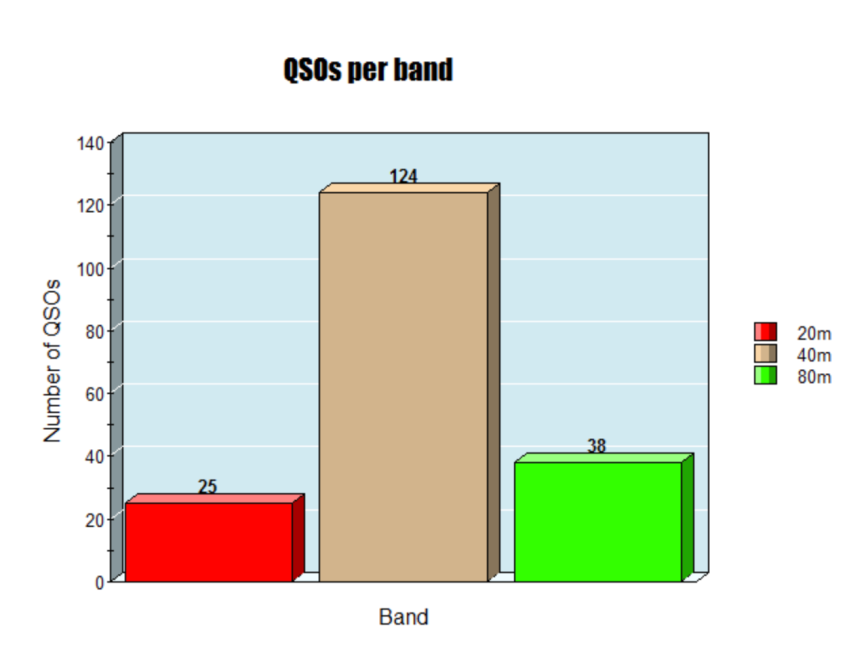