Today (Monday 20th May 2019) is my first of two days off, after working seven straight at work.  Despite the weather forecast not being great, I decided to head down to the Fleurieu Peninsula to activate the Springs Road Native Forest Reserve VKFF-2895.  This is one of the newly added parks to the World Wide Flora Fauna (WWFF) program, and this would be a first-time activation of the park. 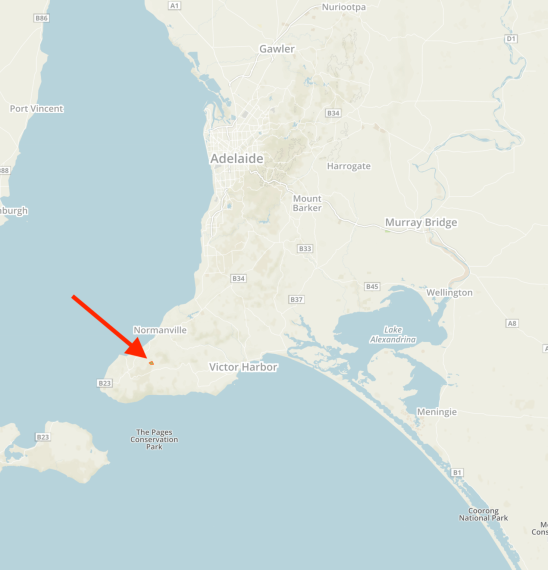 I left home at around 11.30 a.m. local time.  This was about a 90 km drive for me down through the southern Adelaide Hills and onto the Fleurieu.  My first stop was at the town of Myponga where I grabbed a bite to eat.  It is believed the name Myponga comes from the aboriginal word ‘maitpangga’ meaning ‘place of animal food’.  There are however other versions of how the town was named.

After picking up a pie and a drink at one of the local bakeries, I stopped a short distance down the road at the Myponga Reservoir which provides about 5% of the city of Adelaide’s water supply.  The area where I stopped is known as Lovely Valley.  There is a small information board here showing Lovely Valley before it was flooded by the waters of the Myponga Reservoir.  The valley was named by Governor Hindmarsh on his way through the district in 1838.

I continued along Main South Road, with the next town reached being Yankalilla.  I worked here back in the mid to late 1980s.  There are a number of opinions on how Yankalilla obtained its name.  It is suggested that it takes its name from the aboriginal word ‘jankalan’ meaning ‘falling’.  This is from an incident in the myth of Tjibrke, whose sister’s mummified body began to fall into pieces here, as he was carrying it from Brighton to Cape Jervis for burial. 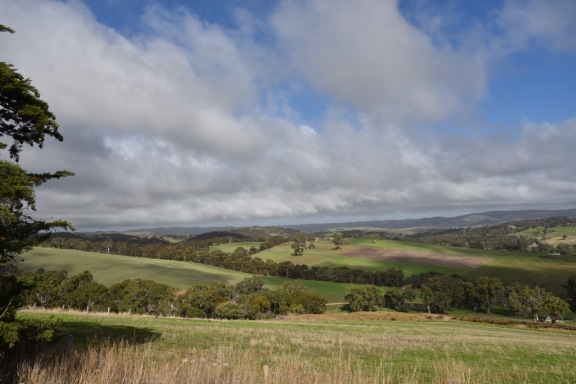 View of land around Yankalilla 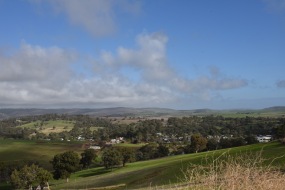 I then took Inman Valley Road, stopping briefly at the Torrens Vale lookout.  This is well worth a stop.  The view here extends from Mount Hayfield in the west where the legendary aboriginal figure ‘Tjilbruke’ rose from the ground to Mount Robinson in the southeast.  The area in between these two landmarks is known as Torrens Vale, formerly called Dairy Flat.

The view from the lookout 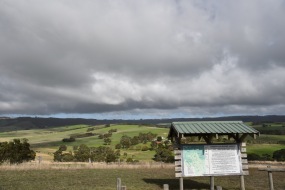 The information board at Torrens Vale

Torrens Vale was an important early settlement from the 1850s.  In its heyday, there were six churches, four cemeteries, a butter factory, post office, blacksmiths shop, store, and a school.   Lieutenant William George Field R.N. first mate of Colonel William Light’s ship the ‘Rapid’, built is homestead ‘Hillside’ near the foot of Mount Hayfield.

From Torrens Vale Road, I took Parawa Road, stopping briefly at the Parawa information board near the Range Road junction.  Prior to the 1930s, the Parawa area remained almost unsettled, except a few hardy folks who grazed sheep.  During the late 1930s and through the 1940s, contractors using heavy machinery and rollers cleared large areas of land for farming.  Today Parawa is of South Australia’s most productive high rainfall regions, supporting Prime Lamb production, dairying and beef cattle grazing.

I travelled west along Range Road and then turned right into Springs Road.  I soon reached the park which was well signposted.

The Springs Road Native Forest Reserve is about 89.6 hectares in size and forms part of the Second Valley Forest Reserve on the Fleurieu Peninsula, south of Adelaide.  The park is surrounded by cleared farming land and pine forest.

Above:- An aerial shot of the park looking north back towards the towns of Normanville & Yankalilla.  Image courtesy of Google maps

The park protects native scrub on the Fleurieu Peninsula which has suffered in the past by activities such as grazing and timber felling.  Less than 15% of the original native scrub remains. 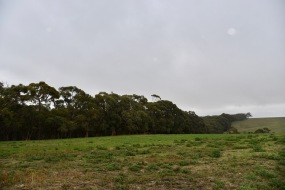 I set up in the southeastern corner of the park off Springs Road, a short distance from Mount Hayfield Road.  There was an area here where I could pull off the road and park at the locked gate.  I walked about 30 metres in along a fire track and set up, running the Yaesu FT-857d, 40 watts and my 20/40/80m linked dipole.

Above:- An aerial shot of the park showing my operating spot in the southeastern corner.  Image courtesy of Protected Planet.

After setting up I headed to 7.144 and asked if the frequency was in use.  Peter VK3PF came back to my call to advise that the frequency was clear.  After logging Peter I was called by Mark VK4SMA, then Geoff VK3SQ and John VK4TJ.  It took me just 6 minutes to qualify the park for the VKFF program, with contact number ten being with Ray VK4NH.

Despite it being a weekday, it was pleasing to see a steady flow of callers.  I logged a total of 24 stations on 40m before callers dried up.  I had not logged any local South Australian stations on 40m and it appeared there was no close in propagation on that band.  So I headed down to 80m and called CQ on 3.610.  First in the log was David VK5PL with a strong 5/9 plus signal.  David had posted on Facebook that he was unable to hear me on 40m so it was good to be able to get David in the log on 80m.

Unfortunately, I only logged 3 stations on 80m, all VK5’s, despite the band being in very good shape.  I then headed off to the 20m band.  I called CQ on 14.310 and logged Mark VK4SMA, followed by Kevin VK6AB/p.  To my surprise, my tenth contact on 20m was with Karl VE6KDX in Albert Canada.  This was followed by Bobby AJ4EN in South Carolina in the USA.  I also logged Paul ZL2CQ and Ken ZL4KD in New Zealand.

With 15 stations in the log on 20m and small drops of rain, it was time to head back to the 40m band to pick up 2 more contacts for my 44 QSOs required to qualify the park for the global WWFF program.

I called CQ on 7.144.  Joseph VK5WU came back to my call, followed by Brett VK2VW, and then Peter VK3KAI/VK3GV.  The rain was starting to get heavier.  I put out a last quick call and logged Ken VK3UH and then Alan VK2MG.  Sadly I had to go QRT, as the rain was really starting to come down heavy now.  I’m sorry to anyone else who was there waiting to work me.  I will return to the park.

Thank you to everyone who called and a big THANKYOU to those who took the time to spot me.  Sadly it continues to be the same people over and over again who spot on parksnpeaks.  Many use it to their advantage, but never spot, which is rather disappointing.