Our third and final park for the day was the Marne Valley Conservation Park VKFF-0906.  This was another park that Marija and I had previously activated from and qualified.  The park is located about 106 km northeast of the city of Adelaide.

Above:- Map showing the location of the Marne Valley Conservation Park northeast of Adelaide.  Map courtesy of Protected Planet.

Marne Valley Conservation Park is about 94 hectares in size and was first proclaimed on the 11th day of March 1976.  The major vegetation association being River Red Gum open forest.  The southwestern corner, along the eastern central boundary, and along the northern boundary the native vegetation has been largely cleared.  The park is bisected by the Marne River.

Prior to the establishment of the park, the land was part of the main Adelaide to Sydney stock route. 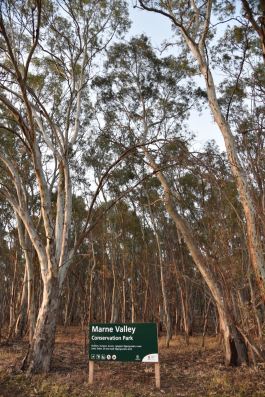 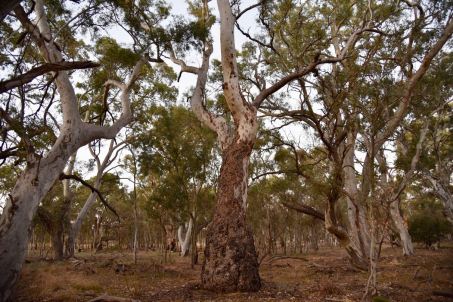 The Marne River was originally known as the ‘South Rhine River’ until 1918 when it was renamed due to anti-German sentiment.  It was named the Marne due to a 1914 German advance of troops was checked at the Marne River in France.  Anti-German feeling ran high during World War One and a Nomenclature Committee was set up to make recommendations for changes from names of “foreign enemy origin” to British or South Australian native names.   The Committee suggested ‘Pongaree River’ meaning ‘shade reflection in water’ but it was rejected by the government. 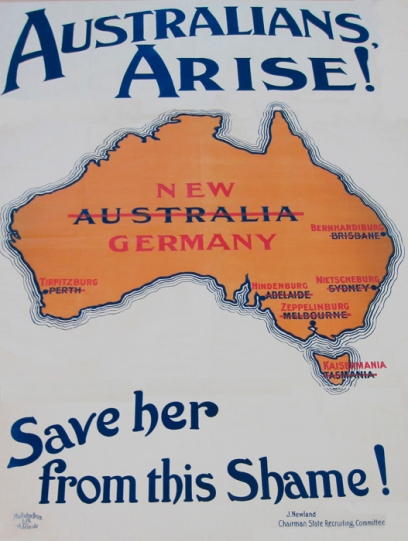 In pre-European times, the Ngarrindjeri aboriginal people used the Marne Valley as a route up into the hills to trade with the Peramangk people in the Barossa Valley and to cut bark canoes from the River Red Gums in the hills which had thicker bark than those near the Murray. The original name of the Marne River was Taingappa, meaning “footrack-trading road”. Above:- An aerial view of the Marne Valley Conservation Park.  The nearby turf farms can be seen.  Image courtesy of Google maps.

I have been to the park many times before and have always access it via Black Hill Road.  This time Marija and I decided to see if we could get into the park a different way.  We travelled down Muellers Road hoping to access the park via Havelberh Road.  However, the road had a locked gate and access was not possible.

We continued north along Muellers Road and turned left onto Sleep Track and headed west.  We then reached an un-named dirt road and travelled south down to the north-western corner of the park at Havelberg Road and Tamkes Road.  We travelled down Tamkes Road but could not find a suitable spot.  We also travelled east on Havelberg Road following the northern boundary of the park.  There was no shade so we decided to head back around to Black Rock Road.

Above:- The northern side of the park on Havelberg Road.

Once we got to the Black Rock Road entrance to the park I noticed that a pedestrian gate and new park sign had been installed since my last visit.

Above:- The Black Rock Road entrance on the southern side of the park.

There was plenty of room here to string out the 20/40/80m linked dipole.  We used one of the fence posts as a securing point for the telescopic squid pole, with the help of an octopus strap.

Above:- An aerial view of the Marne Valley Conservation Park showing our operating spot in the southern part of the park.  Image courtesy of Protected Planet.

Unfortunately, the static crashes had not subsided, nor had the contest traffic.  As a result, it was very hard to find a clear spot on the 40m band.  I called CQ on 7.142 and Mark VK4HYD called soon after, to be number one in the log.  Lee VK2LEE followed, then Wayne VK7NET, and then Mark VK4SMA.

But it was really tough going, and with just 9 contacts in the log, callers dried up.  It was at this time that I swapped the mic with Marija.

We decided to tune across the band to see if I could work some of the ‘big guns’ in the CQ World Wide Contest.  The first DX station to be logged was Dan W7WA in Washington state.  Next was VK9NC on Norfolk Island, followed by KL7RA in Alaska.

KL7RA was so strong that I decided to get Marija to give him a call.  And with a legitimate 10 watts, Marija logged Alaska (after a few repeats of her call sign).  This was Marija’s first-ever contact into Alaska.

I then logged VK6LLL, K3EST in California, and VK4SDD.  I tried calling some of the other DX stations, but my 40 watts and little bit of wire just weren’t cutting through.

To complete the activation I went back to 40m.  I again tried calling some of the contest stations, but I just wasn’t getting through all the interference.  The band was extremely busy.  I logged just the one station K7RL in Washington.

Our second park for the 2019 VKFF Team Championship was the Ridley Conservation Park VKFF-0932.  The park is located about 121 km (by road) north-east of the city of Adelaide. 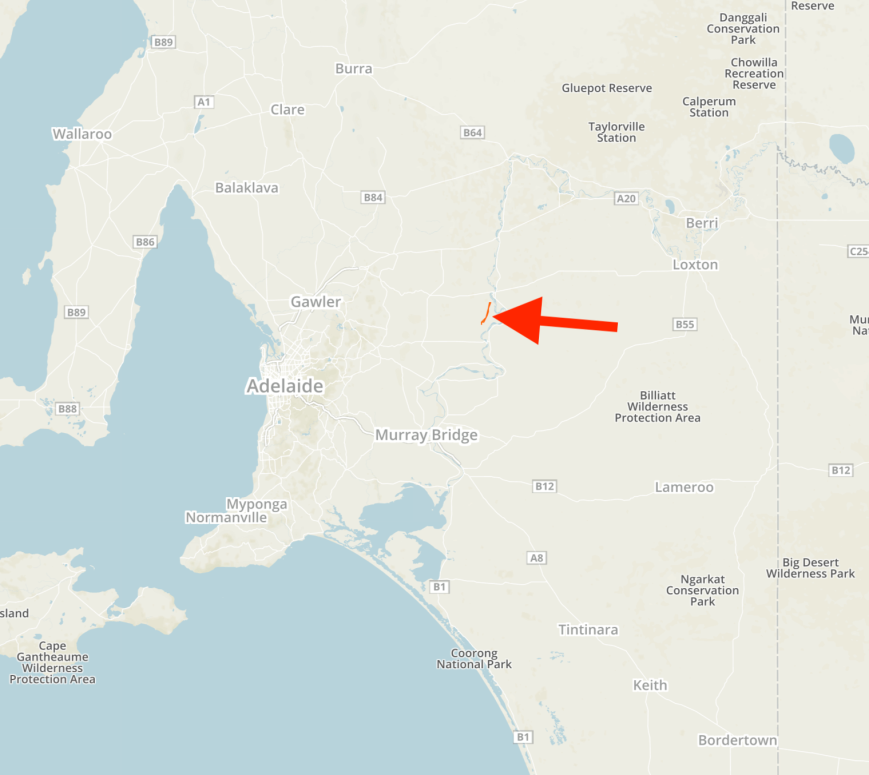 Above:- Map showing the location of the Ridley Conservation Park northeast of Adelaide.  Map courtesy of Protected Planet.

After packing up at Swan Reach we travelled east back along the Stott Highway and then turned right onto Murraylands Road and headed south.  We stopped off briefly at the Marks Landing lookout.  There are some great views here of the Murray River across to the town of Swan Reach. 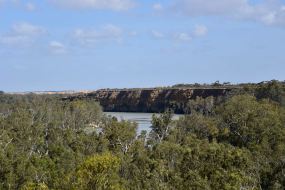 The Ridley Conservation Park is about 414 hectares in size.  It is a long narrow park measuring 10 km in length and 400 metres in width.  The park consists of two major vegetation formations: 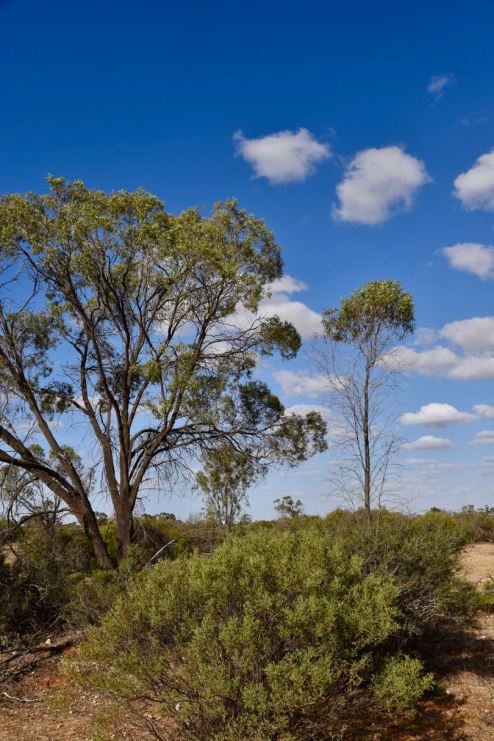 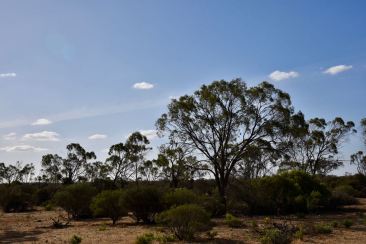 The park was part of the Travelling Stock Reserve which ran for about 5-10 km parallel to the Murray River.  This part of the reserve linked the stock market of Burra in the north of South Australia, with Murray Bridge to the south.

During 1966 when the land was being resumed and purchased for the purpose of national parks, the Land Board proposed that portions of the Travelling Stock Reserve be retained and dedicated as a Wildlife Reserve.  The park was first proclaimed as the Ridley National Parks Reserve on the 30th day of May 1968.  It was re-proclaimed on the 27th day of April 1972, as the Ridley Conservation Park. Above:- An aerial view of the Ridley Conservation Park.  Image courtesy of Google maps.

The park was originally set aside to conserve native vegetation and bird habitats, but in addition, the open areas of the park include a number of warrens of the Southern Hairy-nosed Wombat.  Other native animals found in the park include echidna and Western Grey kangaroos.

During our visit to the park, we observed one wombat, who was very quick on his/her feet but did stay still long enough for me to get some photographs (see below).

We drove a short distance off the road into the park off Murraylands Road and set up under the shade of some vegetation.  We ran the Yaesu FT-857d and the 20/40/80m linked dipole for this activation.

Above:- Map of the Ridley Conservation Park showing our operating spot.  Map courtesy of Protected Planet.

The 40m band was very busy due to the CQ WW Contest and it was very hard to find a clear frequency.  Compounding issues was the 5/9 plus static crashes due to storm activity around Australia.  I found 7.115 clear and started calling CQ.  First in the log was Ron VK3APP, followed by park regular Rob VK2VH, and then Peter VK3ZPF who is another VKFF devotee.

I logged a total of 12 stations on 40m, with conditions being quite poor.  I then swapped the mic with Marija.

Marija called CQ and this was answered by Rob VK2VH, followed by Adam VK2YK, and then Peter VK3PF.  Marija had quite a steady flow of callers which was very pleasing.  We also logged further Park to Park contacts with Rob VK4SYD/p and Scott VK4CZ/p who were activating the Samford Conservation Park VKFF-1639, and Deryck VK4FDJL/6 who was in the Frankland (South) National Park VKFF-0653.

Marija logged a total of 18 stations on 40m, before handing the mic back to me,  I called CQ on 7.115, but only managed 2 further callers, Steve VK3YW and Craig VK2KDP.  The contest interference became so bad that we decided to head down to 80m.

Together, we logged a total of 10 contacts on 80m into VK3 and VK5.  This included a Park to Park contact with Mike VK6MB/5 who was activating the Franklin Harbor Marine Park VKFF-1709 on the Eyre Peninsula.

I decided to have one last go on 40m.  But I was to be very disappointed, with just one contact logged, that being with Lee VK2LEE.  The contest QRM and the static crashes proved to be the winner.

We then packed up and headed off to our final park for the day, the Marne Valley Conservation Park.

We drove west on the Black Hill Road and took a short detour into Shell Hill Reserve.  We have been here before, but it is a very interesting place.  Shell Hill is a deposit of oyster shells believed to be the only shell deposit of its type in the Southern Hemisphere.  It was originally part of a shallow sea which occupied the Murray River Basin millions of years ago.

During the early 1930s, a company called Ellis & Clarke realised the value of the shell as a fertiliser and work commenced on a crushing plant in the gully below the deposit.  A 50-metre long chute fed the plant from the shell deposit.  The crushed shell contained a high percentage of lime and was used in agricultural pursuits.  Sir  Thomas Playford, the South Australian Premier used a significant quantity for his orchards in the Adelaide Hills.  The plant ceased operation in 1946. 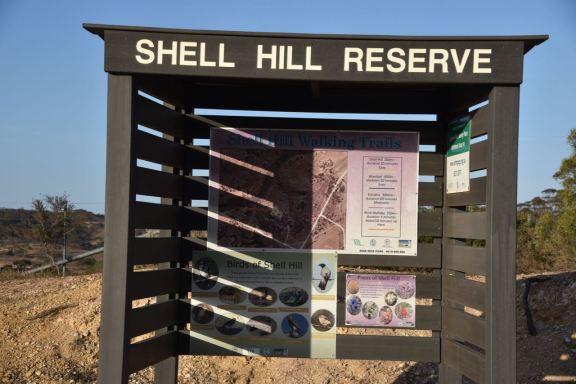