After dinner on Friday night (29th November 2019) I decided to head out to the Little Desert National Park VKFF-0291 for a quick night time activation from the vehicle.  I have activated and qualified Little Desert previously.

The park is located about 375 km northwest of Melbourne.

Above:- Map showing the location of the Little Desert National Park.  Map courtesy of Protected Planet.

It was just a short drive from the motel to get to the park.  I travelled to the intersection of Llyod Street and Wimmera Street where there is a large sign for the National Park. 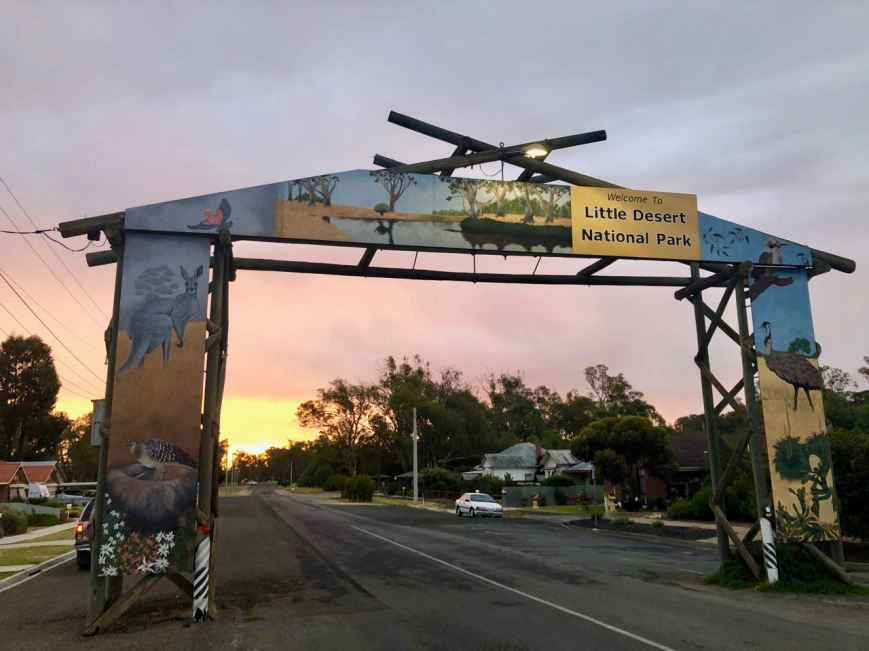 I then drove out along Horseshoe Bend Road, following the Wimmera River.  I soon reached Horseshoe Bend.  This is located at the north-eastern corner of the park.

It was just after 8.30 p.m. and the sun was setting.  I enjoyed a magnificent sunset and even a rainbow. 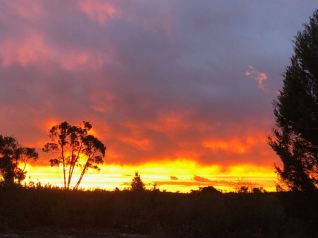 I stopped in the Horseshoe Bend camping area and joined the 7.130 DX Net.  I ran the Icom IC-7000 from the vehicle, 100 watts, and the Codan 9350 self-tuning antenna mounted on the rear of the Toyota Hi-Lux.

The Little Desert National Park is 132,647-hectare (327,780-acre) in size and was established in 1988.  The park is broken up into three blocks: Western, Central & Eastern.  Although the park’s name suggests that it is a desert, it is in fact not the case.  The park is far from a baron desert.  In fact, about 670 species of native plants have been recorded in the park.  The vegetation of the park ranges from pure mallee heathland in the Eastern Block to cypress pine and casuarina woodlands in the moister Western Block. In the Western Block, there are large areas of seasonal swampland formed over claypans.

Prior to the European settlement of the area and the establishment of the Little Desert National Park, Wotjobaluk aboriginal family groups camped along the Wimmera River.  Wotjobaluk territory took in about 12,000 km2.  A famous Wotjobaluk man was ‘Dick-Dick’ whose traditional name was Lavanya, Jumgumjenanuke or Jungunjinuke.  He was an aboriginal tracker and cricketer.  In 1868, he was a member of the first Australian cricket team to tour England.  This team was entirely composed of aboriginal men.

Marija and I have previously visited The Johnny Mullagh/Harrow Discovery Centre in Harrow in southwestern Victoria.  The museum features numerous exhibits relating to the Australian aboriginal cricket team which toured England in 1868.  I suspect not many Australians would know that this was the first Australian cricket team to tour England, and was comprised of aboriginals.

Above:-  ‘Dick-a Dick’ or ‘King Richard’.  Image courtesy of Wikipedia.

The history behind the Little Desert National Park is well documented and is very interesting.  Below you can read a summary which I hope you find as interesting as I did.

From the 1840s European grazing of the area commenced, however, this had ceased by the 1960s as the low nutrient sandy soil and low rainfall made farming difficult.  During the Second World World War, the Central Block was used as a bombing and gunnery range and the remains of several concrete observation bunkers are still present.

In 1955 the Kiata Lowan Sanctuary, comprising 218 hectares, was established to preserve the ‘Eastern block’ of the Desert and protect the local Malleefowl. 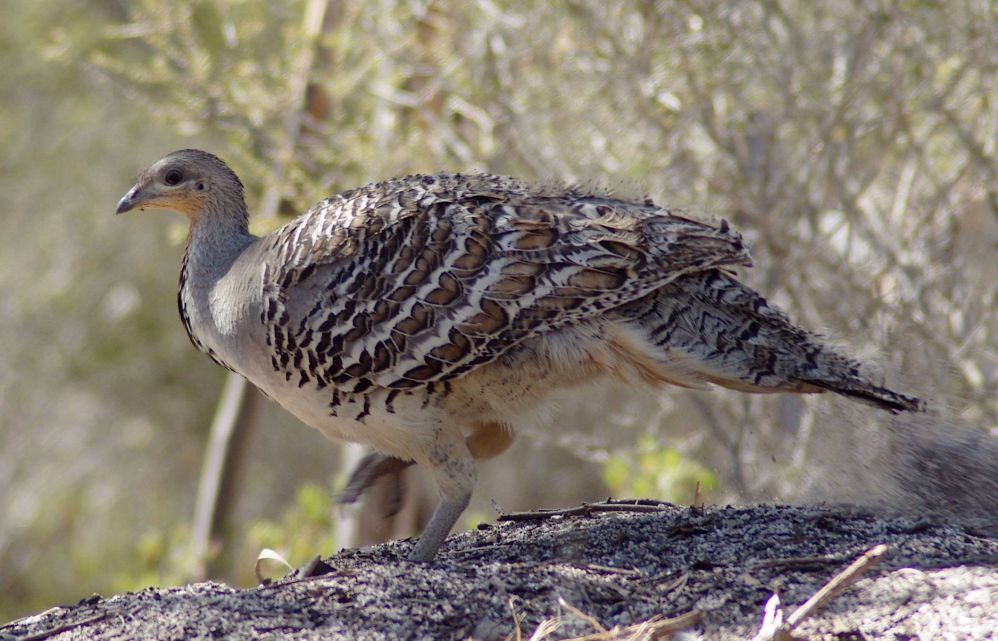 Above:- Malleefowl.  Image courtesy of Wikipedia.

In 1963 the AMP Society proposed to subdivide and clear the Little Desert for agricultural and pastoral purposes.  During the 1950’s AMP had developed some land in the area, however this would be a much larger venture.  In 1967 the scheme was abandoned due to declining wool and wheat prices, and government indecision.

In 1968 the Kiata Lowan Sanctuary was gazetted as the Little Desert National Park and increased to an area of 945 hectares.

In early 1968 Sir William John ‘Jack’ Farquhar McDonald (1911-1995), the Victorian Minister of Lands announced the Little Desert Settlement Scheme.  This involved the establishment of 48 wheat farms in the area and further the settlement of Australia’s semi-arid land.  The scheme was opposed by agricultural experts, economists, and conservationists.  McDonald had a personal interest in the area as he was a farmer with properties on both sides of the Victorian-South Australian border.  One of those abutted the Little Desert.

Opposition to selling the land for farming was intense and quickly gathered support around Victoria.  Conservationists established the Save our Bushlands Action Committee.  Two major public meetings were held in Melbourne in 1969, each attracting over 1,000 people.  Local people from the Wimmera also ran a campaign against the scheme.  Valerie Honey, a Wimmera local, and Gwynetteth Taylor, the President of the Victorian National Parks Association were instrumental campaigners.

In a letter to The Age newspaper in April 1969, Gwynneth Taylor wrote:

“At a time when we are told that primary producers are facing many problems in satisfactorily disposing of their present level of production, it seems incredible that Sir William McDonald is intent on opening up yet more Crown Land…..(The Little Desert is ) known to be only marginal country-requiring….large capital expenditure and….highly expert farm management.  No complex fauna study of the Little Desert has ever been made and it is more than likely that much knowledge is yet to be gained from the area”.

By mid-1969 McDonald had scaled back the original Settlement Scheme to just 12 sheep farms and announced that the National Park would be expanded to cover 35,000 hectares.

On the 14th day of October 1969, a Select Committee was established by Labor Member of Parliament John William ‘Jack’ Galbally (1910-1990, to enquire into the Scheme.  The Committee was known as The Little Desert Settlement Committee. 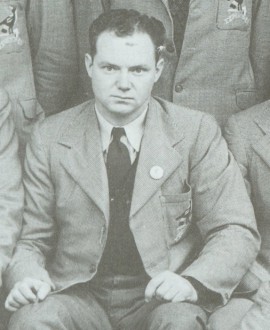 A number of leading ecologists including Dr. Peter Attiwell and Dr. Malcolm Calder gave evidence to the Committee about the natural values of the Little Desert.  Sir William McDonald declined to appear before the committee, with his Secretary of Lands, Alan Judge, appearing in his place.

Above:- Dr. Malcolm Calder.  Image courtesy of The University of Melbourne.

The Victorian State Government, led by Henry Bolte, was initially unmoved by environmental concerns.  However, in December 1969 the Victorian Liberal Government lost the Dandenong by-election, partly due to public outrage over the proposed Little Desert Scheme.  The Legislative Council voted to block the scheme and the clearing scheme was abandoned.

During the 1970 Victorian State Election, Premier Bolte promised to extend National Parks so that they covered 5% of Victoria’s area.  A new independent body was promised, the Land Resources Council (later named the Land Conservation Council, and now known today as the Victorian Environmental Assessment Council) whose role was to systematically and independently review all future public land use across the state.

Above:- Newspaper article from the Canberra Times, 10 Dec 1969.  Image courtesy of Trove.

The Liberals won that election with a slightly reduced vote, and William McDonald lost his seat after 15 years as the local member.

The architect of the Land Conservation Council was the newly appointed Minister of Lands, William ‘Bill’ Borthwick, who supported retaining the area as a nature reserve.

About 60 species of mammals and reptiles call the park home.  Over 200 species of birds can be found in the park, which has been identified by BirdLife International as an Important Bird Area because it supports populations of malleefowl and Diamond Firetails finches.

Above:- An aerial view of the Little Desert National Park, looking to the west towards the South Australian border.  Image courtesy of Google maps

I logged four stations on the 7130 DX Net, Peter VK2STO/4, John VK2FALL, Gary ZL3SV in New Zealand, and Lee VK7FLAR.  Things were moving slowly on the net and I was getting a bit tired, so I moved up the band where I logged 8 stations from VK2, VKJ3, VK4, and New Zealand.

After an hour in the park, it was time to head back to the motel.