This contest commemorates those amateur radio operators who died during World War Two, and is designed to encourage friendly participation and help improve the operating skills of participants.  The RD Contest is held on the weekend closest to the 15th August, the date on which hostilities ceased in the southwest Pacific area.

The aim of the RD Contest is for amateurs to endeavour to contact amateurs in VK call areas, ZL and P29 on all bands except WARC bands.  Modes allowed are voice, CW and RTTY as per the era remembered.

The surrender of Imperial Japan was announced by Japanese Emperor Hirohito on August 15 and formally signed on September 2, 1945, bringing the hostilities of World War II to a close.

I ran my Yaesu FT-857d, 30 watts, and the 20/40/80m linked dipole for the Contest.  I was operating from my back verandah overlooking the paddocks.  The antenna was inverted vee configuration, just 7 metres at the apex, with the ends tied off low to the ground.

Above:- “My shack” for the RD Contest

I then moved to the 20m band where I logged just 5 stations from VK4 and VK6.  Conditions appeared to be quite poor on this band.

I logged 88 stations on 40m, before trying the 20m band.  Band conditions on 20m didn’t seem to be much better than Saturday, with just 10 stations logged from VK2, VK4, and VK6.  I cannot wait to get my 5 element bean back up in the air.  It was hard going with just 30 watts and a piece of wire.

I logged a further 41 stations on 40m until the end of the contest at 0300 UTC.   My final contact was with John VK7FJFD.

I ended up logging a total of 402 contacts, which I was quite happy with, considering my operating conditions and that I had not burnt the midnight oil.

Above:- Map showing my contacts during the Contest.  Courtesy of QSOmap.org

The vast majority of my contacts were in to VK3 (Victoria), followed by VK2 (New South Wales).  I didn’t log a single New Zealand station during the Contest, and only heard one ZL station working another VK. 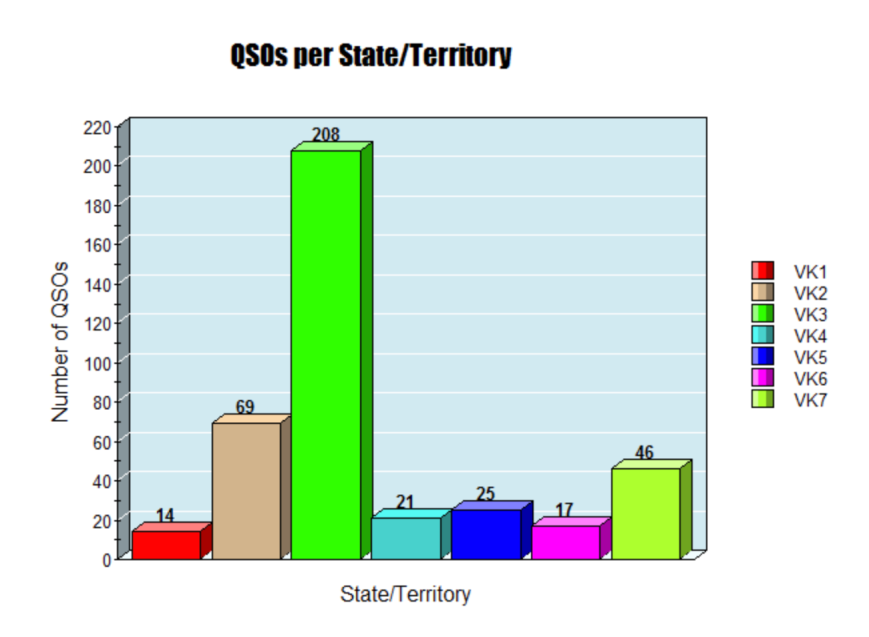 Above:- Graph showing my contacts per State/Territory.