On Sunday morning, 17th November, 2013, Marija and I left the Pinnaroo cabins, and again headed across the border into north western Victoria.  We drove into the little town of Murrayville, and then travelled about 30 km along the Murrayville Track, until we reached the Wyperfeld National Park.

Wyperfeld National Park is the third largest National Park in Victoria and covers an area of 3,570.17 km².  It was declared in 1921, and has been significantly expanded since that time to protect a huge area of mallee, woodland, and heartland in the north west of Victoria. 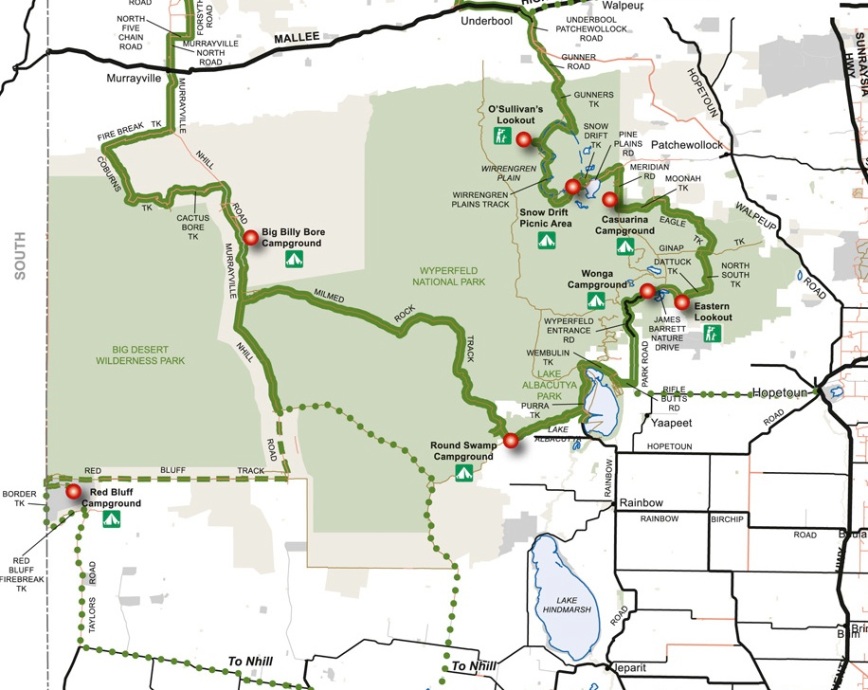 Wyperfeld contains numerous sand dunes and these are estimated to be between 40,000 and 15,000 year old.  Wyperfeld was once a shallow sea from about 25 million years ago.  As the seas slowly retreated, the westerly winds blew sand over the exposed inland areas, which resulted in the rolling sand dunes that you see today.

Wyperfeld was originally home to the local aboriginal people, the Wotjobaluk, who regularly travelled up and down Outlet Creek, visiting the lakes and swamps in their quest for water and food.    They called Outlet Creek, ‘Tyakil-ba’Tyakil’.  Outlet Creek snakes its way through the centre of the park.  The first European to venture along Outlet Creek was James Clow, who in 1847, established the first pastoral run.

By the early 1900’s, the mallee of Victoria was a fast disappearing habitat.  And luckily, by 1909, a number of naturalists persuaded the Victorian Government to temporarily reserve 3,900 hectares.  By 1921, the park was declared.  The name, Wyperfeld, is of Germanic origin, and was most likely given by the Germanic settlers who came to the Wimmera and Mallee regions from South Australia.

Fortunately Spring is the best time to see the wildflowers in the park.  And there were quite a few plants out in flower that we saw.  About 520 species of native plants occur in the park.  River Red Gum and Black Box woodlands cover the floodplains of Outlet Creek and the lakes within the park.  Cypress-pine woodlands grow on the dunes near the lakes.  On the eastern side of the park, mallee is the predominant flora.  In the western section of the park, heathland covers the rolling sand plains. 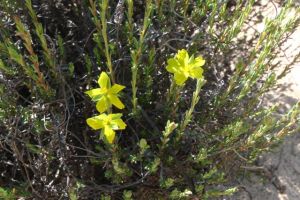 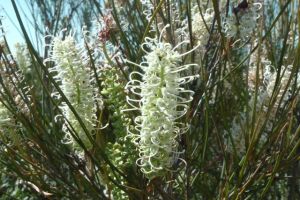 More than 200 species of birds have been recorded in the park, including the Sulphur Crested Cockatoo, Emus, Mallee Ringneck Parrot, Red-rumped Parrot, Galah, Variegated Fairy-wren, & Red-capped Robin.  Wyperfeld is part of the Wyperfeld, Big Desert and Ngarkat Importand Bird Area, which has been identified as such by BirdLife International, due to its importance for the conservation of the rare Malleefowl and various other mallee bird species.

A large variety of reptiles can be found within the park.  They include the Sand Goanna, dragons, skinks, and geckos.  We saw literally hundreds of lizards sunning themselves on the Murrayville Track.  Surprisingly, snakes are rarely seen in Wyperfeld NP. 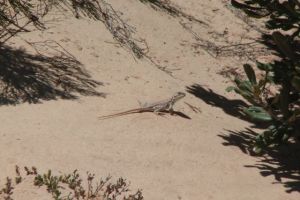 Marija and I pulled up at the Milmed Rock 4WD track, and set up the gear here.  It was already very warm, and safely there was no shade.  I could see some small gum trees about 2 km into the bush, but I didn’t fancy trying my luck along Milmed Rock Track, as it was very very sandy and suitable for 4wd only. 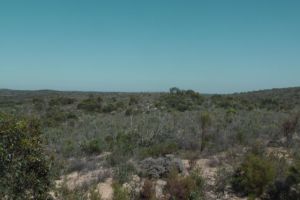 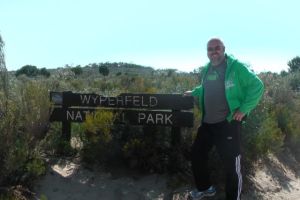 Fortunately the track ran north – south, so I set up the 40m dipole using my 7 m squid pole, and tied off the ends to some of the small native shrubs.  We set up the folding table and deck chair, and away I went.  My first contact from within Wyperfeld was with Peter VK3YE who was sitting on the end of a concrete pier at Chelsea Beach in Melbourne.  Peter had a great signal as always from his QRP pedestrian mobile set up (5/8 both ways).  This was followed by a  steady flow of callers from VK3 & VK5, including Tim VK3MTB who was operating portable from Morwell National Park, and Tony VK3VTH who was operating portable from the Lower Glenelg National Park. 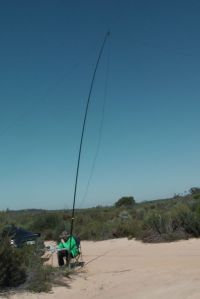 I then decided to tune around the band to see if I could pick up a few more park activators, and was fortunate enough to speak with Ben VK3FTRV who was portable north of Halls Gap, in the Grampians National Park, using his full wave loop antenna.  I then spoke with Larry VK5LY who was portable in the Murray Sunset National Park, and then stumbled across Andy VK5AKH who was operating portable from the Morialta Conservation Park, as part of the VK5 National and Conservation Parks Award.

The 40m band was in quite good condition and was very busy.  The Ballarat Amateur Radio Club were also holding their annual Field Day and I propped on 7.085 and I worked a number of their members, operating portable in the field.  Joe VK3YSP, who was operating portable from the Dandenong Ranges National Park, with his wife Julie VK3FOWL, called in to say hi.

After working a number of stations I decided to tune across the band again, and I spoke with Peter VK3ZPF who was active again on a SOTA peak.  This time, Mount Ida, VK3/ VU-009, which is also within the Heathcote-Graytown National Park.  I was really happy to find Peter, because this was a new Victorian park for me.  Peter was kind enough to leave me his frequency, and again I worked a steady flow of park Hunters.  This included Andy VK3CAH who was portable in the Kara Kara National Park, and Andrew VK1DA/2 who was portable on SOTA peak, Spring Hill VK2/ ST-036.

As the day progressed, it was getting hotter and hotter, so I improvised and used an umbrella from the boot of the car to offer me some shade. 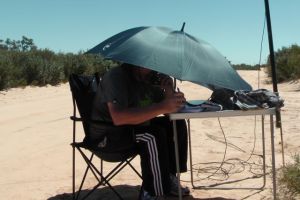 I had heard a few guys tell me that the south east fellas were around, so I tuned up to 7.110, where I spoke with Col VK5HCF/p, Tom VK5EE/p, and Greg VK5ZGY/p, who were all portable in the Lower Glenelg Conservation Park.  They had gained access to the park via boat, and were using 5 watts from an IC-703 and a linked dipole.  A great effort fellas.

My last 2 contacts of the day were with Stu VK5STU/p, and Nigel VK5NIG/p.  Stu and Nigel were portable at One Tree Hill trying out their new Yaesu FT-817nd’s (which they had bought from the AHARS Buy & Sell, a few weeks earlier) and experimenting with portable antennas (linked dipole & 40m inv fee dipole).

Time was getting away, & I had pushed my luck with Marija sitting in the car watching DVD’s, so it was time to pack up.  I had a total of 37 QSO’s in the log.

Just wanted to say thank you to Tony VK3VTH for organising the KRMNPA weekend.  It was a lot of fun, and we will definitely be participating again next year.

I have posted a video on You Tube of this activation…..