My first activation for Thursday 5th February 2015, was Brownhill Range, VK5/ SE-004, which is located about 27 km by road south east of Jamestown, and about 220 km north of Adelaide.

I had planned on activating The Bluff, VK5/ NE-065, but the hike to New Campbell the day before, had really taken it out of me.  So I called the land owner for Brownhill Range, first thing on Thursday morning, and got permission from him to access the summit (owner details can be found on the SOATA database).

I made an early start from Crystal Brook, and headed west along the Goyder Highway through Narridy.  I then took the Gulnare-Spalding Road, until I reached RM Williams Way, where I turned left and headed north towards Jamestown.  I then travelled out to Bellalie East and from there to Seven Trees Road.

I stopped off at the John Ainsworth Horrocks monument just outside of Gulnare.  Horrocks was a pastoralist and explorer, who passed through the district in August 1846 on his expedition to the north west of Mount Arden.  I then travelled up into the BrownHill Range.  It was a slow drive at times, as there were numerous Western Grey kangaroos on the roads.

As I got higher up into the Brownhill Range, the views back to the west were excellent.  You were able to see clearly back to Jamestown and the Bundaleer Forest Reserve, and New Campbell Hill where I had activated the day before.  And there was no shortage of kangaroos in this area either.  It was slow going.

Brownhill Range is 755 metres above sea level and is worth 4 SOTA points.  It is located amongst the Brown Hill (Hallett 1) windfarm.

Access to the summit is off Seven Trees Road.  Just down from the power plant is a set of double gates with various signsl on the gates including ‘Unauthorised access.  Trespassers will be prosecuted‘.  Please do NOT enter the property unless you have been given permission to do so.

I travelled up the dirt road, through a number of gates, until I reached the trig point at Brownhill Range.  The trig point consists of three blue painted metal poles, about 1.5 metres in height.  I parked the car down the dirt road, and walked up the road for a short distance and then up the ridgeline to the summit.

For this activation I ran the Yaesu FT-817nd and 5 watts output.  The antenna was the SOTA Beams 40m/20m linked dipole, which I supported on the 7 metre telescopic squid pole.  I secured the squid pole to one of the trig point poles, with the assistance of some octopus straps.

It was a beautiful sunny day, but it was incredibly windy on the summit.  There is a large outcrop of rocks at the summit, and I sheltered behind a large moss rock out of the northerly winds.

I was on air by 2250 UTC (9.20 a.m. SA local time).  My first contact was with Tom VK5EE in Mount Gambier, followed by Adrian VK5FANA on the Yorke Peninsula who was running QRP 5 watts (5/8 sent and 5/9 received).  My next caller was Nev VK5WG at Crystal Brook, and my fourth and qualifying contact was with Peter VK3FPSR.  I worked a total of 12 stations on 40m in VK3, VK5 & VK7.  Prior to heading over to 20m I was called by a station who was very very weak, and who I was just unable to pull out of the noise.  The wind turbines were generating an S1 noise on the band, and this combined with the wind, made it very difficult to copy.  Fred Vk3DAC, who was my last contact, informed me that it was Peter Vk3PF/7 who was trying to get through to me.

I told Fred that I would QSY to 20m and try Peter on 14.310.  I quickly lowered the squid pole and removed the links and headed for 14.310.  I asked if the frequency was in use and an American voice replied, ‘yes the frequency is in use, thankyou’.  I listened a little longer and found that it was some USA stations in QSO, but I could not hear the other station.  I was amazed that at this time of the day, that my 5 watt signal was being heard in the United States.

I then found that 14.305 was clear and I started calling CQ.  My CQ call was answered by Peter VK3PF/7.  He had found me.  Peter’s signal was not all that strong, but he was very readable (5/1 both ways).  Peter was on SOTA peak, East Tower, VK7/ NE-009, in the Ben Lomond National Park.  My next contact was with David VK2WTY.  I called CQ a number of times after this, with no response.  So I decided to head back to 40m to pick up some more chasers before the UTC rollover.  It was now 2327 UTC.

My first contact after returning to 40m was Greg Vk5LG in the Adelaide Hills, followed by Alan VK5ZLT.  I was then called by Tom VK5EE who was mobile at the Blue Lake at Mount Gambier, and then Tony VK3CAT who was mobile at the Sandringham Yacht Club.  My final caller before the UTC rollover was John VK5FMJC at Crystal Brook.

I then took the opportunity of stretching my legs.  I came back on air just after the UTC rollover, and asked for any mobile and portable stations first.   This call was answered by Tony VK3CAT and then Tom VK5EE.  I then asked for any QRP stations and this was answered by Nev VK5WG running 5 watts from his little X1M transceiver, followed by Ian VK5IS also running 5 watts and then Adrian VK5FANA again running 5 watts.  I went on to work John VK5FMJC and Craig VK5LI who was mobile on the South Eastern Freeway neat Mount Barker.

I decided to give 20m one last go after the UTC rollover.  So down came the squid pole again, and the links on the dipole were removed.  I called CQ on 14.310 and this was answered by Peter VK4JD and then Andrew VK2MWP running QRP 2 watts.  I put out a few more CQ calls but there were no takers.

So after 90 minutes on the summit, I had a total of 28 contacts in the log. 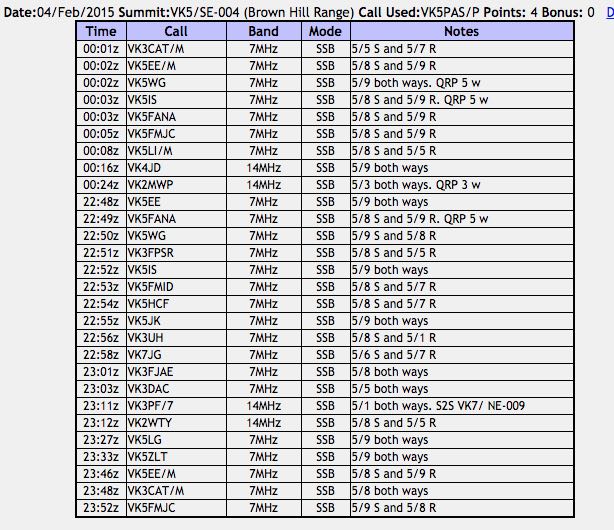