On Friday 17th April, my wife Marija took an early minute from work and I took a PDO from work, as we intended to travel up to Barmera in the Riverland region of South Australia, where had booked in to the Barmera Lake Resort for 2 nights.  Why were we heading up there?  Well, the Riverland Radio Club had organised a get together at the historic Overland Corner Hotel on Saturday 18th.

We left home at about 2.30 p.m. and travelled east to Murray Bridge and then north through the little towns of Cambrai and Sedan on Ridley Road.  We continued north on the Blamchetown Road until we reached the Sturt Highway.  This is the busy highway which links the Riverland region of South Australia with Adelaide.

The weather was not looking good.  It was pouring with rain as we left the Adelaide Hills, and the rain continued, although much lighter as we headed into the more desolate areas of the Murray Mallee.

We took a short stop here at a locality called Annadale, to have a look at the old site of the hotel at Annadale, which operated between 1876-1956.  There is nothing left now, but I could only imagine the number of beers that were drunk in that pub over the years on this busy stretch of road. 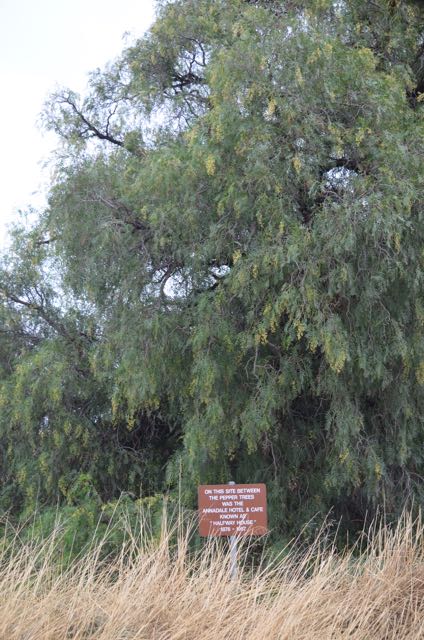 We then took a short stop a bit further up the road to view a monument relating to Goyders Line.  Monuments to Goyders Line can be found throughout South Australia.  In 1865, Surveyor General, George Woodcrof Goyder marked on the map of South Australia, a line delineating drought affected country.  The line which passes through the area on the Sturt Highway became an important factor in settlement in the State, being regarded as an indicatio of the limits of lands considered ‘safe’ for agricultural development.

We continued east on the Sturt Highway and stopped at the Brookfield Conservation Park for what was to be a quick activation.

Above:- Map showing the location of Brookfield CP.  Map courtesy of mapcarta.com

Brookfield Conservation Park is a large park and consists of 5,534 hectares.  It is located about 130 km north east of Adelaide.  The park was a gift to South Australia from the Chicago Zoological Society to conserve the Southern Hairy-nosed Wombat, which is the South Australian fauna emblem.  The park is also home to Fat-tailed Dunnarts, Western Grey kangaroos, echidnas, emus, and Red Kangaroos.  There is prolific bird life in the park including the rare Bush Stone-curlew, the nationally vulnerable Malleefowl, Ground Cuckoo-shrikes and Australian Owlet-nightjars.  Another striking bird that is found in the park is the White-winged Fairy-Wren, which is an amazing blue in colour.  The park also contains a large variety of reptiles.  The park itself is gently undulating limestone country. 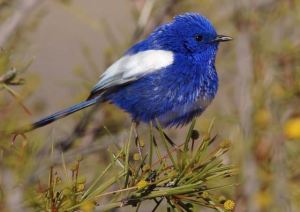 Above: The very colourful White-winged Fairy-Wren.  Image courtesy of http://www.conservationvolunteers.com.au

The park was originally a sheep station known as Glen Leslie Station.  But in 1971 the property was purchased by the Chicago Zoological Society for conservation of the Southern Hairy-nosed Wombat as mentioned above.  The park was originally named the Brookfield Zoo Wombat Reserve, and it was gifted to the Government of South Australia in 1977.  The park was proclaimed as the Brookfield Conservation Park, two years later, in 1978.

The park is now managed by Conservation Volunteers Australia (CVA) who undertake a range of volunteer activities both in the park and in the surrounding area.  The CVA have a focus on the research of threatened species.

Access to the park can be made by conventional vehicle, however some areas are restricted due to research on the Southern Hairy-nosed Wombat.  As Marija and I had a time limit, and the fact that the weather was lousy, we pulled in to a rest stop area and parked the car there.  I then jumped over the wire fence and set up the fold up chair and table, using one of the fence posts as an anchor point for my 7 metre telescopic squid pole.

This was also the noisiest activation I have ever undertaken.  We were only a short distance from the busy Sturt Highway so we had to endure the constant noise of the Highway traffic, including the big B double trucks. For those overseas that might be reading this, a B-double is made up of a prime mover which pulls two semi trailers, which are linked by a fifth wheel and can be up to 26 metres long.

I headed up to 7.144 and called CQ.  I was asked during this activation and a few times later in the weekend, as to why I was operating on 7.144

My first contact was with Adrian VK5FANA at Arthurton on the Yorke Peninsula, following by Graham VK5GW, Mick VK3PMG at Stawell in western Victoria, and then Ivan VK5HS at nearby Renmark.   About ten minutes into operating, I started experiencing some QRM from 7.146.  I tuned up there to hear that it was a net, and it was very clear that they were not going to move.  So I decided not to push the issue and took the opportunity of QSYing to 20m.  I am sorry to those that were still calling, but the QRM was just too bad and I was running low on time.  I had 18 contacts in the log from VK1, VK2, VK3, VK4, & VK5.

I called CQ on 14.311 and this was pretty much immediately answered by Dick VK7LDK, followed by Albert S58AL.  A mini pile up ensued with a number of callers from Europe, the UK, the Caribbean, and North America.  I even managed to work my very good mate Marnix OP7M in northern Belgium (5/9 sent and 5/8 received).

So, after a little longer than expected in the park, I had a total of 63 contacts in the log, including 42 DX stations from Slovenia, Puerto Rico, Italy, Belgium, Spain, France, England, Slovak Republic, Germany, Romania, Ireland, Ukraine, Hungary, and Alaska.

I know that there was still a huge number of stations calling when I went QRT.  But I am terribly sorry, as it was starting to drizzle with rain again, and it was getting dark.  We were also running very late to get to our destination at Barmera.  So I again apologise to those that were calling and didn’t manage to get Brookfield Conservation Park in the log.

Department of Environment and Natural Resources, Parks of the Riverland.