Most of Saturday (2nd May 2015) I spent around the home of Ivan VK5HS at Renmark, having my new Codan 9350 antenna installed on my Toyota Hi Lux.  During the morning Peter VK5FLEX called in, as did John VK5FANG.  It was a long day.  In fact we didn’t finish until late in the afternoon, and after a few beers I headed back to my motel room.

But there wasn’t a lot on the television, so I decided to head out to activate the Pike River Conservation Park, which was to be another new unique park for me as an activator.  The park is just a short drive out of Renmark along the Sturt Highway towards the Victorian/South Australian border.

To get to the park, you need to cross the historic Paringa lifting bridge which I took the opportunity of stopping here for some photographs.  The Paringa Bridge, which was constructed in 1927, is one of only two opening bridges in South Australia.  The other is at Port Adelaide.  The Paringa Bridge is technically a ‘lift span’ bridge as it has a section that lifts up to allow large vessels through.

The Pike River CP is about 296 hectares in size and consists of a major floodplain and a branch system of the River Murray.  The park has a number of species of national significance including the Southern Bell Frog, Murray Cod, and the Regent Parrot.  It also contained an additional 18 species with State Conservation significance. 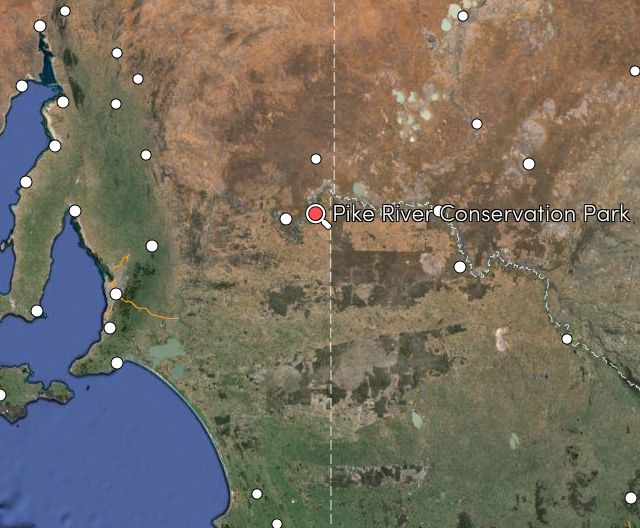 Again, this park is not at all signposted.  So you will need to rely upon your GPS.  There is an open and unlocked gate on the western side of the Sturt Highway which takes you into the park.  The track is okay, but in 2WD, you will only be able to reach a certain point.  I drove all the way down to the water’s edge and set up on the edge of the track.

As it was quite late  (4.45 p.m.) I headed straight to 20m.  For this activation I ran the Yaesu Ft-857d, 70 watts and the 40m/20m linked dipole supported on the 7 metre telescopic squid pole.  I called CQ only once, on 14.310, and to my surprise, my CQ call was immediately answered by ON6PV in Belgium.  And I was even more surprised when my second caller was Danny OT6V who was portable in a park in Belgium, Rodebos en Laanvallei, ONFF-391 (5/3 sent and 5/5 received).  Here is a link to Danny’s page about that activation….. 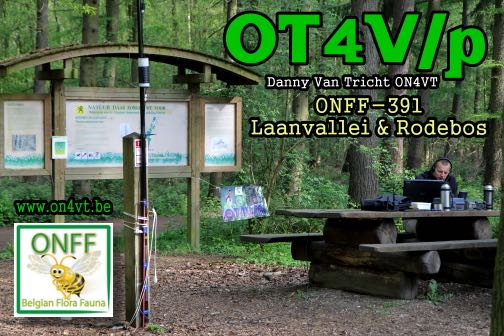 I was then called by Rod VK4NUM, followed by Ray VK4NH portable near Bourketown, and then Aaron AL4Y in Alaska.  Aaron was a very nice 5/8 signal and he gave me a 5/6 signal report.  Aaron was also kind enough to spot me on the DX cluster and this resulted in a large pile up.  In fact I worked a total of 60 stations in Belgium, VK4, Alaska, Italy, VK6, Denmark, Hungary, Germany, France, Switzerland, Slovenia, Lithuania, Sweden, Azores Islands, Russia, Slovak Republic, Spain, Estonia, Portugal, Canary Islands, Ireland, Netherlands, USA, and England.  And again, I spoke to my good friend Marnix, OP7M in Belgium.

Thanks to everyone that spotted me on the DX cluster.

I then moved over to 40m.  It was now totally dark and the local time was 6.00 p.m.  I called CQ on 7.110 and this was answered by Adam VK2YK in Newcastle, followed by John VK5NJ in Mount Gambier, and then Rex VK3OF.

I also managed a park to park contact with newly licenced amateur, Brendon VK5FFCC who was operating portable from the Morialta Conservation Park.  Brendon had a nice sounding station with his Elecraft KX3, 10 watts and end fed antenna.  Not a bad effort at all Brendon.  Licenced for one week, and already out in a park, and sounding like a pro.  Congratulations.  Below is a quick video of what Brendon sounded like to me……

I also worked Ken ZL4KD in new Zealand, who has now become a familiar caller and is a member of the VK5 Parks Yahoo group.

There was an annoying noise on 7.110 though.  I am not sure what it was.  I’ve attached a video below, so if anyone knows what the noise is, I would be pleased to hear from you…..

When things slowed down a little I had a tune around the band and heard NP4A calling CQ on 7.129.  I patiently waited my turn and gave Pedro a call and got through on the first go.  I have worked Pedro a few times before whilst I’ve been out in a park, and he always puts a great signal into Australia.

This was a very successful activation, with a total of 118 contacts in the log, including some nice DX contacts.