On Friday night (1st May 2015) after checking in to my motel I drove east out of Renmark along the Sturt Highway and headed into the Cooltong Conservation Park, via Santos Road.  This was to be another unique park for me as an activator for both the VK5 National & Conservation Parks Award and the World Wide Flora Fauna (WWFF) program.

Cooltong Conservation Park is situated about 250 km north east of Adelaide, and is located between Renmark and Berri.  Cooltong is a large park.  It is 3,681 hectares in size and was dedicated to preserve quality males vegetation and habitat for the mallee bird species that frequent the area, in particular the Malleefowl.  The park is a typical mallee park, with undulating dunes and shales.  The park is accessible to conventional vehicles, however some sections of the park are only accessible by 4WD. 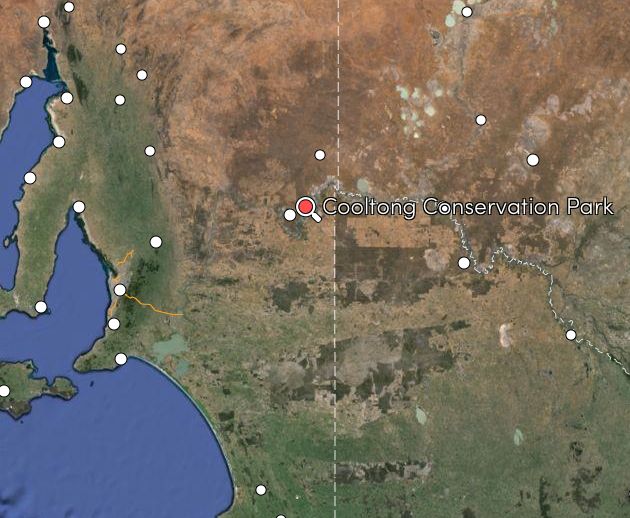 Above:- Map showing the location of Cooltong CP.  Image courtesy of mapcarta.com

I drove a few km into the park and found a little track off to the east and in turn a nice clearing in the scrub.  It was an ideal spot to set up.  It was slow going into the park as it was fully dark (6.30 p.m.) and the local wildlife was out in force, including the kangaroos.

Above:- My operating spot.  Image courtesy of mapcarta.com

The entire 40m band above 7.135 was decimated by the Over the Horizon Radar (OTHR).  This made it totally impossible to operate in that portion of the band.  The OTHR radar was still audible on 7.135, but I couldn’t go any lower on the band, as the 7.130 DX Net would kick off at 0930 UTC, and everything below 7.130 was taken up by stations from South East Asia.

Below is a video of the radar…..

So I called CQ on 7.135 and it wasn’t long, before the hungry park hunters started to respond.  First up was Theo VK3AP with a nice 5/9 plus signal, followed by three regular park hunters: Andrew VK1NAM, Dave VK3VCE and John VK5BJE.  Local Renmark resident and mate of mine, Ivan VK5HS then called in.  Interestingly Ivan said he could not hear the radar and thought the noise I was hearing might be something generated out of my vehicle.  I assured him that it was definitely the OTHR.

Some of the usual QRP suspects called in for this activation.  They were Adrian VK5FANA on 5 watts from the Yorke Peninsula (4/6 sent and 5/7 received), and also Peter VK3PF running 5 watts (5/9 both ways).  I was also called by Adrian VK4FBMW running 5 watts.  Unfortunately the JA QRM was also quite heavy on the frequency, but still, I was able to copy Adrian well with his QRP signal (4/7 sent and 5/8 received).

I also worked some stations outside of VK.  They were John Zl2BH in Blenheim in New Zealand, and Ken ZL4KD in Christchurch.  Ken informed me that he had seen me spotted on parksnpeaks and had decided to give me a call, and that I was his first ever VK5 Conservation Park contact.  I was very pleased to have Ken in the log.

It was a beautiful mild evening in the park.  The moon was out and due to the cloud cover, it had a very distinctive ring around it.  There were quite a few bumps and crashes in the scrub whilst I was operating and I had the occasional fleeting glimpse of some of the local kangaroos.

Within the park I did see some signs that surveillance cameras were in operation.  I thought this may have been due to bird trapping, but as I later found out, it is due to the dumping of rubbish.  It never ceases to amaze me how poorly some people treat our environment.

I worked 38 stations on 7.135 and then at 8.10 p.m. I decided to head down to the 7.130 DX Net which is held on 7.130 every Monday, Wednesday and Friday.  I worked a total of 6 stations on the net, bringing me to my required 44 contacts for the global WWFF program.  I was very pleased to work the special New Zealand ANZAC call, ZL100ANZAC on the net, and also Brian ZL2ASH in Wellington.

Department of Environment and Heritage, 2011. Parks of the Riverland.

On Friday afternoon (1st May 2015), I packed the Toyota Hi Lux and headed off towards Renmark in the Riverland region of South Australia.  My reason for heading there was that Ivan VK5HS was going to instal a Codan self tuning 9350 antenna in the vehicle for me.  And I was also planning on a park activation with my old mate Larry VK5LY who has not been travelling well of late.

My first park activation along the way was the Bakara Conservation Park (CP), which was a unique park for me to add to my activator list.

Bakara CP is located about 32 km east of Swan Reach.  The park is 2,029 hectares (5,010 acres) in size and was established back in 1986 to conserve the Malleefowl habitat.  The park area was doubled in size in 2009 by the addition of the adjacent section of land to the north of the original park.

Above:- The location of Bakara CP.  Map courtesy of mapcarta.com

After leaving home, I travelled east along the South Eastern Freeway to Murray Bridge and then headed north east long the Bowhill Road.  I then drove north along Hunter Road (Swan Reach – Walker Flat Road), which runs alongside the mighty Murray River.  I stopped at Len Kroehn’s Lookout near the little town of Nildottie, to stretch my legs and take some photographs of the Murray and some of its spectacular cliffs.

I continued on and I accessed the park via Start Road, which is a well graded dirt road which runs off the Stott Highway (Swan Reach-Loxton Road).  Don’t bother looking for any signage off the Highway.  There isn’t any.  A common theme with many South Australian Conservation Parks.  You will need to rely on your GPS.  And dont blink, because you may also miss the park signs hidden amongst the scrub.

I travelled a few km down Start Road and I found a little track leading off Start Road and then a clearing amongst the mallee scrub, and that was where I set up. 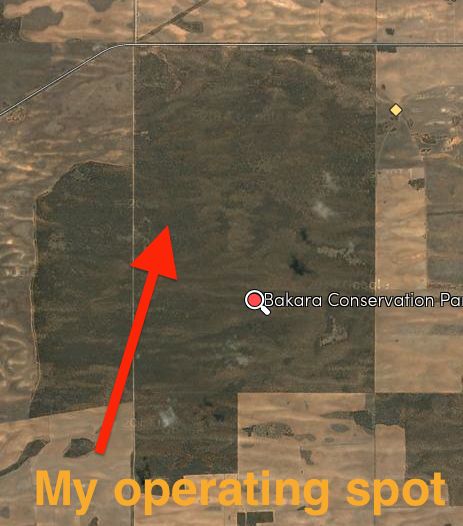 Above:- My operating spot.  Image courtesy of mapcarta.com

As is the case with the majority of my park activations, I ran the Yaesu FT-857d, 40 watts and the 40m/20m linked dipole supported on the 7 metre telescopic squid pole.  There were no problems here with driving in the squid pole holder as the ground was very sandy and quite soft.

I called CQ on 7.095 and my first taker was Greg VK5GJ running about 4 watts from Meadows in the Adelaide Hills.  As per normal, Greg had a lovely signal (5/8 sent and 5/9 received).  This was followed by a call from Brad Vk2HAV who was very light to me, but due to the non existant man made noise floor in the park, Brad was very workable.  This was followed by a call from another New South Welshman, Ian VK2GDI who had a strong 5/8 signal.  My next contact was with Jim VK4OK who was quite weak (5/3) but again very readable in the park.  Jim gave me a 5/1 signal report.  So that was an interesting start to the activation.  A QRP VK5, followed by two VK2’s and then a VK4.

My next contact was with Tony VK5ZAI who who on holidays down in Tasmania and was about 50 km north of Launceston.  Tony had a very nice 5/7 signal and he reciprocated with a 5/8 for me.  Some of the more regular park hunters had obviously found me and then started to call.  This included some of the regular QRP callers.  Adrian VK5FANA on the Yorke Peninsula with his 5 watts had a nice 5/9 signal.  And Paul VK3DBP also on 5 watts had a strong 5/8 signal.  Mobile callers included Tom VK5EE in the South East (5/9 both ways), Peter VK3PF (5/8 sent and 5/7 received), Ivan VK5HS mobile at nearby Blanchetown, Perrin VK3XPT (5/8 sent and 5/9 received), and John VK3FCAN mobile near Traralgon (5/5 sent and 5/9 received).

My first contact on 20m after calling CQ a few times on 14.311 was with Sergey RA3PCI in Russia.  Sergey spotted me on the DX cluster and this resulted in quite a large pile up with lots of callers from Europe.  But as the number of callers started to increase, I did worry that this activation might cause some confusion with some of the European park hunters.  Bakara CP does not currently qualify for the World Wide Flora Fauna (WWFF) program and so therefore does not have a VKFF number.  But most of the Europeans that I worked, appeared to understand that this was not a WWFF activation and that the park qualified for the VK5 Parks Award only.

I went on to work a total of 61 stations on 20m.  Most of those contacts were long path into Europe ( I worked Russia, Italy, Belgium, Ukraine, Slovenia, Poland, England, Sweden, Switzerland, Spain, Croatia, France, Germany, Estonia, Greece, Portugal, and the Netherlands).  However there were a few VK’s scattered in there as well, including Perrin VK3XPT mobile, Gerard VK2IO, Andrew VK1NAM, and Craig VK6VCK mobile.  Also outside of Europe was Warren ZL2JML in New Zealand.  And again I managed to make a QSO with my very good friend, Marnix OP7M in Belgium.

Thanks to everyone that took the time to spot me on the DX cluster.  It certainly helped to drag in the park hunters.

During the pile up into Europe, Craig VK6VCK who was mobile in Western Australia, gave me a call and asked if I had upgraded my call.  I replied that I hadn’t and was then asked why I was outside of the Standard call portion of 20m.  This really threw me.  I was on 14.311 and well inside the 14.350 limit.  But Craig was insistent that Standard calls could not operate above 14.300.  I knew this to be incorrect, but a few calls on, I started to doubt myself a little.  But my doubts only lasted a short time as I knew that I could operate up to 14.350.  It was one of those strange tricks that you mind plays on itself.

It was starting to get a little late.  The local time was nearly 4.30 p.m. and I still had a way to travel to get to my destination of Renmark.  So I packed up the gear, feeling a little disapointed as the conditions on 20m into Europe were very good.

I had a total of 91 contacts in the log from this new unique park for me as an activator.  I was very happy.