My second park for Tuesday (9th June 2015) was to be another unique VK5 park for me, Calectasia Conservation Park, which is located about 27km west of Penola. 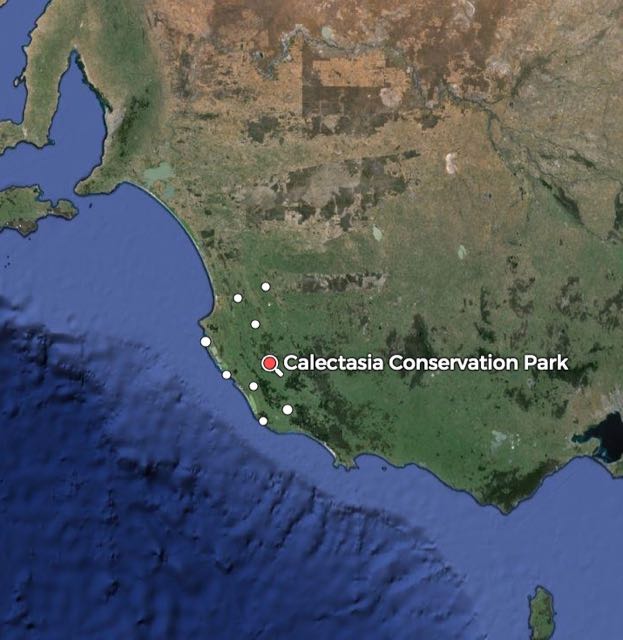 The park covers an area of just 14 hectares.  It is quite a small park.  The northern and southern sections of the park form part of a stranded dune system and have sandy soils.  Separating these two areas is a low lying area which comprises about 70% of the park.  This area is subject to inundation during the wet months of the year.  The park consists of brown stringybark, austral grass tree and a large amount of banksias.  The park was named after the endangered blue tinsel lilly Calectasia cyanea which can be found in the park.  Calectasia was totally devastated during the Ah Wednesday bushfires of 1983.

Again, I encountered a locked gat at this park, so I jumped the fence with my gear and set up in a little clearing just off the Claywells Road. 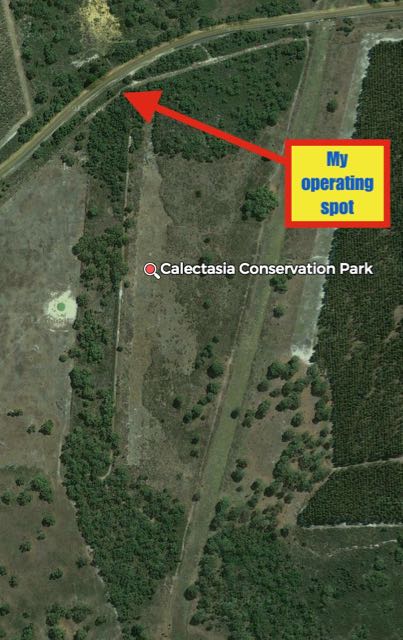 Despite the fact that there were power lines close bay, the 40m band was very very quiet.  I called CQ on 7.095 and this was answered by Amanda VK3FQSO, following by Adrian VK5FANA, Paul VK5FUZZ, and Jeff VK5HK.  A number of the usual suspects followed including Mike VK6MB and Michael VK6MMB who were operating from a National Park in Western Australia.  Although they were very weak (5/1) they were perfectly readable.  I worked a total of 23 stations on 40m from VK3, VK5, and VK6.

I then tried my luck on 20m and after calling CQ on 14.310 a few times, I was greeted by Gerard VK2JNG/p.  This was followed by a contact with Gerard VK2IO mobile who was just about to activate a SOTA summit.  Gerard advised that he would be up on air at the summit in about 15 minutes.  So I decided to have a quick walk around the park and also a tune around the 20m band.  Whilst waiting for Gerard I spoke with Al EV1R in Belarus and Nelu YO2LEA in Romania.  I then returned to 14.310 and by pure luck I heard Gerard VK2IO calling me.  So I gave Gerard a 5/7 and he reciprocated with a 5/7 from SOTA peak, VK2/ NT-019.

My last contact in the park was another DX contact.  This time with Genna, UA7D in Russia (5/9 sent and 5/6-7 received).  Not bad with my little dipole and 40 watts.