Our first activation for the trip to the north of South Australia, was the Clinton Conservation Park, VKFF-813, which is located about 100 km north of Adelaide.

I have activated Clinton Conservation Park previously…..back in February 2015, and June 2013.  However, the park was recently added to the World Wide Flora Fauna (WWFF) program, so I was seeking 44 contacts to qualify the park.

The Clinton Conservation Park was established in 1972, and is 1,923 hectares in size.  It is a boomerang shaped park, which is situated at the northern extremity of Gulf St Vincent.  It stretches around the top of the Gulf from just north of Port Wakefield, around to the little town of Port Clinton on the Yorke Peninsula.  The park comprises an expanse of mainly low-lying, coastal-fringe habitats, with mangroves and samphire communities, and extensive tracts of intertidal mudflats.  It is an important refuge as a fish nursery and a significant site for migratory wading birds.

Above:- Map showing the park boundaries.  Map courtesy of mapcarta.com

I set up in the same spot as my activation earlier in the year, which is at the end of a dirt track on the western side of the Yorke Highway.  The track continues on from a parking bay off the Highway.

This was a typical park activation for me….I ran the Yaesu FT-857d, 40 watts and the 40m/20m linked dipole supported on the 7 metre squid pole.  The weather was a little inclement.  It was quite chilly and there was the occasional shower.

Prior to calling CQ I tuned around the 40m band and found Julie VK3FOWL and Joe VK3YSP operating on 7.100 from SOTA peak, Mount Hickey, VK3/ VN-015.  Julie and Joe were my first contacts from Clinton and had terrific 5/9 signals coming into the Yorke Peninsula.  I then headed down to 7.095 where I started calling CQ.  Greg VK5GJ at Meadows in the Adelaide Hills was the first responder.  This was followed by Adrian VK5FANA running QRP 5 watts from Arthurton on the Yorke Peninsula, just 50km south of my operating location.  Not surprising that Adrian was a very strong 5/9.  My next caller was from another part of South Australia.  This time the South East, about 600 km away.  It was Alan VK5FAJS with a nice 5/9 signal.

My 10th caller was from the other end of Australia.  It was Rob VK4FFAB north west of Brisbane in Queensland.  Rob was not all that strong (5/3), but he was perfectly readable as there was no man made noise at all on the frequency.

And a number of mobile stations also called me.  They included Terry VK3UP mobile at Buninyong (5/9 both ways), Mark VK5QI mobile on his way to Aztronics to spend some money, Greg VK5ZGY mobile in the South East (5/8 both ways), Tony VK3AN/mobile 5 at Burra in the Mid North, Ron VK3VBI, and Theo VK5MTM.

It was also nice to get Barry VK5BW in the log, operating VK5BAR from the Adelaide Hills Amateur Radio Society (AHARS) shack at Blackwood.  Barry was using the club’s new Anan SDR transceiver.

During our activation, we had a car towing a trailer drive down towards us.  A gentleman hopped out and had a close look.  We soon realised that the pidgeon contained pidgeons.  After a short time the fella then hopped in his car and drove off into the nearby parking bay and released dozens of homing pidgeons.  The man then drove off.  Not sure where the pidgeons were headed to?

After working a total of 53 stations on 40m, I lowered the squid pole and removed the links in the dipole, so I could operate on 20m.  I headed up to 14.310 and started calling CQ and this was soon answered by Andrew VK2UH who had a lovely 5/9 signal.  This was followed by Cliff VK2NP, Peter VK3PRF and then Max VK6FN in Manjimup (5/9 sent and 5/7 received).  Chris VK4FR then gave me a shout from Townsville, running just 10 watts (5/6 sent and 5/7 received).  I went on to work a further 9 stations on 20m from VK1, VK2, VK5, VK6, VK7, and VK8.  Great representation from all across Australia, including Greg VK8GM in Alice Springs who was very strong.  I was also competing with a YV5 from Venezuela who was also on the frequency.

Unfortunately time and the weather were conspiring against me, and it was time for Marija and I to get back on the road and continue our journey north.  After an hour and twenty minutes in the park, I had a total of 67 contacts in the log.  I was happy man…I had qualified the park for WWFF.

Arrived back home last night from my trip away with Marija, John VK5BJE & Jenny, and David VK5KC & Joy.

Marija and I travelled nearly 2,500 km in 11 days.  We activated 4 Conservation Parks, 3 SOTA summits, and 3 National Parks.  And we also operated as VK100ANZAC at Farina in the Far North on Wednesday & Thursday.  Total of 666 QSO’s (scary hey, the devil’s number). 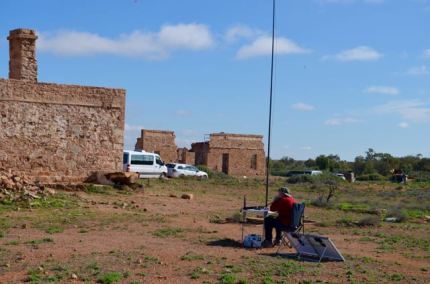 I also squeezed in a bit of operating from the Argadells property near Quorn, and in the mobile as well.

John and David are still currently away, and I am sure that John will post his results & info on his WordPress site when he returns.

Thanks to everyone that called, and thanks to those who took the time to spot us on parksnpeaks, the DX cluster, here on the group, etc.  For most of the time away we had no phone coverage.

Here are the parks and summits I activated and the total number of QSO’s from each.

He is some quick audio from the WIA Broadcast re our trip…..