We all enjoyed a good feed and a few more bottles of red on Friday evening at Merna Mora Station, where we stayed for 3 nights (Fri-Sun).  Merna Mora is part of a 230 sq mile sheep and cattle station located about 425 km north of Adelaide, and about 46 km north of Hawker.  About 2,500 sheep and 800 cattle are run on the property.  Merna Mora has facilities to accomodate up to 50 people.  For more information on Merna Mora, please visit their website at…..

Saturday morning, 20th June 2015, was a beautiful sunny morning.  After a cooked breakfast an enjoying a coffee in the sunshine watching the Miner birds and Honeyeaters in the flowering native plants out the front of our accomodation, we hit the road for the Flinders Ranges National Park, VKFF-176. 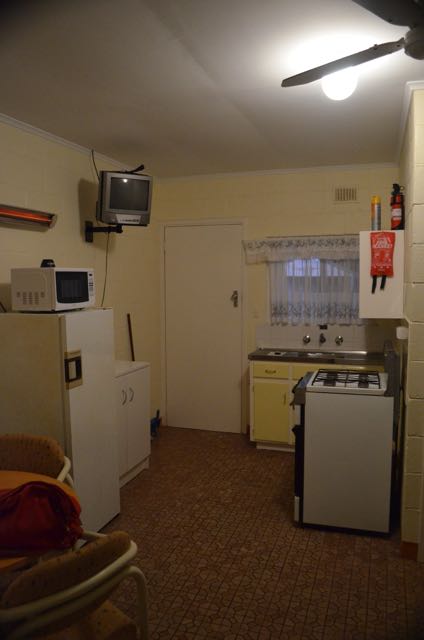 Inside of our unit at Merna Mora 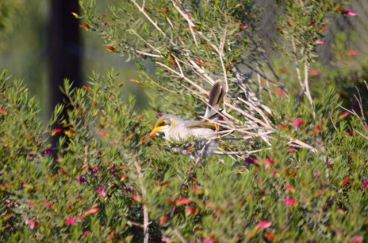 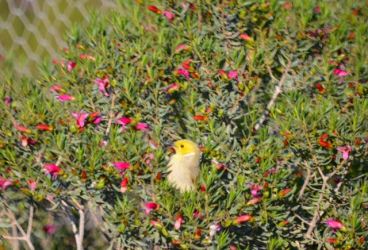 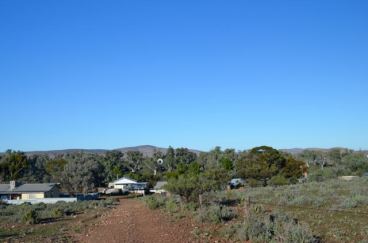 A view of Merna Mora

The Flinders Ranges National Park is situated about 450 km north of Adelaide and is located in the central Flinders Ranges.  The park is about 95,000 hectares and includes the Heysen Range, Brachina and Bunyeroo Gorges and the amazing Wilpena Pound.  The Adnyamathanha people (meaning hills or rock people) are the traditional custodians of the Flinders Ranges. 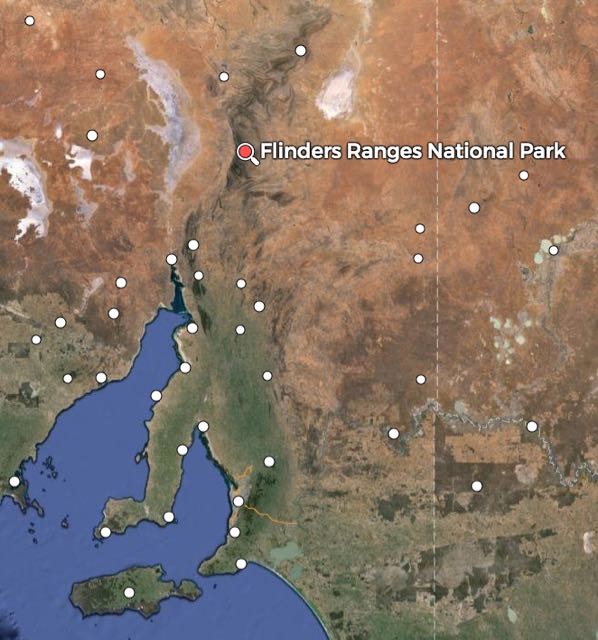 Above:- Map showing the location of the Flinders Ranges National Park.  Map courtesy of mapcarta.com

We drove north along The Outback Highway and turned right on the Brachina Gorge Road and headed east towards the park.  We briefly stopped at the interpretive signs and lookout, before venturing into the park through Brachina Gorge. Rocks exposed along the gorge are between 500 and 650 million years old and were deposited as sediments in an elongate depression known as the Adelaide Geosyncine.  This area was flooded by the sea for much of the 150 million year period, during which the sea level rose and fell many times.  Sediments were transported by rivers, and at times by glaciers, and deposited on the sea floor.  Rock strata along the gorge provide one of the most complete sedimentary records in the world for this time period.  It is truly and amazing and very spectacular drive through Brachina Gorge, with many interpretayive signs along the way. 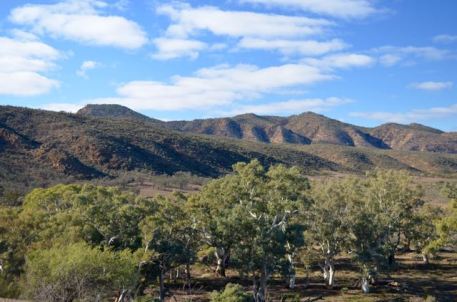 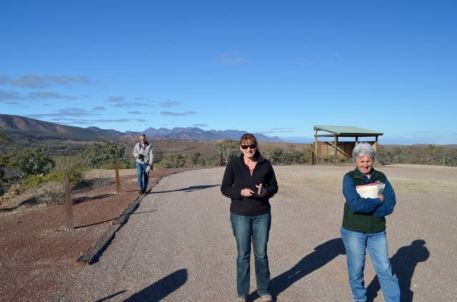 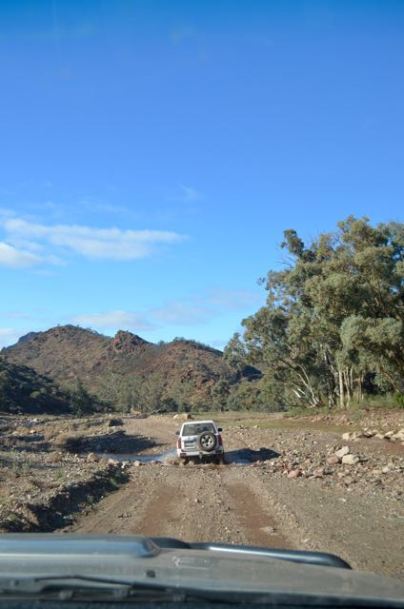 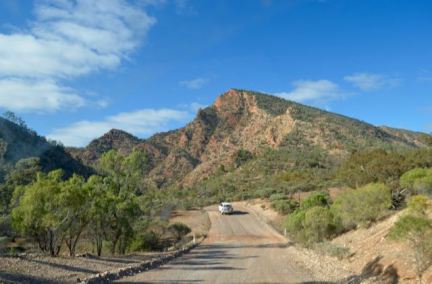 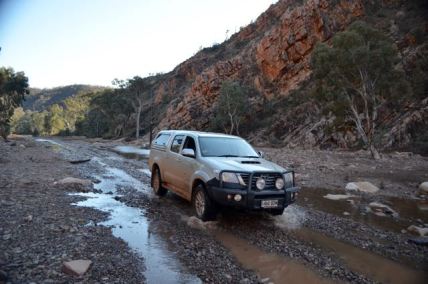 We were fortunate enough to encounter a handful of the rare Yellow Footed Rock Wallabies as we drove through the gorge.  Sadly this little wallaby was once killed in large numbers for its pelt.  They scale cliffs and climb rocks with superb agility and can leap sizable chasms.  It was a real treat to be able to see them up close. 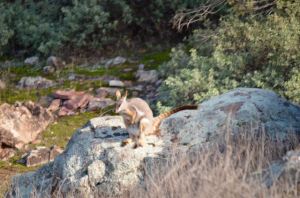 We continued on to the Aroona Valley, where we set up at the end of the Aroona Valley Road, at the Aroona Ruins.  The Arrona hut was built in 1925, as an outstation for Eddie Pumps.  It consisted of a four roomed dwelling with a stone fire place and a verandah running along three sides.  The house is a typical pug and pine construction.  Slabs of native pine from this area were cut and erected vertically side by side.  Chicken wire was nailed to the framework and mud or pug was flushed to fill the gaps.  The floor was rammed earth and the roof was corrugated galvanized iron sheets.  The famous Australian artists, Sir Hans Heysen stayed here in 1927 and started the first of many sketches and paintings of the Flinders Ranges. 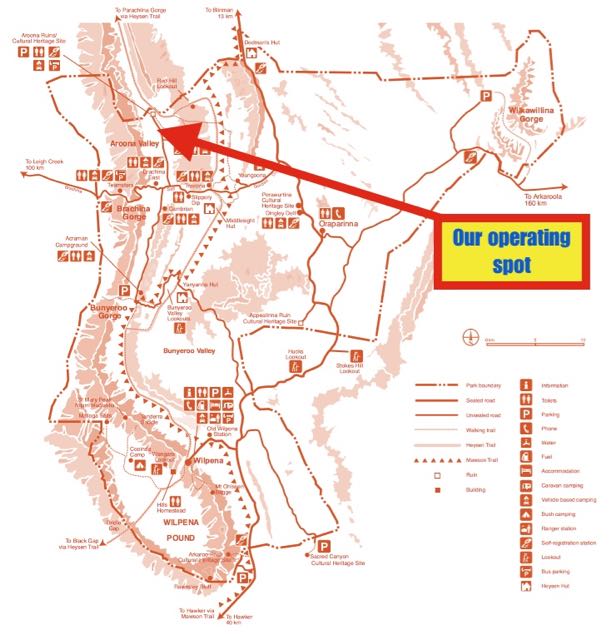 Above:- Map showing our operating spot in the park.  Map courtesy of DEWNR

John VK5BJE was keen to try his luck again on 30m and set up near the carpark.  I set up in close proximity, a little further up the hill and started off on 20m.  David VK5KC headed a bit further to the east and worked 40m.

My first contact on 20m was with Fred VK4FE who was operating from Mowbray National Park, VKFF-367 in Queensland.  Fred was calling CQ on 14.310 and was a good 5/7 signal.  I then headed down to 14.305 and called CQ and this was answered by Michael VK6MMB who was portable in Goongarrie National Park, VKFF-209.  Michael and his off side Mike VK6MB were half way through a marathon parks trip in Western Australia.  This was followed by a call from Gerard VK2IO who was mobile on his way to a SOTA summit in the Blue Mountains.  I was then called by Adam VK2YK with a strong 5/9 signal and then Mark VK4MON with a 5/8 signal, operating portable from his back yard.

I then moved up to 40m and called CQ on 7.095 and this was answered by Larry VK5LY in the Riverland with his typical strong 5/9 plus signal.  I went on to work a total of 34 stations on 40, including Fred VK4FE in Mowbray National Park and Dale VK5DC mobile near the Northern Territory/Queensland/South Australian border.

I then decided to give 15m a go, and managed to work Cliff VK2NP, Fred VK4FAAP and Ian VK1DI.  Prior to packing up, I worked Rob VK4AAC who was portable in the Vivonne Bay Conservation Park, VKFF-811, on Kangaroo Island.

After 90 minutes at Arrona Ruins, it was time to pack up and head off a bit further up the Brachina Gorge Road for a bite to eat.  I had a total of 43 contacts in the log.  We were planning on activating the Flinders Ranges National Park again, later in the afternoon, so I was assured of picking up 1 more QSO to qualify the park for the World Wide Flora Fauna (WWFF) program.