The Adelaide Hills Amateur Radio Society were fortunate to be allocated the special call sign of VI5ANZAC this weekend as part of the 2015 ANZAC Centennary.  But sadly there was a distinct lack of volunteers to get involved.  That combined with the AFL Grand Final and the Oceania DX Contest meant that I could not get out to activate VI5ANZAC until today.

So it was a bright and early start on a very warm morning, and off to the Belair National Park we headed.  By we, I mean my trusty wife Marija, and our daughter Olivia, 16, going on 25.  It was going to be a very hot day, with an expected maximum temperature of 36 deg C.  Thus, the early start, to beat the heat of the day.

Prior to leaving I had a quick look at the HAP chart for Adelaide.  I wish I hadn’t.  It left me shaking my head again.  Predictions were for poor propagation on the 40m band.

And why operate from the Belair National Park?  Well back in 1962, an avenue of 40 Californian Sequoias redwood trees were planted by staff of Belair National Park, as a memorial to Australian and American Allied Forces who served in World War Two, and in Korea.  Until recently the memorial had only been accessible via a remote fire track.  But back in October 2008, a new path was opened, allowing visitors to walk to the trees.

Belair National Park is situated about 13 km south east of Adelaide, and was the first National Park to be dedicated in South Australia.  In fact it was the second National Park in Australia, after Sydney’s Royal National Park.  The park was originally known as Belair Recreation Park and was established in 1891.  It is a large park, comprising 835 hectares (2,060 acres).

Above:- Map showing the location of the Belair NP.  Image courtesy of SA Map Viewer.

We arrived at the park at around 8.15 a.m. local time.  The gates had officially opened at 8.00 a.m. but there was nobody manning the payment booths at the park entry, and online payment was not an option at Belair, so we drove on into the park.  We headed along The Valley Road, for the Karka Picnic area.   We then drove down the appropriately named Cherry Plantation Road until we reached a locked gate and a carpark.

The drive through the park was very picturesque.  The park contains a mixture of native Australian plants and exotic plants.  Although it was quite early in the day, the park was alive with bushwalkers, cyclists, joggers, and families setting up picnic areas.

Prior to setting up, the three of us went for a walk along the ‘RSL Walk’ which starts at the locked gate on Cherry Plantation Road.

At the start of the walk you will find a stone cairn with a memorial plaque which acknowledges….

‘In 1992, through public subscription, aided by the National Park, Mr. F.H. Snow established here, a plantation of 700 flowering trees, in memory of the fallen of World War One.’

We continued on, along the path, and walked over the wooden bridge over the creek.  We followed the path for about 1 km through some very pretty country, until we reached a clearing.  The walk is quite easy, with the gradient being easy.

It was at this point that we had reached another stone cairn with a memorial plaque which reads….

‘In 1962, this avenue of Sequoias was planted by the staff of Belair National Park, as a memorial to Australian and American Allied Forces who served in World War Two, and in Kore.  The construction of the bridge and track to this site was a joint venture by Blackwood and District RSL, National Parks and Wildlife Staff, Rotary Club of Blackwood Inc, Employ SA Youth Conservation Corps, and National Parks Heritage Committee’.

It was here that we stood back and admired the magnificent avenue of Sequoias, which are redwood coniferous trees which can be found in California and Oregon in the United States of America.

After returning from the walk, Marija and Olivia helped me set up the station.  We positioned the fold up table and deck chair in a nice shady spot, as the sun already had a lot of bite behind it.  For this activation I ran the Yaesu FT-857d, 70 watts, and the 40m/20m linked dipole, supported on a 7 metre telescopic squid pole.  Because it was nice and sunny, out came the solar panels to charge up the 44 amp hour power pack.

I was ready to go by 9.15 a.m. (2245 UTC) and I started calling CQ on 7.144.  I called……and called, and called CQ.  Absolutely no takers.  It looked like the HAP chart predictions were spot on.  I tuned across the 40m band and could not hear a single signal.  Fortunately Marija and Olivia had headed off for a walk so they didn’t hear me cursing and swearing.

I returned back to 7.144 and called CQ again, and this was answered by Neil VK4HNS/p at Goondiwindi on the Queensland/New South Wales border.  Neil had a nice strong 5/8 signal and he gave me a 5/7.  So there was some hope, that I would get some contacts in the log.

Following on from Neil, I was called by Mick VK3PMG in Stawell in western Victoria, with a 5/8 signal, but lots of QSB.  I was a little surprised to hear Mick, as the predictions were that propagation would not be possible from Belair to Victoria on 40m.  Mick is normally 5/9 plus to me.  But not on this occasion.  And I normally get a good signal back, but for this activation, Mick gave me a 5/5 signal report.  Peter VK3RV then called in from Melbourne, and he too was 5/8, with lots of QSB.  This was followed by Peter’s wife, Jenny VK3WQ.

I then spoke with Ron VK2AJD at Richmond Hill near Lismore in New South Wales.  Although Ron was only 5/5 and I was 5/3, we were both in man made noise free areas, so we were able to copy each other perfectly.  This was followed by a call from Mark VK2UMA (5/5 sent and 5/3 received) from near the New South Wales/Queensland border.  I continued to call CQ on 40m but sadly there were no takers, so I lowered the squid pole and removed the links in the dipole and headed for 20m.  I was hoping that things may be a little better there. 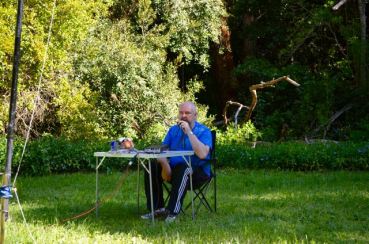 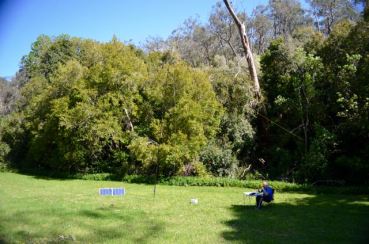 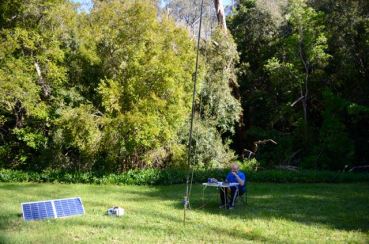 But I was to be very disappointed.  The 20m band was even worse.  I spent about 10 minutes on 14.310 on 20m calling CQ, but sadly I did not get a single taker.  And after tuning across the entire 20m band I did not hear a single signal coming in from anywhere.  So down came the squid pole again, back in went the links, and back up went the squid pole, and back to 40m I went.

I decided to try my luck a little lower in the 40m band, and called CQ on 7.090.  Almost immediately I was called by Mick VK3PMG, who almost knocked me off my chair.  This time Mick was 5/9 + and he gave me a 5/9 signal report from western Victoria.  It was as if someone had turned on a switch and the 40m band had come to life.

My next caller was also a huge surprise.  It was Bill VK5MBD at Red Hill in the Mid North of South Australia with a monster 5/9 plus signal.  Bill reciprocated with a 5/9 plus signal for me.  Next up was Brian VK3BBB who in recent times has become a regular park hunter. Brian had a nice 5/9 signal, but reported my signal being down a bit, with a 5/4 received.  I was then called by Adam VK2YK in Newcastle who had a 5/9 plus signal from Newcastle.  My signal was reaching Adam’s QTH well, with a 5/9 signal report received.  Adam had informed me that he had listened for me earlier on 7.144 and also on 20m, but he had not heard a peep out of me.  Amazing how things can change in the space of half an hour.

I then took a short break to stretch my legs and returned to 7.090 and called CQ again.  This time my CQ call was answered by Dieter VK3FFB in the eastern suburbs of Melbourne, who was struggling with a high noise floor (5/9 sent and 5/7 received).  The band had certainly taken a few steps back in just a 15 minute period.  Dieter’s signal was affected by very severe QSB.  This was followed by Peter VK2YPU in Sydney (5/9 sent and 5/5 received), and then Bill VK4ZD between Toowoomba and Brisbane in Queensland (5/7 sent and 5/6 received).

My next contact was a real struggle.  And I’m still not sure if I got the call right.  I logged VK7HBS, but I am not sure that is accurate.   This was a very difficult QSO and despite many repeats of the call sign, I think it may be incorrect.  This was followed by Colin VK2JCC portable in Pennant Hills, trying out his brand new linked dipole (5/5 both ways).

I was pleasantly surprised to receive a call from Andrew VK1NAM who was portable on SOTA peak Mount Stromlo, VK1/ AC-043 in the Australian Capital Territory(5/5 sent and 5/8 received).  I had received an earlier message from Andrew advising that he was going to head out to activate, so it was nice to get Andrew in the log,

I was then delighted to speak with Bruce, VK2EJU, between Newcastle and Port Macquarie in New South Wales.  Bruce told me that he was X Royal Australian Navy, so it was an extra pleasure to get Bruce in the log with the special VI5ANZAC call.  Bruce was only a 5/3, but very readable in the park.  Sadly, the band dropped out half way through out QSO.

I left the frequency with Tony, and we packed up the gear as the morning was getting on and it was certainly heating up.

After packing up we headed down The Valley Road and found a picnic area where we enjoyed lunch.

After lunch, we took a short stroll to have a look at the Commissioner’s Shack, which was constructed in 1926, for the park blacksmith.  A short distance away is an interpretive sign for Foots Cottage, which no longer stands.  However, there are some signs of previous habitation in the area, including an old Magnolia tree.  We also briefly stopped to have a look at Old Government House, constructed in the 1850’s. 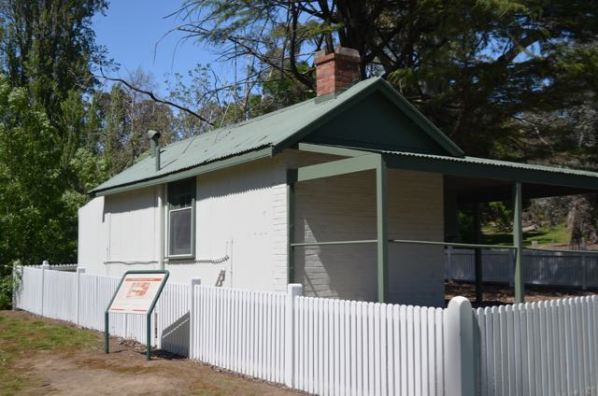 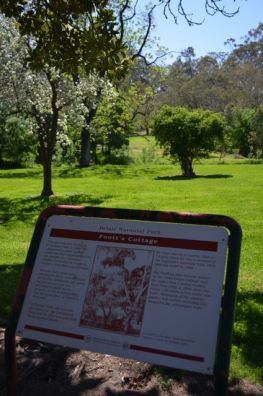 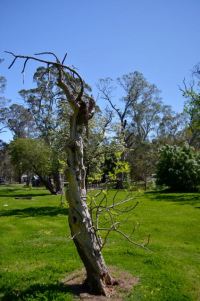 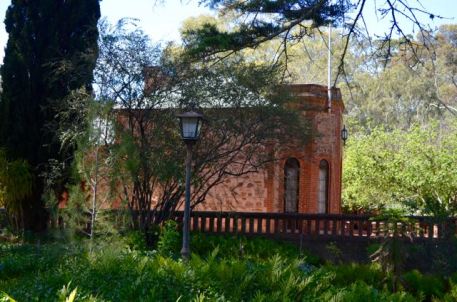 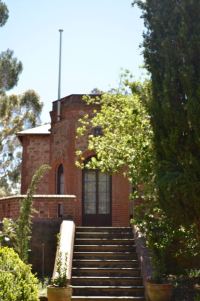 The park was alive with birdlife including Rainbow lorikeets, Eastern Rosellas, Magpies, Superb Blue wrens, and honey eaters.  There was no sign though of any kangaroos.  Way too hot for them at this time of the day.  Many of the native plants were also out in flower.

As it was such a hot day, we headed for the kiosk in the park and had some gelati.  We then proceeded down to Playford Lake at the western end of the park.

On the way out of the park, we saw a couple looking high up into a tree with their binoculars.  We stopped, suspecting they were looking at a koala.  Sure enough, there was a female koala ‘doe’ perched in a gum tree, grasping hold of her young baby ‘joey’. 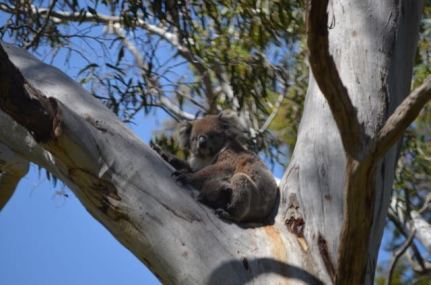 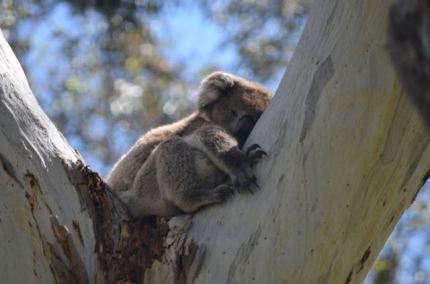 It was back home to the cool of the air conditioning for the three of us.  It was a little disappointing with the band conditions, but netherless, still a very enjoyable day out.  I had a total of 28 stations in the log, which is a lot more than I expected after my experiences in the first 5 minutes of the activation.