After leaving Mount Leura, we travelled north out of Campberdown along the Campberdown-Lismore Road, passing through the little areas of Chocolyn, Kariah, and Larralea, Our destination was Mount Elephant, VK3/ VS-047, which lies at the foot of Derrinallum.  This was to be our second SOTA summit of the day.

Mount Elephant is a perfect breached scoria cone which last erupted appproximately 5,000 to 20,000 years ago.  As such it is amongst the youngest volcanoes in Australia.  The land on which the summit is located had been privately owned by the Eldridge family since European settlements.  It had been heavily grazed, and ravaged by bushfires in 1944 and 1977.  The summit was known as Swagman’s Lighthouse, a landmark for pioneers to navigate their way throughout western Victoria.  In December 2000, the Eldridge family offered the Mount for sale by auction.  The Derrinallum and Lismore communities rallied and the Mount was purchased by the community. 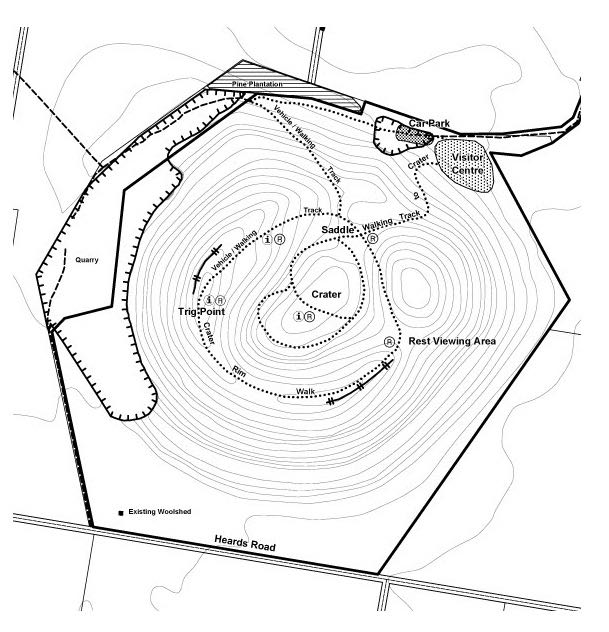 Above:- Contour map of Mount Elephant.  Image courtesy of http://www.mountelephant.com.au

As we drove along the Campberdown-Lismore Road, the summit was clearly visible in the distance.  This is quite flat country, but Mount Elephant dominates the 3rd largest Volcanic Basalt Plain on Earth and can be seen for 60 kilometres in all directions. 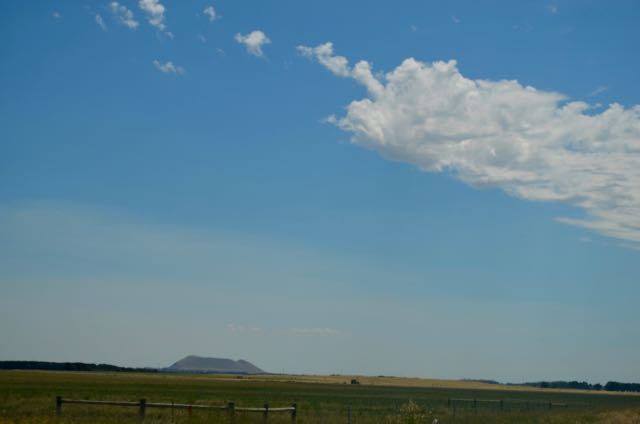 We then turned left onto the Camperdown-Derrinallum Road, and a few kms down the road, we entered the little town of Derrinallum, which only has a population or around 270 people.  There isn’t much here at all.  But I did see a quaint little pub which I had already earmarked for a quick drink after the activation.

An interesting fact about Derrinallum is that on 12 April 2014, the town became the centre of Australia’s biggest explosives clean up, after an explosion rocked the town. A local, Glenn Sanders, also known as ‘The Colonel’, who was an explosives expert and professional mechanic detonated his house which rocked the town and was heard over 15km away. The explosion left the town isolated for a number of weeks.

The turn off to Derrinallum 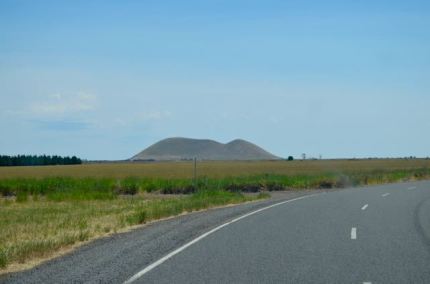 We then drove out along the Hamilton Highway for a short distance, until we found the turnoff to Mount Elephant.  But excitement quickly turned to disapointment, as we found a locked gate and a sign which read that the summit was only open on Sundays from 1.00 p.m. til 4.00 p.m.  Bugger!  I wondered how the hell I had missed that, as I had checked out the Mount Elephant website prior to leaving on the holiday. 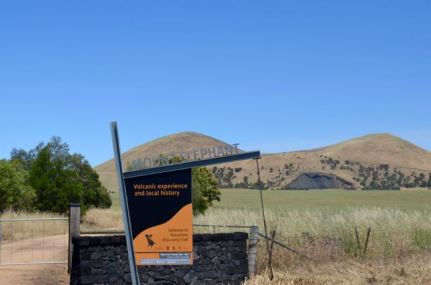 The entry to Mt Elephant off Hamilton Hwy

A view of Mount Elephant

Fortunately, there were some contact numbers on the sign for the Mount Elephant Committee of Management.  We telephoned one of the Commitee members, Lesley, who kindly drove out and met us at the gate.  She was extremely friendly and quite interested in what we were doing.  We followed her up in the 4WD to the carparking area, and then collected all of our radio gear, as she had offered to drive us up a little higher.  This sounded great, as it was a very warm day.  Lesley drove us up to the next gate and Lesley told us that this was as far as we could go by vehicle and we would need to walk the remainder of the way.

This is where all the fun started.  On a mild day, this would be quite a nice walk.  But it was hot!  And the grass on either side of the track was very high.  So Marija and I were very cognisant of making a lot of noise to try to scare off any potential unwanted visitors, in the way of snakes! 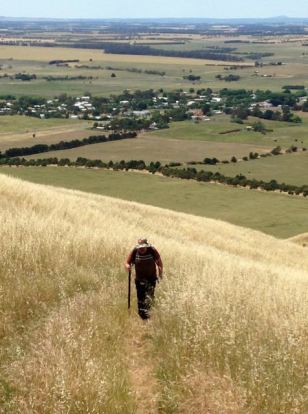 Heading up the summit

After quite a climb in the heat, and avoiding any snakes, and stopping regularly to remove the grass seeds from our shoes and socks, we made it to the top of Mount Elephant.  There, we were rewarded with some amazing views of the surrounding countryside.  In the distance you can see Mount Buninyong near Ballarat, and the Grampians between Dunkeld and Stawell.  We could also see our previous summit, Mount Leura near Campberdown.

Unfortunately there was no shade on the summit.  There are no trees here on Mount Elephant.  All that is at the top is the trig point marking the 339 metre above sea level point, and a small old rainwater tank.  The tank afforded some shade, but not a lot.  There is a small satellite receiver on the trig point, which is used for local GPS tractor guidance systems.

I secured the 7 metre telescopic squid pole to the rainwater tank with the aid of an octopus strap while Marija ran out the legs of the dipole.  For this activation I had brought along the Yaesu FT-817nd and ran 5 watts.

Above:- Aerial view of the summit showing our operating spot.  Image courtesy of google maps.

I headed for 7.090 and called CQ and this was answered by Robin VK5TN in Mount Gambier with a very strong 5/9 signal.  Robin gave me a 5/7.  This was followed by a call from Ron VK3VBI (5/9 both ways), then Brian VK5FMID in Mount Gambier (5/9 sent and 5/8 received).  And my fourth qualifying contact was with Tony VK5FTVR at Strathalbyn (5/7 sent and 5/6 received).  The 40m band seemed to be in pretty good shape.

I worked a further 13 stations from VK2, VK3, and VK5, before I was called by Tony VK3VTH who was operating portable from the Lake Tyres State Park, VKFF-0761.  Tony was my last caller on 40m.  And I was pleased there was not a pile up as this was a very hot summit and I was looking forward to that drink in the hotel.

So we lowered the squid pole and removed the links in the 20m/40m linked dipole, and I called CQ on 14.310.  This was answered by Rick VK4RF/VK4HA, followed by Brett VK2VW, Gerard VK2IO, and finally John VK6NU.  I was very pleased to be able to get John in the log.  Although not strong (5/1), he was perfectly readable due to the non-existant man made noise on Mount Elephant. 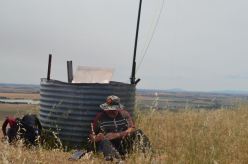 We spent just 30 minutes on the summit.  I had a total of 23 stations in the log.

We then commenced the climb down along the Borbidge walking track to the the carpark at the base of the Mount. 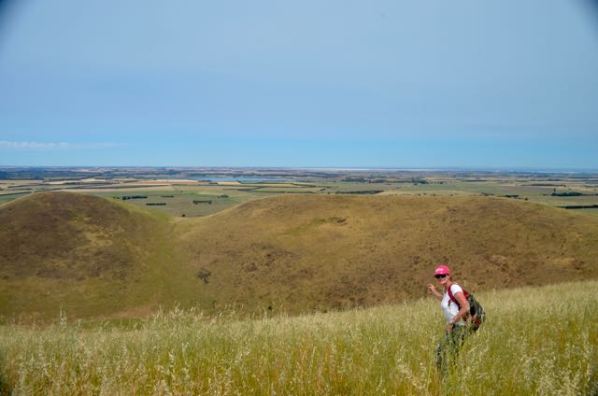 Marija making her way through the long grass

The trig point starting to fade in the distance

Looking back up the track, not far from the gate

After about 25 minutes we reached the carpark and some welcome shade.  The quarry situated at the carpark provided scoria for the nearby rail line to Ararat from 1911 to 1916. 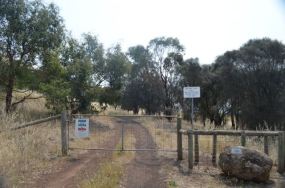 After getting back to the car and downing 2 litres of water each, we headed off to the Mount Elephant Hotel.  This was without a doubt, one of the hardest one point summits I have activated.  Mostly due to the heat, making it a challenging little walk. 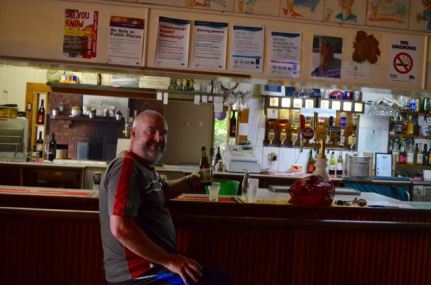 After a few quiet ales at the hotel, we drove north out through Mingay and Skipton on the Lismore-Skipton Road, until we reached the Western Highway at Beaufort.  We then drove west and into Ararat and booked in to our motel.  Marija was a little exhausted as you can see from the photograph below.