Our final activation for Wednesday 18th November 2015, was One Tree Hill, VK3/ VS-036, which is located just to the north west of Ararat in western Victoria.

I have activated this summit once before, back in September 2013.  For more information on that activation, please have a look at my previous post….. 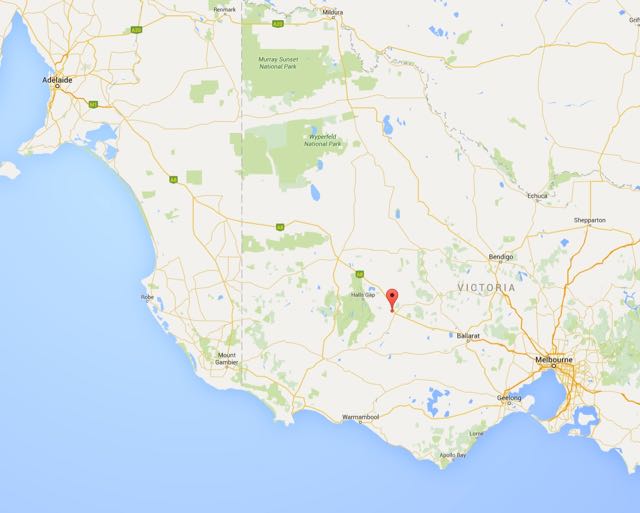 Above:- Map showing the location of One Tree Hill.  Image courtesy of google maps.

One Tree Hill is 569 metres above sea level and is worth 2 SOTA points.  It is a very easy summit to access.  After leaving the motel room we drove up Golf Links Road and then Picnic Road.  We then took One Tree Hill Road, which takes you up to the Ararat Regional Park entrance.  This park is made up of three separate blocks.  This is the Ararat Hills block which is 820 hectares in size.  The other two sections of the park are Dunneworthy block (2,670 hectares) and Bradys block (180 hectares).

Continue along this bitumen road and it will take you to the One Tree Hill lookout.  This is not the summit though.  At the end of the bitumen and the carpark, there is a narrow dirt track.  You need to head down this track to get to the summit.  This track is definitely not suitable for a conventional vehicle.  So if you have your car, leave it in the carpark, and walk the remainder of the way to the summit.  It’s not that far and is not an onerous walk.

Above:- Aerial shot showing the location of the summit, to the north west of Ararat.  Image courtesy of google maps.

We stopped briefly in the carpark and took some photographs of Ararat and the surrounding countryside.  There are some great views from here of the nearby Grampian Mountains, Mount Langi Ghiran, and Mount Cole.

As we had the Toyota HiLux we drove along the track for a few hundred metres until we found a clearing off the dirt track.  We parked the 4WD there, and then walked a short distance to another clearing and set up our gear there.

Above:- Aerial shot showing the location of the summit, further to the north of the lookout.  Image courtesy of google maps.

The summit is quite heavily wooden with gum trees, so I’m really not sure why it is called One Tree Hill.

I commenced calling CQ on 7.088.  I could not get onto my nominated operating frequency of 7.090 as the Kandos Net was running on 7.093.  It didn’t take long for the SOTA chasers to be queuing up to get in the log.  My first contact was with Ray VK3NBL, followed by Adrian VK5FANA, Ivan VK5HS, and then Bill VK3LY.  I was kept busy with a mini pile up with callers from VK1, VK2, VK3, VK4, VK5, and VK7.  The 40m band was in very good condition with excellent signal reports both ways.

I was pleased to be able to work Warren ZL2AJ, the New Zealand SOTA Association Manager.  Warren had a strong 5/8 signal to One Tree Hill from near Palmerston North on the North Island.  I also had some great QRP contacts.  They included Ian VK3BFR running 5 watts (5/8 sent and 5/9 received), and Andrew VK3JBL running 5 watts (5/8 sent and 5/9 received).

I worked a total of 46 stations on 40m before heading to 20m.  I commenced calling CQ on 14.311 and this was answered by Rick VK4RF/VK4HA with a very strong 5/9 signal.  This was followed by EA4DTV in Spain, Luciano I5FLN in Italy, and then Rudi DL3ARS in Germany.  Signals on the long path from Europe were very good.  Early on during my 20m stint, John VK6NU called in a number of times from Western Australia, but unfortunately he was not able to hear me.  But we did make it some 30 minutes later, albeit a little difficult.  I went on to work a total of 36 stations on 20m in VK4, Spain, Italy, Germany, Austria, France, Belgium Greece, Slovak Republic, Russia, Ukraine, England, and Switzerland.

After about 90 minutes on One Tree Hill I had a total of 82 contacts in the log.

Below is the sunset out to the west as we were leaving the summit.

We headed back in to Ararat and went to one of the local hotels only to be told that they did not serve meals on a Wednesday night.  So we headed down to Sicilians Restaurant and I am very pleased we did.  The service was excellent, and the meal was superb.  My meal was so big, I couldn’t finish it, and we needed to take some of it home in a ‘doggie bag’.