We had three planned activations for Wednesday 18th November, 2015.  They were all hilltop activations for the Summits on the Air (SOTA) program.  They being Mount Leura, and Mount Elephant whilst on our way to Ararat, and One Tree Hill, once we had reached Ararat. We had booked in to stay for two nights at Ararat.

Our start to the day on Wednesday morning was breakfast at one of the cafes on the foreshore at Lorne.  It was a beautiful warm morning, and it was very relaxing, enjoying the cooked breakfast, the freshly squeezed orange juice, and a hot coffee, whilst enjoying the view.

We left Lorne, and headed out along the Deans Marsh-Lorne Road, through the magnificent Great Otway National Park.  We had a 100 km drive ahead of us until we reached our first summit, Mount Leura.  We were rewarded with some nice views of the countryside as we exited the north western side of the Otway Ranges.

Above:- Map showing the location of Mount Leura.  Image courtesy of google maps.

As we drove towards Campberdown we saw a little hill which we assumed to be the summit.  Wrong!  The summit came and went and looked way too close on the GPS to be Mount Leura.

We continued on towards Campberdown and saw another summit which again we assumed to be Mount Leura.  Wrong again!  This turned out to be another false alarm. 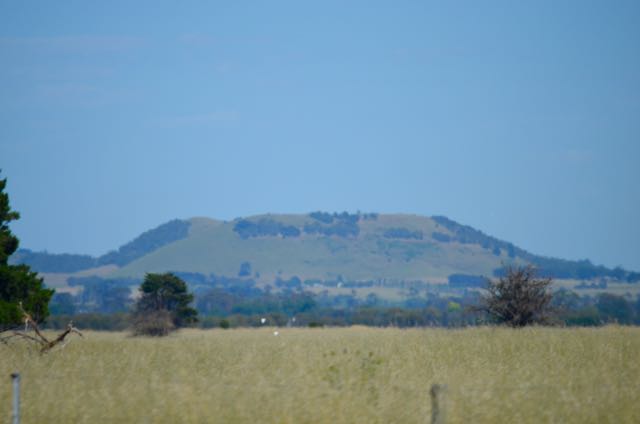 Mount Leura, VK3/ VS-050, and the adjacent Mount Sugarloaf are part of a large volcanic complex known as the Leura Maar, which was formed over 20,000 years ago, following a series of major volcanic eruptions.  Mount Leura is 310 metres above sea level, and is worth 1 SOTA point.  The summit is located in the third largest volcanic plain in the world.  Mount Leura is believed to have last erupted between 5,000 and 20,000 years ago.  The name Leura, means ‘big nose’ in local aboriginal dialect.

We accessed the summit via Mount Leura Road which is on the south eastern side of Campberdown.  Prior to heading up the hill we reached a welcome sign for the Mount Leura and Mount Sugarloaf Reserves. 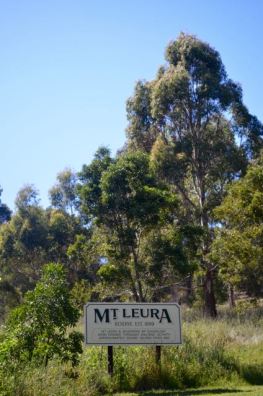 We drove to the carpark at the top of Mount Leura Road.  There are some great views from here of the surrounding countryside.  There are also some very good interpretive signs. 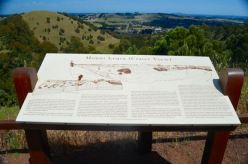 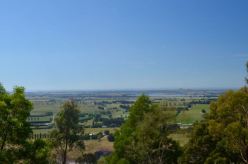 We set up at a conveniently provided table and benches adjacent to the carpark.  We used a fencepost to secure the 7 metre telescopic squid pole, with the handy octopus strap.  It was quite a warm morning and unfortunately there was no shade. 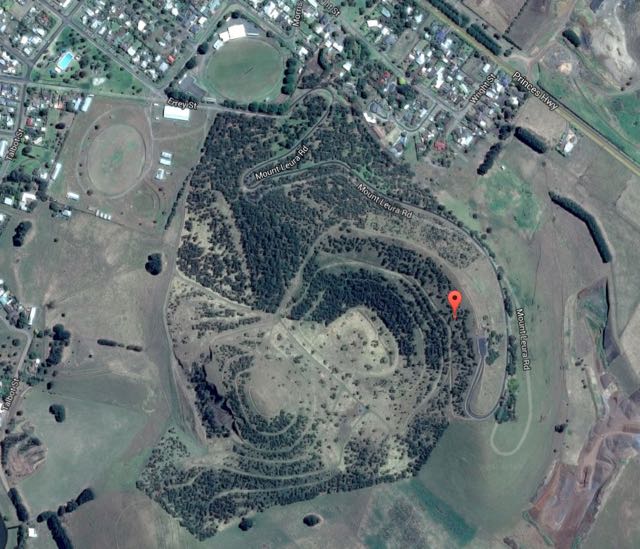 I was set up and ready to go by 2330 UTC (8.30 a.m. Victorian local time).  I commenced calling CQ on 7.090 and this was immediately answered by Adrian VK5FANA on the Yorke Peninsula with a strong 5/8 signal.  This was followed by Peter VK3PF with a very strong 5/9 signal, and then Ivan VK5HS who was also 5/9 from the Riverland region of South Australia.  My fourth and qualifying QSO was with Tony VK5FTVR at Strathalbyn, south of Adelaide with a strong 5/8 signal.

It was a weekday so I didn’t expect to be swamped by callers.  But I was pleasantly surprised to have quite a good steady flower of SOTA chasers from VK1, VK3, VK5, and VK7.  Band conditions were very good with all signals between 5/7 to 5/9. 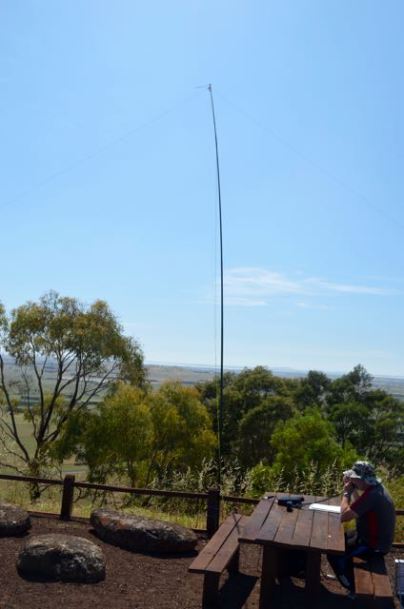 View out to the north west

I then took a break from the radio and went for a short walk up to the trig point on the summit and admired the views of Campberdown and the surrounding countryside.

View out to the north west 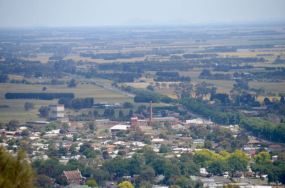 We were able to see our next SOTA summit in the distance, Mount Elephant, VK3/ VS-047.

I returned to my operating spot and lowered the squid pole and removed the links in the dipole so I could operate on 20m.  I headed to 14.310 and called CQ a number of times, but unfortunately I only had two takers.  They being Gerard VK2IO and Andrew VK2MWP.  Some QSB was noted on their signals.

We packed up the gear and headed in to Campberdown.  I was satisfied with a total of 29 contacts in the log, and a unique SOTA summit as an Activator. 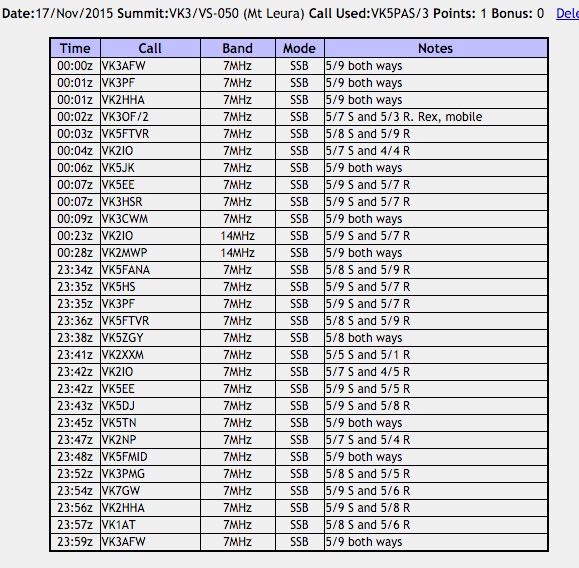 Once back in Campberdown we visited the Campberdown Visitor Centre which is located in the old courthouse.  This is an excellent tourist centre and the volunteer on duty was extremely helpful and friendly.  She clearly had a great love for her town.  We did not have a lot of time, but we did take a quick drive around the town to admire some of the heritage buildings, and we had also been encouraged to go for a drive out to the two volcanic lakes. 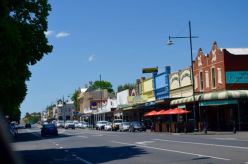 The main street of Campberdown

We then drove out to the deep volcanic crater lakes, Bullen-Merri and Gnotuk.  Bullem-Merri has a maximum depth of 66 metres and is clover leaf in shape, indicating that it was probably formed by two overlapping maar volcanos. 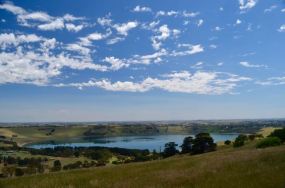 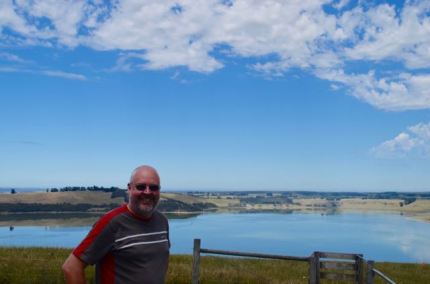 Below is a view of Mount Leura from the Campberdown-Cobden Road. 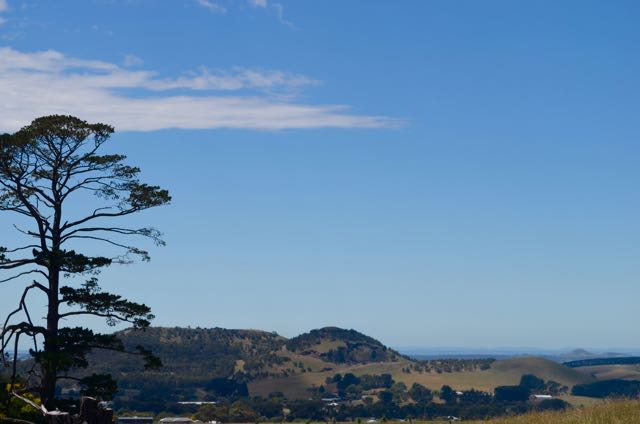 After leaving Campberdown, we headed off to our next SOTA activation, at Mount Elephant, near the little town of Derrinallum.