This morning I headed out with Marija to activate Mount Lofty summit, VK5/ SE-005 for Summits on the Air (SOTA).  The summit is also located within the Cleland Conservation Park which qualifies for both the VK5 National and Conservation Parks Award (5CP-042), and the World Wide Flora Fauna (WWFF) program (VKFF-0778).

We had enjoyed a quiet night on New Years Eve this time around, so I was completely free of a hangover.  It was shaping up to be a fun morning, with many planned SOTA activations, which seems to be becoming a New Years Day trend here in Australia. 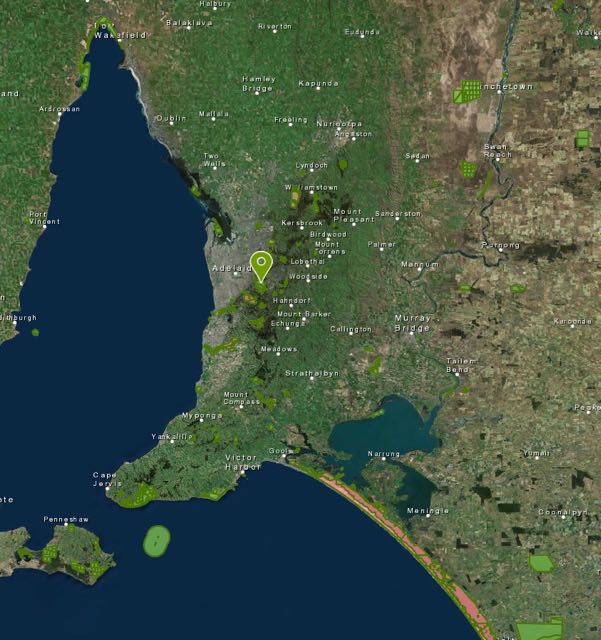 Above:- Map showing the location of the summit and park.  Image courtesy of Location SA Map Viewer.

Mount Lofty is just a short drive from our home.  We travelled west along the South Eastern Freeway and then north along Summit Road.  Along the way we passed Mount Lofty House, which was built in 1852-1858 by Arthur Hardy, a politician, lawyer, pastoralist and businessman.  It is now offers accomodation, dining, and hosts many weddings and conferences.  It overlooks the Piccadilly Valley, a market gardening centre in the Adelaide Hills.

Mount Lofty House with the TV towers in the background

View out to the east 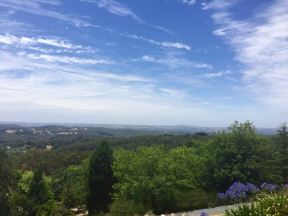 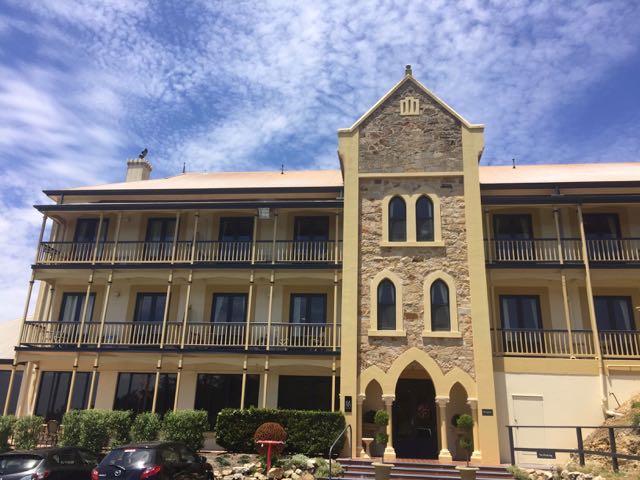 Summit Road takes you straight up to Mount Lofty summit.  There is a main carpark here for visitors to the Mount Lofty Visitor Centre, and the Summit Restaurant and Function Centre.  A small fee applies to park your car there.  But we parked the 4WD just as you drive in the main entrance.  There is a small car parking area on the eastern side. 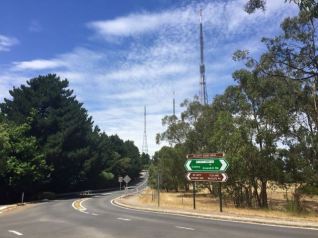 We walked a few hundred metres along the Warre Track, until we reached my normal operating spot for Mount Lofty.  It was already a warm morning, with an expected top temperature of 35 deg C.  But it was amazing how many people who were out bushwalking in cycling along the tracks in the park.

Above:- Map of the Conservation Park, showing my operating spot at Mount Lofty.  Image courtesy of Property Location Browser.

Whilst setting up and during the activation, Marija and I had quite a few onlookers and a number of people who approached us to see what we were up to.  I always take the time to explain about the hobby and really enjoy engaging with people about this amazing hobby of amateur radio.

For this activation I ran the Yaesu FT-857d, 30 watts, and my 20m/40m linked dipole and my 15m dipole, both supported on a 7 metre telescopic squid pole.

Looking back along Warre Track 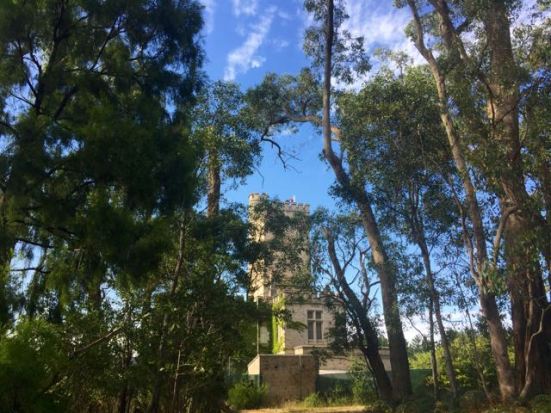 Next up was Cliff VK2NP with a good 5/5 signal and he reciprocated with a 5/5 for me.  My third contact was with Amanda VK3FQSO who was very low down (5/1) and who gave me a 4/1 signal report.  I called CQ a number of times after my QSO with Amanda but sadly there were no takers.  I saw a spot on SOTAWatch for Compton VK2HRX on 7.100 so I had a listen there, but could not hear Compton.  It looked like the 40m band was not in great shape.

I then headed to 20m and spotted myself on SOTAWatch and called CQ on 14.310.  It wasn’t long before Rick VK4RF/VK4HA called in, with a mighty fine 5/9 signal.  Next, was Rob VK4AAC/5, just down in the valley from me at Hahndorf.  But unfortunately that was the extent of callers on 20m.  It went very quiet, very quickly.

The SOTA goat had bleated on my iphone and showed a spot for Justin VK7TW on 40m.  So thats where I headed back to, and made contact with Justin who was on Collins Bonnett, VK7/ SC-002.  Justin my first Summit to Summit contact for the day (5/2 sent and 5/1 received).

I then headed back to 7.144 and called CQ again, and this was answered by Marcus VK2SK, followed by Steve VK7CW, and then Peter VK4SIR at Ipswich.  But again, callers  slowed down very quickly.  I took the opportunity of tuning around the band and worked Andrew VK1AD on VK1/ AC-008 in the Namadgi National Park. 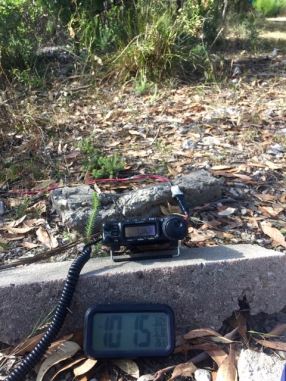 It was at this time that I headed to 7.115 and this is when the band seemed to open up somewhat and all the fun commenced.  My first responder to my CQ call was Gerard VK2IO who was activating SOTA peak Mount Elliot, VK2/ HU-093 (5/2 sent and 5/4 received).  I worked a further 31 stations after Gerard, before the UTC rollover.  They were in VK1, VK2, VK3, VK5, and VK7.  This included the following summit to summit contacts:

The close in propagation was not working, with my only VK5 contacts being Peter VK5PET and Damien VK5FDEC. 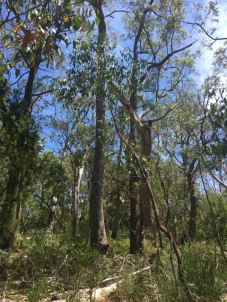 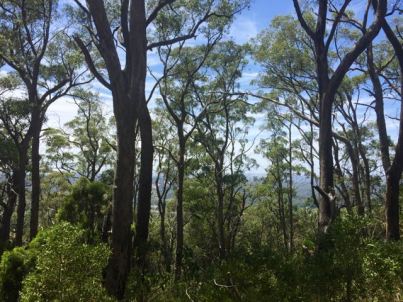 After the UTC rollover I worked a further 33 stations on 7.115.  This included the following Summit to Summit contacts:

Again, just a sprinkling of VK5’s.  They being Roy VK5NRG and Paul VK5FUZZ at Wellington.

I also spoke with Andrew VK3JBL who was operating QRP.  Andrew was a little difficult to copy, so I got up from my operating spot, with bum up in the air, and ear down to the speaker.  Just as a group of bushwalkers went passed.  They must have wondered what the hell I was doing.

I had been trying to get to 15m for a while, so when things became quiet, I lowered the squid pole and ran out the 15m dipole.  I called CQ on 21.244 and this was answered by Graeme VK5ZVC at nearby Mount Barker.  I saw a spot on SOTAWatch for ZL2AJ on 21.270, so after working Graeme I quickly headed up there but could not hear anything other than a rather weak USA signal.  I also saw a spot for Lewis VK6FLEW on 21.200, but again, unfortunately I could not hear Lewis.  So I headed back to 21.244 and called CQ, where I worked a further 4 stations, all from Queensland.

It was starting to really heat up, so I quickly went to 20m and worked a total of 7 stations including the following Summit to Summit contacts:

After nearly 3 hours on the summit/in the park, I had a total of 93 contacts in the log, including a total of 36 x Summit to Summit contacts.  This was a really enjoyable activation.

After packing up we headed up to the Mount Lofty Visitor Centre. 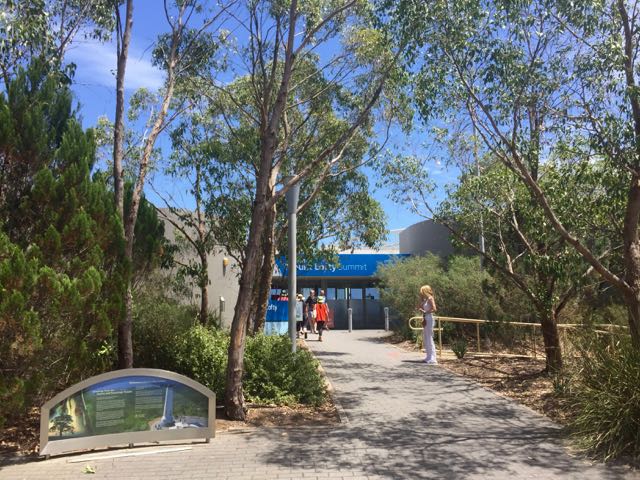 As we were walking in, we spotted this little fella, enjoying a snooze.

It had really warmed up and was approaching the predicteed 35 degrees C, so we took some time out for a nice cold ice block.

The summit was quite busy, with a lot of tourists, enjoying the view, a coffee in the shade, and a meal in the restaurant.

There are some great views here to be had of the city of Adelaide. 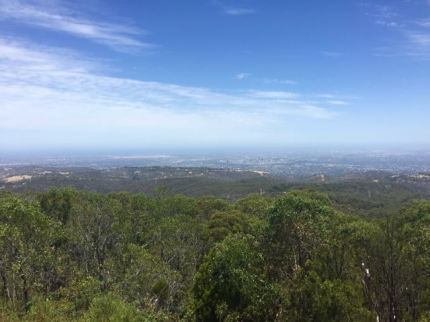 The obelisk on the summit is known as Flinders Column.  It commemorates the sighting and naming of Mount Lofty, by explorer Matthew Flinders in 1802.

Another dominant feature on the skyline at Mount Lofty is the Fire spotting tower, which was erected in 1982.  It is 32 metres in height. 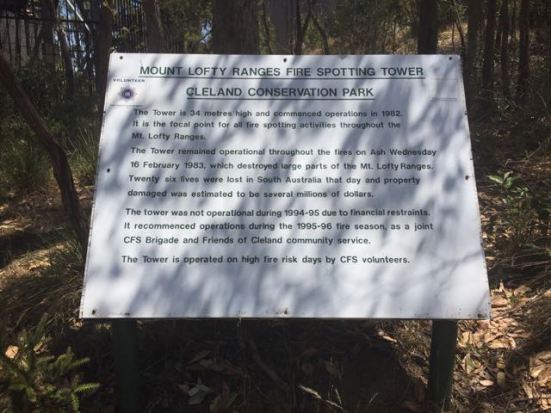