After leaving Myponga, Marija and I continued south along the Main South Road, with our destination being the Deep Creek Conservation Park, 5CP-054 and VKFF-0780.  Deep Creek CP is located about 108 km south of Adelaide on the Fleurieu Peninsula. 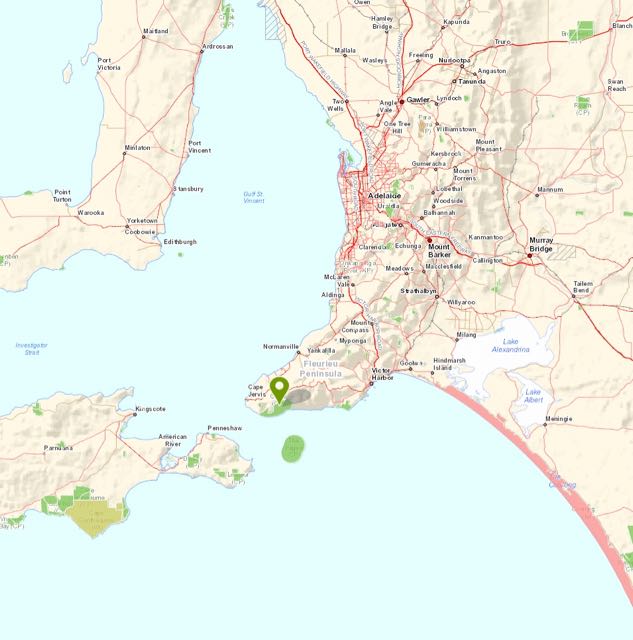 After passing the Myponga Reservoir we then drove through Wattle Flat until we reached the little two of Yankalilla.  I worked here way back in the mid 1980’s.  We continued on to Normanville and followed the coast, admiring the fantastic views of Lady Bay and Yankalilla Bay.  This is a very scenic drive through the beautiful Fleurieu Peninsula.  We continued on to Second Valley and the little town of Delamere.  It was here that we turned left onto Cole Road.  It wasn’t long until we reached a sign for the park and Goondooloo Cottage on the corner of Cole Road and Dog Trap Road. 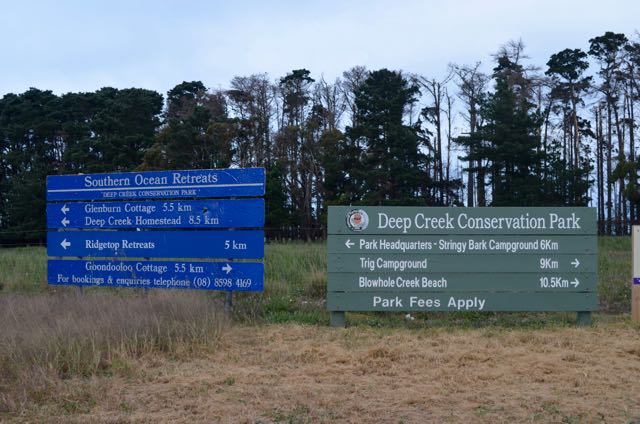 The land on which Goondooloo Cottage stands and adjacent areas was originally opened up by Mr. Aaron Bennett in the 1880’s.  The nearby Aaron Creek and its walking trail commemorate this early pioneer.  The land was periodically fired on a north wind, burnt to the coast and then grazed with sheep and cattle until the scrub became too thick when the process was repeated.

In 1937, Arthur and Mavis Loch purchased the land and the adjacent ‘Tent Rock’ property where they built their house and commenced to clear the land using bulldozers.  The area around the cottage was cleared in 1951 to 1952 and the dam below the cottage was constructed about the same time.

Lennard and Hazel Graves, store keepers from Streaky Bay purchased the land from the Loch’s in 1955 and called their property ‘Karella’.  It was on this land that Mr. Graves and his sons Colin and Ross built a one room shed/garage from hand made bricks.  This was the basis of the cottage.  It was shortly after that a kitchen, two bedrooms, outside bathroom and toilet, laundry and enclosed sleepout/verandah were added. 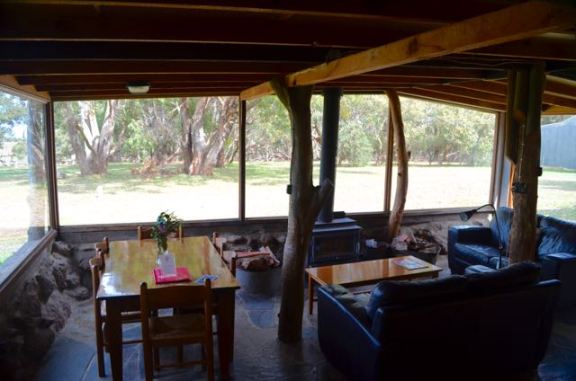 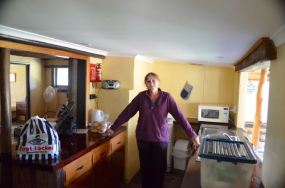 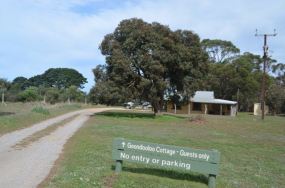 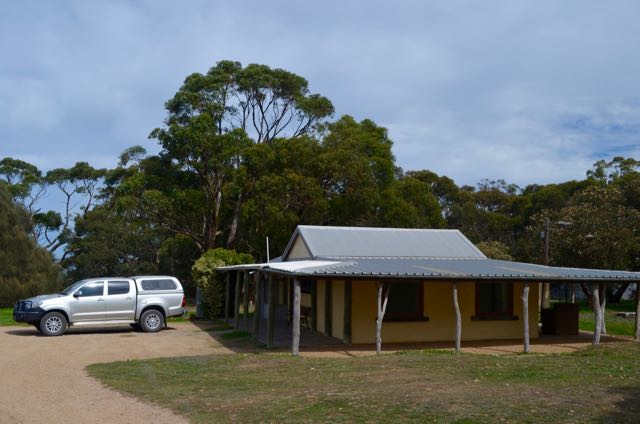 This was to be a ‘temporary dwelling’ until 1961 when Mr. and Mrs. Graves built the house south of the cottage.  The cottage was then used as aresidence by Mr. Graves’ son, Ross and his wife Jean.  The surrounding land continued to be cleared and a dairy was established with the milking shed approximately 400 metres down the road from the cottage.

In 1972 the property and buildings were sold to W.H. ‘Bill’ McGrath and Anntette Forrest who renamed the property ‘Goondooloo’, the local aboriginal name for the Southern Cross star constellation.  The cottage underwent refurbishing, with front glass sunroom internal bathroom and vernadah added.  In 1979 the property was sold to the National Parks and Wildlife Service as part of the Deep Creek Conservation Park.

The cottage was leased out as a private residence until 1981 when it became the first Park Headquarters.  It was used for this purpose until the headquarters were shifted to the current location above Glenburn Cottage in 1985.  The building was used as a temporary Ranger’s residence and as a storage area until 1987 when it became a holiday cottage.

In 1984, Southern Ocean Retrests took on the management of the cottages in Deep Creek Conservation Park and embarked upon an extensive rennovation program for each cottage.  Work on Goondooloo commenced in 1998 and included a complete refit of the bathroom and kitchen areas, the laying of slate floors throughout and use of larger windows.  Other less visible changes included the establishment of an independent rainwater supply system no longer leaving the cottage at the mercy of dam water.  Revegetation of the surrounding area was undertaken at the same time by Southern Ocean Restreats utilising seedlings grown from seeds collected in the park.  These include stringy bark, sheoak, pink gum, cup gum and mauye bottle brush.

Marija and I highly recommend a stay here.  More information can be found at…… 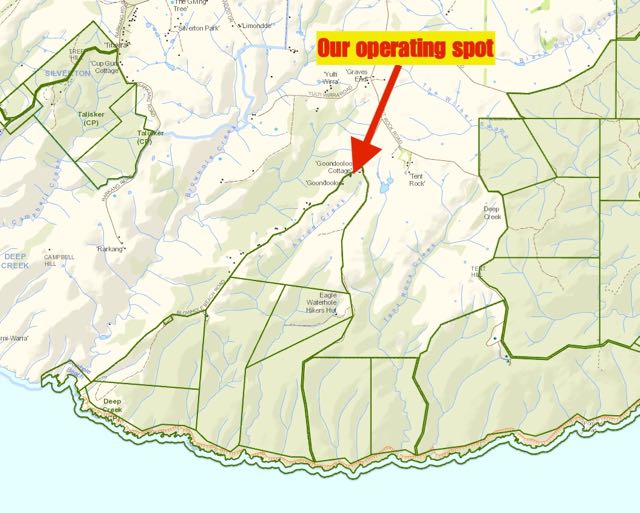 Deep Creek Conservation Park is 44.96 km2 (about 4,500 hectares) and is a spectacular park, with very thick scrub amongst some very hilly terrain.  The park contains some of South Australia’s most spectacular semi-wilderness areas and coastal scenery.  There are some amazing views to be enjoyed out to the Southern Ocean and across Backstairs Passage to Kangaroo Island.    The famous Heysen Trail passes through the park, and there are numerous other walking trails through the park.  Deep Creek CP was named after the waterfall which flows through the year.  The park is alive with Western Grey kangaroos.  Over 100 species of birds have been recorded in the park, and we certainly saw a lot including Wedge Tailed eages, Superb Blue wrens, numerous honeyeaters, and Rosellas. 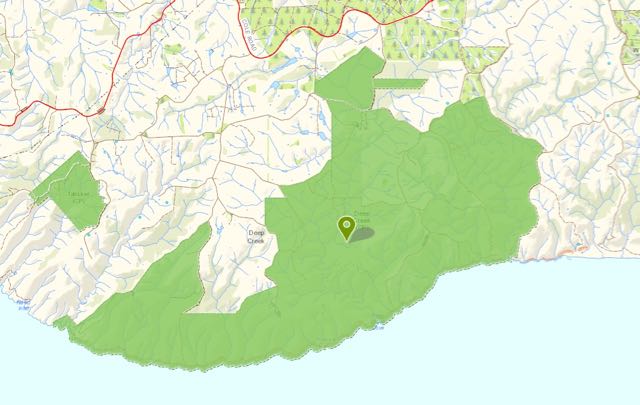 After unpacking and settling in to the cottage, Marija helped me set up the portable station in the ‘back yard’ of the cottage.  I ran the Yaesu FT-857d, 400 watts, and the 20m/40m linked dipole for the activation (supported on the 7m heavy duty squid pole).  My first contact was with Mick VK3PMG who kindly spotted me on parksnpeaks.  This was followed by many of the ever keen park hunters including John VK5BJE, Amanda VK3FQSO (running just 1 watt and was 5/3), and Tony VK7LTD.

Nine QSOs into the activation and I worked Stef Vk5HSX ‘Park to Park’.  Stef was operating portable in the Little Dip Conservation Park 5CP-120 and VKFF-0904, in the South East of South Australia.  Unfortunately I started to experience the normal QRM from a VK2 Net on7.146.  Bill VK4FW tried calling but we just couldn’t quite make it due to the QRM, which fortunately did not last for long.  I continued to work a steady pile up of callers from VK2, VK3,, VK5, and VK7.  Sadly, the QRM free frequency didn’t last, with the stations starting up again on 7.144.  I perservered and worked a number of other stations including another “Park to Park” contact, this time with Rob VK4AAC/3 in the Barmah National Park VKFF-0739.  But it just got too tough and I decided to QSY to 20m. 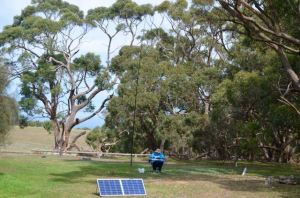 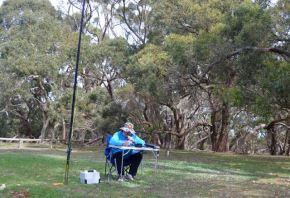 I commenced calling CQ on 14.310 and was pleased to get Bill VK4FW in the log as number one on 20m.  This was followed by Cliff VK2NP, Jim VK1AT/3, and then my first DX for the park, Sergey RA3PCI in Russia.  This was followed soon after by Pista HA8CE in Hungary.  I then spoke with Garry VK1ZZ/4 in the Forty Mile Scrub National Park VKFF-0181, my first “Park to Park” for this activation on 20m.  I worked a few more VK4 and VK6 stations and also Alex UA3AR in Russia, but it was still a little too early for good long path Europe propagation.

So I headed down the band to the ANZA DX Net and checked in there.  I worked a total of 7 stations on the Net from VK1, VK4, VK6, New Caledonia, South Cook Islands, and China.  I then headed back to 40m. 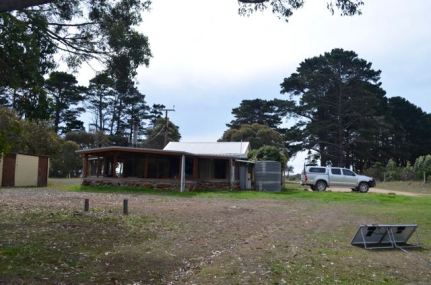 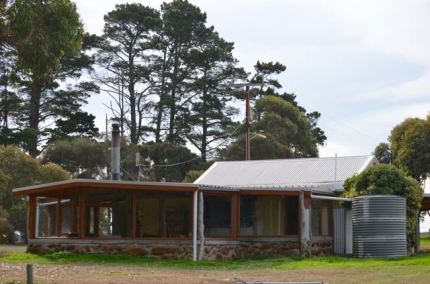 I had a listen on 7.144 and heard Peter VK5PET calling CQ from the Mount Magnificent Conservation Park 5CP-148 and VKFF-0916.  Peter was activating the park as part of our normal Friday afternoon/evening event for the VK5 National and Conservation Parks Award, and had a beautiful 5/9 signal.  I knew that there were some more VK5 Park Activators out and about, so I decided to have a tune across the 40m band before finding somewhere to prop and start calling CQ.  It didn’t take me long to find Adrian VK5FANA on 7.130, operating from the Innes National Park 5NP-010 and VKFF-0243.  Adrian had a very strong 5/9 plus signal coming in from the bottom of the Yorke Peninsula.

Soon after I found Peter VK3PF on 7.100 on SOTA summit Granite Peak, VK3/ VG-137 which is located within the Alfred National Park VKFF-0618.  I then headed up to 7.150 and started calling CQ and it wasn’t long before the throng of park hunters had found me.  First taker was Ron VK3AFW, followed by Matt VK3FORD, and then Peter VK3TKK operating portable in the Organ Pipes National Park VKFF-0627.  Quite a pile up ensued with callers from VK1, VK2, VK3, VK4, and VK5, all with excellent signals.

Whilst operating I had a crowd of onlookers.  No not people, but a mob of kangaroos who were grazing in the clearing about 100 feet from where I was operating. 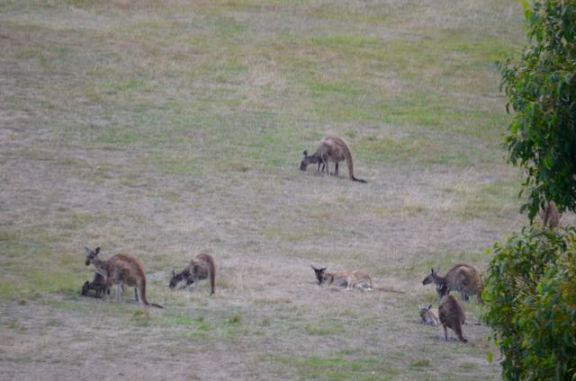 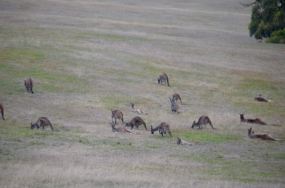 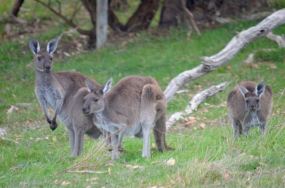 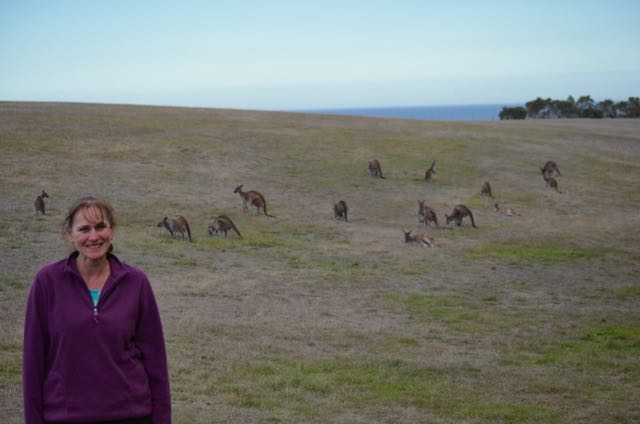 When things quietened down a little I took the opportunity of looking around the 40m band again, and I soon found Gerard VK2IO in Gariral National Park VKFF-0191.  This was a very first time activation of the park, so I was very pleased to get Gerard in the log with a beautiful 5/9 signal.

I decided to head back to 20m and started calling CQ on 14.245.  To my surprise this was immediately answered by Mike M0FCD in England with a strong 5/9 signal (5/6 received).  This was followed by Steve who kindly placed me on the DX Cluster.  This clearly resulted in quite a few subsequent calls from Europe.  I worked into Italy, Belgium, Poland, Spain, Hungary, England, Portugal, Netherlands, Russia, Finland, France, Germany and Ukraine.  Signals were quite good.  In fact the best I had heard whilst out portable for some time.  I even got to work my good mate Danny ON4VT.

Danny asked if I could QSY up the band to work a Belgian Foundation operator.  Apparently they cannot operate below 14.250.  So I headed up the band to 14.285 where I spoke with ON3EVO/m (5/5 both ways).  I then returned back down to 14.245 where I worked into VK2, Alaska, Belgium (including my mate Swa ON5SWA), Germany, Slovak Republic, and Finland.  I then headed inside the cottage for some dinner and a few beers from the Smiling Samoyd Brewery at Myponga. 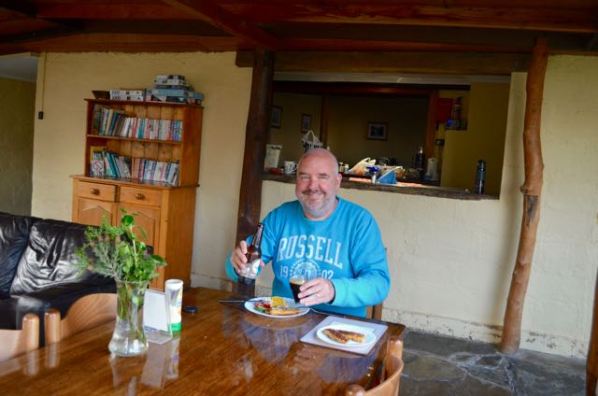 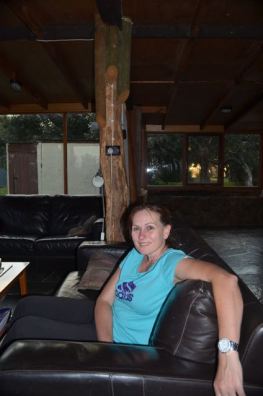 After dinner, I headed back outside again and called CQ on 7.150, which was answered by Rick VK5FGFK, followed by Lewis VK2JDW mobile, and then Darrell VK3AWA.  Next in the log was Oliver ZL1AAW in Auckland.  Band conditions were excellent again, with further calls from VK3, VK4, and VK6.  This included contacts with John VK6VZZ and Jonathan VK6JON, who were both mobile in Perth.

It was approaching 8.00 p.m. South Australian local time (0930 UTC) so I headed to the 7130 DX Net where I booked in and subsequently worked into VK4, VK6, VK7, and USA.  This included another “Park to Park’ contact with Garry VK1ZZ/4 in Forty Mile Scrub, Bill W1OW in Massachusetts in the USA, and Carstern VK6PCB portable on the banks of the Swan River in Perth, running just 5 watts. 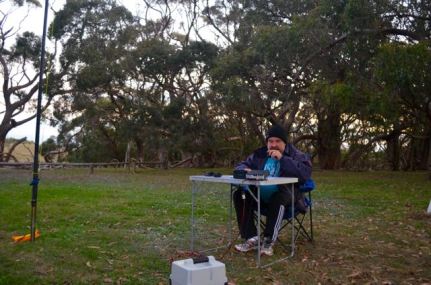 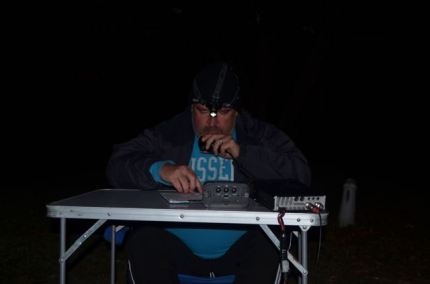 It was the end of a great day.  I had 113 contacts in the log already from Deep Creek.