I activated 6 different Conservation Parks down on the Fleurieu Peninsula south of Adelaide, and had a total of 602 QSOs.

I activated the following parks between Friday 1st and Monday 4th:-

I will add some more photos and info here my WordPress site in the coming weeks.

I will also start compiling some stats re the weekend and will post those details here once complete.

Again, thanks to everyone who took part.

On my way home from Victoria last week (Wednesday 30th March 2016) I called in to the Wolseley Common Conservation Park 5CP-258 and VKFF-1125, for a brand new activation for the World Wide Flora Fauna (WWFF) program.  The park had been activated previously for the VK5 National and Conservation Parks Award, but this was to be the very first time that the park had been put on air for WWFF/VKFF.  It was also to be a unique park for me.

The Wolseley Common Conservation Park is located about 287 km south east of Adelaide and just 4 km from the South Australian/Victorian State border.

Above:- Map showing the location of the Wolseley Common Conservation Park near the Victorian border.  Image courtesy of Location SA Map Viewer.

Travelling west on the Western Highway in Victoria, I turned off at the Serviceton Road and made a short detour into the little town of Serviceton.  Why?  It was to view the historic Serviceton Railway Station.  I have been here before, but this building always impresses me.  The town of Serviceton was named after Sir James Service, Premier of Victoria in 1880, and again from 1883-1886.

In 1887, when the Victorian and South Australian railways were joined at the old State border, a railway station was constructed on the border.  The cost of the 3 level building was to be equally shared by the 2 colonies.  It was constructed of Horsham made bricks on the then ‘Disputed Territory’ and was completed in 1889.

The State border was intended to be on the 141st meridian east, however owing to a surveying error, border markers were placed 3.6 km west of the meridian.  In November 1913, the State of Victoria finally succeeded in having the erronously surveyed border declared to be the legal border .  As such, Serviceton is now fully in Victoria.

Today, the railway station is no longer in use, however The Overland and freight trains, pass through the town of Serviceton. 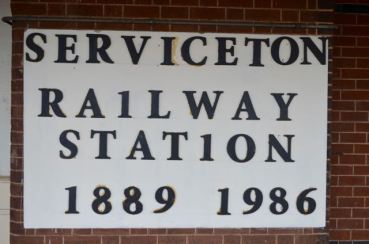 After leaving Serviceton I travelled west along the Serviceton-Wolseley Road, crossing the South Australian/Victorian State border.

It wasn’t long until I reached the little town of Wolseley, which has an area population of about 351 people.  The town is situated about 5 km south of the Dukes Highway.  Wolseley was first proclaimed as a town in 1884 and was initially named Tatiara. 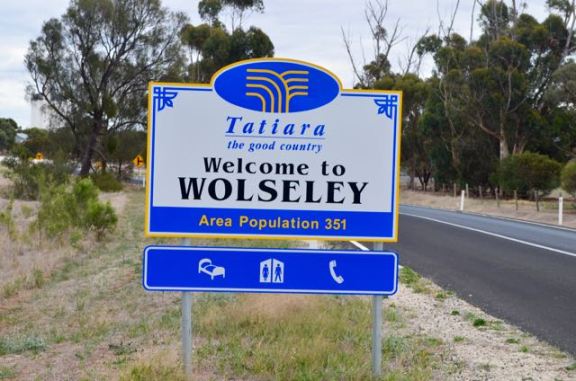 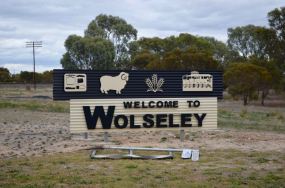 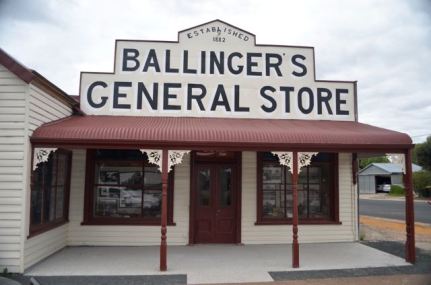 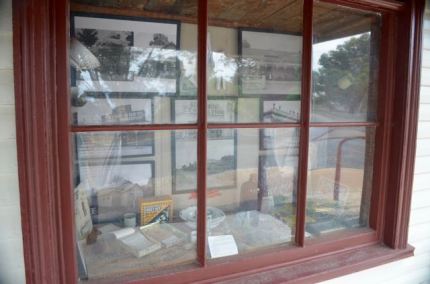 During the early 1880’s the railway line from Adelaide to Wolseley was opened.  The railway line from Melbourne to nearby Serviceton was completed in 1886.  The remaining ‘3 miles’ of track from Wolseley to Serviceton was completed by the South Australian Railways in 1887.  The railway station in the town was named after Field Marshal Garnet Joseph Wolseley, 1st Vicount Wolseley KP, GCB, OM, GCMG, VD, PC, who was the Commander in Chief of the British Army.  The name of the town was changed to match the name of the station on the 20th February 1941. 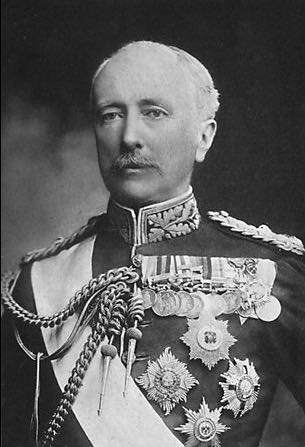 Wolseley Common Conservation Park is a small park, comprising about 25 hectares of one of the few remaining stands of Buloke Woodland on gilgai soil (comes from an aboriginal word meaning small waterhole), which is classified as endangered under national legislation.  The park which was proclaimed on the 29th November 2001, comprised the former parklands of Wolseley.  The commonages were used by locals for depasturing animals, firewood gathering, recreation and rubbish dumping.

The Buloke Woodland conserved by the park has been found to represent the best example of a remnant pure Buloke Low Woodland ecosystem on gilgai soil in South Australia. About 68 indigenous plant species can be found in the park, with 32 of those being of State and or Regional conservation significance.

It is reported that by the 1960’s, the land that now forms part of the park was reported to have been reduced to virtually bare ground with only a few scattered Buloke trees.  But with the decline of the town, the associated pressures on the land abated, and native vegetation commenced to regenerate.

It is estimated that Pre-European vegetation cover for Buloke Woodland was around 18,400 hectares, and currently only about 530 hectares remains (2.9%). 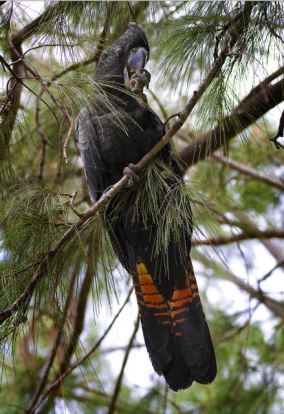 I set up on the western side of West Terrace, on the southern side of the town of Wolseley.  I drove along a track which follows the fenceline, and established the station in a clearing. 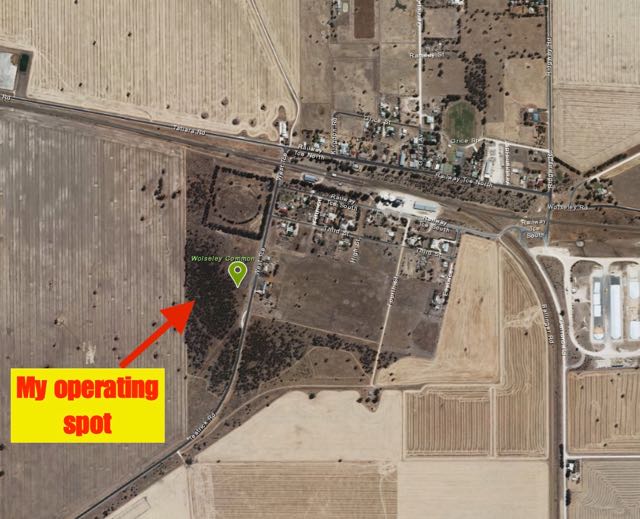 Above:- Map showing the location of the Wolseley Common Conservation Park on the outskirts of the town of Wolesley and my operating spot.  Image courtesy of Location SA Map Viewer.

Enroute to the park I had telephoned John VK5BJE and asked him to place an alert for me on parksnpeaks, which he kindly did.  I then switched the transceiver in the 4WD over to 7.144 and heard John chatting to Adrian VK5FANA, waiting for me to come up.  So it was appropriate that John and Adrian were my first two contacts from the park.  This was followed by park devotees Col VK5HCF, Peter VK3PF, Peter VK3TKK mobile, and Mick VK3PMG.  Many of the normal ‘suspects’ called in across VK2, VK3, and VK5.

Unfortunately, after being on 7.144 for 15 minutes, I started to experience QRM from some stations on 7.142.  The splatter was just too great, so I decided to QSY to 20m.  I headed for 14.310 as Peter VK3PF had informed me that Glen VK6HAD was on a SOTA summit on that frequency.  I was pleased to find Glen coming in very well, with a nice 5/3 signal.  Not a strong signal, but perfectlly readable due to the low noise floor in the park.

I then worked Paul VK2KTT, Russell VK4ARW, Steve VK7CW, and finally Rick VK4RF/VK4HA.  All had solid 5/9 signals into Wolseley Common. 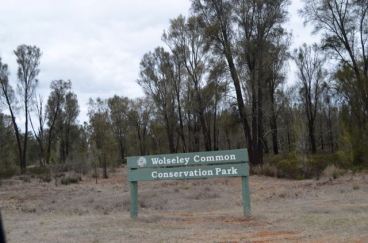 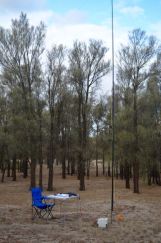 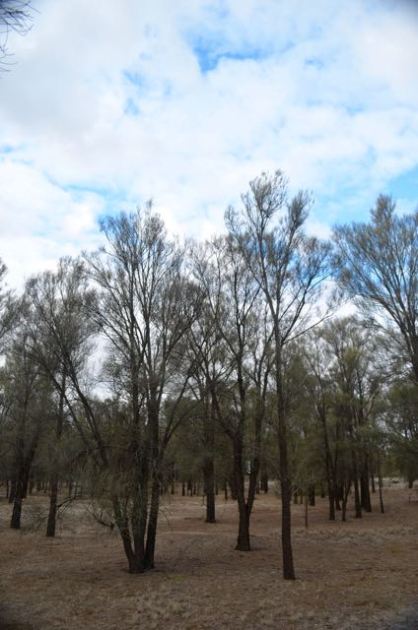 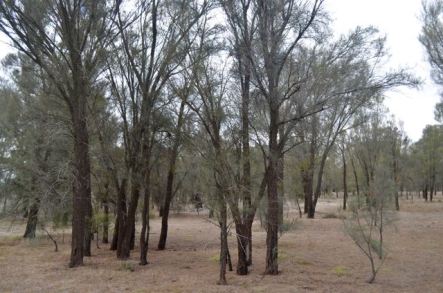 I then headed back to 40m and called CQ on 7.144 and this was answered by Lee VK2LEE.  The SOTA Goat app on my iphone then bleated, indicating that there was a SOTA activator out and about.  As it was quiet, I took the opportunity of heading to 7.090 where I worked Derek VK3XY on SOTA peak Mount Sarah VK3/ VE-032.  I then returned back to 7.144 where I worked a total of 27 stations in VK1, VK2, VK3, VK4, and VK5.  This included Gerard VK2IO who was portable on SOTA summit Mount Wolgan VK2/ CT-065 located within the Gardens of Stone National Park VKFF-0190.

Time was pushing on, so I had one last quick listen on 20m where I worked my good mate Greg VK8GM, Fred OE6BMG and Luciano I5FLN.  Sorry to all the other European stations that would have liked to have got this park in their log.  I still had a 3 hour journey home ahead of me and I had to go QRT.

Thanks to those who patiently waited for me on 2 occasions after my squid pole de-telescoped.  It is a brand new pole from Haverfords and has a crook section, and occasionally in high winds it collapses.  And that’s what it did here in Wolseley Common.

After a little under 2 hours in the park, I had a total of 59 contacts in the log.

After the activation I stopped off for a look at the old fuel tanks on the edge of town.  During the early stages of the Second World War, No. 12 Inland Aircraft Fuel Depot was established at Wolseley, with an initial capacity of 1.27 megalitres  in three tanks camouflaged to look like farm buildings. The depot started operations in 1942 and three additional tanks were added later.  It was disbanded on 14 June 1944

Early on Tuesday evening (29th March 2016), after booking in to my motel, I decided to head out to Mount Arapiles for an activation for both the Summits on the Air (SOTA) program and the World Wide Flora Fauna (WWFF) program.  The Mount Arapiles summit, VK3/ VW-022 is located within the Mount Arapiles-Tooan State Park VKFF-0765.

Above:- Map showing the location of Mount Arapiles in western Victoria.  Map courtesy of Forest Explorer.

The summit and park is just a short 25 km drive west of Horsham, out along the Wimmera Highway.  It is located about 10 km west of the little town of Natimuk, which is where my Nana spent her final years before passing away aged 96 years.

Above:- Map showing the location of Mount Arapiles in western Victoria, to the west of Natimuk.  Map courtesy of Forest Explorer.

Mount Arapiles summit is 369 metres above sea level and is worth just 1 SOTA point.  The summit has been activated a total of 11 times (including by myself back in September 2013).

The Mount Arapiles-Tooan State Park has been activated a total of 4 times.  The last time I activated the SOTA peak, the park was not part of the WWFF program, so this was to be a unique park activation for me.

Mount Arapiles, known as Djurite for the local Dhurid Balud aboriginal people, is one of Australia’s best rock climbing areas and rises very sharply from the Wimmera plains.  It is world renowned and has more than 2,000 developed routes on the many cliffs, crags and pinnacles.  The park, which is 7,475 hectares in size, was created in 1987.

The first recorded ascent of Mount Arapiles was on the 23rd day of July 1836, by Major Thomas Mitchell, who was the European who discovered the summit.  He named the summit after the Arapiles hills near Salamanca in Spain, where the Battle of Salamanca took place, and where Mitchell had seen action.

“This certainly was a remarkable portion of the earth’s surface, and rather resembled that of the moon as seen through a telescope.”

A total of 14% of Victoria’s flora species are represented in the park.  The Peregrine Falcon, which can reach speeds of up to 389 kmh, can be found at Mount Arapiles.

As I drove to west, it looked very gloomy and I could see some shower activity around Mount Arapiles.  Fortunately as I got closer, the rain band had moved away from the area of the summit/park.

The park is well sign posted off the Wimmera Highway, and a bitumised road leads to a carparking area at the top of the summit.

I parked the 4WD in the carpark and then lugged the gear up the flight of steps to the trig point (a distance of around 50 metres). 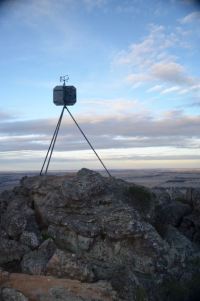 Once at the top I set up just to the north of the trig point and fire tower. 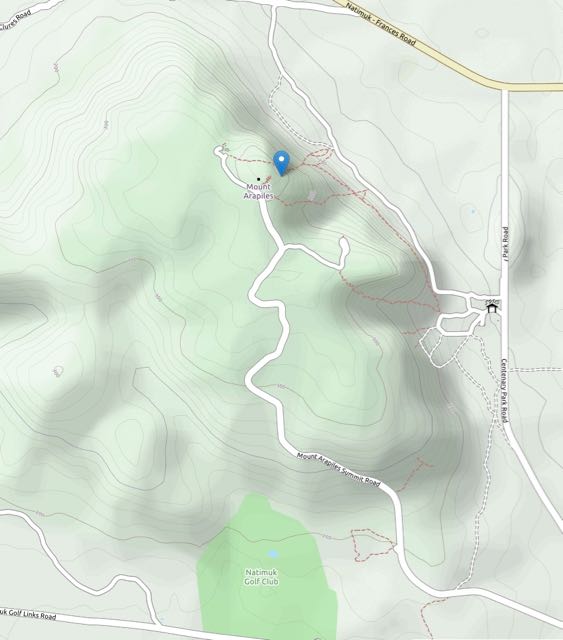 Above:- Map showing the road leading up to the summit.  Courtesy of OpenStreetMap.

After setting up I took the opportunity of taking some photographs prior to it getting dark.  There are terrific views in all directions from the top of the summit.

At 7.20 p.m. Victorian local time I commenced calling CQ on 7.090 and it wasn’t long for a mini pile up to commence.  The first caller of the activation was Peter VK3PF, followed by Brian VK3BBB, Col VK3LED, and then Mike VK5FVSV.  The 40m band was in excellent condition, with strong signals from all across Australia: VK1, VK2, VK3, VK4, VK5, and VK6.  I also received three calls from New Zealand: Andrew ZL3CC in Christchurch, Ken ZL4KD in Christchurch, and ZL3NF in Timaru.

I was thrown a bit by one call, and that was VK5/HF9ZZ.  It was Jack from Poland who is on holidays in South Australia.

I also managed a park to park contact with Rob VK4AAC/3 who was in the Echuca Regional Park VKFF-0966.  Sadly there were no summit to summit contacts to be had. 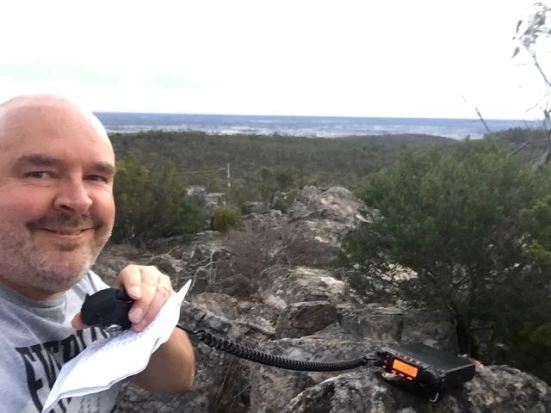 After 50 minutes on the summit/in the park, it was dark, and I had a total of 50 contacts in the log.  I had qualified the SOTA peak and also the park for both the VKFF and WWFF programs. 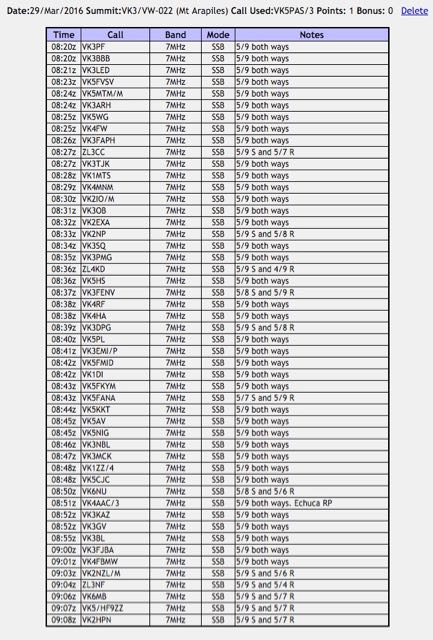