Well another Oceania DX Contest has been and gone.  This is one contest I always participate in as clearly its focus is on my part of the world, Oceania.  I have participated since 2011.  The Adelaide Hills Amateur Radio Society (AHARS) also sponsors two plaque in the contest, and that is extra motivation for taking part.  The plaques sponsored by AHARS are as follows: 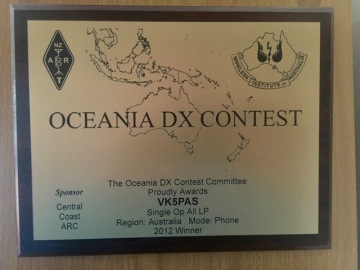 The object of the Oceania DX Contest is for Oceania stations to contact as many stations as possible both inside and outside of the Oceania region, whilst Non-Oceania stations are required to contact as many stations as possible inside the Oceania region.  Each QSO is credited points depending upon which band the contact was made and a multiplier applies in the award, which is the number of different valid prefixes worked.  The final score is the sum of the contact points multiplied by the Multiplier. 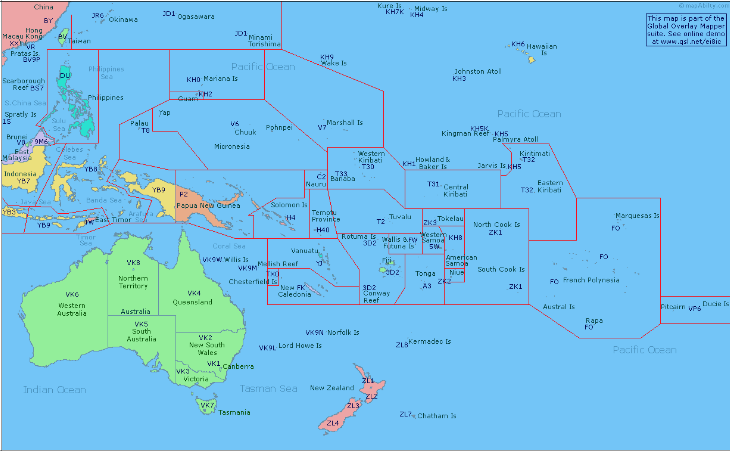 How does that stack up against previous years for me?

So I was well down on most of the previous years.

Sadly, propagation over the 24 hours was less than ideal.  There were some openings on 15m into Asia, but conditions on that band were well down for me compared to previous years.  Long path propagation to Europe was definitely down, compared to what it has been over the last couple of weeks.  Sadly for me I have a very average antenna on 40m, and my noise floor at home on 40m during the evenings is quite high.  So working DX on 40m is quite a challenge. 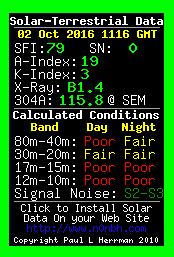 My equipment consisted of: 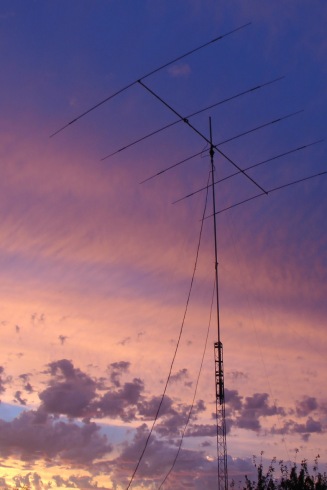 My 5 element yagi at home

The contest started yesterday (Saturday 1st October 2016) at 0800 UTC and concluded at 0800 UTC today (Sunday 2nd October 2016).  I did not make the contest an ‘over nighter’ and went to bed at around 10.00 p.m. local time (1230 UTC) on Saturday evening.  After a bit of a sleep in on Sunday morning, I headed back to shack and was on air again at around 8.45 a.m. local time (2315 UTC).  I took a number of breaks during the day as band conditions were poor, and I engaged in less enjoyable activities such as mowing the lawn and clearing emails.

The chart below shows my hours of activity during the contest. 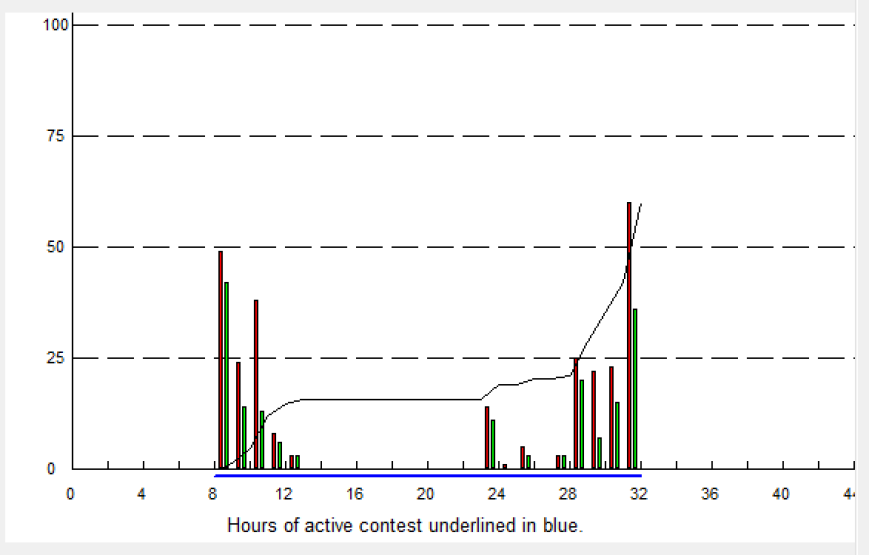 I started off on the 20m band on Saturday afternoon and worked a total of 51 stations in Europe, the Pacific, Japan, Norfolk Island, Thailand, Hong Kong, and Australia.  My first contact in the contest was with SQ1OD in Poland and this was followed by A35JP in Tonga in the Pacific.

When the 20m band had closed at around 0900 UTC I headed over to 15m where I worked just 2 JA stations.  I then moved to 40m where I worked a total of 70 stations in Australia, USA, Indonesia, Thailand, Lord Howe Island, New Zealand, Malaysia, and Norfolk Island.

So at the end of day one, Saturday, I had a total of 122 QSOs in the log.  It had been quite slow going.

On Sunday I started off on the 15m band where I worked a number of stations from Japan, Indonesia, Singapore, Thailand, and Russia.  It was then off to mow the lawns.

I returned back to the radio just before 0400 UTC and worked a further 27 stations on 15m from Indonesia, India, Philippines,  Australia, Brunei, Romania, Russia, Ukraine, Korea, and Hong Kong.

But I was finding band conditions a real struggle on 15m, so I occasionally headed over to 40m and 20m.  I found the 40m band was well down and was incredibly noisy, and found it a little hard to pull some of the VK callers out of the noise.  It was a bonus to log Ron VK3AFW/2 and Allen VK3AHR/2 who were on SOTA peak Granite Mountain VK2/ SW-015.

At around 0613 UTC I headed back to 20m and worked a handful of stations from Australia, Italy, Germany, Croatia, Japan, and New Zealand.  I then found a clear frequency and started calling CQ contest.  Things started off quite slowly but it wasn’t long before I had quite a large pile up from Europe and I logged a further 67 contacts.  Below is a short video of working the pile up.

Unfortunately the 20m band dropped out quite quickly, so for the last 10 minutes of the contest I called CQ on 40m where my first taker from my CQ call was EA5CTE in Spain.  For me, with my little antenna and 100 watts, I was very pleased.  A handful of callers followed from VK2, VK4 and New Zealand, leading up to the close of the contest at 0800 UTC.  My last contact was with VK2AHE.

Here is a breakdown of the bands I used during the contest:

So with 276 contacts in the log under some pretty trying band conditions, and intermittent time spent at the radio, I was quite pleased.  A few of the highlights for me included working the Quake Contesters team on Norfolk Island, as I had been on Norfolk myself back in May.

Also A35JP in Tonga, my good mate Marnix OP7M in Belgium amongst the pile up and EA5CTE on 40m after my first CQ call.

Here is hoping for better band conditions next year.

More information can be found on the Oceania DX Contest at…….