Today (Sunday 16th October 2016) was the inaugural VKFF Team Championship.   The idea of the Team Championship is to create a team of 2-4 people and head out into a park which qualifies for the World Wide Flora Fauna (WWFF) program, and make as many contacts as possible between 0000 UTC-0600 UTC.

I also wish to thank a number of sponsors who offered prizes and money towards the event.  They included:

The weather in Adelaide on Friday and Saturday had been nice and sunny, but sure enough, the cold front moved in on Saturday night, and by Sunday morning there were persistent showers.

Marija and I were aware that the weather was going to turn nasty, so we had chosen to activate Monarto Conservation Park (CP) VKFF-0828, as it is on the eastern side of the Mount Lofty Ranges (Adelaide Hills), and we suspected there might be less shower activity there.  Monarto CP is about 30 km east of our home QTH in the Adelaide Hills, and around 60 km east of Adelaide.

Above:- Map showing the location of the Monarto Conservation Park east of Adelaide.  Map courtesy of Protected Planet.

Monarto Conservation Park was established on 15th September 1983 and is 240 hectares in size.  Prior to being gazetted as a Conservation Park, Monarto was known as Braendler’s Scrub.  The consists of thick mallee woodland and dry heathland and is one of the few pieces of remnant Mallee vegetation close to Adelaide.  The park comprises sand ridges forming part of the Murray Plains.  The park is home to the endangered Mallee fowl, along with a variety of other wildlife including the Western Grey Kangaroo, and at least two species of Marsupial Mouse.  There are also numerous bat species.  More than 100 species of birds have been documented in the park.

Above:- Map showing the location of the park with respect to Murray Bridge, the Murray River, the Monarto Zoo, & the Ferries McDonald Conservation Park.  Map courtesy of Protected Planet.

The nearby ‘town’ of Monarto was once earmarked as a satellite city to Adelaide, by the then Premier, Don Dunstan, back in the 1970’s.  However for a variety of reasons this never eventuated.  Today Monarto is a farming district, and it is adjacent to the main Adelaide-Melbourne railway line.  You can easily see the silos at Monarto from the park.  Bi W also has a large distribution centre at Monarto.

I found the  promotional video below for the new city, dating back to the 1970’s.  It’s very interesting to watch to see what was planned.

The locality of Monarto was originally a private subdivision of section 210 of the Hundred of Monarto, from which it took its name, the hundred having been gazetted in 1847.  The name of the undred was after an aboriginal woman known as ‘Queen Monarto’ who lived in the area at the time of its proclomation.  The township was laid out in 1908. 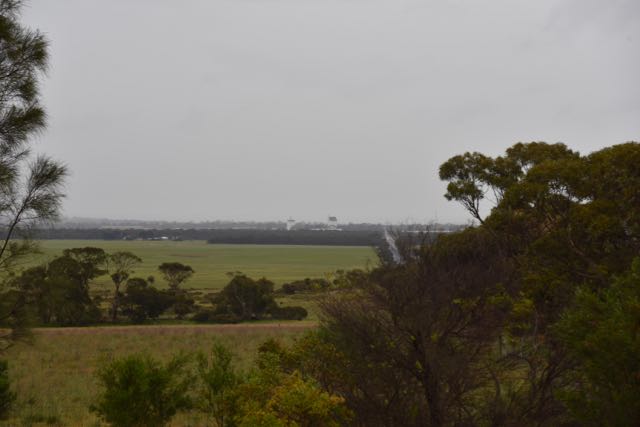 Above:- A view of Monarto from the northern side of the park.

The Monarto Zoological Park is located nearby and this comprised a 1,500 hectare (3,700 acre) open range zoo.  It is in fact the largest open plains zoo in the southern hemisphere and features a variety of animals including cheetah, rhinoceros, giraffe, chimpanzee, Meerkat, and Zebra.

We headed to our normal operating spot, the north eastern corner of the park, where this is a carpark.  As it was a wet and windy morning we positioned the Toyota Hi Lux so it was facing north-south with the awning facing the west, away from the incoming rain and wind.  For the activation we ran the Yaesu FT-857d, 10 watts, and a 40m/20m linked dipole (although we only used 40m). 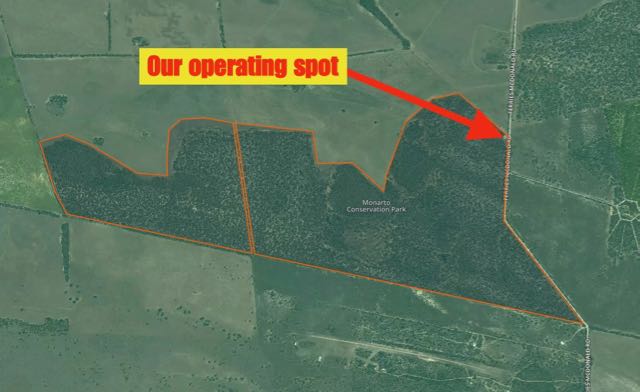 Above:- Aerial shot of the park showing our operating position in the north eastern corner of the park.  Image courtesy of Protected Planet.

This is the only access point to the park.  The southern, northern and western sides of the park adjoin cleared farming land.  Although there is no sign on the road advising you of the existence of the park, there is a park sign at the entry point.

The entrance to the park

Cleared farming land to the east of the park

The shack for the day

The weather at the start of the activation was terrible, and as a result we could not operate from outside of the vehicle.  The rain was just too constant and too heavy.  So the first hour was spent in the drivers seat of the Toyota Hi Lux, with the Yaesu FT-857d on the front passenger seat.

I started off the activation and logged 10 contacts, with the first QSO being with Steve VK5ZEO at the Mount Magnificent Conservation Park, VKFF-0916.  Steve was with Peter VK5PET and they were taking part in the Team Championship as Team Pezo.  My sixth contact was with VK3CUB, taking part in the Jamboree on the Air (JOTA), and I had a good chat with cubs, Byron and Ben.

After logging the first 10 QSOs, Marija then took control of the mic and Marija’s first contact was with Les VK5KLV who was operating portable in the Upper Spencer Gulf Marine Park VKFF-1757.  This was followed by Peter VK5KPR who was operating with Les as Team Special K’s.  Marija logged a total of 33 stations before we swapped ‘drivers’ again.

Marija’s contacts included 7 Park to Park contacts and one SOTA contact.  This included QSOs with Nick VK6FSEA/p and Jarrad VK6FFAR taking part in the championships as The Mad Mix in the Wellington National Park VKFF-0657, and Joe & Julie VK3SRC (VK3YSP & VK3FOWL) operating portable in the Churchill National Park VKFF-0621, as ‘The Odd Couple’.  Other portable contacts by Marija included Peter VK3YE who was operating from Chelsea Beach, Ian VK1DI/p at Bullen Range Nature Reserve VKFF-0984 and SOTA peak Bullen Range VK1/ AC-033, and Gerard VK2IO/p in the Tuggerah State Conservation Area VKFF-1383 (the first time this reference has been activated). 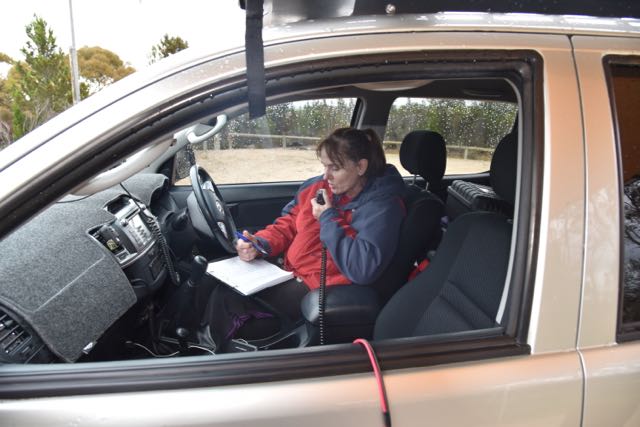 The showers cleared and this gave us some time to erect the awning and I then took over the mic.  First up was regular park hunter Dennis VK2HHA, followed by Steve VK3FSPG and then Nick VK3ANL.  I then logged Jonathan VK7JON and his partner Helen who were in the Narawntapu National Park VKFF-0005 taking part in the Team Championship as the ‘Tassie Devils’.  This was followed by a call from VK5SAG, with Patrick VK5MPJ at the mic.  I had a chat with Scout Sam, and his sister Rachael.

Next up was Neil VK4HNS/p who was in the Crows Nest National Park VKFF-0121.  Although not very strong (5/3), Neil was perfectly readable as there was no man made noise on the band in the park.  Half a dozen QSOs later I spoke with Les VK5KLV and Peter VK5KPR in the Upper Spencer Gulf Marine Park VKFF-1757.  Before handing over the mic to Marija I also logged Ian VK1DI who was in the Bullen Range Nature Reserve VKFF-0984 & on SOTA peak Bullen Range VK1/ AC-033.  I was also called by Mick VK3GGG/VK3PMG and Tony VK3XV operating as ‘Team Kookaburra‘ in the Ararat Hills Regional Park VKFF-0958.  And it was also great to be able to speak with Gerard VK2IO in the Tuggerah State Conservation Area VKFF-1383.  I had heard Gerard speak with Marija earlier and I had heard this was a unique park, so I was very pleased when Gerard called. 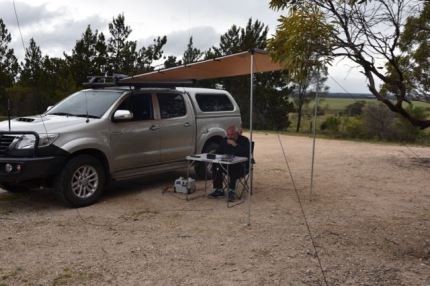 After logging a total of 29 contacts it was time to hand the mic back to Marija, whilst I took the opportunity of having a walk through the park.  Marija’s first caller was Andrew VK1AD in Canberra, followed by Mike VK2IF, Col VK3LED, and then Tony VK3XV in the Ararat Hills Regional Park VKFF-0958.  A few QSOs later Marija was called by Mick VK3GGG/VK3PMG who was with Tony in the Ararat Hills Regional Park.

Marija logged a total of 23 stations and this included Park to Park contacts with Jonathan and Helen VK7FOLK in the Narawntapu National Park VKFF-0005.

I have been to Monarto CP a number of times previously but I had never walked the trail through the park, so this was a great opportunity of doing so whilst Marija was on air. 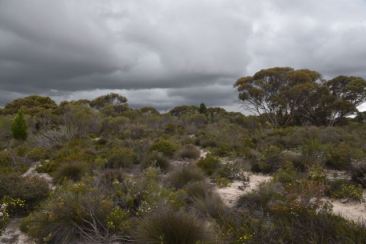 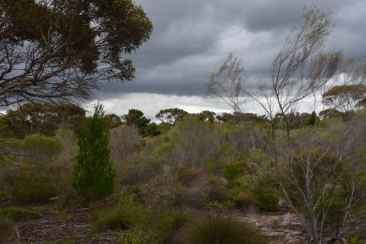 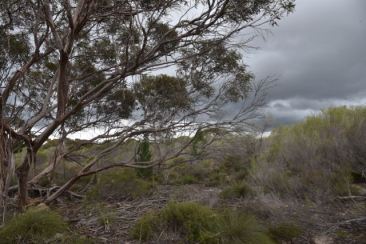 The park was alive with colour during our visit with many of the native plants in flower.

It was now 4.00 p.m. local time (0530 UTC) and we now had just 30 minutes left in the championship.  I jumped back on the mic and logged 7 stations from VK2 and VK3, with Marija finishing up the last 10 minutes with a further 4 stations logged from VK3 and VK4.

It was the conclusion of a fun but very wet day, with a total of 138 contacts in the log. This included 23 Park to Park contacts. Marija made 70 contacts and I made 68 contacts.  So despite band conditions being quite poor at times, we were very happy.

I worked the following stations  on 40m SSB:-