Yesterday (Sunday 15th January 2017) I headed down to the Encounter Marine Park VKFF-1707 with Chris VK5FR and David VK5KC and enjoyed a very relaxing afternoon on the beach nof far from the Murray Mouth.  This was the first time the park had been activated for the World Wide Flora Fauna (WWFF) program.

The park is located south of Adelaide and we decided to travel along the beach at Goolwa towards the Murray Mouth and operate from the beach.

Above:- The Encounter Marine Park stretches along the southern coast.  This map shows our operating spot in relation to Adelaide.  Map courtesy of Location SA Viewer.

It was quite a warm day with the expected top temperature being in the high 20’s, so it was an ideal day to be out and about.  Chris and David arrived at my home at around 10.00 a.m. and after packing the Toyota Hi Lux we headed south through the little town of Strathalbyn and on to Goolwa.  The drive took us through some beautiful countryside on the Fleurieu Peninsula and the wine growing region of Currency Creek.

Once we reached the town of Goolwa, we drove down Beach Road to the coastline.  We deflated the tyres a little on the Hi Lux and then drove down onto the beach and headed east towards the Murray Mouth.  As it was such a lovely day there was a lot of activity on the beach. 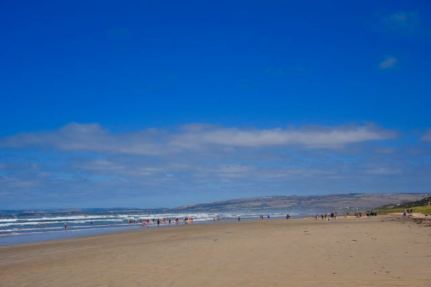 The Encounter Marine Park encompasses the waters off southern metropolitan Adelaide and the Fleurieu Peninsula.  It extends past the Murray Mouth to the Coorong coast.  At its western boundary, the park includes all waters of Backstairs Passage and the eastern shores of Kangaroo Island.  The park is 3,119 km2 in size and represents 12% of the marine park network in South Australia.

The park contains some of Australia’s best preserved ocean wilderness, including amazing dive sites and spectacular reefs which provide refuge for vitally important fish breeding and shelter areas.  Fishing is very popular within the park, along with diving, and surfing.  Leafy Sea Dragons are found in the park, along with Sea Lions, and Southern Right Whales. 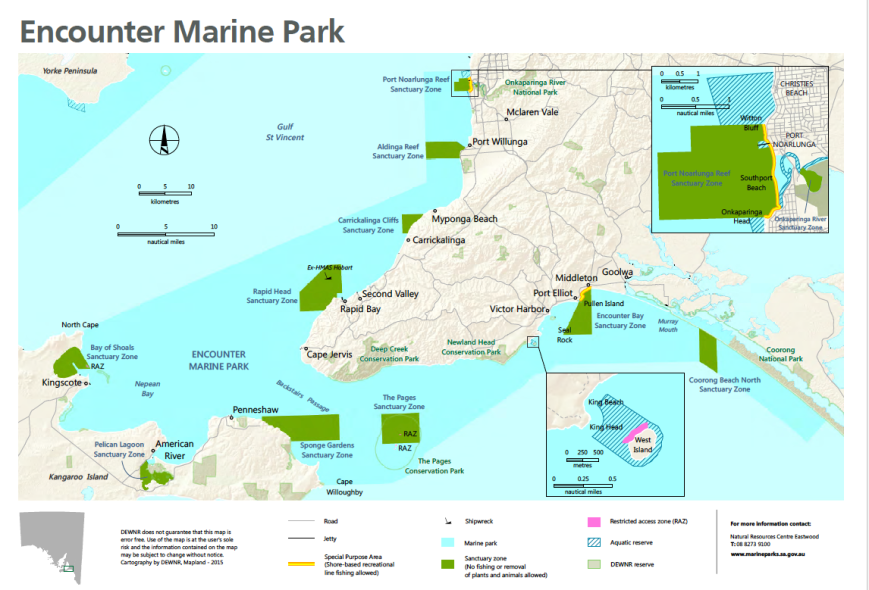 Above:- Map showing the location of the Encounter Marine Park.  Map courtesy of National Parks SA.

Below is a terrific video to give you a feel of what this spectacular part of South Australia offers.

We drove down along the beach to the Murray Mouth, where the mighty Murray River flows out into the Southern Ocean.  This is about 10 km south east of Goolwa.  It was very pleasing to see the mouth wide open, which it often is not.  But due to all of the recent rain upstream, it was flowing well out to sea.

The mouth of the Murray River is an opening in the coastal dune system  which separates the river system from the Southern Ocean and which extends from near in a south-easterly direction along the continental coastline for about 145 kilometres.  This is known as the Coorong, which is a National Park. 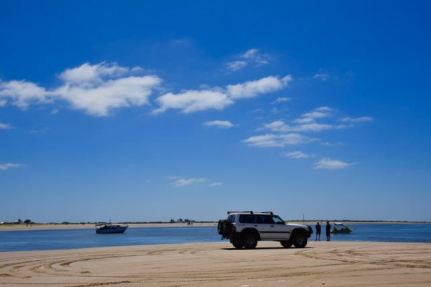 We found a spot a little away from the people undertaking various activities including fishing and swimming, and rolled out the awning on the side of the Hi Lux.  We erected the fold up table and deck chairs, and the 80/40/20m linked dipole on the 7m squid pole.  As it was a sunny day, the solar panels came out to top up the 44 amp hour power pack charging the radio.  We ran 40 watts output from the Yaesu FT-857d.

We were all set up and ready to go by around 0140 UTC (12.10 p.m. South Australian local time).  I jumped on the mic first and headed to 7.144 where we found Marc VK3OHM calling CQ from the Cobboboonee National Park VKFF-0728 in south western Victoria.  Marc had a strong 5/8 signal and reciprocated with a 5/8 for us.  Chris, David and I swapped the mic and logged the Park to Park contact with Marc.  It was a nice way to start our activation.

We then headed down to 7.139 and I started calling CQ.  Steve VK3FSPG/VK3MPR was the first responder to my CQ call, followed by Mick VK3GGG/VK3PMG, and then Tim VK3TJK.  Signals were down a little compared to normal which was not a good sign of things to come.

Ian VK1DI/2 then called us from the Majors Creek State Conservation Area VKFF-1346, and again we swapped the mic to log the Park to Park contact with Ian.

Sergio VK3SFG  was number 10 in the log for me, and I had qualified the park for the VKFF awards.  I jumped out of the ‘drivers seat’ and in went Chris VK5FR.

Chris also qualified the park for VKFF in quite quick time, and David VK5KC soon followed.  But it was very slow going from that time on, on 40m.  The band conditions seemed to be well down and the number of callers was much lower than usual.  We did log a splendid contact with Andrew VK1AD in Canberra who was running just 500 milliwatts.  Andrew was 5/2 to us and he gave us a 5/8 over to the ACT.  Personally there would be no way I could work Andrew on such QRP power from home, as the noise floor is too high.  But from the park, it was ‘armchair’ copy.

We also logged Gerard VK2IO who was operating portable from SOTA peak VK2/ CT-004 in the Central tablelands region of New South Wales.

We then headed over to 20m and Chris started calling CQ on 14.310.  This was answered by Steve VK3MEG who was a beautiful 5/9 from Melbourne.  This was followed by Geoff in Beechworth in north eastern Victoria who also had a nice signal, and then Andrew VK1AD running QRP again, this time 1 watt.  Andrew was peaking 5/7 with us, with some QSB on his signal.  Andrew gave us a 5/8 signal report on our 40 watts, so we lowered our power down to 5 watts and this resulted in a drop of around 3 S points for us.

Again Chris, David, and I swapped the mic on 20m, working into VK1, VK2, VK4, VK4, VK6, and VK8, whilst enjoying a bit of banter amongst the three of us between contacts.

The beach near the Murray Mouth 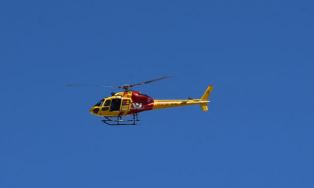 We moved back to 40m where we logged a number of further contacts, mostly on the eastern seaboard of Australia.  It was quite apparent that the close in propagation was not working at all on 40m, with only one VK5 logged and that was Greg VK5GJ at Meadows in the Adelaide Hills.

We logged a few more portable operators, and this included Gerard VK2IO who was portable on SOTA peak VK2/ CT-002 in the Kanangra-Boyd National Park VKFF-0256.  And also .  We alsoAngela VK7FAMP who was portable in the Notley Gorge State Reserve VKFF-1145.  Chris, David and I had all qualified the park, with in excess of 44 contacts each.

Prior to going QRT for the day we also tried 80m where we logged a handful of VK5 stations.  We also played a bit with my Chinese version of the Buddistick without any success.  We had major problems in bringing down the VSWR.  So any contacts on that antenna will have to wait for another day.

It was a great afternoon out in the Encounter Marine Park, but we were starting to get a little thirsty for a beer, so we packed up and made our way back down along the beach to Goolwa.

Above:- View looking east along Goolwa Beach, back down towards the Murray Mouth

We stopped off at the Corio Hotel in Goolwa for a couple of beers, and then drove on to Strathalbyn where we stopped for tea at the Victoria Hotel, before heading back to my home QTH at Mount Barker.

Below is a short 5 minute video of our activation…..