Yesterday afternoon/evening (Friday 17th March 2017) I activated the Wiljani Conservation Park 5CP-274 and VKFF-1159 for the regular Friday get-together for the VK5 National & Conservation Parks Award.  The park is located about 55 km north east of Adelaide and just a few km north of the little town of Mount Pleasant, on the southern edge of the world famous wine growing region of the Barossa Valley.

I have activated the park previously, back in April, 2016, and qualified it on that occasion for both the VK5 Parks Award and World Wide Flora Fauna (WWFF).

Wiljani Conservation Park was gazetted on the 25th February 2016, so it is a relatively new park.  Wiljani was a family group of the Peramangk aboriginal people whose traditional lands are primarily located in the Adelaide Hills.  The lands of the Tarrawatta and Yira-Ruka (Wiljani) extended to the east down as far as Mount Torrens and Mannum.

When I was last at the park there was a beautiful pine forest, part of Mount Crawford Forest, on the western side of the park.  On this visit however, the forest was no more.  It had been cleared and what was a beautiful forest was now a barren landscape.  There were logging trucks and other machinery busily loading pine logs.

Also on my first visit to Wiljani, there was no Conservation Park sign in existence.  This was still the case during this visit, with the old ‘Boundary Road Conservation Reserve’ sign at the south western corner of the park.

The only way into this park is via Elliotts Boundary Road which runs along the southern section of the park.   The gates near the south western corner of the park, leading into the now cleared forest, are normally locked.  On this occasion they were open due to the logging activities.  There is a small wire fence which runs along the western boundary of the forest and the park, so you could access the park from the western boundary by climbing the fence.

The old wire fence near the southern corner of the park has been brought down in parts.  This is alongside a metal gate with an old track on the other side of the fence.  The track appears to have been an old access track through the park, but is now grown over.  I carried my gear about 20 metres along the track and found a nice shady spot and set up my station: Yaeu FT-857d and the 20/40/80 m linked dipole, supported by the 7m telescopic squid pole.  I ran 40 watts output for this activation.   It was quite a warm afternoon, with the temperature being a beautiful 26 deg C.

Above:- Aerial shot showing my operating spot in the southern part of the Wiljani Conservation Park.  Image courtesy of Location SA Map Viewer.

After setting up I switched on the radio, which was already on 7.144, my nominated operating frequency.  The band was dead quiet, with no man made noise and virtually no static.  Absolutely beautiful conditions.  I asked if the frequency was in use, and Peter VK3PF responded to let me know that there was an OE station from Austria on the frequency.  Very soon after I heard OE11SO/p calling CQ for the Special Olympics.  He was a good 5/7 signal.

Peter and I QSYd down to 7.135 and logged each other.  This was followed by a number of the normal park hunter stalwarts, Les VK5KLV, then Gerard VK2IO, and then Mick VK3GGG/VK3PMG.  Contact number eight in the log was Rob VK4AAC/p who was activating the Eumundi Conservation Park VKFF-1538.  This was a first time activation of the park, and I was very happy to log Rob, Park to Park.

Despite the band conditions being very good, there were very few callers.  So I took the opportunity of heading back up to 7.144 where I tried to get through to OE11SO/p.  He had quite a large pile up from Europe, many of which I could not hear.  But to my pleasant surprise, he asked for stations outside of Europe.  I called a few times, but sadly my little signal was not able to be heard in Europe.

I returned back to 7.144 and called CQ and this was answered by David VK5PL who was operating portable in the Sandy Creek Conservation Park 5CP-204 and VKFF-0933.  David was very low down, but I was able to hear him well due to there being no man made noise on the band from Wiljani.  Callers continued to be very slow, with just a 2 further stations logged.

I decided to try my luck on the 80m band, as I had received an SMS from Ivan VK5HS in the Riverland region of South Australia, asking me to try that band as he was unable to hear me on 40m.  I called CQ on 3.610 and this was answered by Ivan who was a good 5/8 signal.  Unfortunately he was not hearing me as well, with my signal being 3/3 to Renmark.  Only one other contact was logged on 80m and that was with Michael VK5FMLO from the southern suburbs of Adelaide (5/8 both ways). 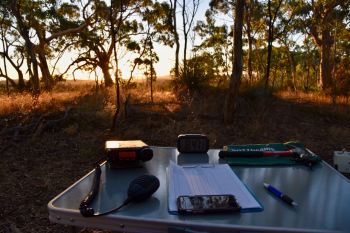 It was now just after 0630 UTC (5.00 p.m. local time) and I moved back to the 40m band.  The band was very busy with quite a few signals coming in from Europe.  I called CQ on 7.140 and this was answered by Greg VK5GJ at Meadows in the Adelaide Hills.  Greg was very low down, but as we both had very low noise floors, we were able to hear each other perfectly (5/1 both ways).  I was also called by Peter VK3TKK who was portable in the Organ Pipes National Park VKFF-0627, running just 2.5 watts.  Peter was a genuine 5/9 signal.  Fantastic signal Peter with QRP.

Unfortunately a ZL station came up on 7.138 and was very strong and was bleeding over, so I QSY’d to 7.144.  I there worked a further 8 stations from VK2, VK3, VK4 and New Zealand.  It was nice to log Oliver ZL1XS (formerly ZL1AAW), who often features in my portable log. It didn’t take long and I started to experience QRM from above on 7.146, and I then had Jeff GW3UZS start calling CQ on my frequency.  I tried getting back to Jeff, but sadly he was unable to hear me.  I took this as my opportunity of leaving 40m and QSYing to the 20m band hoping to get some DX in the log.

I had a great start on 20m with my first caller being Stepan RA4SAT in Russia, with a good 5/9 signal.  This was followed by Rob VK4AAC who was now back home after his park activation.  I then logged Mark VK4HDY and Phil VK6ADF, and I then had a run of European callers on the long path.  Countries worked were Slovak Republic, Ukraine, Belgium, Czech Republic, Finland, Italy, Spain, Austria, and Germany.  Signals were not great, but it was still very pleasing to be able to add some DX to the log.

It was now 0829 UTC (6.59 p.m. local time) and I decided to give 80m a go again.  Roald VK1MTS was the first station logged this time with a nice 5/8 signal from the Australian Capital Territory.  This was followed by Mike VK5FMWW/VK5FVSV, and then Hans VK5YX in the southern suburbs of Adelaide with a huge signal.  I logged a total of 16 stations on 80m from VK2, VK3, VK4, and VK5.  Conditions were very good on 80m.

One of the stations spoken to on 80m was Chris VK2SR, who suggested when I finished on 80 I should come up to 40m and join him with a regular sked he has with a group of USA stations.  Which is exactly what I did, logging Stan W4KR in South Carolina, and Joe W5JI Florida.  I have very fond memories when I was a teenager and was involved in Short Wave Listening, of listening to Joe when he was K5THB back in the early 1980’s.  Joe was often heard chatting to other USA stations and VK’s, including W4MIP and W2GO.  I still have my original SWL logs and the QSL cards from back in those days.  So it was a real pleasure to be able to speak with Joe.

The sun was now starting to disappear behind the hills, and I sat back in the deck chair for a while to enjoy the spectacular sunset. 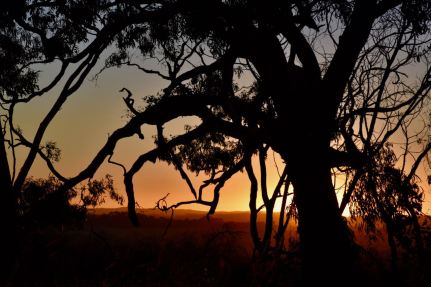 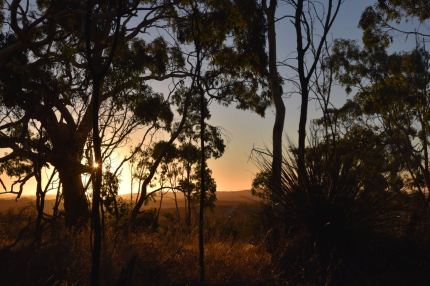 I booked in to the 7130 DX Net where I logged 5 stations.  This included Bill W1OW in Massachusetts in the USA, Ed NT2X in Brooklyn New York in the USA, Brian ZL2ASH in Wellington New Zealand, John VK6VZZ mobile, Peter VK7PRN, Ron VK3MRH, Andy VK4TH, William FO5JV in French Polynesia, and finally Chuck K9RM in Indianna USA.

Time was marching on, and now that it was completely dark, the temperature had dropped to a chilly 11 deg C.  I was also feeling very hungry.  So I QSY’d up the band where I logged my lovely wife Marija VK5FMAZ.  A little bit of a challenge, but we made it. I put out some last CQ calls on 7.135 and logged just 3 further stations.

I decided to have a quick tune around the band before going QRT and I’m pleased I did.  I found T2AQ  from Tuvalu calling CQ on 7.190, working split.  To my surprise, he had no callers, and I was very pleased when he came back to my first call.  This was anew DXCC entity for me whilst operating portable. 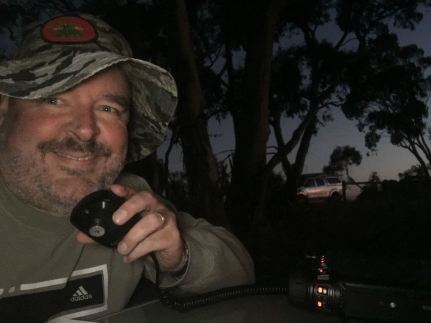 This was a very enjoyable activation, with a total of 99 stations worked.  It was pleasing to be able to log some European DX on the 20m band, and also to work some DX on 40m, including a new country, Tuvalu.