Today (Sunday 1st October 2017) my wife Marija VK5FMAZ/p and I packed the Toyota Hi Lux and headed towards the southern Barossa Valley with a view to activating the Sandy Creek Conservation Park 5CP-204 & VKFF-0933.

This was to be a new park for Marija for the World Wide Flora and Fauna (WWFF) program, and also the VK5 National & Conservation  Parks Award.

The Sandy Creek Conservation Park is 158 hectares in size and is situated between the towns of Sandy Creek and Lyndoch in the southern Barossa Valley, the world famous wine growing region.  Section 72 Hundred of Barossa was proclaimed as a Wildlife-Reserve on the 7th October 1965.  Sections 317 and 319 were added on 25th May 1967 as a National Park.   It was re-proclaimed as Sandy Creek Conservation Park on 27th April 1972.   On 11th April 1991, Allotment 10 was added, with Allotment 50 also added on the 8th September 1994 and Allotment 202 on 19th January 2006. 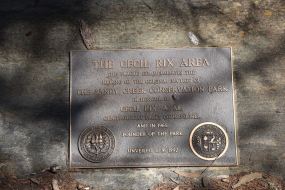 The following habitats can be found within the park: 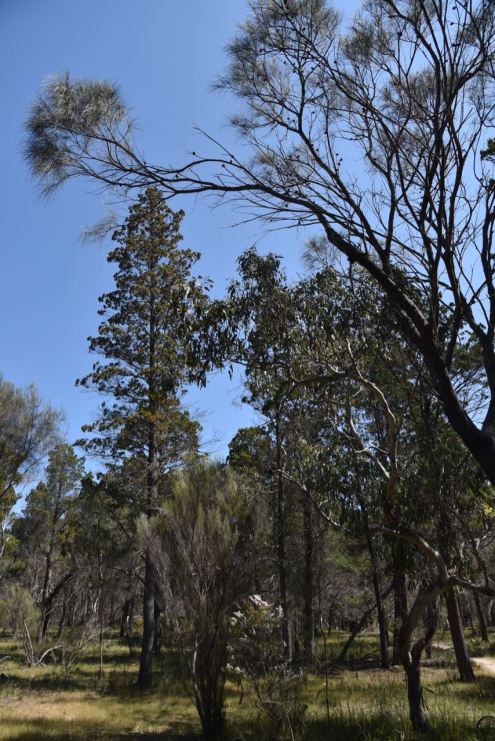 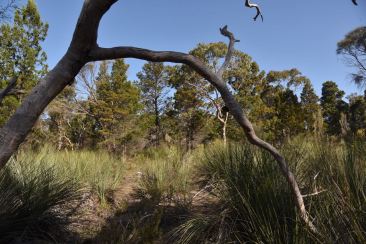 The park is one of the few remaining tracts of undisturbed and undeveloped native bushland in the Barossa Valley.  It is surrounded by cleared land for farming purposes and vineyards.  A quarry is also located on the eastern side of the park.

Above:- Cleared farming land on the northern side of the park.

During the first half of the 1900’s much of the Sandy Creek Conservation Park was cleared and planted with vines.  The vineyards were subsequently abandoned due to low soil fertility.  Sections of the park were named after life-long ornithologists and conservationists, Cecil Rix and Mark Bonnin who identified many native bird species in the area.  The Sir Keith Wilson section of the park was a gift from the Wilson family and the Nature Foundation of SA Inc.

Today, regenerating cleared land and the ruins of a small hut, built in 1918 from locally quarried stone and native pine, remain in the park.  In addition, an abandoned vineyard in the southern section contains grasses that provide important habitat for birds such as the grass-dwelling stubble quail.

During our visit to the park a number of the native plants were in flower. 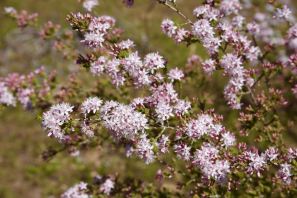 The park is home to a number of native animals including Western Grey kangaroos and Short beaked echidnas.  The Eastern Bearded dragon and Marbled Gecko can be found in the park.

For more information on the park, check out the website of the Friends of Sandy Creek Conservation Park, which can be found at….

The park is located a few km from the little town of Sandy Creek which has a population of around 450.  The Sandy Creek Hotel, which was opened in 1867, is best known for the prodigious amounts of alcohol served during World War II to the US soldiers who had a camp close by.  It is believed the pub still holds the South Australian record for the greatest amount of beer served in a single week.   This was set, unsurprisingly, after the announcement of the ceasefire at the end of World War II.

McLeod’s Daughters, an Australian soap opera, was filmed locally and much of the filming was done on location using the local farms and dirt roads as background.

Prior to heading to the park, Marija and I headed to the Birdwood/Cromer area and met up with Chris VK5FR.  Chris is cycling the entire length of the Mawson Trail, which stretches some 900km through the Adelaide Hills and on to the Flinders Ranges.  We tracked Chris’ progress on his GPS tracker and met him on Black Snake Road.  Chris offloaded his amateur radio gear to us, along with his drone.  Chris decided that he was going to concentrate on completing the Trail and the ham gear was a little too heavy to continue to carry.  We both wish Chris all the very best and will be providing further assistance to Chris if and when required.

You can track the progress of Chris via the following (the password is vk5fr)…….

After meeting up with Chris, Marija and I then travelled to Lyndoch and into the beautiful winegrowing region of the Barossa Valley.  We then travelled along the Barossa Valley Way towards the town of Sandy Creek and then turned down Conservation Park Road and into the northern section of the park.  We set up in the Cecil Rix section of the park.  As it was a warm sunny day we seeked out the shade of some trees.

Above:- Map of the park showing our operating spot in the northern section.  Map courtesy of Location SA Map Viewer.

As I had been to the park previously and had qualified the park, Marija kicked off the activation.  We headed to 7.144 and found Mark VK4SMA there, calling CQ from the Mount Perry Conservation Park VKFF-1609.  Mark’s signal was quite low down, but as we had no man made noise on the band from either park, we were able to work each other very comfortably.  I would not have been able to work Mark from home due to my noise floor.  It was a nice way to start the activation, with a Park to Park for each of us in the log.

Marija then went down to 7.139 and called CQ.  This was answered by Geoff VK3SQ, followed by Brendon VK7VIP and then John VK4TJ.  Marija soon had contact number 10 in the log, thus qualifying the park for the VKFF program which requires to contacts for the park to be qualified.  Contact number 10 was with Steve VK3FSPG.

Conditions on the 40m band were average, with quite a bit of fading (QSB) noted on signals from Victoria (VK3).  There were also long periods of calling CQ with no takers.  Marija soldiered on and logged 14 stations on 7.139, including another Park to Park, this time with Peter VK3PF/p, who was in the Sweetwater Creek Nature Conservation Reserve VKFF-2200.  I also logged Peter, Park to Park. 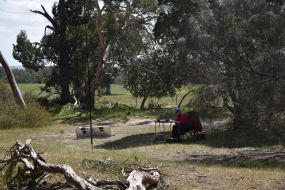 I then jumped into the ‘driver’s seat’ and called CQ, with Michael VK3MDH mobile coming back to my call, followed by Michael VK3MHY and then Marc VK3OHM.  I logged 14 stations before callers slowed down, which gave Marija and I the opportunity of tuning across the band to see if we could find some more park activators.  We did, hearing Rob VK4AAC/p calling CQ on 7.150 from the Samford Conservation Park VKFF-1639.  Again, Rob’s signal was very low and we were experiencing some QRM from some New Zealand (ZL) stations on the same frequency, but we comfortably made it.

I then headed back to 7.139 where I logged a further 7 stations whilst Marija had her lunch and also chatted with some bushwalkers in the park, explaining the hobby of amateur radio to them. 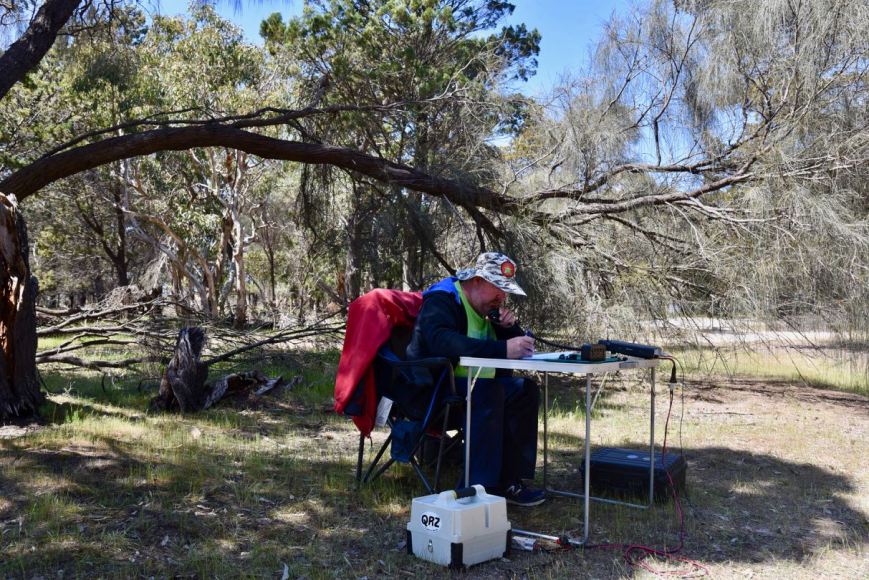 I then took a break for lunch, whilst Marija called CQ on 3.615 on the 80m band.  Marija’s first contact on 80m was a Park to Park contact with Peter VK3PF/p in the Sweetwater Creek Nature Conservation Reserve VKFF-2200.  This was followed by contacts with Ivan VK5HS in the Riverland, Stuart VK5STU in the norther eastern suburbs of Adelaide, Adrian VK5FANA on the Yorke Peninsula, and Tony VK5MRT at Strathalbyn south east of Adelaide.

Marija then went back to 40m and called CQ on 7.144 which was answered by Peter VK3ZPF, followed by Mike VK3KMH and then Rick VK4RF/VK4HA, whilst I took a bit of a walk through the park.  Marija logged a total of 29 stations on 7.144 from VK2, VK3, VK4, and VK7.  This also included a few more Park to Park contacts.  The first being with Norm VK3XCI/2 who was in the Warrumbungle National Park VKFF-0520.  Then Nick VK3ANL/p who was in the Greswell Hill Nature Conservation Reserve VKFF-2104.  Then Wolfgang who was in the Blue Mountains National Park VKFF-0041 and finally Peter VK3PF/p who had moved parks and was now in the Bull Beef Creek Nature Conservation Reserve VKFF-2055.

Above:- the moon was out in the beautiful sunny blue sky above Sandy Creek

Marija had successsfully qualified the park for the WWFF global program with a total of 50 stations in her log.  Contact number 44 was with Mike VK3ZMD.

I quickly jumped back on to 40m and logged a handful of stations, before heading to 14.310 on the 20m band.  Anthony VK6MAC was first in the log there, followed by Bill VK4FW and then Brendon VK4MAC.  I was then called by a Ukrainian station, but sadly it was an unsuccessful contact.  But then much to my surprise I was called by Rod YJ8RN/p on Loh Island, Vanuatu in the Pacific.  It was great to log Rod who is a former South Australian.

To complete the activation we erected the 15m dipole and I called CQ on 21.250 for about 10 minutes with no callers, despite self spotting on parksnpeaks.

Marija and I packed up and then went for a short walk through the park, enjoying the afternoon sun and the many kangaroos that call the park home.

Together, Marija and I made a total of 81 QSOs including 12 Park to Park contacts.

We also enjoyed a number of good conversations with bushwalkers during this activation, explaining to them the hobby of amateur radio and the parks programs.  Park activating is often a great way of interacting with the public and an opportunity to promote the hobby. 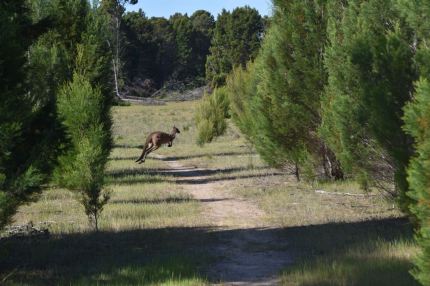