Today (Thursday 2nd November 2017) I decided to head out into the field to try out my brand new Yaesu FT-857d which I had delivered yesterday.  My original FT-857d which has racked up thousands of QSOs out in the field, gave up and died during an activation last Friday.  So I wanted to give the new rig a run before our planned trip to Victoria and New South Wales.  I also had acquired this week a Yaesu FT-897 from a deceased estate auction through my local radio club, so I wanted to give that a whirl as well.

I chose to activate Scott Creek Conservation Park 5CP-207 & VKFF-0788 as it is close to home.  On the way to the park I phoned my good mate John VK5BJE a call to see if he wanted to accompany me on the activation, as he lives very close to the park.  John agreed, and we made arrangements to meet at the park.

The park is located in the Mount Lofty Ranges ‘Adelaide Hills’, about 20 km south east of the city of Adelaide.

Above:- Map showing the location of the Scott Creek Conservation Park in the Adelaide Hills.  Map courtesy of Location SA Map Viewer.

The Scott Creek Conservation Park is about 712 hectares in size and was contains some of the most diverse areas of native vegetation in the Adelaide Hills.  The park features sloped valleys, lush creeklines and rounded ridgetops.  The Mount Bold Reservoir is located adjacent to the southern and south eastern boundary of the park. 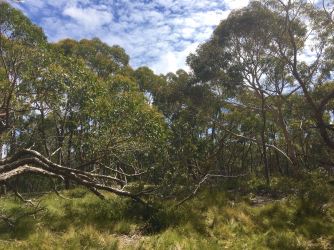 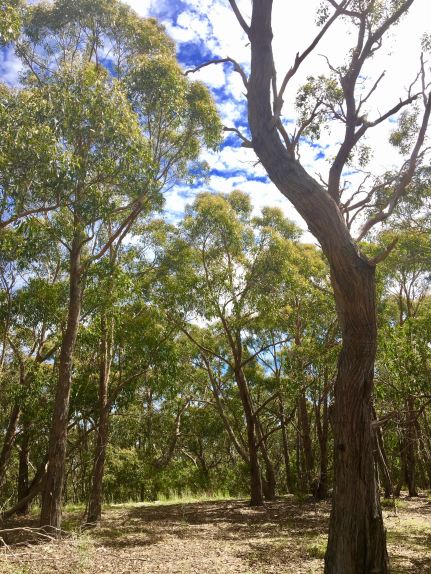 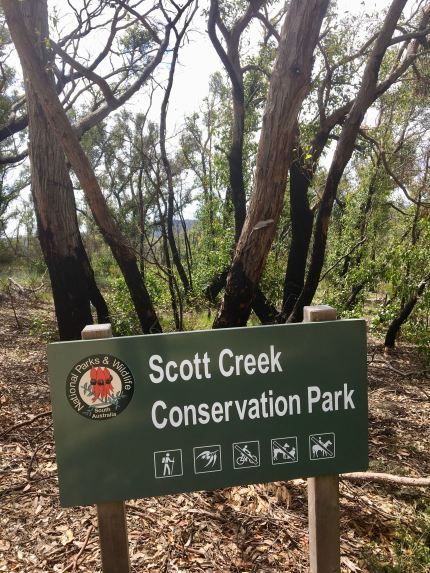 The park was established on the 7th day of November 1985.  The land which is now the park was formerly Peramangk Aboriginal territory.  European settlers first arrived in the late 1830s.  The Mackereth and Hill families cut timber from the land for use in building the city of Adelaide.  Mackareth cottage can be found just outside of the park.  The cottage dates back to 1839/1840, just 3-4 years after the proclamation of South Australia.   For many years the cottage housed a museum and on occasions provided Devonshire teas on weekend openings to visitors.  In 1984 the National Trust relinquished its interests and the cottage was closed.  It has since fallen into the disgraceful condition it is in today, covered in grafitti.  The cottage is located on SA Water land, who I contacted a number of years ago about the state of disrepair the cottage was in.  They seemed totally disinterested.  The South Australian State Government and SA Water should hang their head in shame.

Above:- Mackareth cottage in its glory (left), and what the cottage now looks like (right).

In about 1847 a Mr Scott brought his flock of sheep to the area and pitched a camp, near the bottom of the creek, Scott Creek, where it empties into the Onkaparinga River.  The people of nearby Cherry Gardens would refer to that locality as Scott’s Bottom, and the stream as Scott’s Creek.  Thus the name for the area.

In 1850, the wheel of a dray wagon broke off pieces of rock which contained copper. Subsequent years saw the area mined for copper and eventually silver.  At one stage about 235 claims were pegged along Scott Creek.  The Almanda Silver Mining Association was formed in 1868 and by the time production was stopped in 1887, the mine had produced 10,000 ounces (310kg) of silver. 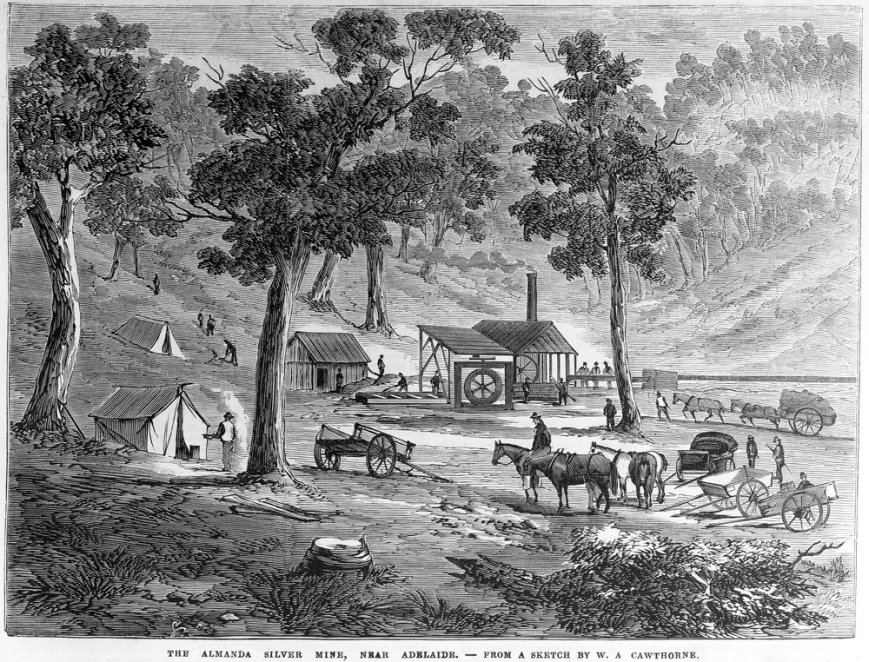 The land which is now Scott Creek Conservation Park was privately owned until the early 1970s when land was purchased by the South Australian State Government, with the conservation park being officially declared in 1985.

Over 125 species of native bird have been recorded in the park includingCommon Bronzewing, Laughing Kookaburra, Striated Thornbill, White-browed Scrubwren, Superb Fairywren, New Holland Honeyeater,Eurasian Coot, Australian Owlet-nightjar, Shining Bronze Cuckoo, Black-shouldered Kite, Chestnut-rumped Heathwren, Weebill, & Jacky Winter.  During our visit to the park John and I had numerous Red Breasted Robins dancing around where we were operating.  Sadly, I left my camera at home, so I could not get any good bird shots.  All photos were taken on my i-phone.

Numerous native marsupials call the park home including the Southern Brown Bandicoot, the Western Grey Kangaroo, the Koala, the Yellow Footed Antechinus, the Common Ringtail Possum, and the Common Brushtail Possum.  For more information on the fauna of Scott Creek, please have a look at…..

The park has an excellent Friends Group, and more information can be found at….

I had just arrived at the park at gate 8 at the start of Cup Gum Track, and was starting to unload the vehicle when John also arrived.  We walked a short distance into the park and set up in the shade of some trees, as it was quite a warm afternoon.

We headed to 7.144 and heard Dennis VK2HHA talking with Ron VK3MRH.  We gave them both a call and logged them and then heard Marcus VK2SK come up on the frequency and heard him go back to Gerard VK2JNG who was in a park.  Sadly we were unable to hear Gerard’s signal and we were a little confused at what was going on on the frequency, so we QSYd down to 7.139 where we continued our conversation/s with Dennis and Ron.  Bu then Mick VK3GGG came up to let us know that the other Gerard, Gerard VK2IO was on 7.140 and was in a park.  Again we were unable to hear VK2IO at all, so we QSY’d again, down to 7.135.

John and I swapped the mic, logging stations, using the brand new shiny Yaesu FT-857d.  We were very keen on receiving audio reports and had a number of very useful comments.  All appeared good.  Signals appeared a little down compared to normal, but we still managed QSOs into VK1, VK2, VK3, VK5 and VK7.  This included a Park to Park contact with Gerard VK2IO/p who was activating the Wallumatta Nature Reserve VKFF-2012.  We were a little surprised when Gerard called in, as just 30 minutes earlier we were unable to hear him.   John and I logged a total of 15 stations before deciding to try out the Yaesu FT-897.

John and I again swapped the mic, logging a steady flow of callers from VK2, VK3, and VK5.  We then tuned across the band and logged another Park to Park, this time with Gerard VK2JNG/p who was in the Richmond Range National Park VKFF-0431.  Gerard had also been unreadable an hour earlier, but his signal had now come up to a good 5/3, with Gerard running just 15 watts.

We then headed to the 80m band and started calling CQ on 3.610.  This was answered by Barry VK5BW who had followed us down from 40m.  Barry was roaring in at 5/9 plus from Bridgewater in the Adelaide Hills.  This was followed by Greg VK5GJ who was also strong, and finally Adrian VK5FANA on the Yorke Peninsula.  Sadly, despite the 80m band being open across VK5, and Barry putting out a call for us on the local repeater, Barry, Greg and Adrian were our only callers on 80m.

We then moved to the 20m band and called CQ on 14.310 which was answered by Cliff VK2NP, with a strong 5/8 signal, followed by Colin VK4PDX who was 5/9 and then Gerard VK2IO/p in the Wallumatta Nature Reserve VKFF-2012.  It was terrific to get another Park to Park with Gerard on another band.  This was followed by another Park to Park on 20m, this time with Gerard VK2JNG/p in the Richmond Range National Park VKFF-0431.  We logged a further 4 stations and then booked in to the ANZA DX Net on 14.182.  Conditions there were quite good, and we logged 6 stations each, including Maurice FK8HZ in New Caledonia, Mike YJ0MB in Vanuatu, and Jim E51JD in the Cook Islands.

To complete the activation we moved back to 40m where we logged a further 12 stations from VK2, VK3, VK4, and VK5, including a Park to Park QSO with Peter VK3HSB/p in the Alpine National Park VKFF-0619.

Above:- John VK5BJE on the mic.

We packed up and both headed home, with a total of 102 stations in the log between us, including some nice Pacific DX contacts on 20m, and five Park to Park contacts.