Marija and I only one had one planned park activation for day seven (Friday 10th November 2017), that being the Point Hicks Marine National Park VKFF-0953, which is located about 490 km (by road) east of Melbourne.  So we had a little bit of a sleep in and after breakfast in the motel room at Orbost we hit the road.  It was a little sad to leave Orbost as it is a beautiful little town, and the accomodation at the Orbost Motel had certainly been very impressive.  Our next three nights were to be spent at Cann River.

Our first stop of the morning was the visitor centre in Orbost.  We wanted to check to make sure we hadn’t missed any of the attractions in the town.  And also to have a look at the old settlers slab hut which contains the visitor centre.  The hut was built in 1872 by John Moore, a Scottish settler, with the assistance of his neighbours Harry Dargan and the McCole brothers.  The hut was wire together, with no nails being used in the structure.  In 1966 the hut was dedicated to the Orbost Historical Society.  In 1970 the hut was removed and stored.  In 1984, the current side was made available and the hut was rebuilt. 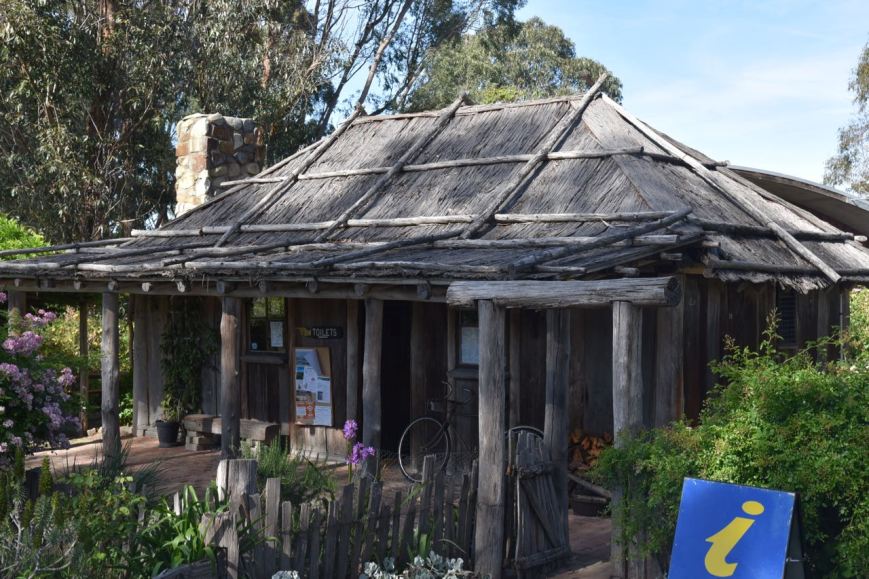 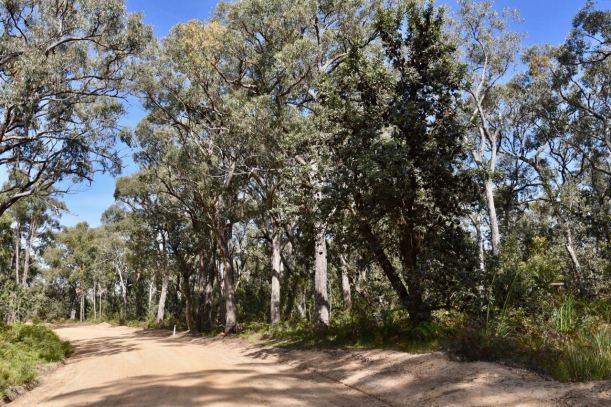 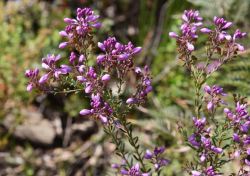 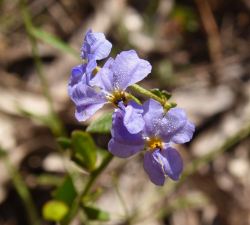 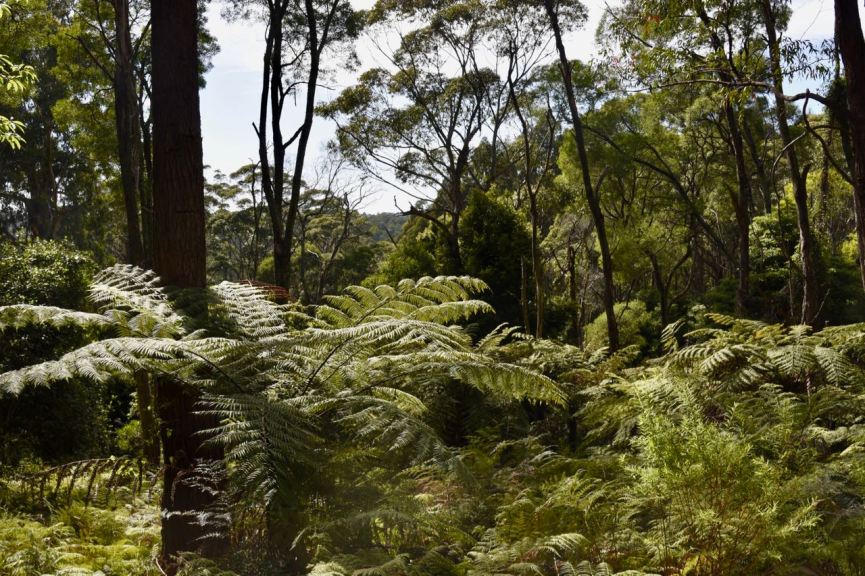 The forest drive includes the Little Cabbage Tree Falls.  There is a short, very enjoyable, 800 metre walk to the falls from the picnic area.  It is well worth a look. 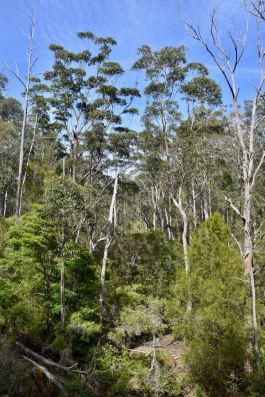 We also stopped to have a walk along the Falls Creek Memorial Trail which is dedicated to Peter Geary, a young forester who tragically lost his life.  The walk takes you through Stringybark Forest and fern gullies, to the waterfalls on Falls Creek. 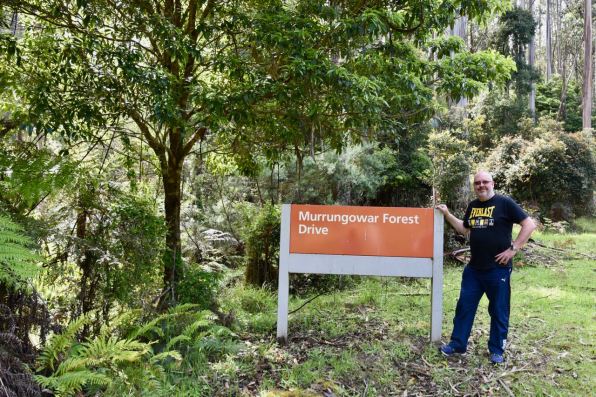 The drive not only takes you through spectacular countryside, but also through land which has been logged.  It is certainly a stark and barren countryside compared to the lush forest, once the vegetation has been cleared. 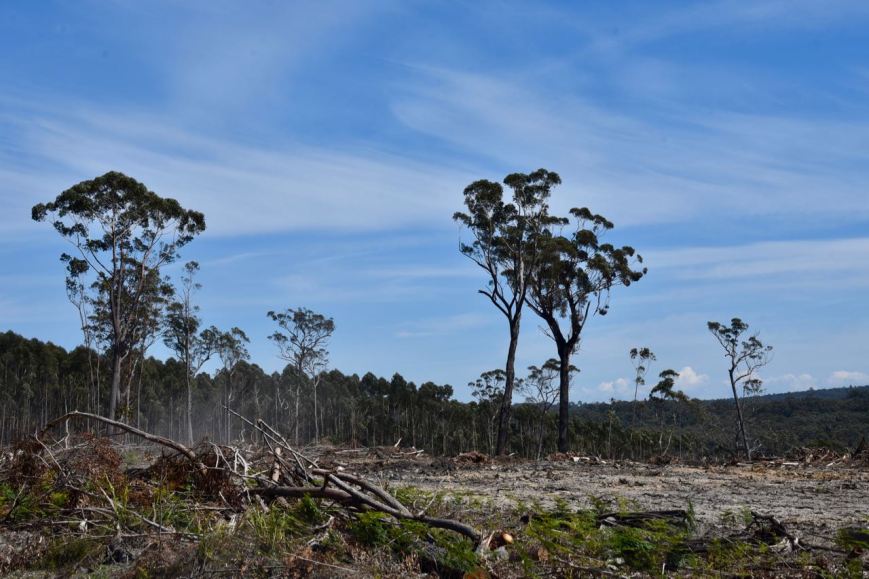 We then decided to detour off the Highway down to Bemm River, a small township which is surrounded by Sydenham Inlet and State Forest.  The area is renowned for its bream fishing, giving the town its second name, ‘The Bream Capital’.  There were certainly a lot of people out fishing during our visit to the little town.  This is a place which we will have to return to.  The little hotel looked very inviting. 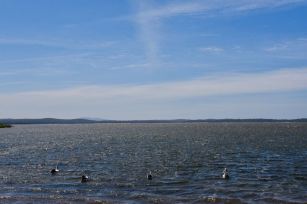 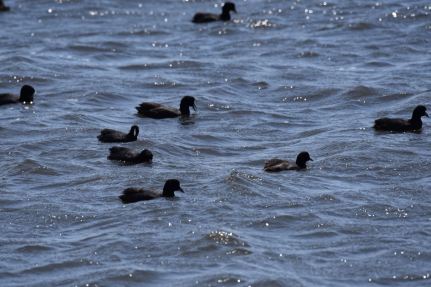 The Bemm River is formed by the confluence of the Errinundra and Combienbar rivers, and rises below near Boulder Flat, northwest of the town of Cann River. The river descends 165 metres over its 58 kilometres course.  The name of the river is derived from the Aboriginal words binn or birn of the Gunai people, meaning “fish hawk”.

Whilst at Bemm River Marija and I worked Tony VK3XV/p from the mobile.  Tony was activating the Great Otway National Park VKFF-0066.  Although low down, at 5/3, Tony was very workable.

We then drove back to the Princes Highway and our next stop was the McKenzie River Rainforest Walk, about 45 km east of Orbost and around 30 km west of Cann River.  There is a picnic area here, and a very enjoyable 1 km loop walk on sealed pathways, boardwalks and swing bridges through the rainforest.  The McKenzie River is a perennial river of the Bemm River. 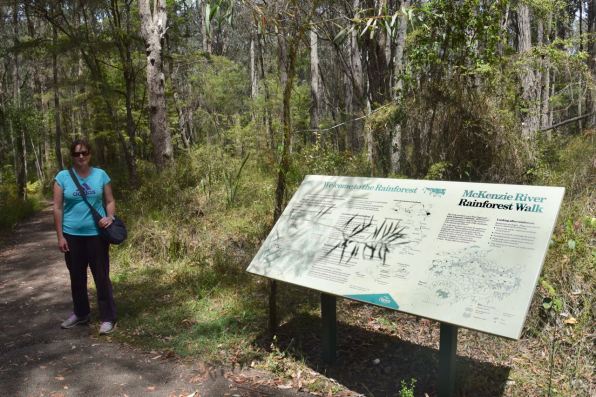 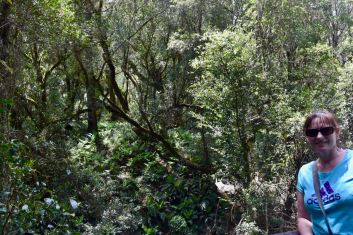 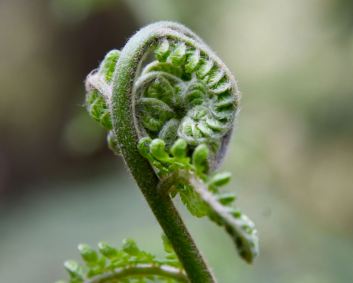 We then continued east along the Princes Highway, passing the Lind National Park, which we planned to activate on Sunday as part of the Keith Roget Memorial National Parks Award Weekend.  We then reached Cann River and picked up our key for the motel room, situated right next door to the Cann River Hotel (very convenient).

Cann River is a little town located on the Cann River at the junction of the Princes Highway and the Monaro Highway.  It has a population of a few hundred people and contains a hotel, a couple of motels, a bakery, a small supermarket, and some cafes.

Cann River’s history dates back to around 1879 when the Morgan family took up the Cann River Station.  By 1890, the Cann River Post Office had opened, on the Morgan property.  By 1921 there were 163 people living in the district and by 1938 Cann River comprised a Post and Telegraph Office, police station, school, church, hotel, boarding house and garage.

We then headed south out of Cann River on the Tamboon Road, heading to Point Hicks.  This is a dirt road, but is in good condition.  It is very windy and passes through some spectacular country.  It wasn’t long before we had reached the Croajinolong National Park, another park which we planned to activate over the weekend.

As we approached the coastline we crossed over the Thurra River which rises below Mealing Hill in remote country northeast of Cann River and flows over a 71 km course before reaching its mouth with Bass Strait, east of Point Hicks.

We then followed the Point Hicks Road, through the Thurra River campground.  The road follows the coastline and Honeymoon Bay. 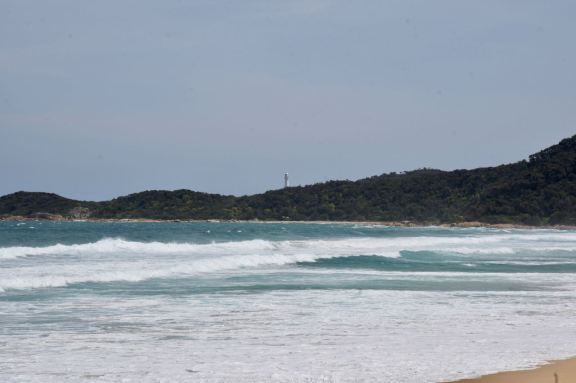 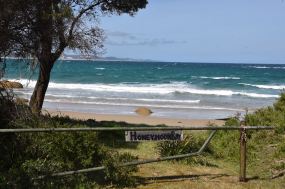 The Point Hicks lighthouse soon came into view in the distance.  The lighthouse was built between 1887 to 1888, and commenced operation in 1890.  The lighthouse is 37 metres (121 feet) tall, making it the tallest lighthouse on the Australian mainland.  It is 56 metres above sea level. 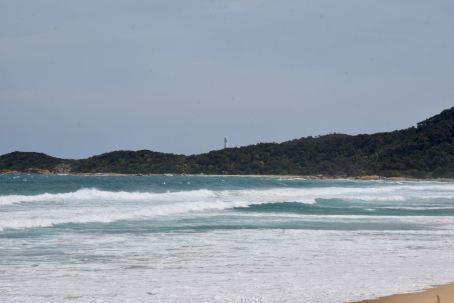 Point Hicks is a place of immense historic importance as it was the first point on the east coast of Australia where Europeans sighted land.  As such it can be seen as the beginning of modern European society in Australia.  Captain Cook first sighted Point Hicks in 1770.  In his journal on the Endeavour he described the landscape thus:

“With the first daylight this morn the land was seen, it made in sloping hill covered in part with trees and bushes, but interspersed with large tracts of sand… I have named it Point Hicks because Lieutenant (Zachariah) Hicks was the first to discover this land…”. 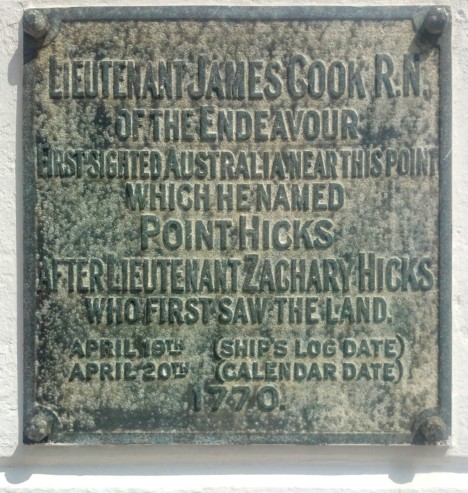 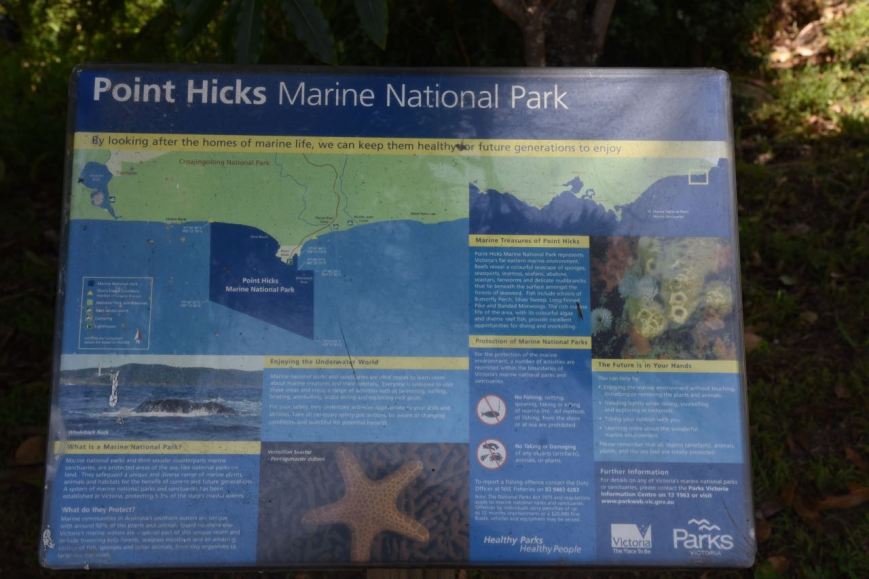 The reefs in the Marine National Park are among Victoria’s most interesting and beautiful.  I quote from the Point Hicks Visitor Guide:-

“Diving around Whaleback Rock or Sensation Reef is a truly amazing experience. The water is often very clear with sunlight glinting off schools of silver fish. As you drift down you feel dwarfed by massive granite boulders. A forest of gently swaying brown seaweeds covers the seafloor. If you move the seaweed fronds aside, a remarkable mat of colourful sponges, sea-squirts, sea-moss and sea-fans of all shapes and sizes appear before you. Orange, red, purple, white and brown, the sponges intertwine in intricate and beautiful patterns. Many other creatures are visible between the sponges, under rocks and poking out of the seaweed holdfasts. They include brightly coloured Sea-stars, Brittle Stars, Abalone, Fan Worms, large sea shells, Hermit Crabs and delicate nudibranchs (Sea Slugs). Fish comprise of schools of Butterfly Perch, Silver Sweep and Long-finned Pike, with Banded Morwongs common amongst the deeper boulders. “

The park’s seafloor drops rapidly from shore, descending to 90 metres depth, which is one of the deepest marine areas within Victoria.  The park represents Victoria’s warmer eastern marine environment, with many animals here being unable to survive in the cooler waters further to the west.

Marija and I had been following two 4WD’s all the way down the Tamboon and Point Hicks Road ahead of us.  After passing through the Thurra River campground and then travelling a further 1km or so metres we reached a locked gate.  The occupants of one of the 4WD’s got out and unlocked the gate and then started locking it again.  Marija asked what was happening, only to be told that vehicular access to the lighthouse was prohibited unless you were staying there.  Bugger!  We hadn’t seen any mention of that anywhere.

So we parked the vehicle and then walked down the beach and set up.

We followed our previous MO of swapping the mic until Marija had 10 contacts in the log, thus qualifying the park for the VKFF program.  Our first contact was with Brett VK3FLCS who was portable in the Heathcote-Graytown National Park VKFF-0624, with a strong 5/8 signal.  We then logged Michael VK3FCMC, followed by Mick VK3GGG/VK3PMG, and then Rick VK4RF/VK4HA.  Contact number ten came 15 minutes into the activation, a QSO with Brett VK2VW.  We were then called by Andrew VK7DW/p who was in the Mount Barrow Falls State Reserve VKFF-1819 in Tasmania.  It was nice to have two Park to Park contacts in the log.

Marija took a break from the radio after logging 11 stations and went for a walk to the lighthouse.  I continued on, logging a steady flow of callers on 40m from VK2, VK3, VK4, VK5 and VK7.  This included another Park to Park, this time with Peter VK3TKK/p who was in the Shallow Inlet Marine Coastal Park VKFF-0749.  It was also nice to speak with Julie VK3FOWL/VK3SRC who was operating from one of her schools.  Julie and her husband Joe VK3YSP run an excellent schools program called the School Amateur Radio Club Network. 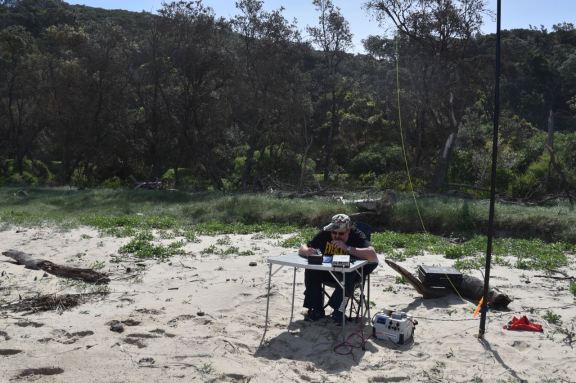 Contact number 44, thus qualifying the park for me for the global WWFF program came 1 hour & 15 minutes into the activation.  That was a QSO with Steve VK5ST in the famous Barossa Valley wine growing region of South Australia.

I logged 49 stations on 40m before heading to 3.610 on the 80m band where I logged 4 stations: Peter VK3PF, Winston VK7WH, Ken VK3UH, and Al VK7AN.  Conditions on 80m around Victoria and Tasmania were excellent, but sadly there were not many callers.  To complete the activation I called CQ on 14.310 where I logged just one station, John VK4TJ in Queensland.  I think there may have been a German station calling, but the signal was so low that I was unable to get the call sign.

It was time to pack up, with 54 contacts in the log for me, and 11 for Marija.  We headed back into Cann River on the Point Hicks/Tamboon Road.  It was now very late afternoon and there were plenty of kangaroos out and about, so it was a slow drive back.

As we drove back out of Croajingolong National Park I decided to put out a few CQ calls from the mobile on 40m.  I logged Mike VK5FMWW and also Roy VK5NRG.  It was very hard keeping the VSWR down on the Codan 9350, I suspect because of all the thick forest we were travelling through.

Once we got back into Cann River we freshened up and then headed to the hotel, where we enjoyed a very nice meal and a few cold beverages. 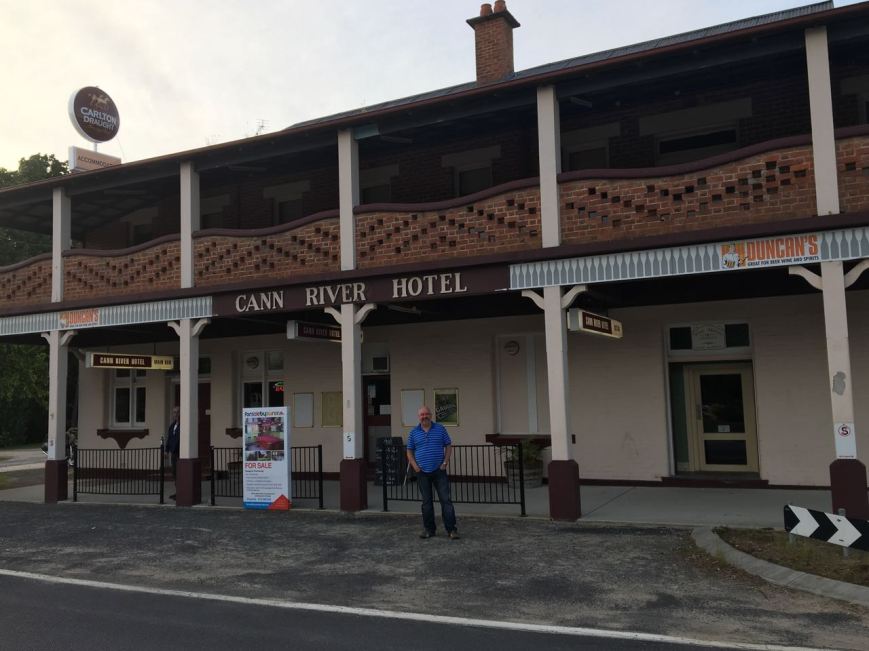