After leaving St Arnaud after lunch, Marija I commenced our journey to New Gisborne, to the north west of Melbourne.  We had booked in to stay at an apartment in New Gisborne for one night with the intention of activating Mount Macedon in the Macedon Regional Park.  It was a drive of around 187 km from St Arnaud to New Gisborne.

Above:- Map showing our travels on day two, from St Arnaud to New Gisborne.  Map courtesy of Plotaroute.

We drove out of St Arnaud along the Wimmera Highway.  About 4 km out of St Arnaud I stopped briefly to have a look at a monument to commemorate the first prospectors for gold who camped at Orr Creek on 25th December 1854.

We continued on to the historic Logan Pub, which dates back to the late 1800’s, and was previously known as The Avoca Forest Hotel.  There were three hotels in Logan, but sadly 2 of the historic pubs have been demolished.  There were a large number of ‘social’ bike riders at the pub during our visit.

Marija and I continued along the Wimmera Highway and soon passed the Moliagul Nature Conservation Reserve which qualifies for the World Wide Flora Fauna (WWFF) program.  Sadly, Marija and I realised that we could just not activate all the parks we drove passed as there were just too many.  But Marija did check the parksnpeaks app on her phone and it showed we were about to drive passed SOTA peak Mount Moliagul VK3/ VN-024 which had a road to the very top. 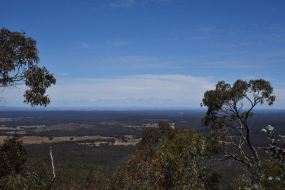 So we decided to venture off the Highway and head to the top of Mount Moliagul which is located about 37 km south east of St Arnaud.

Mount Moliagul is 525 metres above sea level and is worth 2 points for the Summits on the Air (SOTA) program.  The summit was last activated by Mick VK3GGG back in June 2017.

The summit is located near the small township of Moliagul.  The town’s name is believed to be a derivation of the aboriginal word “moliagulk”, meaning “wooded hill”.  The area is notable for the discovery of a number of gold nuggests including the world’s largest, the ‘Welcome Stranger’ which was discovered in 1869 by John Deason and Richard Oates.

Above:- Miners and their wives posing with the finders of the nugget, Richard Oates, John Deason and his wife.   Image courtesy of wikipedia 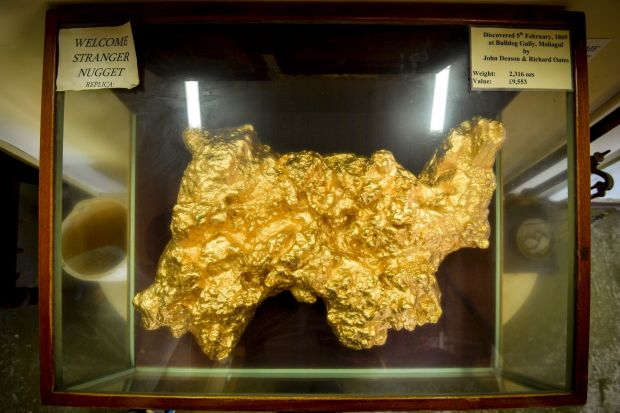 Above:- A replica of the Welcome Stranger nugget.  c/o theage.com.au

Moliagul was once a thriving goldfields town, but today is literally a ghost town.  It is estimated that in 1855 there were about 16,000 people living in the immediate Moliagul area during the peak of the Victorian gold rush period.

The road to the top of Mount Moliagul is dirt and is a bit rough in parts but I think a conventional vehicle would get up there just fine.  There are fantastic views to be enjoyed from the top of the summit.

There is a trig point on the summit along with some communications equipment, but this did not cause any interference on the bands.  It was a hot day and there were no real shade opportunities on the summit. 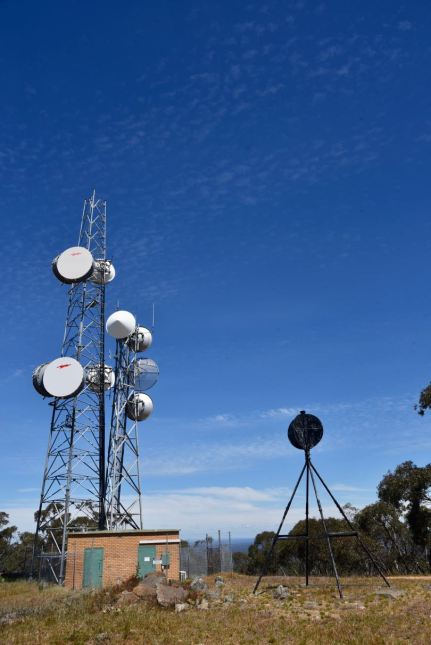 As this was a quick impromptu activation, we quickly strung out the 20/40/80m linked dipole and I started calling CQ on 7.090.  This was answered by John VK5BJE who we had phoned as we were driving up to the summit.  This was followed by Mark VK7MPR, Nev VK5WG and then Adam VK2YK.  I had qualified the summit with my 4 QSOs and I handed the mic over to Marija who logged John VK5BJE, Gerard VK2IO, Rick VK4RF/VK4HA, Garry VK2GAZ, Mark VK4SMA/p who was in the Ravensbourne National Park VKFF-0427 (I also logged Mark), Steve VK7CW, and finally Andrew VK2UH.

To complete the activation I lowered the squid pole and inserted the 80m links and started calling CQ on 3.610.  This was answered by Ian VK5IS, and then Marc VK3OHM. 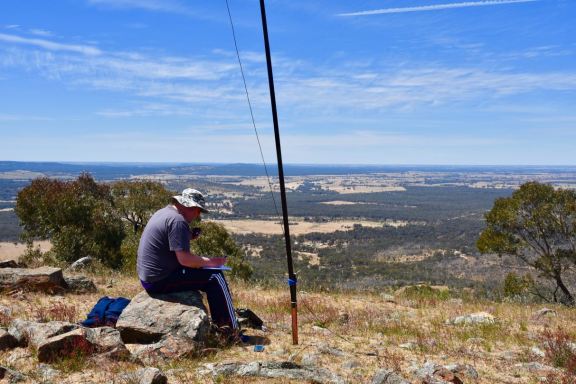 This had been a quick but enjoyable activation, and a new summit for Marija and I as SOTA activators.