Yesterday (Tuesday 26th December 2017) was Boxing Day, and a day of recovery here after a busy Christmas Day.  My wife’s mum had been staying with us for 2 days and in the afternoon Marija drove her down to the airport to fly back home.  As I had seen a few park activators spotted on parksnpeaks I decided to take the opportunity of heading out to activate the Mount Magnificent Conservation Park 5CP-148 & VKFF-0916.

I have activated and qualified the Mount Magnificent Conservation Park previously.  So this was another park to go towards my Boomerang Activator tally for World Wide Flora Fauna (WWFF).   I also dusted off my Buddipole and took that along with me, hoping to make some contacts on that antenna, after having it in storage for about 6 years.

The park is situated about 40 km south west of my home, and about 63 km south of Adelaide. 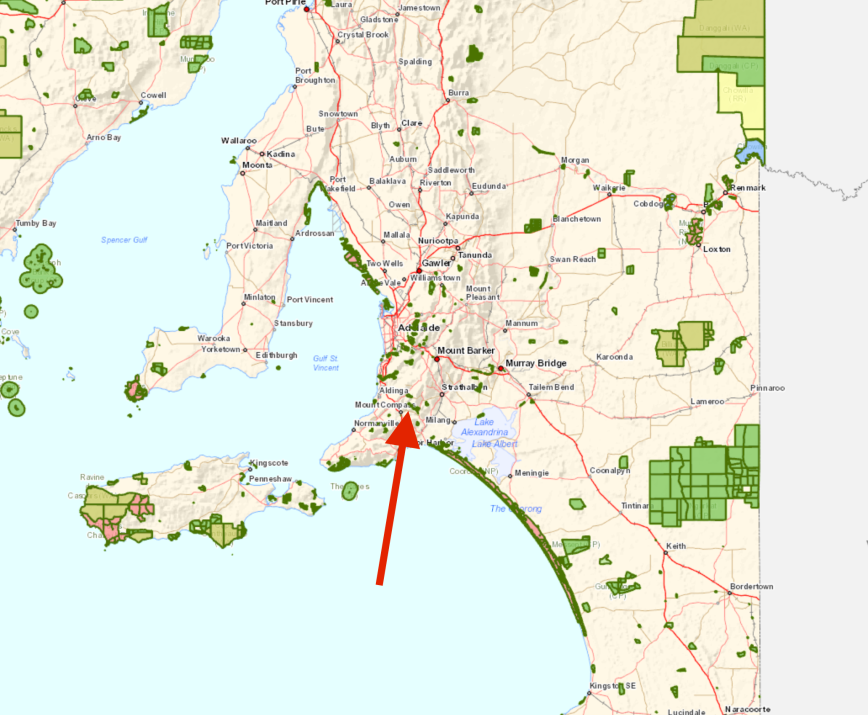 To get to the park I travelled to Echunga and then on to Meadows.  I then took the Brookman Road towards Willunga, turning off at Connor Road, and then travelling south on Blackfellows Creek Road. Above:- Aerial shot of the park.  Image courtesy of google maps

The park is located in close proximity to a number of other parks, including Kyeema, Finnis, Cox Scrub and Bullock Hill.

Above:- Map showing the location of the Mount Magnificent Conservation Park, in close proximity to a number of other parks.  Map courtesy of Location SA Map Viewer.

The Mount Magnificent Conservation Park is 90 hectares (222 acres) in size and was established on the 1st January 1967.  The park contains the Mount Magnificent summit which is 380 metres above sea level, but sadly does not qualify for the Summits on the Air (SOTA) program as it does not have the required prominence.  The summit does however reward those who climb to to the top, with some amazing views of the surrounding countryside. 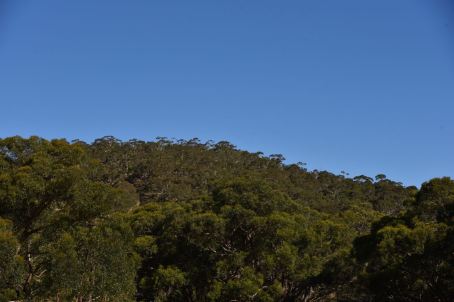 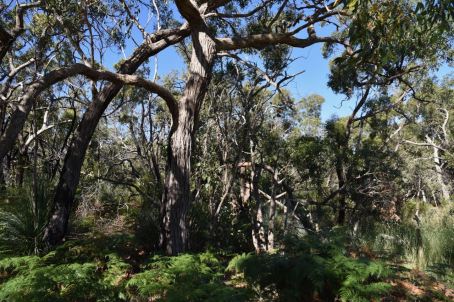 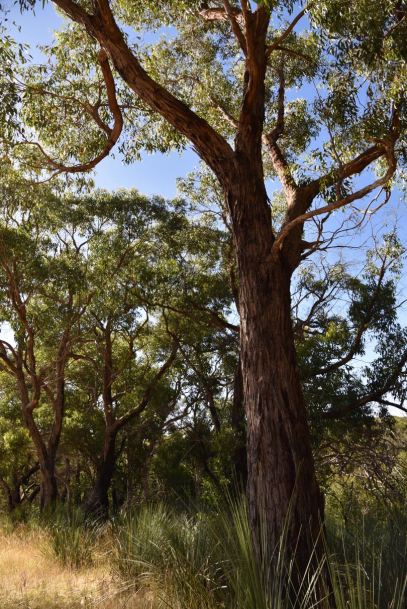 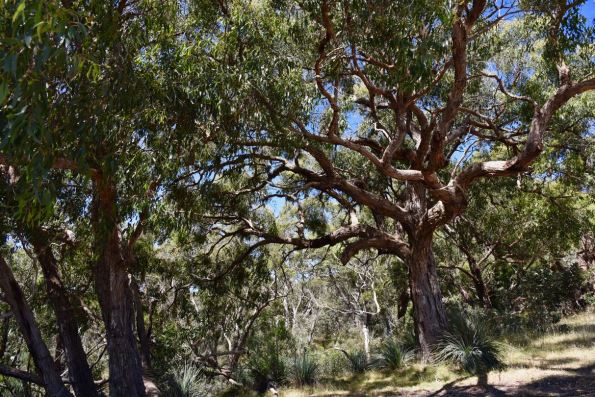 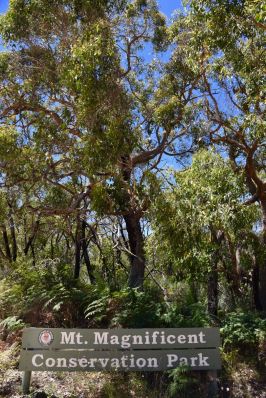 I accessed the park via a track off Blackfellows Creek Road in the south western corner of the park. 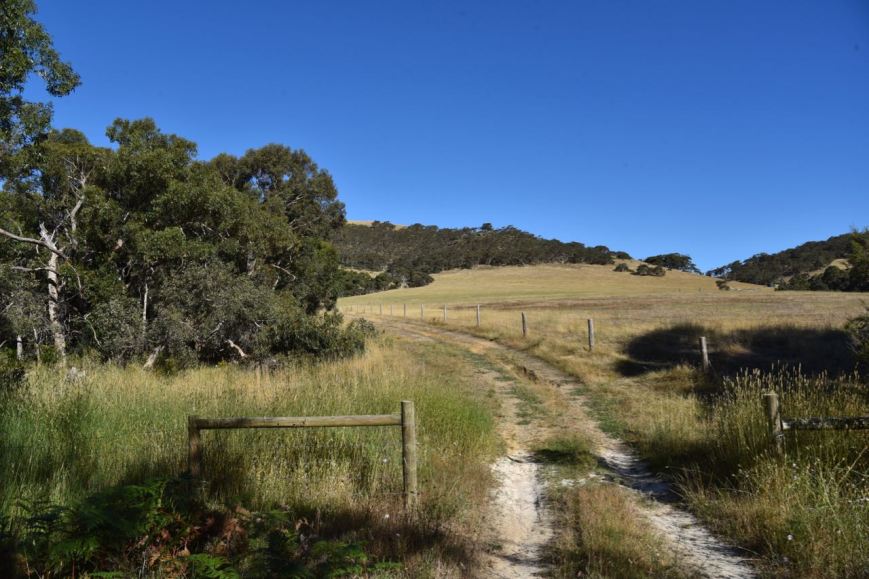 Above:- the track off Blackfellows Creek Road.

The track follows a fenceline and comes to an abrupt end.  However there is plenty of room here to set up. 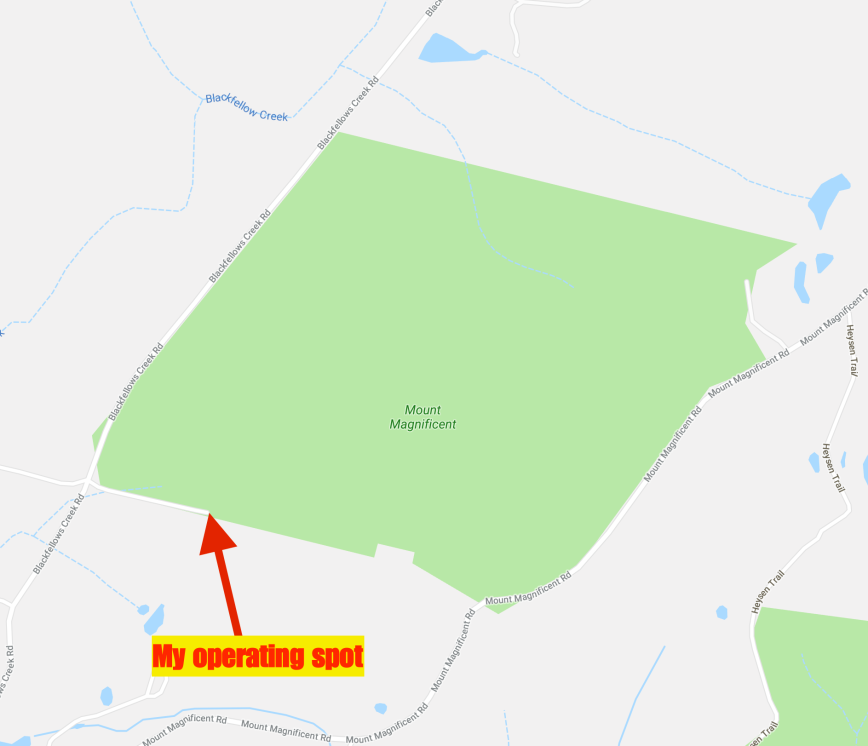 I ran the Yaesu FT-897 at 40 watts for this activation.  I used one of the fenceposts to secure my 7 m telescopic squid pole, with the help of a couple of octopus straps.  I initially used the 80/40/20m linked dipole. 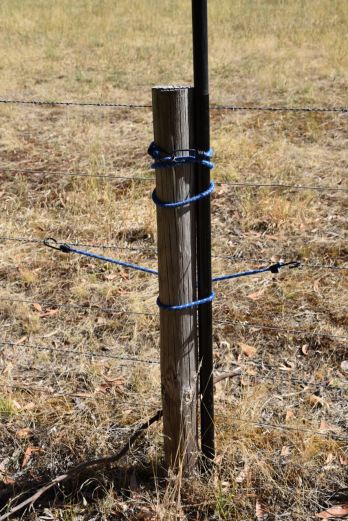 My first station in the log was a Park to Park contact with Mark VK4SMA/p who was in the Plunkett Conservation Park VKFF-1631.  Mark had a good 5/6 signal.  I then moved down the band and started calling CQ on 7.139.  His was answered by Peter Vk5ZPG at Quorn in the north of South Australia, followed by Ray VK4NH/2 and then Keith VK3FMKE.  The band conditions on 40m seemed to be quite good.

Contact number 9 was another Park to Park, this time with Gerard VK2IO/p in the Wamberal Lagoon Nature Reserve VKFF-2013.  I went on to work a total of 30 stations on 40m from VK1, VK2, VK3, VK4, and VK5.  This included Mark VK5QI who was mobile in the Mid North of South Australia with a very nice 5/8 signal, Peter VK3PF mobile, Larry VK5BWA using a remote station in Mount Gambier, and Glenn VK2VX/p who was operating portable in his back yard.  I also logged Matt VK1MA/2 who was operating portable in the Kosciuszko National Park VKFF-0269.

I then tuned across the band and soon had my 4th Park to Park contact in the log for this activation, with a QSO with Ian VK1DI/2 who was activating the Mimosa Rocks National Park VKFF-0317. 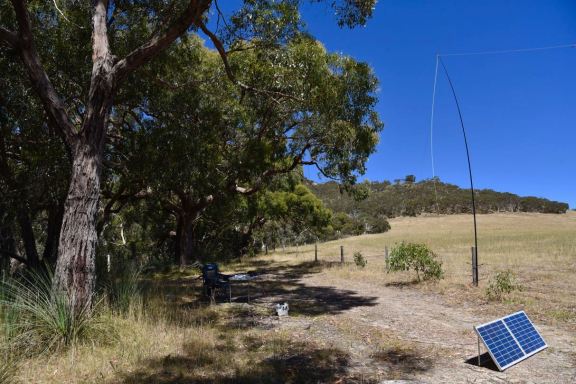 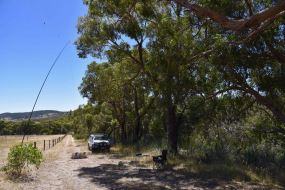 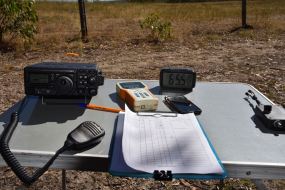 I then set up the Buddipole and after a lot of mucking around I eventually had the VSWR down fine for 40m.  I had not used the Buddipole in about 6 years, and I suspect it is easier to set up than what I experienced.  After setting up the Buddipole I called CQ on 7.139 which was answered by Kevin VK3VEK with a strong 5/9 signal from western Victoria.  This was followed by Kevin VK3HKK in Morwell, and then another Park to Park, this time with Peter VK3TKK/p who was activating the Lerderderg State Park VKFF-0763. 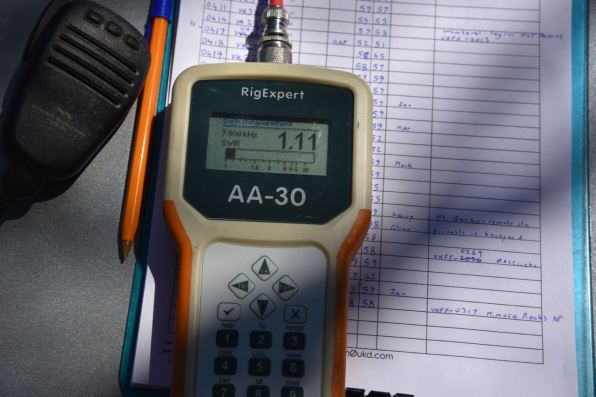 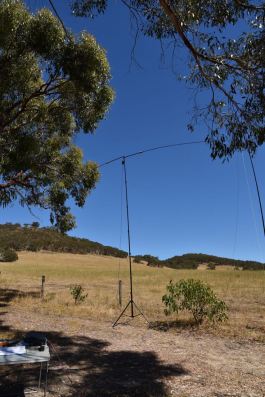 I then saw a spot for Adam VK2YK and moved back to the linked dipole.  I logged Adam who was activating the Worimi State Conservation Area VKFF-1399.  After speaking with Adam I headed up to 7.150 and started calling CQ.  Simon VK3ELH/p gave me a shout from the Greater Bendigo National Park VKFF-0623, using his home brew Bitx40 transceiver.  I logged 2 further stations, John VK3YW and then Ron VK3IO, before deciding to give the 80m band a go.  My wife Marija had arrived home from the airport and had sent me a text to advise that there was no reception of my signal on 40m back home.

I called CQ on 3.610 and found the VSWR was through the roof.  So after checking the BNC connection and lowering the squid pole a number of times to check the links, I eventually found that my spare crocodile clip at the end of the antenna had got caught up on the barbed wire on the fence.  Once removed the VSW immediately dropped.  I logged Marija VK5FMAZ, John VK5NJ in Mount Gambier, and then Mick VK3GGG/VK3PMG in western Victoria.

It was starting to get hot, and I had run out of shade.  It was now 32 deg C.  I decided to have one last quick tune across the 40m band, and fortunately found David VK3IL/p activating SOTA peak VK3/ VT-006 in the Baw Baw National Park VKFF-0020. 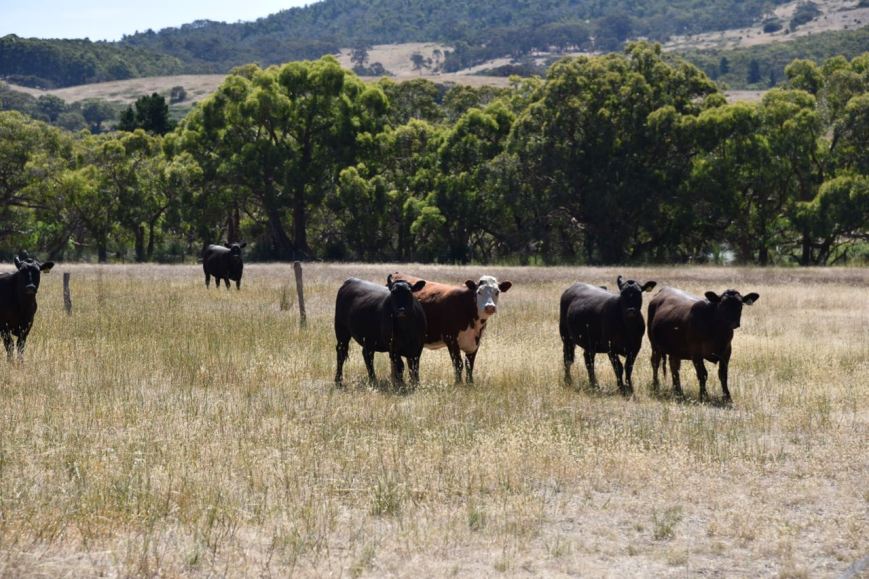 With 49 contacts in the log I packed up and headed home, taking a different route.  I travelled through the little town of Prospect Hill.  This area was originally called McHargs Hills by early European settlers, in honour of pioneers John and Elizabeth McHarg.  If you are ever in the area, the little Prospect Hill Museum is well worth a visit.

One of the interesting things to have a look at in Prospect Hill is the Flag Tree.  Flags were raised to signal the sighting of a ship carruing emigrants, mail or goods.  In this way, a message could be passed from tree to tree.  Various coloured flags were used to signal en emergency.  The site of Prospect Hill’s original flag tree is located alongside the museum. 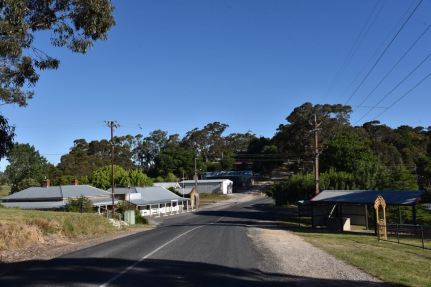 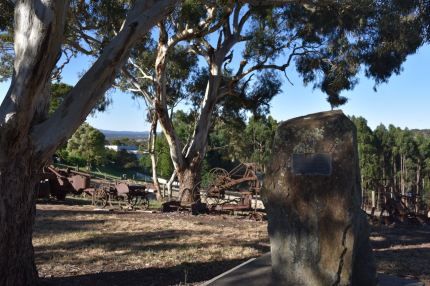 This is very beautiful country through this part of the Mount Lofty Ranges.

Above:- typical countryside in the Prospect Hill area

I continued along Milligans Road and then Morris Road and on to the town of Meadows, and then home.  It had been an enjoyable later afternoon out in the park, and proved that I need a lot more practice in setting up the Buddipole. 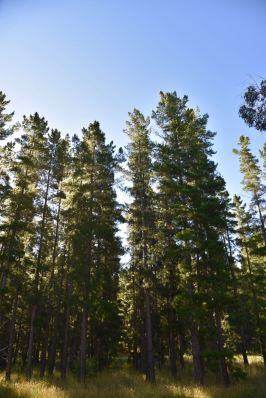 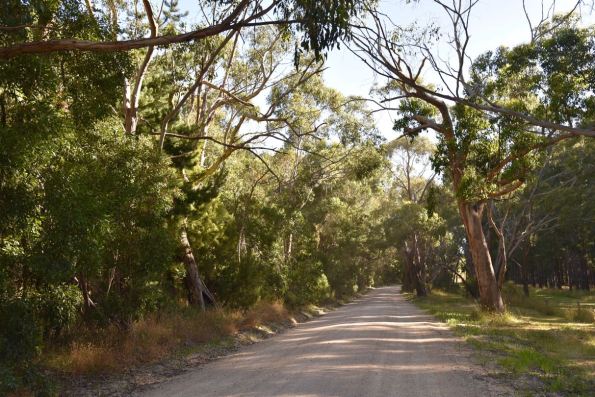