It has become an Australian amateur tradition now…..the SOTA New Years Day activation event.  Each year on New Years Day, Aussie amateurs head out into the field to activate summits for the Summits on the Air (SOTA) program.  New Years Day is a unique day, in that activators can claim points for an activation either side of the ‘UTC rollover’ in a new calendar year.

Coordinated Universal Time, abbreviated as UTC is the primary standard time by which the world regulates clocks and time.  It is within about 1 second of mean solar time at 0° longitude.  The UTC rollover is am amateur radio term, describing when it turns midnight.  In Australia (well in most parts – considering daylight saving time), that is in our mornings.  In South Australia it is 10.30 a.m. (Summer time).

I had worked on New Years Eve, and didn’t finish work until 3.30 a.m. (and into bed by 4.00 a.m.) so I didn’t plan on going far on New Years Day.  The closest summit to me is Mount Lofty, just 15km down the road, but that had already been taken by 2 other VK5 activators, so I decided to activate Mount Gawler, VK5/ SE-013.  Although I had activated Mount Gawler during 2017, I would still pick up the points for 2018.

Mount Gawler is located about 35 km nort east of the city of Adelaide, and about 39 km north from my home. 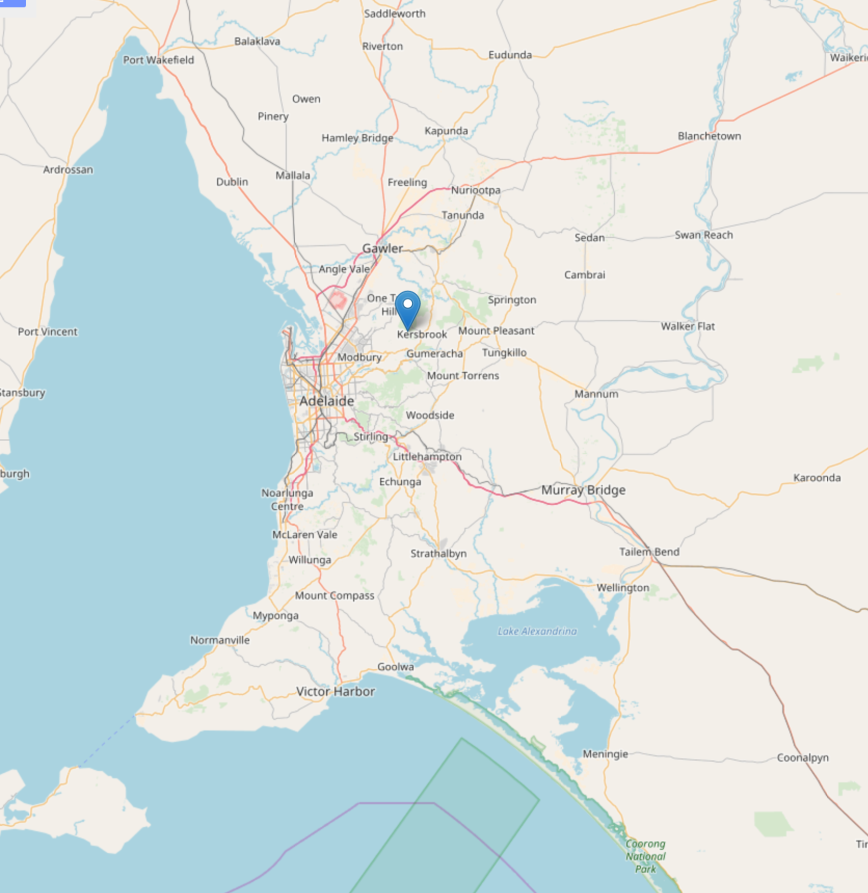 Above:- Aerial shot of Mount Gawler, with the city of Adelaide in the background.  Image courtesy of google maps

The summit is located after Lieutenant-Colonel George Gawler (1795-1869), the second Governor of South Australia. 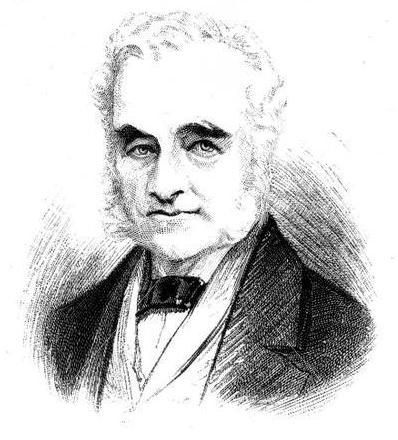 Mount Gawler is 541 metres above sea level and is worth 2 points for the SOTA program.  It is easily accessible.  There is a trig point at the summit, but it is located on private property.  The landowners, Noel and Anne, are a very friendly couple and are happy for amateurs to access their property (with prior permision).  However, the activation zone includes the Mount Gawler Road, so you can operate from there.

It is about a 40km from my home in the central Adelaide Hills to the summit.  The drive took me out through Nairne, Woodside, Lobethal, Gummeracha, and on to Kersbrook.   As I travelled down Checker Hill Road, the summit came into view.  The drive down Checker Hill Road towards Kersbrook is very steep, and this hill has featured in the world famous Tour Down Under Cycling event.  The Union Cycliste Internationale (UCI) categories Checker Hill as a category 2 climb (the second hardest).

Above:- Looking down Checker Hill Road.

I then turned left onto Mount Gawler Road and soon reached the summit.  Noel and Anne had kindly unlocked the gate for me as I had telephoned them prior to my visit.

Above:- Entry to Noel and Anne’s property.

This area was ravaged by an extremely devastating bushfire back in early 2015, known as the Sampson Flat fire.  A total of 38 homes and 125 outbuildings were destroyed.  The total cost was estimated to be more than A$13 million.  Fortunately there was no loss of life, although a total of 134 injuries were reported.  The size of the area burnt was more than 12,500 hectares (31,000 acres).

Above:- The Sampson Flat fire as seen from space.  Image c/o http://www.aerometrex.com.au/

The video below will give you a good idea on just how big this fire was and the devastation it caused.

There is a trig point at the summit, installed by the former Department of Lands. 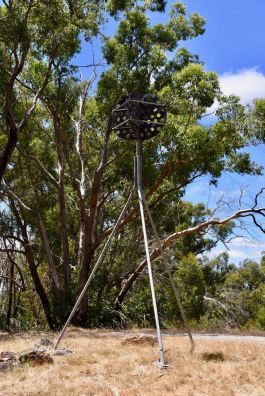 There are also some fine views to be enjoyed of the northern and north eastern suburbs of Adelaide, and out north towards the Barossa Valley.  Gulf St Vincent is also clearly visible, and on a fine day you can see across to the Yorke Peninsula. 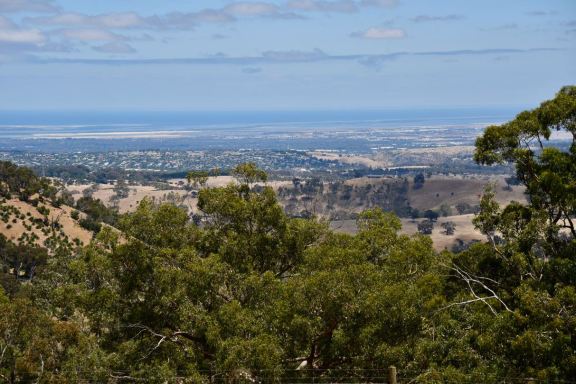 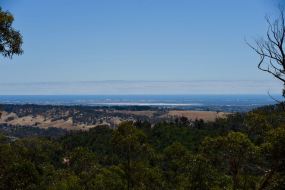 It was a beautiful sunny morning.  I setup underneath a gum tree alongside of the trig point.  As this is an easy drive up summit, I had the comfort and luxury of the fold up table and a deck chair.  For this activation I ran the Yaesu FY-897, at 20 watts, and the 20/40/80m linked dipole, and my 1/2 wave 15m dipole.  I supported the antennas on a 7 metre heavy duty squid pole.

I was set up and ready to go by just after 2330 UTC (10.00 a.m. local time).  I decided to leave the links out on the dipole, from my last activation, and try the 20m band first.  I normally use 40m first during my activations.  And I’m pleased I did try 20m first as there was a lot of activity there.  First in the log was Mick VK3PMG/VK3GGG, who was calling CQ on 14.310 and activating SOTA peak Blue Mountain VK3/ VS-015 which is located in the Landsborough Nature Conservation Reserve VKFF-2129.

Kyle ZL2KGF was a real bonus, a nice S2S into New Zealand.  Unfortunately he was the only New Zealand SOTA activator in the log during the morning.

After the UTC rollover I worked a further 11 stations from VK2, VK3, VK4, VK5, and New Zealand.  This included 3 more S2S contacts:-

But callers soon dried up, so it was down with the squid pole, in with the links, and off to the 40m band.  First in the log there was Andrew VK1AD/2 on SOTA peak South Black Range VK2/ ST-006 who was calling CQ on 7.100, followed by Andrew VK3ARR/p on 7.100 activating Mount Warrenheip VK3/ VC-019.  I then worked Graeme VK3GRA/p who was activating Mount Macedon VK3/ VC-007 in the Macedon Regional Park VKFF-0972.  I kept tuning across the band and then found Ian VK1DI/p on Mount Ainslie VK1/ AC-040 in the Mount Ainslee Nature Reserve VKFF-0850.

As I was finishing my QSO with Ian, Noel drove down the driveway and I took some time out to have a chat.

I then propped on 7.130 and called CQ.  I logged 26 stations including the following S2S contacts:-

I also spoke with Liz VK2XSE/p and her son Adrian who were activating the Murrumbidgee Valley Regional Park VKFF-1786. 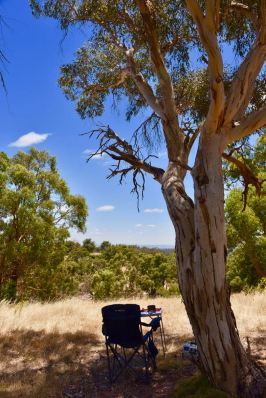 When things slowed down I tuned across the band and found Peter VK3PF/p calling CQ from Mount Stanley VK3/ VE-126.  But Peter was the only new SOTA and/or Park activator that I could find, so I headed down to 7.090 and called CQ once again.  I logged 10 stations including

Surprisingly there was little activity on 40m, so I decided to give the 80m band a go.  I called CQ on 3.610 and self spotted on SOTAWatch and logged Marija VK5FMAZ and Brian VK5NBQ who was at nearby Lobethal with a huge signal.  But sadly they were my only 2 callers on 80m.

I saw a spot come up for Mick VK3GGG/p on Point 756 Pyrenees VK3/ VS-018 on 7.090, so it was down with the squid pole again and out with the 80m links.  After logging Mick I gave the 20m band a go, with my first contact there being with Rob VK4AAC/2 who was activating the Crawney Pass National Park VKFF-0583.  I then saw that Mick VK3GGG had moved from 40m to 14.315.  Mick was quite light, but we successfully made a contact (3/1 both ways), due to the low noise floors on both summits.

I then moved to 14.305 and called CQ which was answered by Soren ZL1SKL in Auckland in New Zealand.  I logged a further 8 stations, including Stuart VK8NSB up in Darwin, and also Matt VK1MA/2 activating Webbs Ridge VK2/ ST-005.

I decided to give the 15m band a try and I am very pleased I did, as conditions there were quite good, with a total of 31 stations logged there from VK2, VK3, VK4, VK5, VK6, VK7, VK8, USA, and Japan.  I was very pleased to work Mike NW7E in Oregon in the USA who had a nice 5/7 signal.  And also JH1XMV in Japan.  Other good contacts on 15m included Stuart VK8NSB in Darwin, who was a little weaker on 15m compared to 20m.  Also Allen VK6XL in Western Australia.  Having activated portable in VK6 I know how hard it is over there on the other other side of Australia, so it’s always nice to log the Western Australian hams.

To finish off the activation I headed back to 40m where I spoke with Peter VK3TKK who was activating the Ironbark Road Nature Conservation Reserve VKFF-2113, and then Gordon VK5GY/p who was in the Ferries McDonald Conservation Park VKFF-0881.

Time to pack up and head home, with a total of 119 contacts in the log, including 34 Summit to Summit contacts and 12 parks.