After packing up at Mount Gawler I headed to the Kersbrook Native Forest Reserve VKFF-2887.  This would be another first-time activation of this particular park.  The park is located about 8 km north of the town of Kersbrook and about 37 km north east of the city of Adelaide. 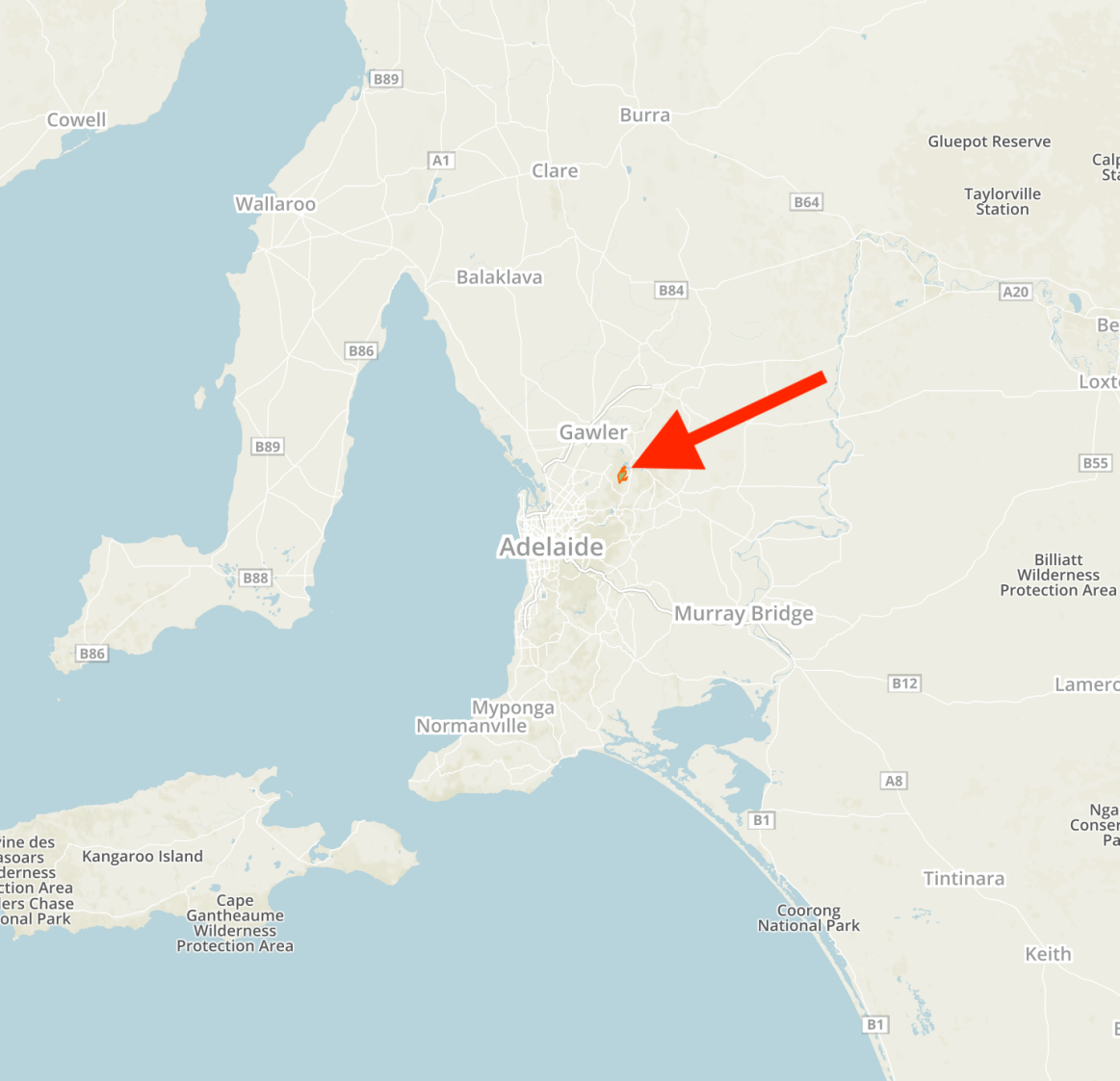 Above:- Map showing the location of the Kersbrook Native Forest Reserve.  Map courtesy of Protected Planet.

The Kersbrook Native Forest Reserve is 842 hectares in size and comprises a parcel of scrub representative of the original vegetation of the Southern Mount Lofty Ranges. 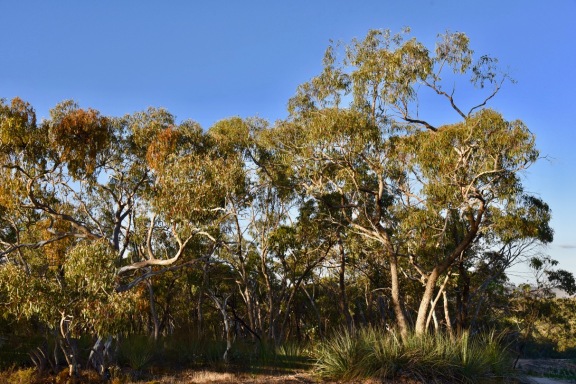 The park is part of a large area of native forest which extends southward from the South Para Reservoir about 5 km south-west of Williamstown in the southern part of the Barossa Vallet.  The forest area is referred to as Old Kersbrook.  The park is surrounded by private land holdings.  The Para Wirra Recreation Park and Humbug Scrub private sanctuary adjoins the west side of Kersbrook NFR.

Above:- Map of the Kersbrook Native Forest Reserve.  Map courtesy of Forestry SA.

The devastating January 2015 Sampson Flat bushfire burnt out most of the Kersbrook Native Forest Reserve, stopping in the north of the park at the Castle yard Track.

The Kersbrook Native Forest Reserve is one of 15 NFR’s in the Mount Lofty Ranges.  The reserve is dominated by Long-leaf Box and Pink Gum, over a diverse shrub and understorey of native plants.  Two species of nationally endangered native orchid occur here.

Above:- An aerial shot of the Kersbrook Native Forest Reserve, looking north towards the famous wine growing region of the Barossa Valley.  Image courtesy of google maps.

I headed north on the Kersbrook Road and soon saw a significant plume of smoke off in the distance.  It appeared to be very close to where I wanted to go.  A check of the Country Fire Service website failed to reveal any active fires, so I presume it was a controlled burn.

Above:- Looking north from the Kersbrook Road.

It was a bit of a challenge to get into the reserve.  I had studied the maps prior to leaving home and it appeared that this may have been a walk in.  My GPS first took me down Sheoak Road which was meant to run into Ridge Road.  However, Sheoak Road was a no through road.

So I turned around and headed back out onto the Kersbrook Road, travelling south.  The GPS then took me into another track which turned out to be a dead end.  Things were not looking good.  It was time to study the map again.

I decided to head north along Bassnet Road which took me into the little locality of Humbug Scrub which was severely impacted by the Sampson Flat bushfire.  During the 1800s, German settlers on their way to the Barossa Valley called this area Hamburg Scrub.  English speaking locals re-named it Humbug Scrub because the bushland was considered to be ‘very deceptive and incomprehensively embarrassing’ with people often getting lost in the scrub. 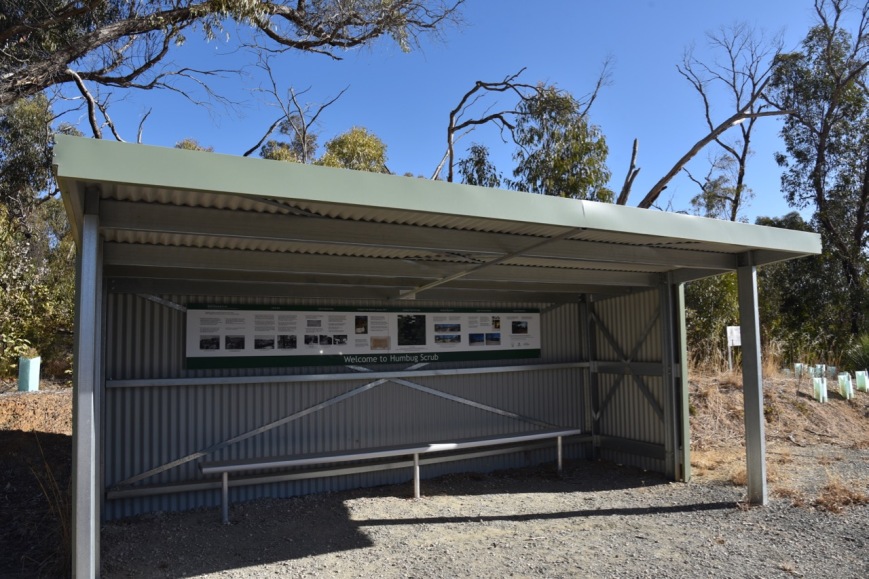 There were some beautiful views here of the reserve and the adjacent pine forests and hills. 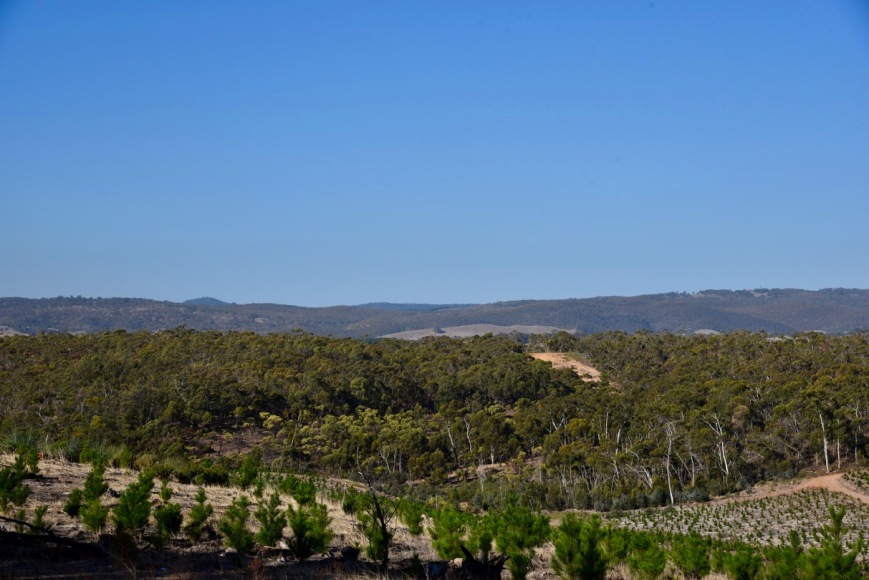 Sadly, there was a lot of rubbish dumped here which did not seem to be attracting the attention of the authorities with respect to clean up. 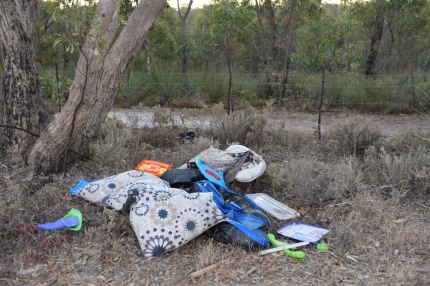 As I was offloading my gear a Foresty SA vehicle pulled up and I explained what I was doing.  He seemed fine and discussed an old radio he previously had which he listened to overseas broadcast stations on.  I also confirmed that the smoke was from a controlled burn off.

After setting up on Cattleyard Track, I headed to 7.144 where I found Helen VK7FOLK/p and Jonathan VK7JON/p activating the Stanley Conservation Area VKFF-2919 in Tasmania.  I logged both Helen and Jonathan, and then headed down the band to 7.139.  I asked if the frequency was in use and Peter VK3PF came back to advise the frequency was clear.

After logging Peter, I called CQ and Deryck VK4FDL responded, followed by Peter VK3ZPF and then Damien VK3FRAB.  A flurry of callers followed, and it took me just 6 minutes to get contact number 10 in the log, a QSO with Cliff VK2NP.  I had qualified the park for VKFF.  Contact number 11 was another Park to Park, this time with Mike VK6MB/3 who was activating the Chiltern-Mount Pilot National Park VKFF-0620.

It took me just 24 minutes to qualify the park for the global WWFF program with 44 contacts.  I logged a total of 56 stations on 40m from VK1, VK2, VK3, VK4, VK7, New Zealand and Spain.  This included a Park to Park with Neil VK4HNS/p who was in the Main Range National Park VKFF-0300, a contact with Peter VK3YE/p who was pedestrian mobile on the beach at Chelsea, and a contact with Deme EA5IPC in Spain which was a big surprise.

I then decided to try my luck with some DX on 20m.  I headed to 14.310 and found Greg VK4VXX/6 calling CQ from Stokes National Park VKFF-0468.  I then moved down to 14.305 and started calling CQ.  Murray VK4MWB came back to my call, followed by Glenn VK2WGW, and then Giancarlo IZ1AWC in Italy with a good strong 5/9 signal.  I logged a further seven stations on 20m including IZ8DFO in Italy and UT5PI in Ukraine.

One sad point of this activation was the response I received from an amateur on 14.307.  I had been operating on 14.305 for 15 minutes when some German speaking stations came up on 14.307, just 2 kc above me.  It was clear that one was from Australia, as he was very strong.  I went up to 14.307 and asked politely if they would QSY a little bit away from me.  I was ignored.  I asked again and was told by the Australian station ‘we have used this frequency for 30 years’.  I informed this gentleman that he did not ‘own’ the frequency and again asked if they would mind QSYing.  Sadly they ignored me, and I decided not to push the issue and I headed to 80m.  So I apologise in advance to anyone who may have been calling me.

I then called CQ on 3.610 on the 80m band and this was answered by Adrian VK5FANA on the Yorke Peninsula with a big signal.  I logged a further 6 stations from VK1, VK3, & VK5, including my wife Marija VK5FMAZ.

To conclude the activation I moved back to 40m where I logged a further 9 stations, including a Park to Park with Greg VK4VXX/6 in VKFF-0468.

I now had 84 contacts in the log, including 6 Park to Park contacts, and the temperature had dropped to 12 deg C.  It was getting cold and dark and it was time to pack up and head home.