My final park for the 2019 VK Shires Contest was the Myponga Conservation Park 5CP-157 & VKFF-0921 which is located in the Yankalilla Council area (YD5).

The park is located about 67 km south of Adelaide and about 8 km south of the town of Myponga.

Above:- Map showing the location of the Myponga Conservation Park south of Adelaide.  Map courtesy of Location SA Map Viewer.

After leaving Mount Billy I travelled along Hindmarsh Tiers Road and then along Springmount Road and then on to James Track.  I soon reached the park.  Since my last visit, there is now a gate which is unlocked. 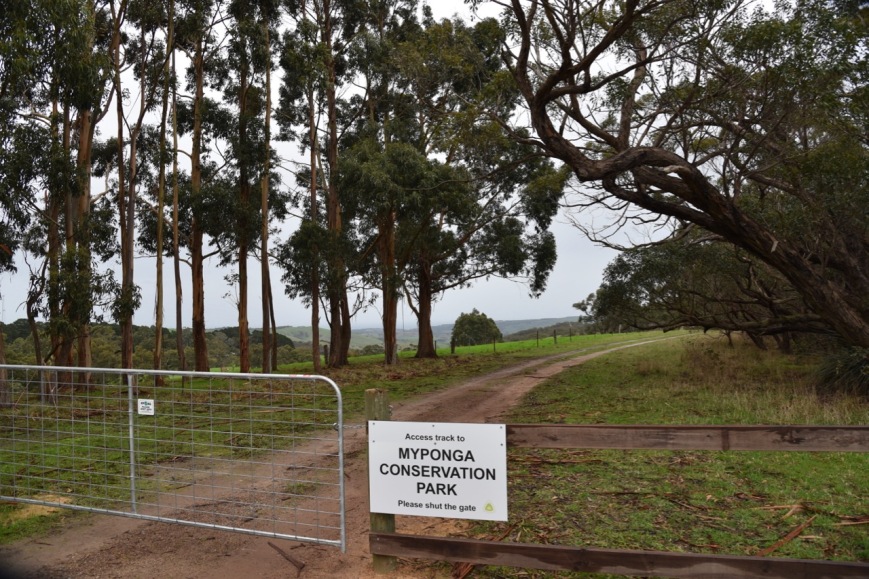 The Myponga Conservation Park is 167 hectares in size and was proclaimed on the 17th February 1997.  It is a hilly park and has several rocky outcrops and waterfalls.  Several habitats exist in the park including Open Forest Over Wet Heaths in the gullies – messmate stringybark and cup gum over prickly tea-tree and heath tea-tree.  Also found is Low Very Open Woodland – cup gum and pink gum over cranberry heath and common fringe-myrtle. Above:- Aerial view of the Myponga Conservation Park looking north back towards Adelaide.  Image courtesy of Google maps.

Myponga which is at the centre of rich grazing and dairy country.  The name Myponga is derived from the Aboriginal word ‘maippunga‘ meaning locality of high cliffs.  Myponga is a sleepy little town with a population of about 550 people.  Many years ago, large gum trees were felled here and prepared for use in the Broken Hill mines.  A cheese factory was also established and its produce was noted for its high quality, much of which was exported.  This is now part of the Farmers Market.  Another worthwhile place to visit is the Smiling Samoyd Brewery.  In the early 1950s uranium was discovered and mining prospects investigated, however, no mines were developed.

I set up in my normal operating spot along the Heysen Trail which runs off James Track.  This is beyond the gate and is a shared track for cars and walkers, so take care.

Above:- An aerial view of the Myponga Conservation Park showing my operating spot.  Image courtesy of Location SA Map Viewer.

The showers had started to set in.  I started off outside of the car, but when the showers become a little heavy I retreated to the 4WD.  I had left it a little late to get to Myponga, with the time now being 0510 UTC (2.40 p.m. local time).  I had just 50 minutes before the finish of the contest.

I first tuned across the band and logged Roy VK3GB.  I then moved down the band and started calling CQ.  My first taker was Tony VK3XV, followed by Cliff VK2NP, and then Mike VK3MKE.

I logged a total of 43 stations on 40m.  This included three Park to Park contacts: Alan VK2MG/4 in the North Pine Dam Nature Refuge VKFF-2876; Peter VK3TKK/p in the Yarck Nature Conservation Reserve VKFF-2241; and Greg VK4VXX/2 in the Goobang National Park VKFF-0204.

Unfortunately, I did not have enough time to try 20m or 80m.  It was the end of the contest.  I had activated 6 different parks in 6 different shires.  I had logged a total of 310 contacts.  THANKS to everyone who called.

Department of Environment and Natural Resources, 2011, ‘Parks of the Fleurieu Peninsula’.