Each VKFF activator who headed out to activate a park on National Tree Day 2020 will be issued with a special activator certificate by the VKFF program. I had a bit of a sleep in on Sunday and by the time I got up at 8.30 a.m. local time, the weather was not looking good.  A glance out of the living room window and it appeared to be raining.  Fortunately, it turned out not to be rain, but heavy fog.

Marija VK5FMAZ and I loaded the 4WD and we headed to the Bullock Hill Conservation Park 5CP-265 & VKFF-0873, which is our ‘local park’ being just a few km from home.  Bullock Hill is about 60 km south-south-east of Adelaide.

The Bullock Hill Conservation Park is an undulating park with tall stands of eucalyptus including pink gum and cup gum.  It is about 221 hectares in size and was proclaimed in January 2014.  Access to the park is either via Haines Road to the south of the park, or via Wattle Flat Road to the east of the park.  At its highest points, the park overlooks Lake Alexandrina and Lake Albert.

The park takes its name from the small summit of Bullock Hill which rises to about 188 metres and is located in the park.

Above:- An aerial view of the park looking north.  Image courtesy of google maps.

Since our last visit, thousands of trees have been planted in the eastern section of the park, so it was very appropriate that we were activating this part of the park for National Tre Day. 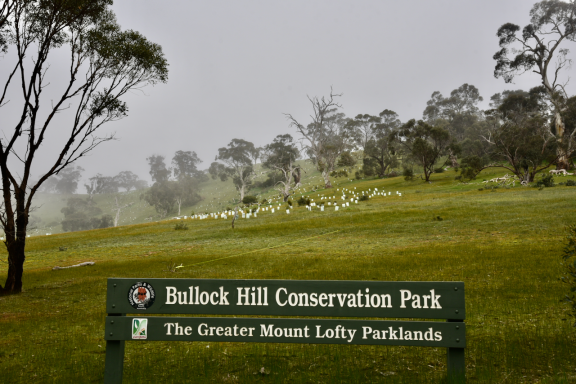 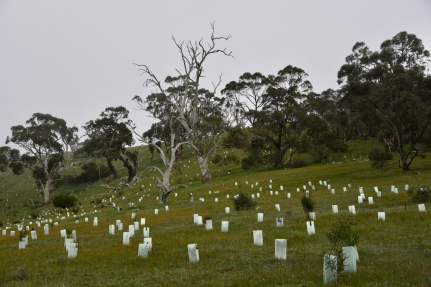 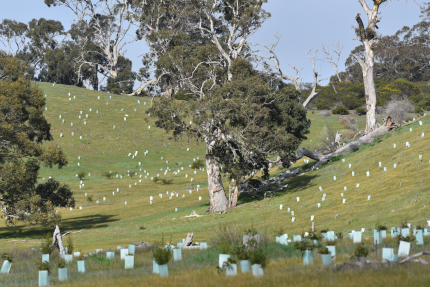 Marija and I set up on the eastern side of the park off Wattle Flat Road.  We ran the Yaesu FT-857d and the 20/40/80m linked dipole for this activation.  Marija ran 10 watts PEP while I ran about 40 watts. We were set up by about 9.25 a.m. which was just before the UTC day rollover.  I started calling CQ on 7.144, and this was almost immediately answered by Ron VK3AFW.  Unfortunately the Wireless Institute of Australia broadcast commenced on 7.146 and the signal from VK2 as very strong.  So I QSYd down the band to 7.110.  Ron VK3AFW followed me down and was first in the log for this activation. This was followed by Peter VK3ZPF and then my first Park to Park contact for the day, a QSO with Marty VK4KC/p who was in the Bribie Island National Park VKFF-0053.  Marty has put together a very good video of his activation which can be found below.

I qualified the park for VKFF by getting 10 contacts in the log, and then handed over the microphone to Marija so that she could qualify the park.  This would be Marija’s first park activation for 2020.

First in the log for Marija was Sue VK5AYL, followed by Marco VK2FMPC, and then Nick VK3ANL.  Marija’s first Park to Park contact was with Marty VK4KC/p in the Bribie Island National Park VKFF-0053.

It didn’t take long and Marija had a mini pile-up happening.  Contact number 10 for Marija was a QSO with Murray VK4MWB.  Marija ended up logging a total of 26 contacts on 40m, including another Park to Park with Compton VK2HRX/p in the Blue Mountains National Park VKFF-0041.

Whilst Marija was on air she received a message from our 21-year-old daughter asking if she could be picked up from Mount Barker, so Marija headed off on her ‘taxi duties’ leaving me in the park.

I called CQ again and this was answered by Leigh VK3SG, followed by Peter VK5PET, and then Compton VK2HRX in the Blue Mountains National Park VKFF-0041.

I worked a further 18 stations including the following Park to Park contacts:-

As callers had slowed down a bit, I took the opportunity of moving to the 80m band as I had seen a spot on parksnpeaks for Ian VK5CZ/p who was in a park on the Yorke Peninsula.

I logged Ian VK5CZ/p on 3.680 who was activating the Bird Islands Conservation Park VKFF-0871 and had a 5/9 plus signal. 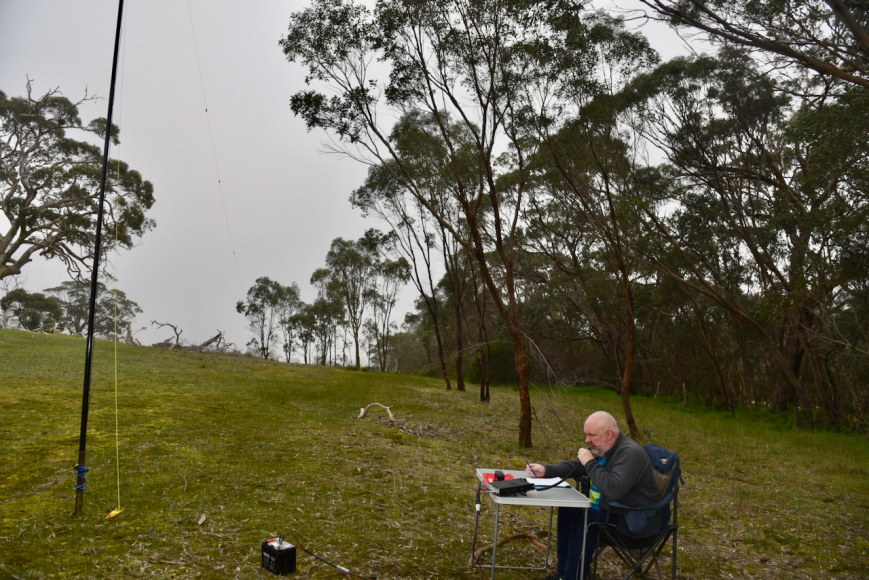 I then moved down to 3.610 where I logged a total of 6 stations, all VK5’s.  This included a Park to Park with John VK5BJE/p who was in the Mark Oliphant Conservation Park VKFF-0782, and Adam VK2YK/5 who was in the Cudlee Creek Conservation park VKFF-1023.  Despite conditions on 80m being exceptionally good around South Australia, sadly I could only manage the 6 contacts on 3.610.

I then moved to the 20m band and started calling CQ on 14.310.  This was answered by park regular John VK4TJ.  I logged a total of 9 stations from VK4 and one New Zealand station ZL3RIK.

I then had a tune across the band and found Mark VK4SMA/p calling CQ from Wacol Bushland Nature Refuge VKFF-2879.  I then moved back to 14.310 and logged Ralph VK2TRK and Hans VK6XN.  Before heading back to 40m I had one final tune across the 20m band and found Di VK4DI operating on 14.263 with the special callsign of VI110WIA.

I lowered the squid pole and reinserted the links for the 40m band, and started calling CQ on 7.144.  This was answered by Dennis VK2HHA, followed by Ade VK4SOE/p on his cattle farm, and then Peter VK3PF/p on SOTA summit VK3/ VT-088 in the Alpine National Park VKFF-0619.  I logged another 2 stations before Marija arrived back at the park, and jumped back into the operator’s chair. First in the log on Marija’s second round was Dennis VK2HHA, followed by David VK5PL/p in the Little Mount Crawford Native Forest Reserve VKFF-2884.  I also logged David.

Marija logged a further 18 stations and had soon qualified the park for the global WWFF program with 44 contacts.  The lucky 44th contact was Deryck VK4FDJL/p who was in the Millstream Falls National Park VKFF-0315.  Other Park to Park contacts in this session for Marija was with Tait VK1HAB/p in the Mount Taylor Nature Reserve VKFF-0854, and John VK5BJE/p in the Mark Oliphant Conservation Park VKFF-0782.

During my visit to the park I did my normal little stint of bird watching.  I took the photos below of a very active Striated Pardalote who was busy collecting pieces of dried grass.

I also captured this little one, I think a Striated Thornbill.

And there were also quite a few Silvereyes who were active in the park as well.

Marija and I ended up with a total of 105 contacts during this activation.  This included 20 Park to Park contacts.