This afternoon was such a terrific afternoon weather wise that I decided to venture out and head east up the South Eastern Freeway, & activate the Ferries McDonald Conservation Park.  The park is situated about 60 kms east of Adelaide, and about 20 kms south west of Murray Bridge.  Its not that far from my home qth.  Access is either via Chaunceys Line Road via the town of Hartley, or via Ferries McDonald Road via Monarto South.

Ferries McDonald Conservation Park covers an area of about 860 hectares and contains one of the few pieces of remnant Mallee vegetation close to Adelaide.  It is important as it has never been cleared for farming, and is an example of the original vegetation of the area.  Within the park there are numerous bird species (over 60 have been recorded), echidnas, marsupial mouse, and Western Grey kangaroos.  It is also home to the highly endangered malleefowl.  Although I didn’t see one, I did go for a walk prior to setting up and I saw one of their nests which are built on the ground as a mound.  The park is named after Mr. Ferries and Mr. McDonald who donated the land for conservation, last century.

I accessed the park via Chaunceys Line Road, and set up the gear near the carpark at the eastern end of Chaunceys Line.  As per usual I used the FT-817nd, just 5 watts output, and my dipole.  There are plenty of trees here to hang the ends of the legs from, and I used a couple of big rocks to hold the 7m squid pole in place.  The park contains thick mallee and other Mt Lofty Ranges vegetation, including gums.

I started off on 40m and my 1st QSO of the day was with Gary, VK5ZK, down at beautiful Goolwa.

My 2nd QSO of the day was with Peter VK3PF, who advised that by working me had had racked up his 10 points, thus qualifying for the Bronze level of the VK5 National & Conservation Parks Award.  Congratulations Peter on becoming the first interstate operator (and in fact the first ever) on getting to Bronze as a “Hunter”.  I know there are plenty of other guys knocking on the door as ‘Hunters’, and most of those are from VK3, which is great to see.

I also spoke with Ian VK5CZ who again was using just 100 milliwatts from up at Clare.  Ian was an excellent signal (5/6) even on such low power.  From Ian’s QTH in the Clare Valley, to my portable location in the park, was a distance of about 200 kms.

Also made contact with John, VK5BJE/p who was operating from the Mylor Conservation Park.  This was John’s second park for the day.  I had worked him earlier in the afternoon before leaving home, when he was in the Sir Mark Oliphant CP in the Adelaide Hills.  Well done John on getting out and about and activating 2 parks. 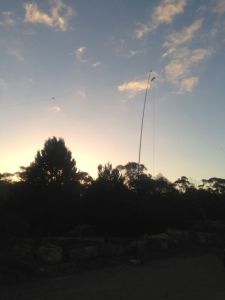 I also spoke with Brian VK5FMID down in Mount Gambier, who lowered his power down to 2 watts, and I lowered my power down to the lowest setting on the 817nd (half a watt), and we were able to comfortably talk with each other on 40m.

After the activity on 40m had slowed down, I slid over to 20m to see if I could pull in any DX, but I was sadly disappointed.  I could hardly hear anything coming in on the LP from Europe.  There were stations there but they were very light.  I had to run the antenna through the antenna analyser a few times, just to make sure I didn’t have a fault, but everything was okay.  I then heard a few Europeans comment that the band was poor, so that made me feel a little bit better.

Another great afternoon out.  Plenty of stations called in which is great and lots of interest in the VK5 Parks Award, which is even better.