My first park of the day was the Charleston Conservation Park which is situated on Bell Springs Road, at Charleston in the Mount Lofty Ranges ‘Adelaide Hills’.  The park is about 46 kms east of Adelaide, and about 25 kms north from my home qth.

Charleston is a beautiful little town, situated on the Onkaparinga Valley Road between Woodside and Mount Torrens,  on the main route from the Adelaide Hills to the Barossa Valley.  If you blinked, you would probably miss Charleston, as it has a pub, a General Store, and a few other businesses.  The Charleston Hotel enjoyed some national attention as one of the main props in a car advertisement, based on Slim Dusty’s famous song “Answer to a Pub With No Beer”.  Charleston is very close to the source of the Onkaparinga River, and was named for its founder, Charles Dunn, a brother of the prominent miller John Dunn.

I headed out early from home just after breakfast and was set up in the park just after 9.00 a.m.

The park which is about 56 hectares in size, preserves a pristine remnant representative of the transition between the wetter stringy bark forests on the western side of the Mount Lofty Ranges and the drier mallee woodlands to the east.  The park consists of open eucalyptus (blue gum) woodland with reasonably extensive areas of mature banksia, numerous acacia and grass trees.  The park is surrounded by farming land.  The park is in a near pristine condition despite its surrounds, having never been grazed.  A large diversity of flora and fauna are represented in the Park including at least seventy-six bird species.

Access to the park is via Bell Springs Road on the northern side of the park.  Take Newman Road which runs off Onkaparinga Valley Road, and travel east.  Then turn left onto Lewis Road, and Bell Springs Road is the first road on your right.  The park is a short distance up on your right.  There is a track which runs along the western boundary of the park, but this cannot be accessed in a vehicle as there is a locked gate on Bell Springs Road.  I parked my car near the gate and found a clearing about 50 metres in from the northern boundary. 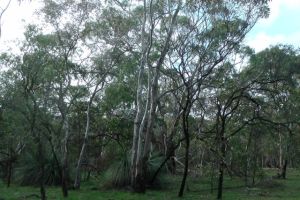 I strung up the dipole between some trees, with the centre supported by the 7 m squid pole.  There are plenty of options here for securing a dipole, as there are lots of trees.  The only problem is finding an area of cleared land, as the vegetation within the park is quite thick.  I made myself comfortable on my deck chair and put a few calls out on 7.100 with no takers.  But I was 15 minutes early from my posted activation time.  So I went down the band to 7.078 and checked in to the Riverland Radio Group, and spoke to Ron VK5MRE and Larry VK5LY, who both had beautiful signals. 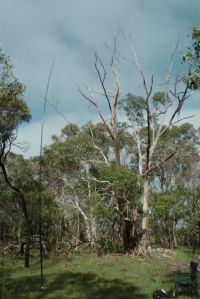 At 9.30 a.m. local time I moved back up to 7.100 and was called by regular ‘Hunter’ Brian VK5FMID.  This was followed by a call from Billy VK2NWC/8.  He was portable at The Olgas in the Northern Territory.  Although light in signal strength, Billy was perfectly readable.  Quite a surprise to work into VK8 on QRP at this time of the day.  This was followed by 7 QSO’s, including a few of the regular ‘Hunters’ Tom VK5EE, & Nev VK5WG.  John VK5FMJC called in to say hello from Crystal Brook.  John was QRP on just 5 watts and was a good strong 5/8. 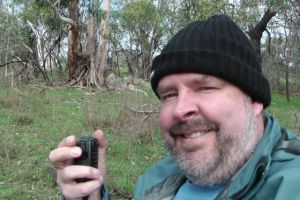