The third park of the day was the Cromer Conservation Park, which is situated on Cromer Road, north of Birdwood, which is the home of the National Motor Museum.

Cromer Conservation Park, which was proclaimed in 1976, is about 50 hectares in size.  Access to the park is via Cromer Road.  The park is surrounded on two sides by farming land, while Mt Crawford Forest (Radiata pine) is situated on the the other two sides.  The park consists of an open-forest formation of long-leafed box with Pink Gum and an open woodland formation of Red Gum.

Mining for yellow ochre occurred in the park during the 1800s. There are no formal walking trails or visitor facilities.

Kangaroos abound in the park.  Over 47 species of birds have been observed in the park including the endangered Yellow Tailed Black cockatoo.

I arrived at the park a little earlier than my scheduled activation time, so I set up the antenna and sat back on my deck chair and enjoyed my lunch.  The sun had come out by this stage and it was a really beautiful afternoon, despite it still being a little chilly. 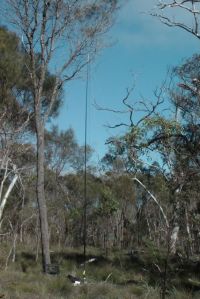 After lunch and a quick walk through the park I turned the radio on to 7.100 and found Larry VK5LY waited there for me.  This was followed by a few of the regular ‘Hunters’ including Brian VK5FMID, Andy VK5LA, Nev VK5WG, Tom VK5EE, and Col VK5HCF.  Terry VK3UP and Bernard VK3AMB called in again, and they appear to becoming regular ‘Hunters’ now, which is great.

I had 2 other enjoyable QSO’s with Ian VK3FD who was QRP, using just 2.5 watts from Melbourne, and Ken VK3HKV who was mobile on the Mornington Peninsula.

One thought on “Cromer Conservation Park”