I drove back along Coach Road, the turned left onto Ridge Road, and then along Stony Rise Road towards Ashton.  I then turned left onto Woods Hill Road and found a gate on the left leading into the park.  There was a good parking spot outside of the gate, so I left my car there.

The park consists of heavily wooded eucalyptus forest through steep gullies of the Mount Lofty Ranges ‘Adelaide Hills’.  The Heysen trail passes through the park.  As does the Yurrebilla trail which is an interpretative bushwalking trail through the Adelaide Hills area that is currently being developed by the Department of Environment, Water and Natural Resources.  The trail traverses some of South Australia’s most spectacular and interesting landscapes and provides a link between national and conservation parks in the central Mount Lofty Ranges.  The trail was launched by the Hon. John Hill MP, Minister for Environment and Conservation on 2 September 2003. 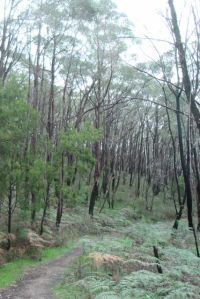 The Giles Conservation Park area was settled by Charles Giles, a pioneer of the horticultural and floricultural industry of South Australia.  He purchased the land while living at another property on South Road and walked to the Summit every Monday morning with his week’s provisions, returning home on Saturdays. There was no road up the valley of Third Creek at that time, and to reach his land the creek had to be crossed 21 times. Ruins of the workers’ accommodation huts, once part of an extensive nursery and orchard, can be seen.

Horsnell Gully, including the Giles section, was set aside as a conservation park in 1964 to conserve vegetation associations of the Hills Face Zone, including a number of rare and endangered plants species.  In 2007, the eastern section of the park was renamed Giles Conservation Park to honor the Giles family’s historical connections to the park.

I set up my gear just inside the park boundary and used the Giles Conservation Park sign to rest the Yaesu Ft-817nd on.  After erecting the 40m dipole on the 7m squid pole, I sat back in the deck chair and jumped onto 7.100, asking if the frequency was in use.  Only to be greeted again by Col VK5HCF and Larry VK5LY.  This was followed by a steady call from regular ‘Hunters from VK5 & VK3.

I spoke again with John VK5BJE who was still in the Mount George Conservation Park.  So that was some more Park to Park points. 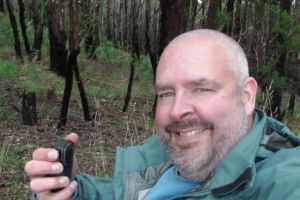 I operated for about half an hour again on 40m SSB and ended up with 18 QSO’s.

The weather was starting to get absolutely freezing, even though it was not quite 3.oo o’clock in the afternoon.  I lowered the antenna and adjusted the alligator clips and had a listen on 20m for any possible DX.  But my hands were starting to stiffen up from the cold, and as much as I like working DX, I decided to pack up the gear as it was just too damn cold !

After activating the park, I went for a walk through the park, to warm up and to explore.  I walked along a track, that was once the principal road into Adelaide from the east during the 1870s and 1880s.  There was a coach gate located on the highest point of ‘Coach Hill’, which is known today as the suburb of Skye.  The driver blew a trumpet to tell the settlers that he had been through the gate and they had to climb up to close it.  Near the spot where the power lines cross Coach Road, there was a hut for a ‘team’s keeper’ who kept fresh horses for the coaches.  Looking around me at the scrub, you can’t help but admire our pioneering history.  It must have been an incredibly interesting, but very difficult life.

Headed home to watch the end of the footy.  I shouldn’t have rushed home….the Adelaide Crows got beaten by our arch rivals, Port power, by just 3 points !

From Eurilla CP, I drove through the Piccadilly Valley, which is a premium market gardening area.  And then into the little town of Summertown and then on towards Ashton.  The Ashton area is renowned for its fruit orchards including cherries, apples, pears, and lemons.  I turned left from Woods Hill Road, into Coach Road. 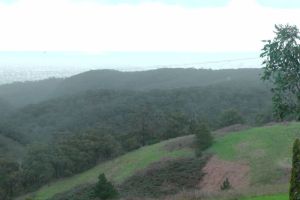 The Horsnell Gully Conservation Park is located about 10 kilometres east of Adelaide in the rugged terrain of the Mount Lofty Ranges.  The 245-hectare area was once farmland owned by the Horsnell and Giles families, and ruins can be found throughout the park and the adjacent Giles Conservation Park.

Today, Horsnell Gully and Giles Conservation Parks are important links in the fragmented band of natural woodland along the Mount Lofty Ranges.  There are excellent opportunities for bushwalking, birdwatching, photography, painting, nature study, and mountain biking (as I found out).

Prior to European settlement, the Kaurna (Gar-na) people spent the winter months in locations such as Horsnell Gully and Giles, using the wood and bark from the woodlands for fire, warmth and shelter.  During summer they lived on the coast, taking advantage of cool, ocean breezes.

John Horsnell, once coachman to Governor Gawler, settled the gully in 1842, establishing market gardens and orchards of walnut, Osage orange and olive trees – remnants of which can still be seen today.  He established an English cottage garden that included roses, violets and agapanthus, and the first dairy in South Australia.

In 1860-61, a house of local sandstone was built and, at one time, housed 14 children. The house remains and a coach house, stable and milking shed can also be found nearby. These ruins are well-maintained and represent one of the earliest farms in the area.

Horsnell Gully, including the Giles section, was set aside as a conservation park in 1964 to conserve vegetation associations of the Hills Face Zone, including a number of rare and endangered plants species.  In 2007, the eastern section of the park was renamed Giles Conservation Park to honor the Giles family’s historical connections to the park. 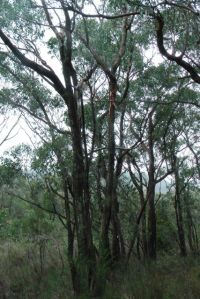 I parked the car at Gate 3, and set up the gear on a dirt track near the entrance gate.  Fortunately I didn’t have to walk too far, as the weather was turning ugly.  I could see a lot of black clouds out to the west as I looked down the gully towards Adelaide.

I set up the dipole and the deck chair and I jumped onto 7.100 and asked if the frequency was in use, only to get called straight away by Col VK5HCF, Brian VK5FMID, and Larry VK5LY.  These three fellas are dedicated ‘Hunters’ and always seem to feature in my log.

I had a good QSO with Greg VK2FGJW who was portable up in the Blue Mountains.  I also spoke with Ian VK3FNBL who was operating QRP with just 5 watts (5/6 sent and 5/8 received).  And Matt called in again, VK5MLB.  This time he was mobile west of Parndarna on Kangaroo Island.

I also managed a Park to Park contact with John, VK5BJE, who had indeed braved the elements, and was operating portable in the Mount George Conservation Park.  John was a good strong 5/8 signal and I received a 5/8 back from John.

Whilst in the park I had a chat with a few lads who were mountain biking.  They were making the journey up from Skye.  There was also a group of about 8 people who I think were ‘Friends of the Park’ or something similar.  One of them saw my squid pole and believe it or not asked me if I was catching birds.  I explained to him all about the hobby of amateur radio and he seemed ok then.

Off to the next park, the Giles Conservation Park.

This morning at late notice I decided to head out and activate 3 Conservation Parks.  The weather was beautiful at Mount Barker….nice and sunny, and that was the forecast for the day.  But unfortunately that did not last long, and by the end of the day it was absolutely freezing.  But luckily no rain.

My first park of the day was the Eurilla Conservation Park.  I never knew until this morning when checking the internet, that this park even existed.  Eurilla CP is located about 16 kms south east of Adelaide.  It is located just off the eastern side of Summit Road, which leads to the Mount Lofty summit.  The park is situated on the northern border of the Mount Lofty Botanic Garden, and opposite the Cleland Conservation Park. 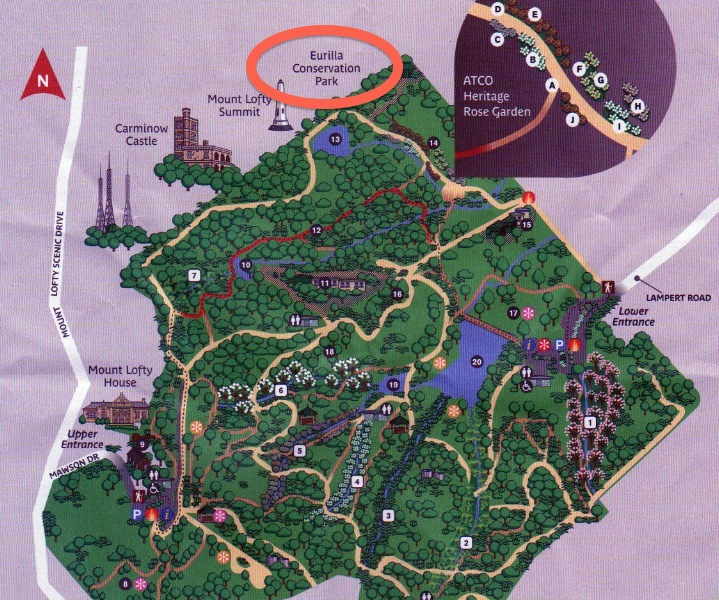 You cannot access the park via Summit Road, and there are no roads leading into the park.  I accessed the park via the Mount Lofty Botanic Garden.  I entered the Garden via the lower carpark off Lampert Road, and then walked about 4 kms through the garden, and into the park.  It took a bit of climbing and fence jumping, but I eventually got there.  Below is a photo looking through the Garden up towards the CP.  The three TV transmitter towers are in the background. 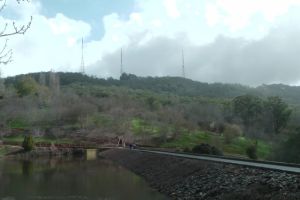 The Eurilla Conservation Park consists of thick eucalyptus forest.  However the main feature and the reason for the park being dedicated is an undisturbed bog consiting of a dense mat of the rare coral fern and a large colony of mature king fern, an endangered species in South Australia.  These specimens are amongst the finest in the State.

The park was named in honour of Warren Bonython, one of the members of the famous South Australian Bonython family.  They lived nearby in ‘Eurilla’ mansion, which was built in1884, but was burnt to the ground during the 1983 Ash Wednesday bushfires.

I found a fallen log and used this as a seat, and also to prop the 7 m squid pole against, and secured it with some octopus straps.  My i-phone was bleating at me from the SOTA Goat application, so I was keen to get the antenna up and get on air.  There were plenty of options in the park re stringing up the ends of the dipole.  Lots of tall gum trees. 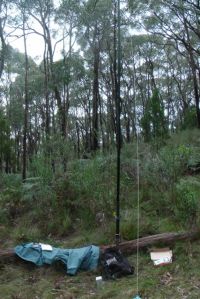 My first contact of the day was with Tony, VK3CAT who was portable on Mount Dandenong summit VK3/ VC-025.  This was Tony’s first SOTA activation, and he had a nice 5/7 signal and I received 5/8 back.  So that was a good start.  I then QSY’d up to 7.100 and put a call out and worked Larry VK5LY, Brian VK5FMID, and then John VK5BJE.  John advised that he was considering going out in the afternoon to activate the Mount George Conservation Park and possibly the Belair National Park.  So there were a few more Park to Park opportunities for me.

This was followed by a number of the regular ‘hunters’, all of whom had very good signals.

Matt, VK5MLB gave me a call from the Seddon Conservation Park on Kangaroo Island, and I got excited believing I had another Park to Park for my log.  But alas, Matt was working from his car, whilst in the Seddon CP, so it didn’t qualify.

But I did work John VK5FMJC who was portable in the Clements Gap Conservation Park, on his very first VK5 Parks activation.  John was using his little FT-817 and just 5 watts and was an excellent 5/9 signal into the Mt Lofty Ranges.  Congratulations John.